A Short History of the Missing Universe

Astronomers have known where the universe’s missing matter has been hiding for the past 20 years. So why did it take so long to find it? 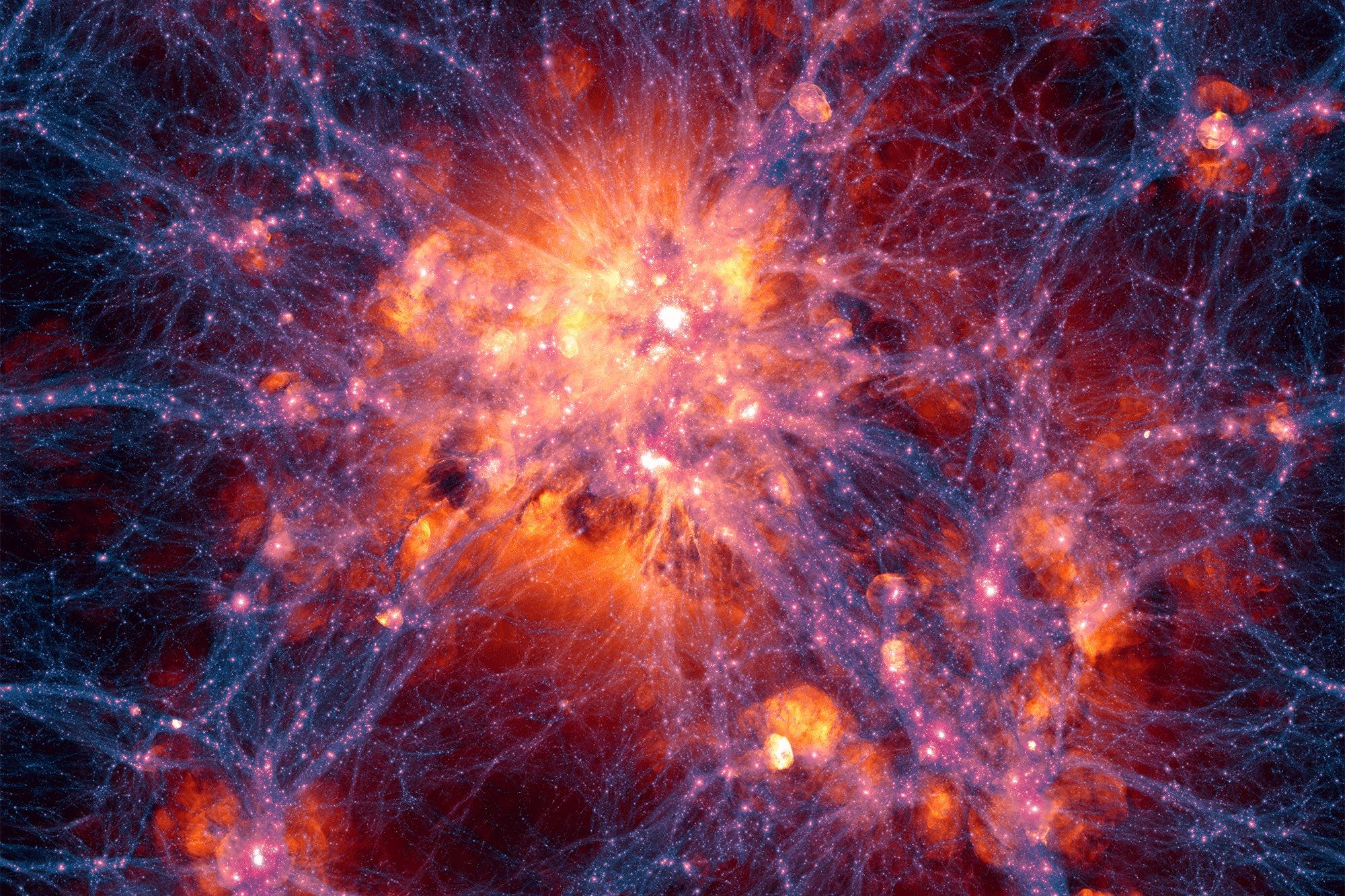 The cosmos plays hide-and-seek. Sometimes, though, even when astronomers have a hunch for where their prey might hide, it can take them decades of searching to confirm it. The case of the universe’s missing matter—a case that appears to now be closed, as I reported earlier this month—is one such instance. To me, it is a fascinating tale in which clever cosmological models drew a treasure map that took 20 years to explore.

Scientists knew back in the 1980s that they could observe only a fraction of the atomic matter—or baryons—in the universe. (Today we know that all baryons taken together are thought to make up about 5 percent of the universe—the rest is dark energy and dark matter.) They knew that if they counted up all the stuff they could see in the universe—stars and galaxies, for the most part—the bulk of the baryons would be missing.

But exactly how much missing matter there was, and where it might be hiding, were questions that started to sharpen in the 1990s. Around that time, astronomer David Tytler of the University of California, San Diego, came up with a way to measure the amount of deuterium in the light of distant quasars—the bright cores of galaxies with active black holes at their center—using the new spectrograph at the Keck telescope in Hawaii. Tytler’s data helped researchers understand just how many baryons were missing in today’s universe once all the visible stars and gas were accounted for: a whopping 90 percent.

These results set off a firestorm of controversy, fanned in part by Tytler’s personality. “He [insisted] he was right in spite of, at the time, a lot of seemingly contradictory evidence, and basically said everyone else was a bunch of idiots who didn’t know what they were doing,” said Romeel Dave, an astronomer at the University of Edinburgh. “Turns out, of course, he was right.”

Then in 1998, Jeremiah Ostriker and Renyue Cen, Princeton University astrophysicists, released a seminal cosmological model that tracked the history of the universe from its beginnings. The model suggested that the missing baryons were likely wafting about in the form of diffuse (and at the time undetectable) gas between galaxies.

As it happens, Dave could have been the first to tell the world where the baryons were, beating Ostriker and Cen. Months before their paper came out, Dave had finished his own set of cosmological simulations, which were part of his Ph.D. work at the University of California, Santa Cruz. His thesis on the distribution of baryons suggested that they might be lurking in the warm plasma between galaxies. “I didn’t really appreciate the result for what it was,” said Dave. “Oh well, win some, lose some.”

Dave continued to work on the problem in the years to follow. He envisioned the missing matter as hiding in ghostly threads of extremely hot and very diffuse gas that connect galaxy pairs. In astro-speak, this became the “warm-hot intergalactic medium,” or WHIM, a term that Dave coined.

Many astronomers continued to suspect that there might be some very faint stars in the outskirts of galaxies that could account for a significant chunk of the missing matter. But after many decades of searching, the number of baryons in stars, even the faintest ones that could be seen, amounted to no more than 20 percent.

More and more sophisticated instruments came online. In 2003, the Wilkinson Microwave Anisotropy Probe measured the universe’s baryon density as it stood some 380,000 years after the Big Bang. It turned out to be the same density as indicated by the cosmological models. A decade later, the Planck satellite confirmed the number.

With the eventual failure to find hidden stars and galaxies that might be holding the missing matter, “attention turned toward gas in between the galaxies—the intergalactic medium distributed over billions of light years of low-density intergalactic space,” said Michael Shull, an astrophysicist at University of Colorado, Boulder. He and his team began searching for the WHIM by studying its effects on the light from distant quasars. Atoms of hydrogen, helium, and heavier elements such as oxygen absorb the ultraviolet and X-ray radiation from these quasar lighthouses. The gas “steals a portion of light from the beam,” said Shull, leaving a deficit of light—an absorption line. Find the lines, and you’ll find the gas.

The most prominent absorption lines of hydrogen and ionized oxygen are at very short wavelengths, in the ultraviolet and X-ray portions of the spectrum. Unfortunately for astronomers (but fortunately for the rest of life on Earth), our atmosphere blocks these rays. In part to solve the missing matter problem, astronomers launched X-ray satellites to map this light. With the absorption line method, Shull said, scientists eventually “accounted for most, if not all, of the predicted baryons that were cooked up in the hot Big Bang.”

Other teams took different approaches, looking for the missing baryons indirectly. As my story from last week shows, three teams, including Shull’s, are now saying that all the baryons are accounted for.

But the WHIM is so faint, and the matter so diffuse, that it’s hard to definitely close the case. “Over the years, there have been many exchanges among researchers arguing for or against possible detections of the warm-hot intergalactic medium,” said Kenneth Sembach, director of the Space Telescope Science Institute in Baltimore. “I suspect there will be many more. The recent papers appear to be another piece in this complex and interesting cosmic puzzle. I’m sure there will be more pieces to come, and associated debates about how best to fit these pieces together.”

Lead image: Simulations of the universe’s large-scale structure hinted at where the universe’s missing matter might be. Credit: Illustris Collaboration