A Wrinkle in Nature Could Lead to Alien Life

There may be more than one way to tune a universe for life. 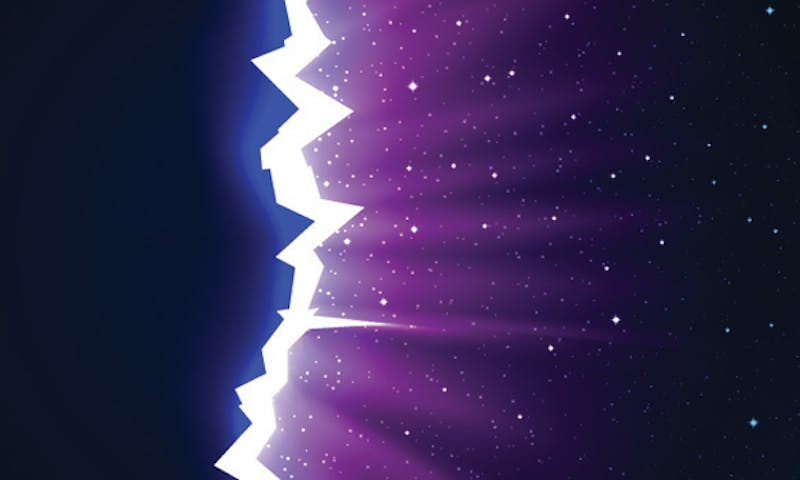 I grew up in a small village in a very rural part of England. It was a landscape capped with the huge skies of a low-lying coastal zone. Gently rolling fields, long hedgerows, and a lot of farms. Some of the people running those farms came from so many generations that they could point to the sites of their forebears’ land-working going back over four centuries. As a child it was fascinating to hear the farmers reflect on the profound changes wrought to that land and their little-concealed wonderment at their ancestors for coping without the accoutrements of the modern world that so many of us benefit from. It seems that, for those long-past generations, the rules of existence were fundamentally different.

Today, we face a similar puzzle when we look out across the cosmos that spawned us to speculate about the nature of alien lineages. Our own planet wasn’t always the way it is today, and a bewildering variety of body plans and biochemical strategies have already arisen and gone extinct. We simply don’t know whether the experimentations of Darwinian evolution on exoplanets and distant galaxies are destined to converge to strategies familiar to us. Either now, or in the future of an ever-faster expanding universe.

Our fairytale concepts of “galactic empires” could be woefully too conservative.

The deep, inconvenient truth is that despite many imaginative proposals, it is entirely possible that we are missing vital parts of the bigger picture. Just like farmers marveling at the changing rules of the land, we may need to more fully embrace the fact that the prospects and rules for life in the universe have not always been the same, and almost certainly won’t be the same in the future.

For one thing, if you were an advancing species some 12 billion years ago (an era where there’s reason to think that biological life as we know it might have already been possible) the ultimate scope for knowledge, and for physical exploration, was profoundly different than it is today, or than it will be hundreds of billions of years from now.

In a recent work, the philosopher Toby Ord, author of The Precipice: Existential Risk and the Future of Humanity, looked to clarify the nature of the boundaries lifeforms face in an expanding, accelerating cosmos.1 For a species like us, there are boundaries of what is knowable: the presently observable universe (from which light has now reached us), and the eventually observable universe (from which light will eventually reach us). There are also more restrictive, smaller boundaries of causality or exploration. The affectable universe is the volume that we could in principle interact with by sending pulses of light or near lightspeed probes. And the ultimately observable universe is the enlarged volume of the universe from which those near lightspeed probes could glean information for us.

A critical feature of these cosmic boundaries, Ord points out, is that, from the perspective of any species’ origin point, there will be regions of the universe that can never observe or influence each other. These are causally non-overlapping parts; a profound kind of “fragmentation” of reality on very large scales, wrought by increasingly rapid cosmic expansion and the finite speed of light.

For a hyper-advanced species, for whom interstellar and intergalactic travel is easy, this ultimate isolation of their territory might actually be an encouragement to occupy it all. At some point there will be no more competition, no possible intrusion into the heartland of your fragment of the cosmos, so why not fill every corner? In other words, our fairytale concepts of “galactic empires” could be woefully short of the mark, being far too conservative. The real empires will span their own once and future causal fragments of the universe. Conceivably these could encompass billions of galaxies, but only under certain conditions, as I’ll explain.

The truly peculiar thing is that the scope of these fundamental boundaries and fragmentations are also not going to be the same for everyone. During the first 7 to 8 billion years after the Big Bang, the universe’s expansion was slowing, until the phenomenon that we label as dark energy began accelerating it. A species in those first several billion years might not be aware of this impending change in cosmic dynamics, and consequently might have a different outlook, deducing that they lived in a much more accessible universe encompassing many more galaxies. Critically, even as the cosmic expansion evolved, they would come to find that they really did have a measurably special head start.

We can see this by looking at two extremes: In 150 billion years or so from today, the accelerated expansion of space means that we (or a species in our place) will no longer be able to observe or access much more than our own Local Group of galaxies, even with close-to-light-speed travel. That amounts to a few dozen galaxies, mostly diminutive dwarfs. But life existing just a few billion years after the Big Bang, in that earlier lull period, would have far greater access to its surroundings, with literally billions of reachable galaxies if they set out promptly enough. It’s a difference not unlike finding yourself out on a near endless steppe, as opposed to being nestled in the shires and villages of a densely packed land.

If any of these parameters drifted a teeny bit there would be consequences throughout physical reality.

If the lineage of such a species still existed today, they could have not only accumulated a vast expanse of cosmic territory (and technological advancements that are hard to imagine), they would have always faced a future of different opportunities than any species coming after. The dispersal ability of an early pioneer species could also lead to a dramatic type of founder effect—the reduced genetic diversity due to a limited ancestral population—further amplifying the differences between ancient species and cosmic newcomers.

You can imagine that by picturing a hardy and fertile plant with airborne seeds. One of those seeds gets carried across an ocean to a new, unvegetated continent where it germinates and becomes the founder species for plant life. Even after millions of years of evolution, that continent has less genetic diversity in its flora because of its single common ancestor. Float different seeds in interstellar probes across the cosmos and eventually, in Star Trek-style, life in one enormous region might look, act, and be pretty much the same, while elsewhere it could be drastically different.

That’s not the only extreme variance that could apply to alien life though. Within the framework of our standard model of particle physics, there are theoretical possibilities for the fundamental parameters of nature to vary, according to both time and environment. For instance, electron energy levels in atoms depend on the relative values of Planck’s constant, the electrical charge of an electron, the speed of light, and the permittivity of free space (the ease with which electric fields penetrate a vacuum): together forming a dimensionless quantity called the fine-structure constant. If any of these parameters changed, or drifted a teeny bit, there would be consequences throughout physical reality.

All of chemistry—and even the very possibility of organic chemistry—depends on these numbers. Shift the fine-structure constant lower by just a few percent and we don’t think that stars would manage to make any carbon at all in the cosmos. Increase the fine-structure constant and the essential covalent bonds between atoms in molecules become weaker,2 and the biochemically critical hydrogen bonds (such as those between base-pairs in DNA) also weaken. Similarly, increase the electron-proton mass ratio and the dissociation energy—the energy involved in breaking and making molecular bonds—goes up.

Astronomers and physicists have looked for evidence of tiny variations in these fundamental constants using the frequencies of photons emitted or absorbed in atoms and molecules billions of light-years away, and by using precise timekeeping devices and exquisitely sensitive experiments here on Earth. To date we’ve seen little sign of change. Temporal differences in the fine-structure constant across the past 12 billion years or so appear to be less than about 1 part in 1,000,000 or 1 part in 100,000—depending on whose experimental results you reference. Intriguingly though, some recent analyses do hint at a modest variation between cosmic locations.3

But there are also severe restrictions in how far back in time we can probe and in what environments we can measure these constants. Room exists for future surprise. And even a 1 part in 1,000,000 drift across 10 billion years could add up to a much more significant change a few trillion years into the future—further modifying the prospects for life and for what is left of life’s incubators, from planets to the most long-lived stars.

There is also potential for the effect of the tiniest of variations in fundamental constants to be hugely amplified through the extraordinary complexities and dependencies of known biochemistry and evolutionary change. It is conceivable that minute differences in the “tuning” of reality for life that started 10 billion years ago would direct molecular evolution and strategies in directions quite unlike those favored today.

Hypothetically, a tiny shift in molecular bond strengths that is enough to alter reaction rates and the structural properties of proteins, but not render them impossible, could drive natural selection at this microscopic level into regions of a chemical landscape inaccessible today. Nature could “discover” novel macromolecular structures and shortcuts—different enzymes and alternate functions, and entirely different types of complex cellular architectures that persist even as the fundamental parameters continue to change.

Even without these exotic possibilities, we know for sure that the environmental properties of the universe have changed since those same early times. During the period when biochemistry could have first got underway—some 100 million years after the Big Bang—the heaviest elements were woefully scarce as the first generations of stars forged new atomic nuclei.

Bereft of those atoms, terrestrial-sized planets might have wound up as “carbon worlds,”4 chemically rich in some ways, but with a severe shortage of some of the heavier elements that today’s life fully relies on. Life could have gotten going, but with different restrictions and imperatives. Hypothetically, such early living systems might be supreme and voracious scavengers, sifting and seeking biochemically precious atoms, like zinc or iron, for the evolutionary advantages they confer when built into life’s molecular structures. Once again, the descendants of that life could differ from more recently emerging species in ways that are both profound and a little terrifying—more efficient and vastly more tenacious.

The fact is that “alien” (a word rooted in the Latin alius, meaning “other”) may not be a sufficiently strong term for capturing the full divergence of process-driven, evolving phenomena that could be scattered across the universe to bewilder us even more than we’re bewildered by our own ancestors, be they farmers or otherwise. Life with a lineage that started in a universe of radically different outlook, and conceivably different rules, could be unspeakably novel, hyper-alien and hyper-surprising.

Caleb Scharf is an astrophysicist and the director of astrobiology at Columbia University in New York. His latest book is The Ascent of Information: Books, Bits, Genes, Machines, and Life’s Unending Algorithm, coming in June 2021. Follow him on Twitter @caleb_scharf.

This article first appeared online in our “Universality” issue in April, 2021.