Once, it was different. Once, people had homes and parents and went to schools. Cities existed within countries and those countries had leaders. Travel could be for adventure or recreation, not survival. But by the time I was grown up, the wider context was a sick joke. Incredible, how a slip could become a freefall and a freefall could become a hell where we lived on as ghosts in a haunted world.

Once, at the age of eight or nine, I had still wanted to be a writer, or at least something other than a refugee. Not a trap-maker. Not a scavenger. Not a killer. I filled my notebooks full of scribbles. Poetry about how I loved the sea. Retellings of fables. Even scenes from novels I never finished and will never finish. Borne could have been a creature out of those childhood fictions. Borne could have been my imaginary friend.

I rationalized later that this is why I told Borne about my past. But maybe it could have been anyone, in that moment.

I was born on an island that fell not to war or disease but to rising seas. My father was a politician of sorts—a member of the council that ruled the largest island of the archipelago. He liked to fish and build things in his spare time. He collected old nautical maps and liked to find the errors. He had a boat that he built himself called The Turtle Shell. He used to take my mother out for “floating picnics” while he courted her, land just a dot on the horizon.

My mother had been born on the island, too, but her people came from far away, from the mainland, and it was a scandal when the two of them married because it wasn’t ever done. That scandal gave me my name, Rachel, because it came from neither family but from outsiders. A compromise.

My father led us to another island: whether from an impulse futile or courageous or both, he meant to re-create what he had known.

My mother was a doctor who took care of infants. She was quick to smile and laugh, perhaps too quick because she would laugh when nervous or distressed, too. I could see my father observe her carefully, perhaps to make sure of the difference. She liked the spicy food of her family’s homeland and took up making little models of ships. She would playfully mock my father’s fascination with boats using her models. Scale versions with toothpicks. Like my father, she loved to read and books surrounded me growing up.

We had what we wanted and more. We knew who we were. But that could not stop the rising seas, and one by one the smaller islands around us winked out of existence. We could see their lights at night with our telescope, standing on the shore. And then came the nights when we could no longer see those lights. We had known before that, but after that we put away the telescope.

I was only six when we left, boarding a ship as refugees. I remember because my parents told me the stories as I grew up. They told me the stories even as we continued to be refugees, moving from camp to camp, country to country, thinking that we could outrun the unraveling of the world. But the world was unraveling most places.

I still have vague memories of the camps. The ever-present mud churned to muck by overcrowding, of mosquitoes so thick you had to keep your mouth shut, of extreme heat balanced later by extreme cold. The fences and guard dogs that always seemed better tended to than the tents. The new papers we needed to apply for, the old ones that were never good enough. The cast-off biotech they shoveled into troughs for us and the way phones and other devices became extinct over time. The feeling of always being hollowed-out and hungry. Sickness, and always having a cold or being feverish. The people on the outside, the guards, were the same as us, and I didn’t understand why they should be on the outside and we should be on the inside.

But also I remember my parents laughing and sharing things about our home as I became old enough to appreciate them. Photographs, a ceremonial bowl my father insisted on lugging with us, my mother’s handmade jewelry, a photo album. Every time we moved and started over, my father would build things: tents or enclosures or vegetable gardens. My mother would pitch in and tend the sick, even though the countries we lived in didn’t recognize her medical license. Was it selfless? They were fighting for their lives, their identities. So, no, it was not selfless, but it helped people.

My father must have been cheery for my sake, for my mother’s sake. She might one day be able to return to a homeland. He could not, and it was rare we met anyone who had lived on the island. The stories he told became boring to me through repetition, but I understand now that he was just trying to fix that place with the compass of his memories.

Throughout all of this, my parents did not forget my education. Not a formal education but the education that mattered. What to value. What to hold on to. What to let go of. What to fight for and what to discard. Where the traps were.

Once, we found a kind of peace. My father led us to another island: not the same, not at all, but whether from an impulse futile or courageous or both, he meant to re-create what he had known. We had a good life there for almost two years. A city to live in, a beach to walk on, a botanical garden, a school, playing with children who looked like me. We lived in a little two-room apartment and my dad built in the backyard an outrigger canoe with a cannibalized motor. My mother became a doctor again, working in return for goods.

Every so often information came from the mainland that whatever might have been bad was getting worse, but my parents withheld any news from me for as long as they could, as best as they were able. Until, one day, shock: We were herded by soldiers via a crowded, diesel-spewing ferry to the mainland and another camp. The green-blue water and my father’s boat and our apartment were gone.

My last memories from before the city were of floods and makeshift rafts and the expanding silence of people dead or dying in the water.

It got worse after that, not better. It got worse and kept getting worse until we didn’t even have the camps. It was just us, trudging across a land that held pockets of sanity and insanity both. Kindness and cruelty, sometimes from the same source. My father carried a knife in his boot and took turns with my mother holding on to a small revolver. We were as likely to come across burned and half-buried bodies in a ditch as a farmer and his sons armed with shotguns. Once, a grinning man invited us into his house and tried to rape my mother. My father had a scar across his left arm after that and we would stay off the main roads.

We starved at times rather than join the ranks of those marching toward an illusion, that slow, tired trudge. The back roads we took would become reduced to gray snakes against the blackness of forest or scrubland. In the distance, lights of a cabin or of a town would invoke in us dread and then caution, followed by avoidance.

Months after we had stopped believing in refuge, there appeared on a distant hill a city so miraculous it looked at dusk like a huge crystal chandelier that had fallen to Earth or a stranded ocean liner listing on its side. I could not keep my eyes off of it and pleaded with my parents to go there. They ignored me. They were right to. It lay on our horizon for several days, and during the night of the ninth day, having rounded its eastern side, still fighting our way through forest and plain, it caught fire, all of those sparkling lights taken up in a huge conflagration that burned the darkness away for miles around.

There came the blinking red hazard lights of bombers flying away from the city, and we so far down below marveled at the sight because it had been years since we had seen a plane of any kind. Something so old and so new. We wondered if airplanes might mean some resurgence, that some resurrection of a normal life might be upon us. But it was just an illusion. It meant nothing.

We made our way quickly more eastward still, fearing the exodus of the survivors as if it were a wave that might drown us, and yet they were no different than us. Then came the thick, powdery black smoke during the days, gathered up in the sooty rain that fell, and out of the ground came writhing worms and rabbits and other dying things.

Soon we would think back kindly on those days. But throughout it all, my parents held on to hope, kept trying to find a safe place. They would not give up. They never gave up. I knew that, even now that they were gone.

There was more that I told Borne, but I can’t bring myself to write it, because it is too terrible to put into words. And it pushes up against the one thing I couldn’t remember: how I came to this city, what had happened to my parents. My last memories from before the city were of floods and makeshift rafts and the expanding silence of people dead or dying in the water—and a hint of land on the horizon. My last memories were of going down for a second, third time, my lungs full of silt.

But when I came to, I was in the city, walking. I was walking by the river as if I had always been there.

Jeff VanderMeer is the author of the New York Times-bestselling Southern Reach trilogy, which won the Shirley Jackson Award and Nebula Award. His nonfiction has appeared in The New York Times, The Guardian, the Atlantic.com, Vulture, Esquire.com, and The Los Angeles Times. He has taught at the Yale Writers’ Conference, lectured at MIT, Brown, and the Library of Congress, and serves as the co-director of Shared Worlds, a unique teen writing camp. 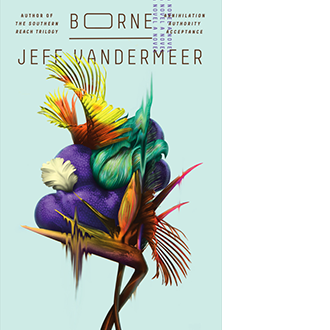 Excerpted from Borne by Jeff VanderMeer, published by MCD, an imprint of Farrar, Straus and Giroux. Copyright © 2017 by VanderMeer Creative, Inc. All rights reserved. 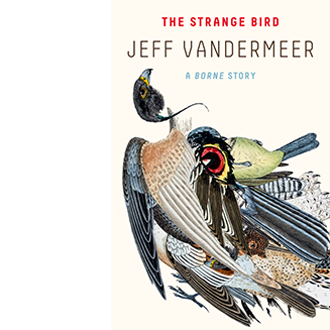 The Strange Bird—from New York Times bestselling novelist Jeff VanderMeer—is a novella-length digital original that expands and weaves deeply into the world of his novel, Borne. It will be released on August 1, and is available for preorder now.