A rock trio on the rise is raising environmental awareness. 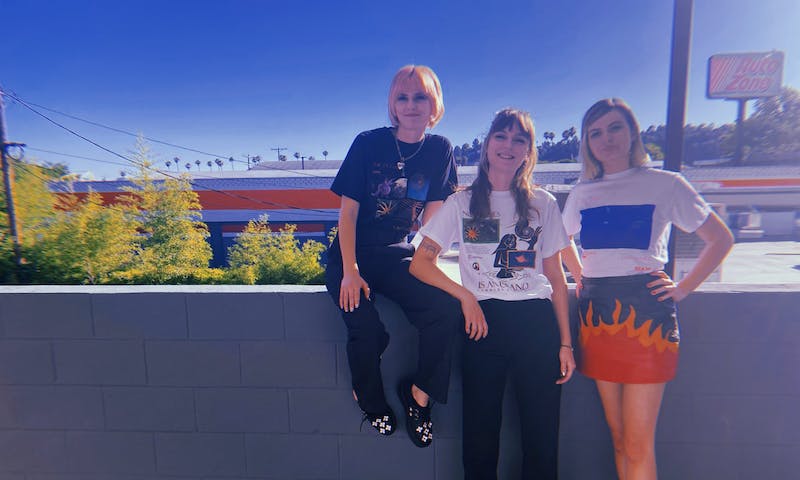 What’s enchanting about our oceans is how unexplored they still are, teeming with unknown species. Scientists add, on average, around 2,000 new entries to the World Register of Marine Species every year. It can be profoundly moving to fathom the scale of sea life and the strange forms it can take.

The sobering reality is that, because of human activities and climate change, much of ocean life is threatened. In April 2022, a Science study made headlines for concluding that, if carbon emissions accelerate, the amount of ocean species dying off would “culminate in a mass extinction rivaling those in Earth’s past.” Who doesn’t find it more than disheartening to imagine such a source of wonder forever fading from view?

Artists around the world are channeling their distress into works that can be sad or angry, beautiful or frightening. Or, in the case of Automatic, a rising rock trio from Los Angeles, works you can dance to.

“It’s crazy to me that things still continue day to day in a normal way when we have scientific proof that our oceans are dying,” Izzy Glaudini, Automatic’s lead singer, tells Nautilus. “It just blows my mind.” In “Teen Beat,” a song from Automatic’s new album, Excess, Glaudini sings, “Your feet in the water, the fear coming for you.”

Feeling fed-up and shocked at people’s passivity charges the trio’s infectious songs, driven by taut beats. In tune with Automatic’s new album Excess, Glaudini and her bandmates, Lola Dompé and Halle Saxon, have joined Nautilus Ocean, the ocean initiative of Nautilus magazine, and the clothing brand Jungles, to raise money for ocean research.

While on tour, the band members will be sporting Jungles apparel that showcases unique ocean imagery from the Schmidt Ocean Institute, a nonprofit foundation to advance oceanographic research, discovery, and knowledge. That imagery includes insights from an essay by Roger Payne in Nautilus Ocean, “No Species Is an Island”: “We have always put the needs of humans before the needs of the rest of life. It is our fatal flaw.” The biologist and environmentalist is renowned for recording humpback whale songs in 1967. His album, Songs of the Humpback Whale, remains the bestselling environmental album in history.

With its new album, Automatic prods listeners to face the climate change that’s arrived and still coming. “It’s best to take the idea that there is hope, and that there’s something that we can do, until the last minute,” Saxon says. “The catastrophe is already starting. It’s here. We’re looking at it. And it’s not going to slow down unless we all put in fast, hard, dedicated work right now.”

You can join the effort. Purchasing Nautilus Ocean/Jungles apparel helps support charities and organizations focused on 30×30, a worldwide initiative for governments to designate 30 percent of Earth’s oceans as protected areas by 2030.

For Automatic, Excess is their way of keeping the conversation about our climate, and the feelings we have about this environmental crisis, alive. “That is the main goal with this album, to say, ‘Hey, we need to keep talking about this and thinking about this constantly, every day,’” Saxon says. “We were processing our emotions about it through our music with the intention of sending it out there to people to hopefully also give them a space to process their emotions about it.”

Glaudini thinks that perhaps, in a weird way, it can be comforting to listen to music that reflects your anxieties. “This climate anxiety is something that every single person can relate to,” she says. Focusing on concrete ways to help others is also a good way of relieving anxiety. By supporting 30×30 with a purchase from Nautilus Ocean/Jungles, you can help conserve our oceans and remind others that our oceans are full of wonders, with many parts unknown awaiting to be discovered. “To me,” Dompé says, “we can’t have anything if we don’t have our oceans.”