Dark Matter Gets a Reprieve in New Analysis

A strange glow coming from the Milky Way’s center was thought to be due to ordinary pulsars. But a new look at a years-old study shows that dark matter might still be responsible. 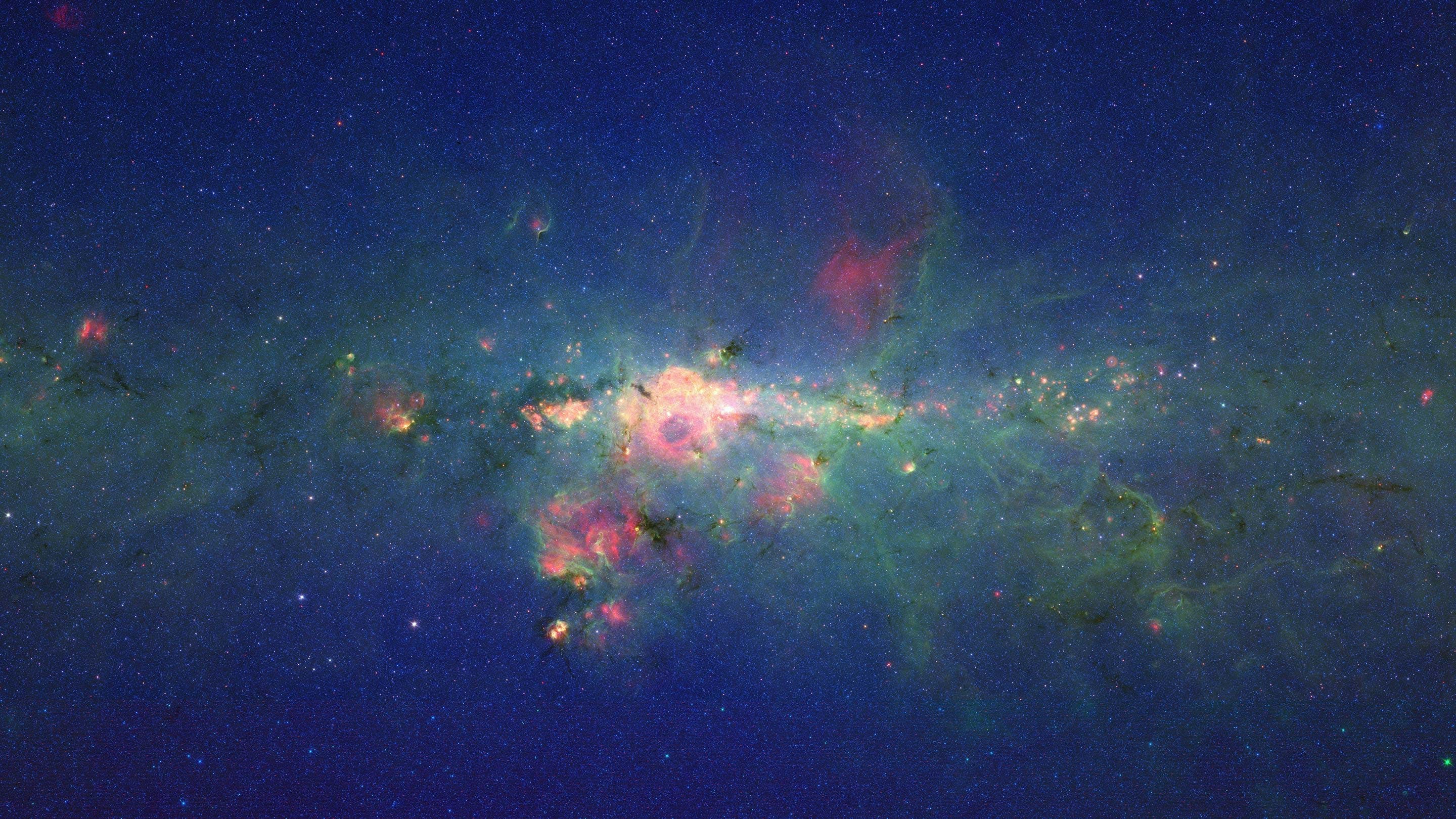 The galactic center shines too brightly, like the glow of a metropolis at night where maps show only a town. To mend their cosmic cartography, astrophysicists have spent years debating what could be powering this excess of energetic light. In 2015 the arguments appeared to swing decisively in favor of a somewhat prosaic explanation—that a large population of dim neutron stars was responsible. But a new examination of that work, posted on the scientific preprint site arxiv.org earlier this month, revealed a likely flaw in those analyses. “There’s something happening in the data we don’t understand,” said Rebecca Leane, a theoretical physicist at the Massachusetts Institute of Technology and co-author of the paper.

The new study, along with two others that came out in March, reopens the possibility that space-based instruments have found the first direct evidence of the elusive “dark matter” thought to pervade the universe.

The problem first appeared in 2009, when Dan Hooper, an astrophysicist at the University of Chicago, and Lisa Goodenough, then a graduate student at New York University, noticed that NASA’s Fermi Gamma-ray Space Telescope appeared to be picking up too many of the energetic photons known as gamma rays.

He suggested the anomaly could originate from a theoretical jumbling throng of dark matter particles in the galaxy’s center. While dark matter doesn’t shine or fraternize with known particles, in the right sort of collision these particles could annihilate in a shower of familiar matter and antimatter that would then go out with a puff of gamma rays. A measurement of these offshoots would represent the first evidence of dark matter that wasn’t exclusively gravitational in nature.

Yet dark matter wasn’t the only thing that could be generating the excess gamma rays. They could shine from cosmic lighthouses known as millisecond pulsars—magnetically charged neutron stars that make a thousand turns each second. A group of undiscovered pulsars too dim to be picked out individually could be bathing the center of the galaxy in extra gamma rays.

Now Leane and Tracy Slatyer, a theoretical physicist at MIT and a co-author of one of those 2015 pulsar studies, have breathed some life back into the dark matter option.

First, the duo cooked up a digital representation of the Milky Way galaxy. They added the known ingredients: stars, gas, dust, and known pulsars. Then they included the hypothetical ingredients—not only a sizable helping of dark matter but also some additional small pulsars that were unaccounted for in the initial mockup. They studied this fake Milky Way using the same methods from 2015, to see if they could find the dark matter. Ultimately they learned that the unexpected pulsars threw off the analysis, leading to the erroneous conclusion that this dark matter–stuffed galaxy had little dark matter.

The digital Milky Way served as a proof of concept for how surprising additions could shift results, but to see if something similar might be affecting the real galaxy, Leane and Slatyer added mock dark-matter data to actual Fermi data. But again, they found that their data analysis did not correctly identify the added dark matter. Instead it gave too much credit to grainy, pulsar-like points. And the more dark stuff they added, the more the model mistook that dark matter for pulsars. The technique failed to sniff out any of the fake dark matter until the researchers had injected enough to account for the observed gamma-ray glow five times over.

Their conclusion: The earlier analysis was never going to find dark matter, regardless of whether it’s there. “Something about our understanding of the gamma rays is missing at this stage,” Leane said. “It’s possible to hide a dark matter signal, if it were really there.”

Alessandro Cuoco, an astrophysicist at Aachen University in Germany who has worked with the same technique in other parts of the galaxy, isn’t surprised to hear that the pulsar verdict may be premature. The method relies on estimations of exactly where the gamma rays should be coming from, and if you’re off, the whole house of cards comes tumbling down. “This is an extremely delicate analysis. You have to take into account very tiny details,” he said, “and they can considerably change your conclusions.”

Researchers emphasize that this result contains no new evidence for dark matter. Rather, it weakens the competing explanation for the galaxy’s gamma ray glow. “It puts the dark matter explanation into slightly better shape,” said Martin Winkler, a physicist at Stockholm University.

In addition, two preprints published in March—one co-authored by Cuoco, another by Hooper—offer complementary support for the dark matter hypothesis. Both analyzed recent data from the International Space Station’s Alpha Magnetic Spectrometer (AMS) experiment. The new studies concluded that the AMS experiment has detected higher than expected levels of antiprotons—another possible remnant of dark matter collisions.

Yet the AMS data are far from conclusive. The universe has a lot of ways of making antiprotons—most of those that come zipping by Earth are from humdrum cosmic rays crashing into gas clouds—and any analysis has to precisely account for all the known sources. The trick is figuring out whether AMS’s small uptick implies the existence of dark matter, or whether it’s just a rounding error, said Tim Linden, an astrophysicist at Ohio State University who co-authored the second of the recent papers. His group found moderate support for a dark matter interpretation, but only if they correctly calculated how cosmic rays travel, how protons get trapped in supernovae, and how hard the solar wind blows. The math is probably right, Linden said, but the devil is in the assumptions: “If you told me the background model we were using is actual reality, I’d be running around screaming, ‘Dark matter!’ right now.”

Cuoco, Linden, and Winkler say details about the AMS instrument and precision proton measurements from particle accelerators will help refine their models. A clearer point for dark matter, however, would be if AMS or another high-altitude experiment found heavier, lumbering antimatter particles, which cosmic rays rarely produce. “That would be a smoking gun,” said Winkler.

Experts express optimism that with these inputs, the current modeling wars could settle down in a matter of years. And now that the gamma ray glow is back on the table, hopes for dark matter look somewhat brighter. “If the galactic center excess is back in the game,” Leane said of the antiproton measurements, “potentially we are seeing the first signal of dark matter.”

Lead image: A view of the center of the Milky Way as seen in infrared light. An unexplained gamma-ray glow coming from the region has fueled a decade-old mystery. Credit: NASA/JPL-Caltech