Dark Matter May Be Trapped in All the Black Holes

The elusive substance may not be a new kind of particle at all. 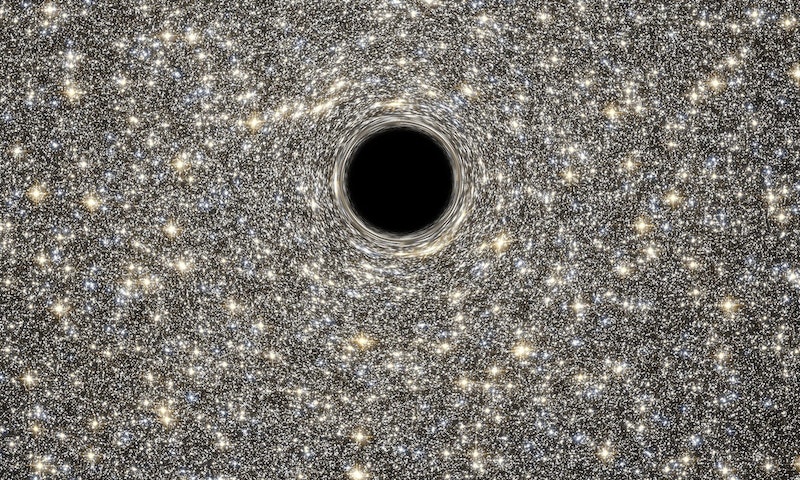 When, on February the 11th, 2016, the spokesperson for the Advanced Laser Interferometric Gravitational Wave Observer, or aLIGO, for short, announced the discovery of gravitational waves, I was stunned. For sure, we expected aLIGO to, at some point, give us something interesting, but we thought it would be tentative. We expected that the project would, after a sophisticated and laborious look at months or years of data, show us a weak signal, popping its head feebly above the noise.

But no, the plots that were shown that fateful day in February were so clear and unambiguous that I didn’t take any convincing. I could see, with my bare eyes, the unmistakable waveform of two large black holes coming together, merging into one and, as it settled down, bleeding gravitational waves into the ambient space time.

Black holes are heavy and hard to see, just the properties we need to account for the missing matter of the universe.

This isn’t the first time scientists have suggested black holes might be dark matter, but we thought the possibility had been decisively ruled out. The resurrection of the idea is but one example of the fertile creativity that follows a new discovery. Ideas that have been out of favor can come back into fashion, looked at in new light, and pursued with enthusiasm—superseding, in some cases, accepted views. These revisionary discoveries also bring together what seem like very disparate fields of research—in this case dark matter and gravitational waves—and lead to fruitful connections.

In the 1970s, Stephen Hawking and his then-graduate student Bernard Carr proposed that, from the chaos that reigned after the Big Bang, a sea of tiny primordial black holes could have emerged, populating space. Over time these black holes would have grown, seeding the formation of galaxies in the process. They could, possibly, even contribute to the overall energy budget of the Universe. Black holes are heavy and hard to see, just the properties we need to account for the missing matter of the universe.

For a few decades, a hardcore group of believers pushed this idea. In the 1990s, it took what seemed like a fatal blow. The MACHO experiment trained a telescope on the Large Magellanic Cloud and watched for the faint flickering that would occur when objects such as black holes passed in front of a star. They found that it would be very difficult to have enough black holes to make up the whole of the dark matter in the Universe.

To many of my colleagues, the discovery of WIMPS is an inevitability; they have to be there.

More recently, Timothy Brandt, from the Institute of Advanced Study in Princeton, has looked at what black holes might do to dense agglomerations of stars, known as globular clusters, living in dwarf galaxies that lurk in the void around the Milky Way. He has shown that, if there are too many black holes, these globular clusters would heat up, puff up, and die out very quickly. Plugging in the numbers for a particular cluster in the dwarf galaxy Eridanus II, he was able to show that only a small fraction of the dark matter could be in the form of dark matter. And so black holes as dark matter became another exotic idea that theorists like to play with, but that seemed to have no bearing on the natural world.

The search for dark matter has focused instead on Weakly Interacting Massive Particles, or WIMPS for short. These are fundamental particles that are relics from very early times when the fundamental forces of nature were unified and behaved very differently than they do now. To many of my colleagues, the discovery of WIMPS is an inevitability; they have to be there. As long as we build an instrument that is powerful and big enough, most cosmologists believe, we will inevitably, one day, see these weird particles.

Except that hasn’t happened. With time, our detectors have become more powerful and bigger, yet they haven’t turned up anything. Recently the LUX experiment, which looks for rare particles depositing their energy in half a metric ton of liquid Xenon buried a mile underground in Lead, South Dakota, has failed to bring up any evidence for hitherto unseen particles. Richard Gaitskell from Brown University, one of the architects behind LUX, has said: “It would have been marvellous if the improved sensitivity had also delivered a clear dark matter signal. However, what we have observed is consistent with background alone.”

Given the dire straits that WIMPS are going through, it makes sense to revisit some of the old, speculative, discarded ideas that have been lying dormant. Two recent papers, one led by Simeon Bird, based at Johns Hopkins University, and another led by Misao Sasaki, based at the Yukawa Institute in Kyoto, do exactly that.

Spurred on by the aLIGO discovery, they have worked out whether black holes with a mass of a few tens of the mass of the Sun could be the dark matter. There would have to be 10 billion of these black holes in the Milky Way, the closest one likely being a few light years away from our solar system. Of these black holes, some would come together to form binaries, and a few such pairings would be detectable by aLIGO. The two teams agree that aLIGO should expect to see between a few to many tens of these events a year; they would dominate black holes produced by ordinary means such as stellar collapse. In other words, if these black holes are the dark matter in the galaxy, we would have expected to have seen them with aLIGO already. And we have.

The devil is in the details. How the primordial black holes would have originally appeared is still up in the air. One idea is that they were manufactured during a brief period of accelerated expansion in the early Universe, known as inflation. Jolts and shudders in the expansion would have concentrated energy in dense wads, seeding the formation of black holes. For us to detect them, these holes would need to get close enough to clump together and then merge, sending out the gravitational waves. How and when this happens would depend on the shape of the Milky Way, how tightly packed its mass is, and how fast the black holes are moving. Sensible assumptions seem to give a promising answer, but they are still only assumptions.

These are early days in the field following the euphoria of the aLIGO discovery, and anything can happen. The constraints from the MACHO experiment and from globular clusters work against their idea but some ingenuity might fix the problems brought by observations.

The advanced LIGO discovery reminds me of another transformation that I have witnessed during my career. In 1991, the COBE satellite measured, for the first time, ripples in the cosmic microwave background, the relic radiation left over from the Big Bang. The frustrating and almost quixotic quest for these ripples had gone on for over 25 years, almost relegated to a backwater of cosmology. Cosmology itself was seen as esoteric and hard to pin down, a woolly subject, albeit hugely enjoyable and creative. Yet when the ripples were finally discovered, they energized cosmology with an avalanche of ideas not only in astronomy but also in particle physics.

For decades, now, we have been attempting to link the fundamental laws of nature that would have reigned in the early Universe with the way that galaxies are born, evolve, and end up forming its current large-scale structure. While the COBE discovery set me on the path I have followed until today, I can very well see advanced LIGO doing the same for a new generation of physicists in their search for dark matter.