Do Dolphins Have Conversations? We Still Can’t Say 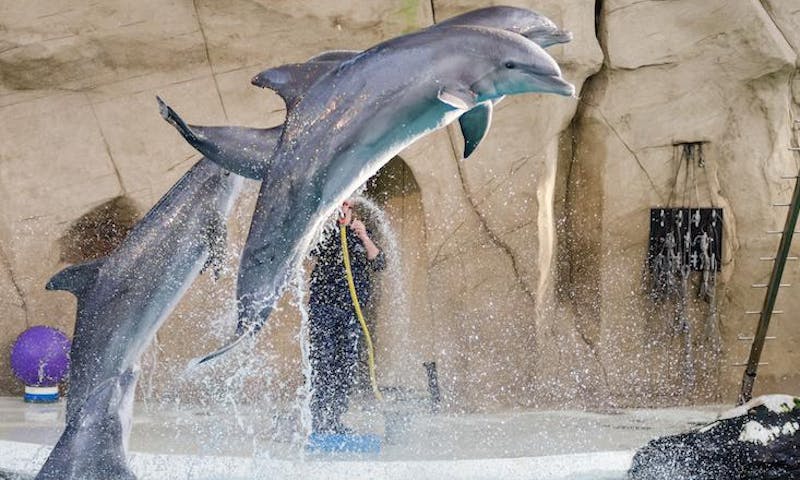 Sure, dolphins use sonar, whiz through the ocean at incredible speeds, and battle sharks. But can they chat? Last week, a study published in Russia’s St. Petersburg Polytechnical University Journal: Physics and Mathematics claimed to have recorded two dolphins doing just that. Two Black Sea bottlenose dolphins, named Yasha and Yana, exchanged a series of vocal pulses that resembled “a conversation between two people,” wrote the study’s author, Vyacheslav Ryabov, a senior researcher at the T. I. Vyazemsky Karadag Scientific Station. What’s more, Yana and Yasha were exceedingly polite, listening to one another at turns without interrupting.

Unsurprisingly, news of the study swept through social media like wildfire. Humans have long felt an uncanny connection to dolphins, in part because of their Mona Lisa smiles and tenderly soulful eyes, and in part because they do indeed exhibit strikingly intelligent behavior.

We’ve watched dolphins recognize themselves in mirrors and on television. Dolphins play, and they chastise their young. They engage in recreational sex stimulation (and, interestingly, in more homosexual behavior than any known animal). One researcher, while smoking a cigarette beside a dolphin tank, witnessed a baby dolphin exhale its mother’s milk in imitation.

Dolphins, not unlike dogs, are handy at understanding and decoding human syntax in the form of sign-language sentences; for example, if a trainer signs “Balance the ball on your snout and then toss it to me,” a trained dolphin can understand, even if they’ve never heard that exact command. They can also recognize a nonsense command and ignore it.  And dolphins have responded to abstract symbols. When shown an arbitrary symbol for “ball” followed by one for “question,” a dolphin named Akeakamai correctly pressed a “no” lever when the ball wasn’t there. These sorts of astonishing anecdotes are seemingly endless.

Dolphins undoubtedly communicate with one another as well, in the form of two distinct types of vocalization: whistles and pulses. Dolphins also use pulses to echolocate—the sonar-like use of sound waves and echoes to determine where objects are in space. The distinction between pulses used to echolocate and those used to communicate isn’t well understood. In the Russian study, Ryabov asserted that his team’s study had unprecedented success in capturing conversation precisely because its set-up prevented the dolphins from echolocating—leaving the team free to eavesdrop on the communication pulses.

To the lay ear, dolphins’ creaky zips and coos sound amazingly complex. For decades, dolphin researchers have worked to decode these sounds, with difficulty. We do know that many dolphin species (Atlantic spotted and bottlenose, to name a few) develop their own “signature whistle” between one month and two years of age. These whistles function much like a name: Dolphins use their own whistle to introduce themselves. They use other dolphins’ whistles to call them, or to refer to them when they’re absent. They answer with their own whistle when they hear themselves called—a kind of “Here I am!” affirmation. A dolphin’s signature whistle never changes.

But carry on a polite conversation? Top American dolphin experts were united last week in their skepticism. Both Denise Herzing, the founder of the Wild Dolphin Project, and Kathleen Dudzinski, the director of the Dolphin Communication Project, told Nautilus that the study didn’t present adequate data to support its claims, and should be taken with a grain of salt.

Marc Lammers, an expert in marine bioacoustics and cetacean behavior at the Hawaii Institute of Marine Biology, was outspoken in his criticism. “Over the past 50 years, people have recorded millions of hours of dolphin signals, both in captivity and in the wild,” he said. “To say that he has now managed to capture some type of sound that no one has recorded before just doesn’t make sense.”

Lammers explained that the study is flawed both methodologically and in the manner in which it was presented. The study positioned the dolphins at the surface of the water—in an attempt to eliminate the possibility that the dolphins might have been producing echolocation clicks—and then recorded them to the side, using a hydrophone.

“[Ryabov] tried to argue that these sounds aren’t used for echolocation, because the dolphin’s heads were partially out of the water,” Lammers said. “But he can’t really make that claim because he didn’t measure the sounds coming from any other directions—like in front of the animals’ heads. There’s no way to exclude the possibility that the animals were clicking to accomplish some sort of a sonar task.” To make matters murkier, Lammers said, Ryabov positioned the dolphins in just a way that amplified the reflection of their sounds off the water’s surface—convoluting the recording even more.

Lammers said there was no reason to believe that the dolphins were taking their turns in conversation. “It’s totally unjustified to make that kind of a leap. We know that dolphins produce clicks in a whole range of circumstances. And we know that they often avoid producing sounds at the same time so as not to interfere with one another.”

So what’s the likelihood that dolphins do converse in the sense that we do? Herzing has studied a wild spotted dolphin population in the Bahamas across 30 years and multiple generations. In an interview with the New York Times, Herzing said, “My goal with the Wild Dolphin Project was to get enough complex information about how they communicate to decipher their communication system in rich, contextual detail, much like an anthropologist would try to go in and decipher a culture.” She spent the first five years of the Wild Dolphin Project simply observing the dolphins who came by.

Eventually, she began recording dolphin noises—thousands and thousands of hours. As far as decoding goes, Herzing says that she can recognize specific types of sounds correlated with social actions like fighting, mating, or disciplining a calf. But any evidence of conversations remains elusive.

Two years ago, Herzing created a translator of sorts—a computer called the CHAT box (for Cetacean Hearing and Telemetry) that both recognizes and generates dolphin noises in real time. Herzing can take the computer underwater and “speak” to the dolphins—for example, creating her own signature whistle and playing it for them. So far, the dolphins haven’t responded.

It’s not surprising that dolphin researchers, like the ones rejecting Ryabov’s study, are loath to make large claims. The field is still haunted by the ghost of John C. Lilly, the notorious neuroscientist who held that learning “dolphinese” could help us speak to aliens, fed LSD to dolphins, and generally cast a pall over the legitimacy of dolphin communication research.

As much as we might like to believe that dolphins are casually conversing in the middle of the sea, the research suggests otherwise. In his book Beyond Words, animal researcher Carl Safina writes, “From everything we understand at present, it seems that dolphins’ whistles convey information that is simple and repetitive, not complex, not specific, not highly pattered; not a word-based, large-vocabulary, syntax-equipped language. Yet few who love dolphins—myself included—really want to accept that.”