Do Other Animals Make Music, or Just Sounds? 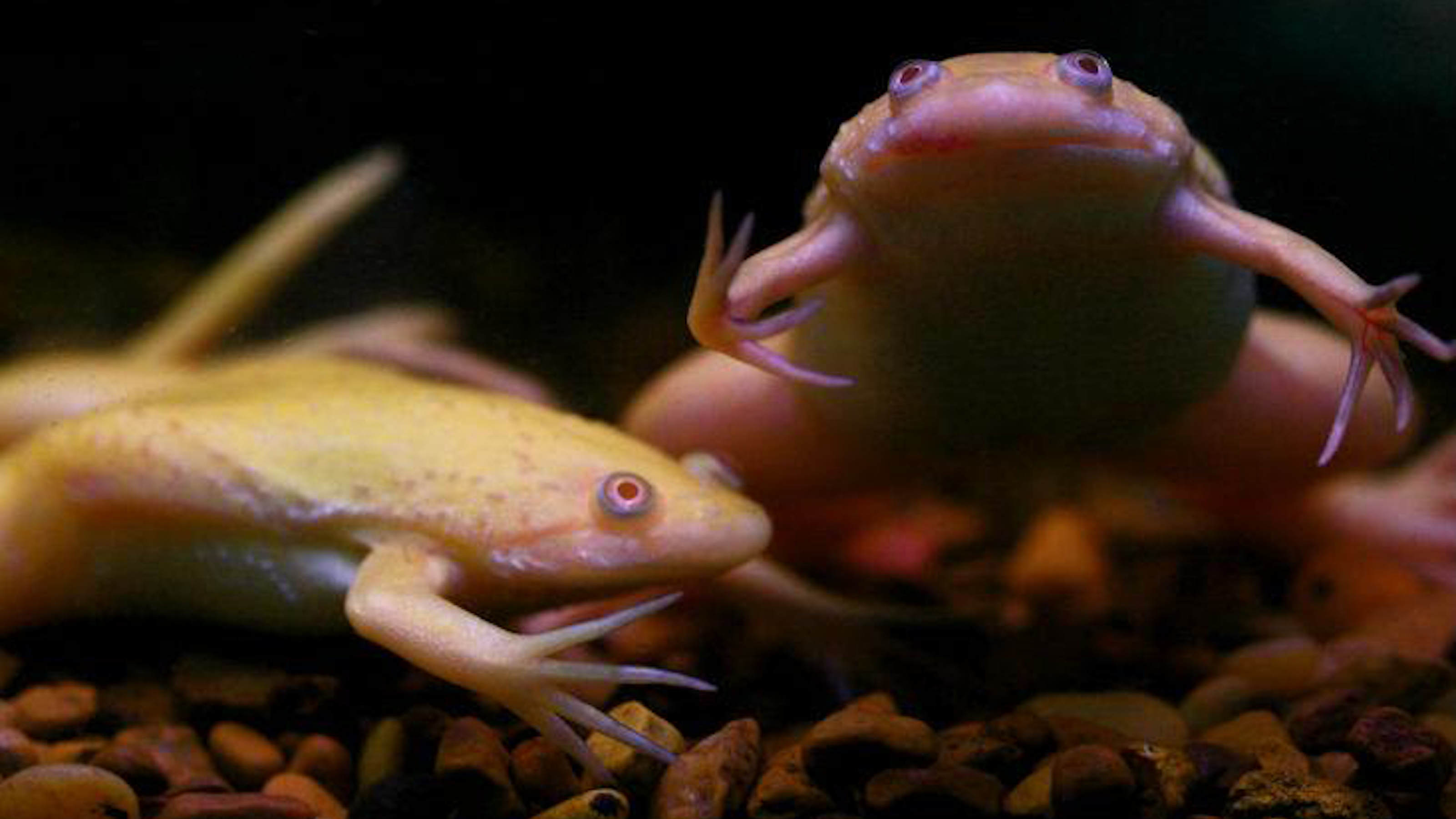 The question in the title of this post involves not one but two
enigmas: Artistic merit is an abstract and slippery concept, and
assigning intention to the actions of other species is a perpetual
challenge. Thus, the question invites various, contradictory answers.
Still, I find myself inspired by the activities of other animals, and
believe that many biological phenomena are rich with artistic value.

In
the middle of the night, I am called into the office at the back of
my small apartment by the sound of my singing pet frogs. They
screech at a rhythm that makes them sound like firing machine
guns—click
click click click click. For
reasons that I don’t fully understand, I like to be awoken by this
cacophony.

I
have two frogs: an albino that I’ve named Snowball, and a spotted
one that I call, predictably, Spot. They didn’t begin singing until
a few weeks ago, and once they began they became significantly more
interesting roommates. Prior to their vocal outbursts—a sign of
their sexual maturation—I often peered down into their murky tank
and felt a lonely boredom. They are African clawed frogs (Xenopus
laevis),
aquatic animals that live entirely underwater, but the translucence
of their habitat has not allowed me many insights regarding their
behavior. I don’t have much in common with Snowball and Spot, and
thus I have had a difficult time decoding the meanings and intentions
behind their actions. They hover motionlessly in the water,
presumably holding frog thoughts in their heads, then spontaneously
dart in unpredictable trajectories that send them bouncing off the
walls of their tank in random directions. When they sing, however, I
hear an invitation into their underwater world. Their songs offer me
an opportunity to join in a shared experience that bridges the
boundary separating our species. I become inspired where I was once
alienated and disappointed.

Similar
to my captivation by the songs of my frogs, the avant garde composer
Jim Nollman
has brought other organisms into his compositions. His unique
biography brought him from the music scene of 1970’s San Francisco
to a town in the south of Mexico, San Cristobal de las Casas. While
abroad, he began to practice with indigenous instruments. One
morning, while playing a flute, he emitted a note that elicited a
gobble from a nearby turkey. The two musicians, human and turkey,
continued to play together while adding choreography to their
performance. The turkey performed a dance, stepping forward and
backward to Nollman’s tune. While it is difficult to ascribe
intention to the turkey’s behavior, we know that this performance
was exploratory rather than functional for Nollman, at least. Music
and dance served as a language that allowed these two distinct beings
to share a unique experience that enlivened them to the richness of
other forms of being.

Biologists
have also taken an interest in the vocal patterns of other organisms.
These researchers have investigated the evolution of species by
tracing specific tones and tunes across space and time. For
example, the neuroethologist Darcy Kelley has explored the various
lineages of Xenopus frogs—the same type as my pets—in part through sonic clues. In her most recent article [pdf],
she suggests that species-specific calls are the result of selective
pressures. Thus, for these organisms survival hinges on an ability to
sing and detect appealing songs, which consequently allow them
to find mates. David Rothenberg, a musician as well as a
philosopher of science, has used this fact as a starting point to
suggest that the evolution of life has been guided by a pursuit of
beauty. (Rothenberg’s current interests are in the music of bugs,
and he
has several upcoming events
in the Northeast this summer where he will perform compositions
alongside insects, including the emerging swarm of cicadas.)

Those
who deny that other animals can produce works of art will argue that
these examples fail to demonstrate a self-aware intent. Or perhaps
they might protest that these occurrences serve a purely functional
purpose. I might disagree, though I am willing to concede these points.
But I will not agree that it diminishes their significance as works
of art that are capable of reaching transcendent heights. Indeed,
since the beginning of the 20th century, when Marcel Duchamp transformed the banal—famously, a
urinal—into
a pinnacle of artistic achievement, the labor, intention, and context
that surrounds the production of artistic works has been overshadowed
by the final products’ ability to communicate a novel concept.
Stroll through any museum of contemporary art, and it is immediately
clear that the goal of these works is not to be beautiful, but rather
to be thought-provoking.

The
songs of my frogs and the dance of Nollman’s turkey meet this
criterion. These performances animate the mysteries that are
concealed on the other side of the species boundary, the space that
this journal has been interrogating for the past month. In these
instances, human spectators are teased with brief glimpses into the
lives of other organisms. By becoming aware that these beings conceal
surprising secrets, we are able to freely reflect on new
possibilities. If we take them seriously, then they will prove to be
as inspiring as our own imagination.

Charlie
Nichols studied
studio arts before turning his attention to cultural anthropology. As
a graduate student, he studies the politics of wildlife management
and the social impacts of extinction.