If there’s life beyond Earth, the genetic code might be our common bond. 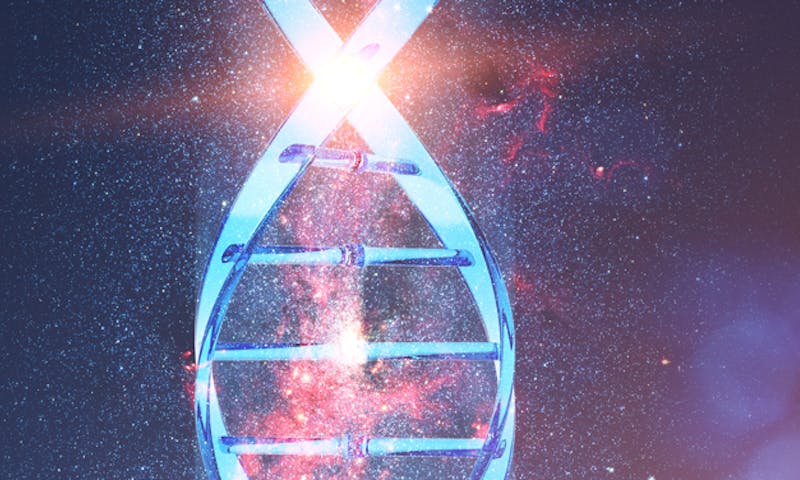 The primary difficulty of interstellar communication is finding common ground between ourselves and other intelligent entities about which we can know nothing with absolute certainty. This common ground would be the basis for a universal language that could be understood by any intelligence, whether in the Milky Way, Andromeda, or beyond the cosmic horizon. To the best of our knowledge, the laws of physics are the same throughout the universe, which suggests that the facts of science may serve as a basis for mutual understanding between humans and an extraterrestrial intelligence.

One key set of scientific facts presents an intriguing question. If aliens were to visit Earth and learn about its inhabitants, would they be surprised that such a wide variety of species all share a common genetic code? Or would this be all too familiar? There is probable cause to assume that the structure of genetic material is the same throughout the universe and that, while this is liable to give rise to life forms not found on Earth, the variety of species is fundamentally limited by the constraints built into the genetic mechanism.

On Earth we have only sequenced the genomes of a small percentage of living organisms and have only recently completed the human genome. We have successfully cloned several animals, but technical and ethical roadblocks prevent scientists from doing the same with humans. If an extraterrestrial civilization isn’t burdened with ethical dilemmas about cloning, however, sending the genetic code for humans and other species may be the most effective way to teach them about our biology.

References to our genetic makeup have been a feature of interstellar messages from the very beginning. Although the first genes wouldn’t be sequenced for another three years, the 1974 Arecibo message, an interstellar radio message sent from the Arecibo radio telescope in Puerto Rico, included a rudimentary bitmap of DNA’s helical structure. Designed by Frank Drake, the founder of SETI, with input from Carl Sagan, the Arecibo message consisted of 1,679 binary digits arranged as a rectangular bitmap. The resulting image depicts the numbers one through 10 and the atomic numbers for the five elements that make up DNA, as well as the formulas for the sugars and bases in DNA nucleotides, a crude drawing of a human, a graphic representation of the solar system, and a picture of the Arecibo telescope.

Would aliens be surprised that life on Earth shared an underlying genetic code? Or would this be all too familiar?

In 1999, two interstellar radio transmissions known as Cosmic Calls included symbols for each of DNA’s four nucleotides. To date, however, only a single interstellar transmission has encoded any genetic information.

To commemorate the 35th anniversary of the Arecibo message, the artist Joe Davis traveled to Puerto Rico to broadcast the genetic sequence for the large subunit of the ribulose-1,5-bisphosphate carboxylase oxygenase (RuBisCO) molecule. RuBisCO is the most abundant protein on Earth and plays a major role in converting atmospheric carbon dioxide into energy-rich molecules for plants. To encode this genetic information in a signal, Davis first considered representing each of the 1,434 nucleotides with a two-bit ID (C=00, T=01, A=10, G=11) to create a 2,868-bit sequence representing the RuBisCO molecule. The problem with this, of course, is that there isn’t enough information to use analysis techniques such as those described above by Elliott. Thus, any ETI that received this message would have no way to determine the coding schema used to create the message, which would essentially be an unintelligible mess of data.

For better or worse, it is unlikely that any extraterrestrials will ever receive, much less understand, Davis’s message. None of the stars selected by Davis have been confirmed to host planets, and two of the target stars aren’t likely able to support life even if they do. GJ 83.1 is a flare star, a type of dwarf known for periodic bursts of intense radiation and Teegarden’s star is a red dwarf, a type of star that is widely believed to be too cool to support life unless the planet was so close to the star that it would become tidally locked, meaning that half of the planet would be in perpetual night.

Even if there are intelligent inhabitants around any of the three “RuBisCO stars,” the odds that they would be able to interpret Davis’s message is quite low, given the lack of context or redundancy to correct for message corruption during transit. Davis was the first to admit that his interstellar message was meant more for his fellow passengers on spaceship Earth than extraterrestrials, but this stunt points the way to a promising future for METI (messaging extraterrestrial intelligence).

In the last few decades, biologists have sequenced the genomes for thousands of species, including humans. These are effectively the “blueprints” for the species, but we are only just beginning to learn how to read the code. A sufficiently advanced extraterrestrial intelligence may have developed genetic engineering to the point where genomes are the equivalent to an executable computer program, which would allow them to artificially recreate a human and other terrestrial species in their own labs. This assumes that extraterrestrials are made of the same genetic “stuff” as life on Earth, but this may not be as large of an assumption as it first seems.

In some ways, it would almost be more disturbing to make contact with an intelligent extraterrestrial civilization populated by fleshy, mostly hairless hominids than a civilization of eight-eyed cephalopods, but this possibility is not entirely out of the question. As the astrobiologist Charles Cockell has argued, empirical evidence suggests that certain features of life are deterministically driven by physical laws. Extrapolating from this, it is reasonable to believe that “at all levels of its structural hierarchy, alien life is likely to look strangely similar to the life we know on Earth.”

Cockell’s argument is analogous to the case made by pioneering cognitive scientist Marvin Minsky that extraterrestrials are likely to think like us because they are subject to the same basic physical constraints. Minsky argued that we will be able to converse with an extraterrestrial intelligence because they will think like us. If all intelligent creatures are faced with the same fundamental problems (restraints on space, time, and materials) and the methods of intelligence are determined by the nature of the problem at hand, Minsky reasoned that extraterrestrial intelligences will arrive at solutions similar to our own, namely symbolic systems for representing these problems and processes for manipulating those systems that can also be described symbolically.

It would be naïve, of course, to suggest that evolution is totally determined by the laws of physics given the significant and obvious role that chance plays in the trajectory of evolution. For example, research suggests that the probability of an asteroid impact resulting in global cooling, mass extinction, and the subsequent appearance of mammals was “quite low” 66 million years ago. It was sheer cosmic bad luck that the asteroid impacted the relatively small portion of the Earth’s surface that was rich in hydrocarbons and sulfur that ultimately choked the Earth with stratospheric soot and sulfate aerosols. In this case, the site of the asteroid impact changed the history of life on Earth in a way that could never be predicted by deterministic evolutionary laws.

The point is that although the trajectory of evolution isn’t predictable in advance, the variety of species it produces is not boundless. This contradicts the intuitive interpretation of Darwinian evolution, which suggests that natural selection results in a “tendency of species to form varieties” in infinite number.

On the contrary, Cockell argues that “evolution is just a tremendous and exciting interplay of physical principles encoded in genetic material” and “the limited number of these principles … means that the finale of this process is also restrained and universal.”

Consider, for example, the emergence of cellular life on Earth. Is the cellular form something that we might expect to emerge on an extraterrestrial planet, or would extraterrestrial organisms find a different mode of self-assembly?

Might an extraterrestrial intelligence have a genetic code built from six or more nucleotides? It’s unlikely.

In the 1980s, the biologist David Dreamer used carboxylic acids extracted from the famous Murchison meteorite to demonstrate that these simple molecules would spontaneously form cellular membranes when added to water. According to Cockell, this suggests that the ingredients for cellular life are “strewn throughout the Solar System in carbon-rich rocks,” which means “we might expect the molecules of cellularity to form in any primordial cloud, ready to deliver their cargo of protocell material to the surface of any planet with a waiting abundance of water.” Later experiments demonstrated that meteorites are far from the only source of molecular material that can form cellular membranes, suggesting that this mode of organization is likely common in the universe.

Similar physical laws also limit the possibilities of still more fundamental aspects of biology, such as the structure of DNA. One of the most remarkable features about DNA is that it is composed of only four nucleotides—adenine, thymine, cytosine, and guanine—that can only combine in very limited ways: adenine pairs with thymine and cytosine pairs with guanine. Is the fact that there are only four nucleotides or that they combine into two base pairs an evolutionary accident? Might an extraterrestrial intelligence have a genetic code built from six or more nucleotides, and might these nucleotides be different from the four that comprise the DNA of life on Earth? This is a possibility, of course, but there are strong reasons to believe that it is unlikely.

For example, in a two-nucleotide system, each base can pair with half of the bases. In a four-nucleotide system, each base can only link with a quarter of the bases, and so on. Thus, Cockell argues, “as you add more bases, it gets more difficult to find ones that are sufficiently dissimilar to make it easy for them to be distinguished when the molecule replicates,” which results in a higher rate of errors. Indeed, computer models of RNA, the molecular interface between DNA and basic proteins, suggest that four nucleotides result in the greatest fitness.

As for the types of base pairs, research using synthetic nucleotides to expand the number of base pairs in the genetic code has demonstrated that swapping these synthetic base pairs out of the normal code or adding them usually produces unstable results. However, organisms such as bacteria that have synthetic nucleotides added into an expanded genetic alphabet have been shown to be stable under stringent laboratory conditions. The results of ongoing experiments with the many possible base pairs suggest that the four base pairs we see in RNA and DNA are optimized to meet the conditions that allow for its replication, but also the preservation of its structure.

If the brain and its cognitive structures are in fact optimized for the embodied experience of the organism, this suggests that the thesis that extraterrestrials will think similarly to us is not so far-fetched after all.

Daniel Oberhaus is a staff writer at Wired, where he covers space exploration and the future of energy. He is the author of Extraterrestrial Languages.

Adapted from Extraterrestrial Languages by Daniel Oberhaus, © 2019, published by The MIT Press. @mitpress.