Five Veteran Scientists Tell Us What Most Surprised Them

Fifty years ago, who knew we’d learn to clone genes and find water on Mars? 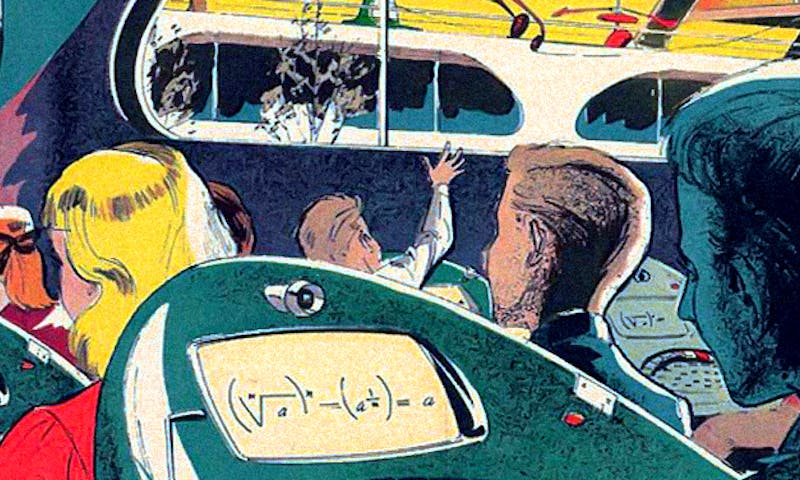 Turn back the clock to 1965. Science appeared to be marching forward at an unrelenting pace. Biochemists had cracked the genetic code (how DNA translates into proteins), inspiring Life magazine to envision “superbabies with improved minds and bodies.” In an article for the trade magazine Electronics, computer engineer Gordon Moore predicted that the number of transistors on an integrated chip would double every year while the cost stayed the same—the eponymous Moore’s Law. This, he wrote, would lead to “such wonders” as home computers, mobile phones, and automatic control systems for cars.

Meanwhile, the New York World’s Fair provided further glimpses of what the future might hold: fusion power, moon colonies, underwater hotels, robot maids, flying cars, and 3-D TV. For young scientists at the time, these forecasts must have been both thrilling and daunting. What did they expect to realistically come true in their lifetimes? And did science live up to their expectations?

We checked in with five scientists whose careers were just beginning in 1965. They are microbiologist Rita Colwell, former director of the U.S. National Science Foundation and a top expert in infectious diseases; physicist Mary K. Gaillard, who co-predicted the mass of the charm quark; astronomer Edwin C. Krupp, who has directed Los Angeles’ Griffith Observatory for 41 years; retired astronaut Harrison “Jack” Schmitt, one of the last people to walk on the moon; and paleoanthropologist Ian Tattersall, lemur buff and curator emeritus at the American Museum of Natural History, in New York City.

Looking back on the past 50 years, they share how the future has both delighted and disappointed.

Colwell: I was 31 years old and had just started as a new assistant professor at Georgetown University, where I began my research into cholera.

Gaillard: I was 26. I was publishing papers, working on my French doctorate [in particle physics] and raising a 3-year-old boy and a 2-year-old girl.

Krupp: I turned 21 that fall. I was an undergraduate at Pomona College in Claremont, California. I was living at the Brackett Observatory on campus, where I had a job as a caretaker, taking weather measurements.

Schmitt: I was 30 years old and learning to fly T-38 aircraft as part of the initial phase of my astronaut training. This ultimately led to my exploring the valley of Taurus-Littrow on the moon as part of the Apollo 17 mission.

Tattersall: I was 20 years old, a recently arrived undergraduate at Cambridge studying paleoanthropology. I was only just learning of the amazing hominid fossil discoveries that my erstwhile Nairobi neighbors Louis and Mary Leaky had been making at Tanzania’s Olduvai Gorge.

What did you expect scientists in your field would have discovered by now?

Gaillard: I had no idea what to expect. The concept of quarks had just been introduced a year before [in 1964]. There was a lot of data but not much theory to explain it. We were mostly just trying to figure out how to interpret it.

Krupp: I don’t think most people at that age have that kind of perspective, although there were certainly things brewing at the time. The flyby of Mars by the Mariner 4 spacecraft—that was July of 1965. It was stunning because it was the first time that we ever had a close-up view of another planet. So this revolutionized our sense of Mars in a moment. Did I ever expect that we would be on Mars by this point, in terms of human beings walking around on the planet? I had no idea. We were pioneers in space. And when you are pioneers, you don’t know what’s going to happen.

Tattersall: I had no expectations; I was busy trying to master a field that was undergoing enormous change and ferment. Louis Leakey and his colleagues had just put the cat among the pigeons by describing the very primitive new species Homo habilis from Olduvai [a gorge in Tanzania]. And the dating of these fossils, by the new potassium-argon method, had given our genus—and the hominid family as a whole—a previously unimaginable antiquity.

What do you see as the greatest achievement in your field in the past 50 years?

Colwell: The marriage of information technology to molecular biology advances has been a complete revolution. Today, if I would like to know what bacteria are present in a sample of water, or spinal fluid, or food, or air, I extract the nucleic acid—the DNA and RNA—and run it through machines that identify bacterium strains within minutes. Previously, I went through thousands of test tubes and petri plates, and it took months.

Gaillard: The formulation and experimental verification of the Standard Model gave a complete and accurate description of three of the four fundamental forces of nature: strong (nuclear force), weak (responsible for radioactive decay of unstable nuclei) and electromagnetic. This is a far cry from the situation when I entered the field in the 1960s. At that time, only the electromagnetic interactions had a well-understood and tested formulation. Now all three interactions are on an equal footing.

Krupp: When we got the first beautiful pictures of the Earth in space, those pictures changed the way we look at the Earth and ourselves. Our whole sense of the environment, and the shift in beliefs we hold about the environment, have come in the wake of seeing the Earth as a world in space, as a planet in this otherwise vast and empty cosmos. I think historians a century from now will look back and say, “When did human perspective transform?” And the answer will be the space era.

Tattersall: The greatest leap has been an intellectual one. When I was an undergraduate, I was taught the received wisdom of the previous 15 years, which was that human evolution had consisted of little more than a single-minded slog from primitiveness to perfection. Now it has become clear that the reality was very different: The history of the human family has been one of vigorous evolutionary experimentation. Numerous new hominid species were tossed out into the ecological arena, to succeed or to fail in competition with their own relatives, and with other elements of the biota. Our species is simply the one that happened to succeed in this struggle. And the fact that we are the lone hominid in the world today tells us a lot more about the unusual nature of our species than it does about the process that produced us.

Colwell: Fifty years ago, the genomic revolution was really just getting underway. It was only in 1953 that Watson and Crick found DNA’s structure. What was definitely not expected was the domino effect this discovery had, the cascade of discoveries that just came faster and faster—deducing the code, cloning genes, being able to modify inherited genetic traits.

Gaillard: The existence of dark energy—that is, a very tiny cosmological constant. The apparent absence of dark energy has long been a puzzle for theorists. The experimental bounds on its value were so tiny, compared with other energy scales in nature, that many people thought there must be an as-yet unknown symmetry or dynamical effect that forced it to be exactly zero. This notion was invalidated by the observation of a tiny but non-vanishing value.

Krupp: Astronomy involves the biggest, grandest, craziest, wildest things that we know, and so you are sort of tutored not to be shocked. But let me pick one that I think is rather startling: There is a lot of water in the solar system. The fact that it’s in the moons of Jupiter and underground on Mars—these are really startling facts. Think back to 1965. We had those first pictures of Mars, and it really didn’t look like people had imagined it. The reaction of people then was, “This looks barren; it looks just like the moon.” So you came to the conclusion that Mars was a cold, dry, empty world, and all bets on the idea of life on Mars kind of evaporated with that flyby. Now we have gone back with one instrument after another and found there was water on Mars. That is very important for understanding the evolution of life in the cosmos.

Tattersall: There is no question that the curious little “Hobbit” from the Indonesian island of Flores is the most unexpected paleoanthropological discovery made in my lifetime. Nobody could have predicted this amazing fossil form, which was described under the name of Homo floresiensis, though it is so bizarre that its attribution to our own genus seems a bit far-fetched. It survived until 12,000 years ago, close to our own day, yet it had the tiny brain and really short stature that were typical of our earliest extinct relatives. But otherwise it doesn’t look like those earliest relatives at all.

Looking back, what do you wish had gone down differently?

Colwell: I have a vision of a hand-held genetic sequencer and decoder, but we haven’t got there yet. Perhaps it’ll be another year or two, or three, or maybe five, but it has taken longer than I had hoped. Why? A combination of funding problems and the engineering of the thing. This is a time when it’s very hard to get funds to do research, which is having an adverse effect in general. It should be possible for a physician to make a bedside diagnosis of an infectious agent within minutes.

Gaillard: I wish that we’d found some hint of new physics beyond the Standard Model, such as supersymmetry. Maybe something will turn up in forthcoming data from the Large Hadron Collider [the world’s largest particle accelerator, in Switzerland]. It is a pity that the Superconducting Super Collider [an even larger accelerator proposed in Texas] was cancelled. With it, we might have found something by now.

Krupp: If you had asked me not that long ago, I would have had an answer. I remember when we were just getting started exploring the solar system, and we made a deliberate decision that we would not go to Pluto. I remember feeling regret. This was personal: I had gotten to see these other worlds close up, but Pluto was still out there. But [in July], New Horizons [a NASA probe launched in 2006] made it. Are we thrilled by what we have seen out there? Was it totally unexpected? You bet!

Schmitt: I wish we had developed fusion power using helium-3 gathered from the moon as the economic basis for lunar settlements.

Tattersall: Most paleoanthropologists are still trapped in a minimalist mindset that prefers to shoehorn new hominid fossil discoveries into pre-existing species and genera, rather than create new ones to accommodate new morphologies. If paleoanthropologists had latched onto the emerging pattern of early hominid diversity a few decades ago, instead of remaining mesmerized by the notion of linear development, our current picture of the human biological past—and thus of its product (us)—would look very different from the one we have. We would better grasp that we are not a perfected product that has been fine-tuned behaviorally by eons of natural selection. We would understand that our biology does not condemn us to behave in specific ways, and that despite our individual inherited proclivities, we retain responsibility for what we individually become. Hopefully, by 2050 we will have a clearer perspective on the kind of creature our species is.