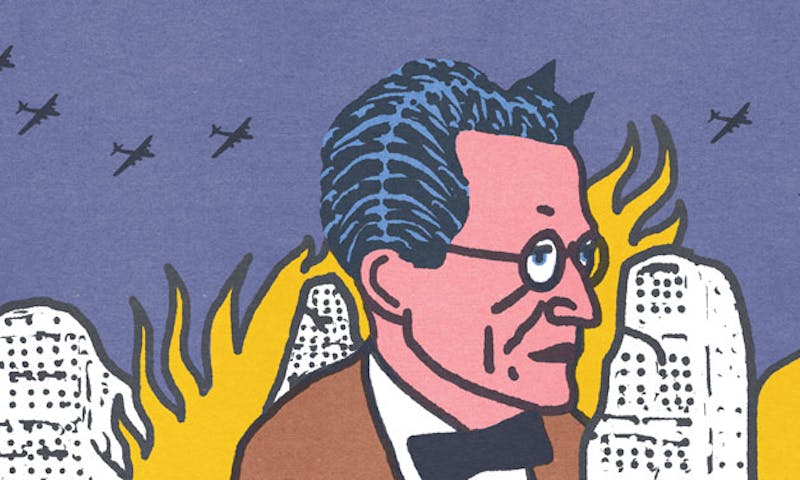 Of all the bizarre facets of quantum theory, few seem stranger than those captured by Erwin Schrödinger’s famous fable about the cat that is neither alive nor dead. It describes a cat locked inside a windowless box, along with some radioactive material. If the radioactive material happens to decay, then a device releases a hammer, which smashes a vial of poison, which kills the cat. If no radioactivity is detected, the cat lives. Schrödinger dreamt up this gruesome scenario to mock what he considered a ludicrous feature of quantum theory. According to proponents of the theory, before anyone opened the box to check on the cat, the cat was neither alive nor dead; it existed in a strange, quintessentially quantum state of alive-and-dead.

Today, in our LOLcats-saturated world, Schrödinger’s strange little tale is often played for laughs, with a tone more zany than somber.1 It has also become the standard bearer for a host of quandaries in philosophy and physics. In Schrödinger’s own time, Niels Bohr and Werner Heisenberg proclaimed that hybrid states like the one the cat was supposed to be in were a fundamental feature of nature. Others, like Einstein, insisted that nature must choose: alive or dead, but not both.

Although Schrödinger’s cat flourishes as a meme to this day, discussions tend to overlook one key dimension of the fable: the environment in which Schrödinger conceived it in the first place. It’s no coincidence that, in the face of a looming World War, genocide, and the dismantling of German intellectual life, Schrödinger’s thoughts turned to poison, death, and destruction. Schrödinger’s cat, then, should remind us of more than the beguiling strangeness of quantum mechanics. It also reminds us that scientists are, like the rest of us, humans who feel—and fear.

Schrödinger crafted his cat scenario during the summer of 1935, in close dialogue with Albert Einstein. The two had solidified their friendship in the late 1920s, when they were both living in Berlin. By that time, Einstein’s theory of relativity had catapulted him to worldwide fame. His schedule became punctuated with earthly concerns—League of Nations committee meetings, stumping for Zionist causes—alongside his scientific pursuits. Schrödinger, a dapper Austrian, had been elevated to a professorship at the University of Berlin in 1927, just one year after introducing his wave equation for quantum mechanics (now known simply as the Schrödinger equation). Together they enjoyed raucus Viennese sausage parties—the Wiener Würstelabende bashes that Schrödinger hosted at his house—and sailing on the lake near Einstein’s summer home.

Too soon, their good-natured gatherings came to a halt. Hitler assumed the chancellorship of Germany in January 1933. At the time, Einstein was visiting colleagues in Pasadena, California. While he was away, Nazis raided his Berlin apartment and summer house and froze his bank account. Einstein resigned from the Prussian Academy of Sciences and quickly made arrangements to settle in Princeton, New Jersey, as one of the first members of the brand-new Institute for Advanced Study.

Schrödinger replied with a novel twist. In place of gunpowder, there was now a cat.

Meanwhile, Schrödinger—who was not Jewish and had kept a lower profile, politically, than Einstein—watched in horror that spring as the Nazis staged massive book-burning rallies and extended race-based restrictions to university instructors. Schrödinger accepted a fellowship at the University of Oxford and left Berlin that summer. (He later settled in Dublin.) In August, he wrote to Einstein from the road, “Unfortunately (like most of us) I have not had enough nervous peace in recent months to work seriously at anything.”2

Before too long their exchanges picked up again, their once-leisurely strolls now replaced by trans-Atlantic post. Prior to the dramatic disruptions of 1933, both physicists had made enormous contributions to quantum theory; indeed, both earned their Nobel Prizes for their work on the subject. Yet both had grown disillusioned with their colleagues’ efforts to make sense of the equations. Armed with paper and postage stamps, they dove back into their intense discussions.3, 4

This produced the first stirrings of the soon-to-be-born cat. In a follow-up letter to Schrödinger, Einstein asked his friend to imagine a ball that had been placed in one of two identical, closed boxes. Prior to opening either box, the probability of finding the ball in the first box would be 50 percent. Einstein doubted that this was a complete description, and believed that a proper theory of the atomic domain should be able to calculate a definite value. Calculating only probabilities, to Einstein, meant stopping short.

Encouraged by Schrödinger’s enthusiastic reply, Einstein pushed his ball-in-box analogy even further. What if the small-scale processes that physicists were used to talking about were amplified to human sizes? Writing to Schrödinger in early August, Einstein laid out a new scenario: Imagine a charge of gunpowder that was intrinsically unstable, as likely as not to explode over the course of a year. “In principle this can quite easily be represented quantum-mechanically,” he wrote. Whereas solutions to Schrödinger’s own equation might look sensible at early times, “after the course of a year this is no longer the case at all. Rather, the ψ-function”—the wavefunction that Schrödinger had introduced into quantum theory back in 1926—“then describes a sort of blend of not-yet and of already-exploded systems.” Not even Bohr, Einstein crowed in his letter, should accept such nonsense, for “in reality there is just no intermediary between exploded and not-exploded.”7 Nature must choose between such alternatives, Einstein insisted, and so, therefore, should the physicist.

Einstein could have reached for many different examples of large-scale effects with which to criticize a quantum-probabilistic description. His particular choice—the unmistakable damage caused by exploding caches of gunpowder—likely reflected the worsening situation in Europe. As early as April 1933, he had written to another colleague to describe his view of how “pathological demagogues” like Hitler had come to power, pausing to note that “I am sure you know how firmly convinced I am of the causality of all events”—quantum and political alike. Later that year he lectured to a packed auditorium in London about “the stark lightning flashes of these tempestuous times.” To a different colleague he observed with horror that “the Germans are secretly rearming on a large scale. Factories are running day and night (airplanes, light bombs, tanks, and heavy ordnance)”—so many explosive charges ready to explode. In 1935, he publicly renounced his own prior commitment to pacifism.8

Perhaps inspired by their latest exchange, Schrödinger began writing a long essay of his own, on “The present situation in quantum mechanics.” A week and a half after receiving Einstein’s letter about the exploding gunpowder, Schrödinger replied with a novel twist. In place of gunpowder, there was now a cat.

Against the drumbeat of advancing fascism, little wonder that talk of balls in boxes morphed into explosions, poisons, and morbid calculations of life and death.

“Confined in a steel chamber is a Geiger counter prepared with a tiny amount of uranium,” Schrödinger wrote to his friend, “so small that in the next hour it is just as probable to expect one atomic decay as none. An amplified relay provides that the first atomic decay shatters a small bottle of prussic acid. This and—cruelly—a cat is also trapped in the steel chamber.” Just as in Einstein’s example, Schrödinger imagined the appointed time elapsing. Then, according to quantum mechanics, “the living and dead cat are smeared out in equal measure.” Einstein was delighted. “Your cat shows that we are in complete agreement,” he wrote in early September. “A ψ-function that contains the living as well as the dead cat just cannot be taken as a description of the real state of affairs.”9

A few months after Einstein’s September letter, Schrödinger’s now-famous cat example appeared, with nearly identical wording, in the magazine Die Naturwissenschaften.10 But it almost didn’t make it into print. Days after he submitted his draft to the magazine, the founding editor—a Jewish physicist named Arnold Berliner—was fired. Schrödinger thought about retracting the essay in protest, but relented only after Berliner himself interceded.11

Schrödinger’s thoughts that summer were preoccupied with more than just concerns about Berliner’s mistreatment. Schrödinger had made no secret of his distaste of the Nazi regime, and had become downright fatalistic when forced to flee Berlin, musing in his diary, “might it not be the case that I have already learnt enough of this world. And that I am prepared …” Months after arriving in Oxford, a visiting friend noted how unhappy he was, the pressures of displacement compounding the dismal, daily news. In May 1935—just as the Einstein, Podolsky, Rosen paper appeared in print—Schrödinger delivered a 20-minute lecture on BBC radio on “Equality and Relativity of Freedom,” recalling the many times throughout history in which “gallows and stake, sword and cannons have served to free respectable people” from political repression.12 Against the drumbeat of advancing fascism, little wonder that talk of balls in boxes morphed so quickly into explosions, poisons, and morbid calculations of life and death.

While his essay was in press, Schrödinger wrote to Bohr, trying again to discern how Bohr and the others could make peace with the bizarre features of quantum mechanics. As with Einstein, Schrödinger longed to discuss such matters with Bohr in person, “but the times are now little suited for pleasure trips.” Larger questions loomed. Schrödinger wrote of his “wish once again to be somewhere permanently, that is, to know with considerable probability what one is to do for the next 5 or 10 years.”13 Living only with probabilities had taken its toll.

In time, the challenge that Schrödinger thought would undercut quantum mechanics became, instead, one of the most familiar tropes for teaching students about the theory. A central tenet of quantum mechanics is that particles can exist in “superposition” states, partaking of two opposite properties simultaneously. Whereas we often face “either-or” decisions in our everyday lives, nature—at least as described by quantum theory—can adopt “both-and.”

Over the decades, physicists have managed to create all manner of Schrödinger-cat states in the laboratory, coaxing microscopic bits of matter into “both-and” superpositions and probing their properties. Despite Schrödinger’s reservations, every single test has been consistent with the predictions from quantum mechanics. In one recent example, colleagues and I demonstrated that neutrinos—subatomic particles that interact very weakly with ordinary matter—can travel hundreds of miles in such cat-like states.15

There is a double irony, then, to Schrödinger’s tale of his twice-fated cat. First, although Schrödinger’s cat remains well known within (and beyond) physics classrooms, few recall that Schrödinger introduced his fable to criticize quantum mechanics rather than elucidate it. Second, and even more telling: Schrödinger’s cat served, in its day, as synecdoche for a broader world that had become too strange—and, at times, too threatening—to understand.

3. Fine, A. The Shaky Game: Einstein, Realism, and the Quantum Theory University of Chicago Press, Chicago (1986).

4. Kaiser, D. Bringing the human actors back onstage: The personal context of the Einstein-Bohr debate. British Journal for the History of Science 27, 129-152 (1994).

6. Fine, A. The Shaky Game: Einstein, Realism, and the Quantum Theory University of Chicago Press, Chicago (1986). Letter from Schrödinger to Einstein, dated 7 June 1935 and from Einstein to Schrödinger, dated 17 June 1935.

7. Fine, A. The Shaky Game: Einstein, Realism, and the Quantum Theory University of Chicago Press, Chicago (1986). Letter from Einstein to Schrödinger, dated 8 August 1935.

9. Fine, A. The Shaky Game: Einstein, Realism, and the Quantum Theory University of Chicago Press, Chicago (1986). Letter from Schrödinger to Einstein, dated 19 August 1935 and from Einstein to Schrödinger, dated 4 September 1935.