How the Neutrino’s Tiny Mass Could Help Solve Big Mysteries

The KATRIN experiment is closing in on the mass of the neutrino, which could point to new laws of particle physics and shape theories of cosmology. 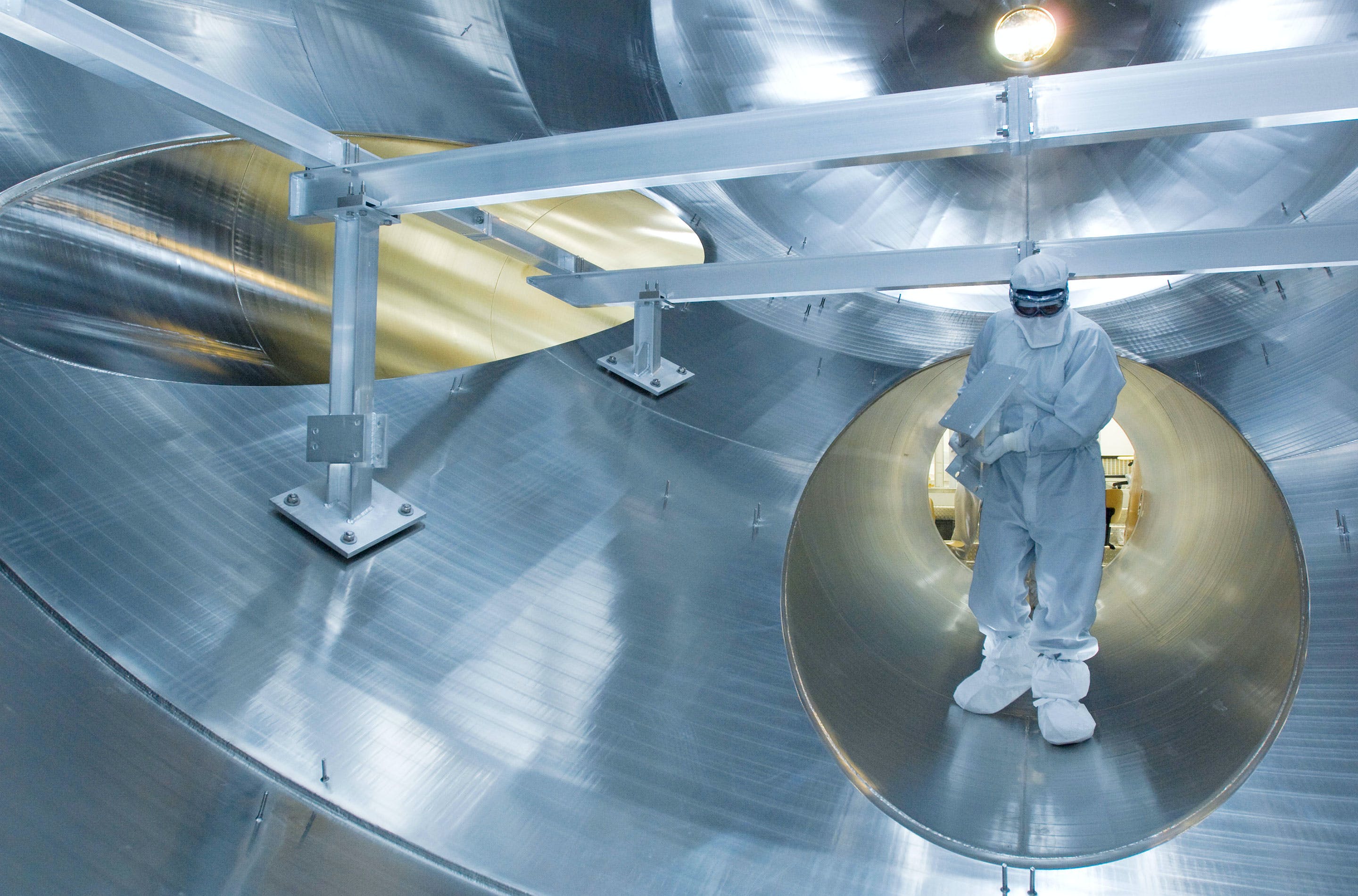 Of all the known particles in the universe, only photons outnumber neutrinos. Despite their abundance, however, neutrinos are hard to catch and inspect, as they interact with matter only very weakly. About a thousand trillion of the ghostly particles pass through your body every second—with nary a flinch from even a single atom.

“The fact that they’re ubiquitous, yet we don’t even know what they weigh, is kind of crazy,” said Deborah Harris, a physicist at the Fermi National Accelerator Laboratory near Chicago and York University in Toronto.

Physicists have long tried to weigh the ghost. And in September, after 18 years of planning, building and calibrating, the Karlsruhe Tritium Neutrino (KATRIN) experiment in southwestern Germany announced its first results: It found that the neutrino can’t weigh more than 1.1 electron-volts (eV), or about one-five-hundred-thousandth the mass of the electron.

This initial estimate, from only one month’s worth of data, improves on previous measurements using similar techniques that placed the upper limit on the neutrino mass at 2 eV. As its data accrues, KATRIN aims to nail the actual mass rather than giving an upper bound.

Mass is one of the most basic and important characteristics of fundamental particles. The neutrino is the only known particle whose mass remains a mystery. Measuring its mass would help point toward new laws of physics beyond the Standard Model, the remarkably successful yet incomplete description for how the universe’s known particles and forces interact. Its measured mass would also serve as a check on cosmologists’ theories for how the universe evolved.

“Depending on what the mass of the neutrino turns out to be, it may lead to very exciting times in cosmology,” said Diana Parno, a physicist at Carnegie Mellon University and a member of the KATRIN team.

Until about two decades ago, neutrinos—which were theoretically predicted in 1930 and discovered in 1956—were presumed to be massless. “When I was in grad school, my textbooks all said neutrinos didn’t have mass,” Harris said.

That changed when, in a discovery that would win the 2015 Nobel Prize, physicists found that neutrinos could morph from one kind to another, oscillating between three “flavor” states: electron, muon and tau. These oscillations can only happen if neutrinos also have three possible mass states, where each flavor has distinct probabilities of being in each of the three mass states. The mass states travel through space differently, so by the time a neutrino goes from point A to point B, this mix of probabilities will have changed, and a detector could measure a different flavor.

If there are three different mass states, then they can’t all be zero—thus, neutrinos have mass. According to recent neutrino oscillation data (which reveals the differences between the mass states rather than their actual values), if the lightest mass state is zero, the heaviest must be at least 0.0495 eV.

Still, that’s so light compared to the mass of other particles that physicists aren’t sure how neutrinos get such tiny masses. Other particles in the Standard Model acquire mass by interacting with the Higgs field, a field of energy that fills all space and drags on massive particles. But for neutrinos, “the mass is so small, you need some additional theory to explain that,” Parno said.

Figuring out how neutrinos acquire mass may resolve other, seemingly related mysteries, such as why there is more matter than antimatter in the universe. Competing theories for the mass-generating mechanism predict different values for the three mass states. While neutrino oscillation experiments have measured the differences between the mass states, experiments like KATRIN home in on a kind of average of the three. Combining the two types of measurements can reveal the value of each mass state, favoring certain theories of neutrino mass over others.

Neutrino mass is also of cosmic importance. Despite their minuscule mass, so many neutrinos were born during the Big Bang that their collective gravity influenced how all the matter in the universe clumped together into stars and galaxies. About a second after the Big Bang, neutrinos were flying around at almost light speed—so fast that they escaped the gravitational pull of other matter. But then they started to slow, which enabled them to help corral atoms, stars and galaxies. The point at which neutrinos began to slow down depends on their mass. Heavier neutrinos would have decelerated sooner and helped make the universe clumpier.

By measuring the cosmic clumpiness, cosmologists can infer the neutrino’s mass. But this indirect method hinges on the assumption that models of the cosmos are correct, so if it gives a different answer than direct measurements of the neutrino mass, this might indicate that cosmological theories are wrong.

So far, the indirect cosmological approach has been more sensitive than direct mass measurements by experiments like KATRIN. Recent cosmological data from the Planck satellite suggests that the sum of the three neutrino mass states can’t be greater than 0.12 eV, and in August, another analysis of cosmological observations found that the lightest mass must be less than 0.086 eV. These all fall well below KATRIN’s upper bound, so there’s no contradiction between the two approaches yet. But as KATRIN collects more data, discrepancies could arise.

The long-awaited KATRIN experiment weighs neutrinos by using tritium, a heavy isotope of hydrogen. When tritium undergoes beta decay, its nucleus emits an electron and an electron-flavored neutrino. By measuring the energy of the most energetic electrons, physicists can deduce the energy—and thus the mass (or really, a weighted average of the three contributing masses)—of the electron neutrino.

If KATRIN finds a mass of around 0.2 or 0.3 eV, cosmologists will have a hard time reconciling their observations, said Marilena Loverde, a cosmologist at Stony Brook University. One possible explanation would be some new phenomenon that causes the cosmological influence of the neutrino’s mass to wane over time. For instance, maybe the neutrino decays into even lighter unknown particles, whose near-light speeds render them incapable of clumping matter together. Or maybe the mechanism that gives mass to neutrinos has changed over cosmic history.

If, on the other hand, the neutrino mass is close to what cosmological observations predict, KATRIN won’t be sensitive enough to measure it. It can only weigh neutrinos down to 0.2 eV. If neutrinos are lighter than that, physicists will need more sensitive experiments to close in on its mass and resolve the particle physics and cosmology questions. Three potentially more sensitive projects—Project 8, Electron Capture on Holmium, and HOLMES—are already taking data with proof-of-concept instruments.