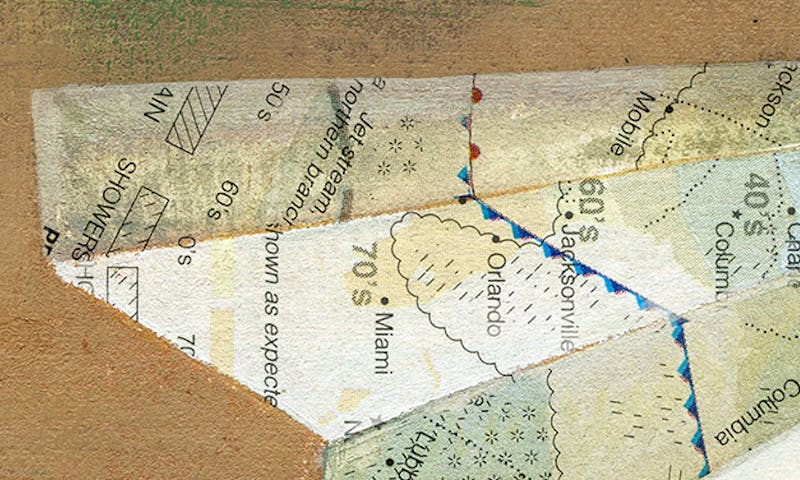 One of the first weather derivative agreements involves everyone’s favorite energy company, Enron.1 In 1996, Koch Energy, owned by Kansas billionaires
Charles and David Koch, approached Enron to negotiate something like an
insurance policy. But it was not something they could buy from regular
insurers. They weren’t looking for insurance against a catastrophic event like
a hurricane or a blizzard, something that might damage their plants or
pipelines. Instead, they wanted protection from something much less alarming: a warm winter in Wisconsin in the following year. Their profits depended on the demand for natural gas, and warm winters, when people used less heat, were costly. So Koch and Enron entered into a negotiation over probabilities.

Like
a standard insurance policy, then, Koch and Enron were buying protection from
one another. Unlike a standard insurance policy, the payout was not based on
after-the-fact damage assessment. No insurance claims adjuster was involved,
and no proof of damage was required. The payout was, instead, indexed
mathematically to exact, pre-agreed-upon metrics: the data
collected at a particular set of Milwaukee weather stations. The contract was
signed far in advance of any reasonably accurate weather forecast.

A
smattering of other weather derivative deals were made in 1996, as well. Aquila
Energy and ConEd arranged for a derivative based on “Cooling Degree Days,” the
inverse of HDDs, using data from the weather station in Central Park in New
York City. Since then, the market has grown rapidly. The roster of weather
derivative buyers now includes ski slopes and golf courses, wind and solar
energy farms, the biggest public utilities and oil companies, crop farmers, and
airlines. These financial instruments
can be bought and sold on publicly traded markets like the Chicago Mercantile
Exchange,
which trades
in standardized weather derivatives and estimates that more than
$25 billion worth were written in 2012. Koch Industries has become
a significant player in the market, both selling and buying derivatives.

To
see the appeal of a weather derivative to a buyer, consider the John F. Kennedy
International Airport in New York City. The Port Authority of New York, which
manages the airport, expects a little more than 23 inches of snow a year.  Bordering the Atlantic Ocean on Jamaica Bay,
JFK has 25 miles of taxiways and 9 miles of runways. According to Martin
Malinow, president of Endurance Global Weather, a company that writes
weather-related derivatives to cover risks not already handled by standard
insurance policies, it
could cost an average of approximately $1 million an inch to clean snow off
this network.  “If you have a year
that is very snowy —50 inches—they are going to
incur an extra $27 million in expenses,” says Malinow.

The
standard procedure would be for the airport to maintain a cash reserve—a
“snowy season fund”—on its books of $27 million, ensuring
it could cover expenses for a 50-inch snowfall year. But holding that much cash
at the ready incurs a significant lost-opportunity cost, since that
money could be invested elsewhere, and also because the snow may never come.
Standard insurance companies are not interested in protecting JFK from slightly
above-average snowfalls, because their policies
almost always deal with physical damage or loss of business, not managing
maintenance budgets.

Instead,
JFK administrators might elect to buy a weather derivative. For a premium of,
say,
$4 million, they are guaranteed that all expenses for snow removal are covered
at $1 million an inch for snowfall exceeding 23 inches—the average
snowfall—but
less than 50 inches. Such “noncatastrophic”
coverage typically costs anywhere from 10 percent to 30 percent of the maximum
payout, or “face amount.” A maximum payout of $27
million might draw a $4 million premium, indicating that the risk of that
maximum is around 15 percent. The seller of the contract would be betting that
an annual snowfall of 50 inches might be expected to occur less than every
seven years or so. The more likely an event is to occur, the higher the premium
will be.

Derivatives
can also afford coverage for more extreme weather events, like
blizzards, which can torpedo the runway-maintenance
budget of the airport authority for the entire year. This makes them a one-stop
shop. The Chicago Mercantile Exchange (CME) offers hurricane derivatives,
nicknamed “CATS”— an abbreviation
for catastrophe—for nine different regions. Hurricane derivatives are usually bought by
large investors, such as insurance companies or energy producers, and utilize a
mathematical index called the CME Hurricane Index (CHI), defined to be the
highest sustained wind multiplied by the radius of the storm. Some hurricane
derivatives are based on the sum of the CHI numbers of all hurricanes in a
season, while others—known as “CATS-in-a-Box”—cover
potential damage for a particular territory.

Derivative
sellers rely on their premiums exceeding their payouts. To insure
that this happens, sellers like Endurance Global Weather write dozens of
different derivative contracts on many independent types of weather
probabilities. By doing so, they hedge the risk of needing to make a big payoff
on multiple severe weather events at the same time. “We are going to have 20 of
those deals in our portfolio around the world, not just JFK snow in the
winter,” says Malinow.
“It’s going to be London temperature in the winter; it may be Australian
rainfall in the summer. It is basically going to be a big, diversified
portfolio.”

Similarly,
buyers of weather derivative products on open exchanges like the Chicago
Mercantile Exchange are using derivatives to diversify their personal risk
portfolio. After all, a Wall Street crash will not, in general, be related to heavy
weather that might cause their derivative portfolio to suffer. Even traditional
insurance companies are purchasing derivatives as a way to reinsure their own
risks, tapping into public markets, which can offer
more rapid adjustments to risk than can
traditional reinsurance companies, which often
write policies a year or more in advance. By commoditizing the
weather through a tradable instrument based on precise and generally public
information, weather derivatives have become a valuable risk-management
tool.

Of
course, that information is the key to any weather derivative transaction. In
the United States, the publicly run National Weather Service collects data
across the globe via satellites, airborne instruments,
radar, and other ground sensors, and distributes it for free on its website. Reports are produced hourly, and have become significantly
more accurate over time. Recently, an enhanced radar known as  “dual-pol”
(dual-polarization) Doppler radar became fully operational
nationwide. The result of about 30 years of research and development
efforts, it uses both horizontally and vertically polarized radar emissions to
determine the shape of the objects it scans.2

But
because weather information is essential for making decisions in derivatives
trading, a $3 billion-a-year private forecasting
industry has sprung up in parallel to the national service. Some private
companies provide weather probabilities for specific locations and industries
by customizing public weather data. And there are general private weather
forecasters, such as Weather Services International (WSI), the professional
business forecasting arm of The Weather Channel Companies. In an environment
vaguely reminiscent of high-frequency trading, derivatives traders angle for an
edge—even
in split
seconds—by using every tool, public or private,
at their disposal. Some private forecasters and traders pay extra for a line
directly hooked into government computers that provides them with a real-time
feed of raw weather data as it is collected.

“By
the time the information reaches consumers, the traders have already made their
bets,” says Andy Rice of WSI. “It is a matter of milliseconds.” WSI illustrates
its data
in three dimensions, with fine spatial and temporal granularity. According to Rice,
new radar pictures are changing the understanding of risk levels. “In energy
markets, WSI will actually predict how much wind Texas is going to produce in
terms of megawatts, hour by hour, for 15 days,” Rice says.

Today,
the weather derivative market is confined largely to temperature-based weather
derivatives covering energy and agriculture. The next wave of computing and
meteorological improvements will make forecasts more accurate and more local,
allowing companies to structure derivatives more easily. With the U.S.
Department of Commerce estimating that one-third
of the U.S. economy is directly affected by weather, more and more businesses
are regarding derivatives as essential, rather than exotic, forms of protection.
And more eyes than ever are on the weather. After all, just an afternoon’s rain
might be an insurable event.