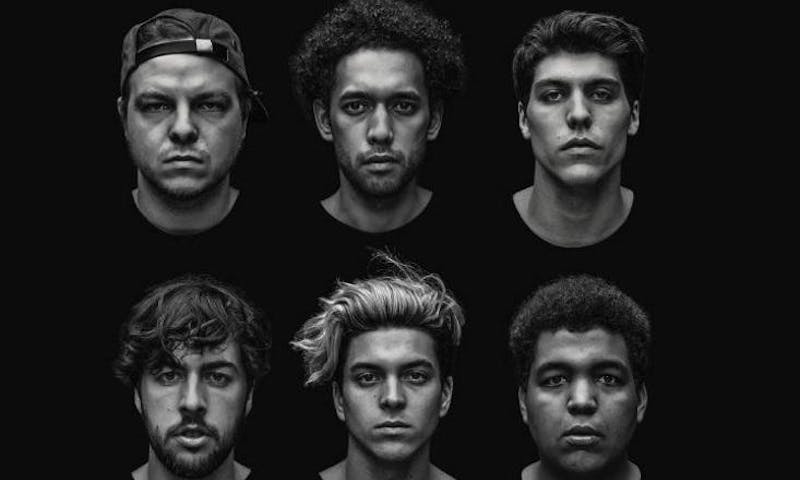 Recently a Quebec arts foundation required the Francophone rap group Dead Obies to give back an $18,000 grant they’d been awarded to record their newest album. The problem? A word count determined that the group had stirred too much English into their distinctive multilingual lyrics, falling short of the rule that 70 percent of the content be in French. Here’s an example from the first track of their album Gesamtkunswerk:

Dough to get
I got more shows to rip
Dead-O on the road again, c’est mon tour de get
Sous le spotlight, viens donc voir le dopest set
We just gettin’ started et pis t’es captivated
Looking at me now, thinking: «How’d he made it?»
J’suis tellement plus about being felt que famous
Que même moi, j’sais plus what the hell my name is

Dead Obies is used to catching flak for their language mixing. In 2014, they were excoriated by several French-language journalists for their mongrel lyrics. Christian Rioux, writing for Le Devoir, suggested that such language practices were “suicidal” and would likely result in the formation of a “mediocre creole” incomprehensible to speakers of proper French or English. These comments are part of a long history of Quebecers’ concerns over preserving the province’s Francophone identity, with many language rules enacted to serve as dikes to keep English from flooding in on all sides and drowning the French language.

Bilingual band member Yes McCan (real name: Jean-François Ruel) fired back in a CBC interview, scoffing at the notion that he and his bandmates were incapable of speaking “proper” French or English. He defended the group’s language mixing as a natural outgrowth of their multi-ethnic and multilingual reality that allowed them to extend the expressive range of their lyrics. And he challenged his critics to provide evidence for the claim that such multilingual practices were causing the erosion of French in Quebec. “Basically, I was really deploring the lack of scientific and statistical backing by these people who are saying that French is going away,” he said.

Shana Poplack, a linguist who has studied language mixing in Canada for more than three decades, is only too happy to jump into the debate with some hard evidence. She has collected a massive body of spoken-language data from the urban area that straddles the river dividing Ottawa, the nation’s English-speaking capital, from Hull, on the French-speaking Quebec side. Many speakers within this region are bilingual, and French and English have been in close contact here for more than two centuries.

One of Poplack’s early discoveries was that language mixing by bilingual speakers, far from being a sign of deficiency in either language, is often a badge of linguistic prowess. The switches between languages may appear random at first glance, but they are not; the languages are sutured together at just those points where their syntax happens to align.

For example, imagine switching from Spanish, in which nouns come before adjectives, into English, where adjectives precede nouns. If you made the switch by saying a Spanish noun followed by an English adjective—as in, “mi coche red” (my car red)—you’d be running afoul of English word order, so chances are, you’d avoid blending at this point. According to Poplack, bilingual speakers skillfully maneuver their way around such linguistic collisions, which requires that they keep in mind the grammatical requirements of both languages while speaking. Not surprisingly, she has found that people who readily switch between languages in the manner of Dead Obies tend to be highly proficient in both.

The conversations of my own Montreal childhood swung pleasurably between languages, so I wasn’t surprised to hear Poplack say that every bilingual community ever studied has been found to blend their languages. As in the lyrics of Dead Obies, this is often done for expressive purposes. Sometimes speakers switch from one language to another to set a portion of the sentence apart, to draw attention to it. For example, they may want to highlight the aptness or connotations of a particular word or phrase in that language, as in these examples from Shana Poplack’s dataset of bilingual speakers in Ottawa-Hull:

More generally, Mark Myslín and Roger Levy found that bilingual Czech-English speakers inserted English words into mostly Czech frames to express content that was informationally dense—that is, content that was highly unpredictable on the basis of the surrounding context. Here, language switching acted as signal that the sentence was veering off in an unexpected direction.

Within the community of Montreal rappers, language mixing is being pushed to new extremes, swirling together not just French and English, but also African American English, Haitian Creole, Jamaican Creole, and Spanish. This extended linguistic palette provides the musicians with an exhilarating array of options for creating rhymes and rhythms, as shown off here in lyrics by MC Dramatik of the group Muzion, setting up a rhyming scheme that draws on English (blow), African American English (yo), Spanish (loco) and Haitian Creole (popos):

Et blow yo, quand le système est loco, t’entends des sirènes des popos. (“And blow yo, when the system is crazy, you hear the cops’ sirens.”)

Mela Sarkar, who has studied language mixing within the Quebec hip hop community, argues that this linguistic cocktail is the unintended result of language laws aimed at preserving French: In 1977, the Quebec government passed Bill 101, a law that, along with establishing French as the required language for a range of services, decreed that new immigrants had to send their children to French schools. Before Bill 101, almost all immigrants chose to have their kids educated in English. The law had the effect of funneling massive numbers of immigrant children, many of whom did not speak French before their first day of school, into the Francophone school system, where they shared playgrounds and cafeterias with kids from dozens of different countries.

In Montreal, where immigration rates were the highest, this created a generation of Francophone youngsters for whom multilingualism—and hence exuberant language mixing—was utterly normal. As evident from the CBC interview with Dead Obies’ Yes McCan, this generation has some trouble relating to the older generation’s anxieties about language purity. To them, language mixing represents what is great about Montreal.

The new post-Bill 101 generation is proficient in multiple languages, but what linguistic legacy will it leave? Will its spontaneous language mixing trigger mutations within the French language, as predicted by defenders of French like Christian Rioux? While languages that are in close contact with each other do sometimes fuse into entirely new ones—as happened in the case of Mednyj Aleut, a native-Alaskan language that imported the entire complex system of Russian verb endings—Shana Poplack believes that such fears are wildly overblown in the case of Quebec French.

Some apparent examples of English incursions into French fail to hold up under a scientific eye. For example, many Francophones in Quebec now leave prepositions stranded at the ends of sentences, saying “la fille que je sors avec” (“the girl I’m going out with”) rather than the prescribed “la fille avec qui je sors” (“the girl with whom I’m going out”). Since English speakers (aside from a few hard-nosed grammarians) almost always strand their prepositions, this change has been flagged as a prime example of contamination from English. But Poplack’s detailed analysis reveals that the two structures, while superficially similar, actually pattern in very different ways in the two languages. She provides compelling evidence that the language change actually originated within French, as an extension of the tendency of Francophones to “orphan” their prepositions, saying, for example, “Il veut pas payer pour” (“He doesn’t want to pay for”). Especially striking is that even the most prolific of language mixers maintained a strict separation between the French and English patterns (stranding and orphaning prepositions, respectively), suggesting that the two systems are showing no signs of converging.

Even the oft-maligned borrowing of English words (“fun,” “cute”) into Quebec French remains negligible, at less than 0.5 percent of Poplack’s dataset of 3.5 million words. The vast majority of borrowings of English words into French simply do not stick, just as neologisms within monolingual communities, such as BFF or chillax, tend to be transient.

What remains unknown is whether the public performance of language mixing, and the comfort with multilingualism that it puts on display, will loosen emotional allegiances to the French language. It’s worth noting that Quebec rappers used to perform mainly in English, and the visibility of French has actually increased over time. And as long as Bill 101 remains in place, privileging French as the dominant language of business and government, the abandonment of French seems very unlikely; the economic and social penalties for not speaking French are simply too great. But the example of Dead Obies and others of their generation hints at the possibility that French will increasingly have to share the streets of Montreal—and the hearts of many of its citizens—with other languages.