Looking at Art Through Different Eyes—Like a Bee 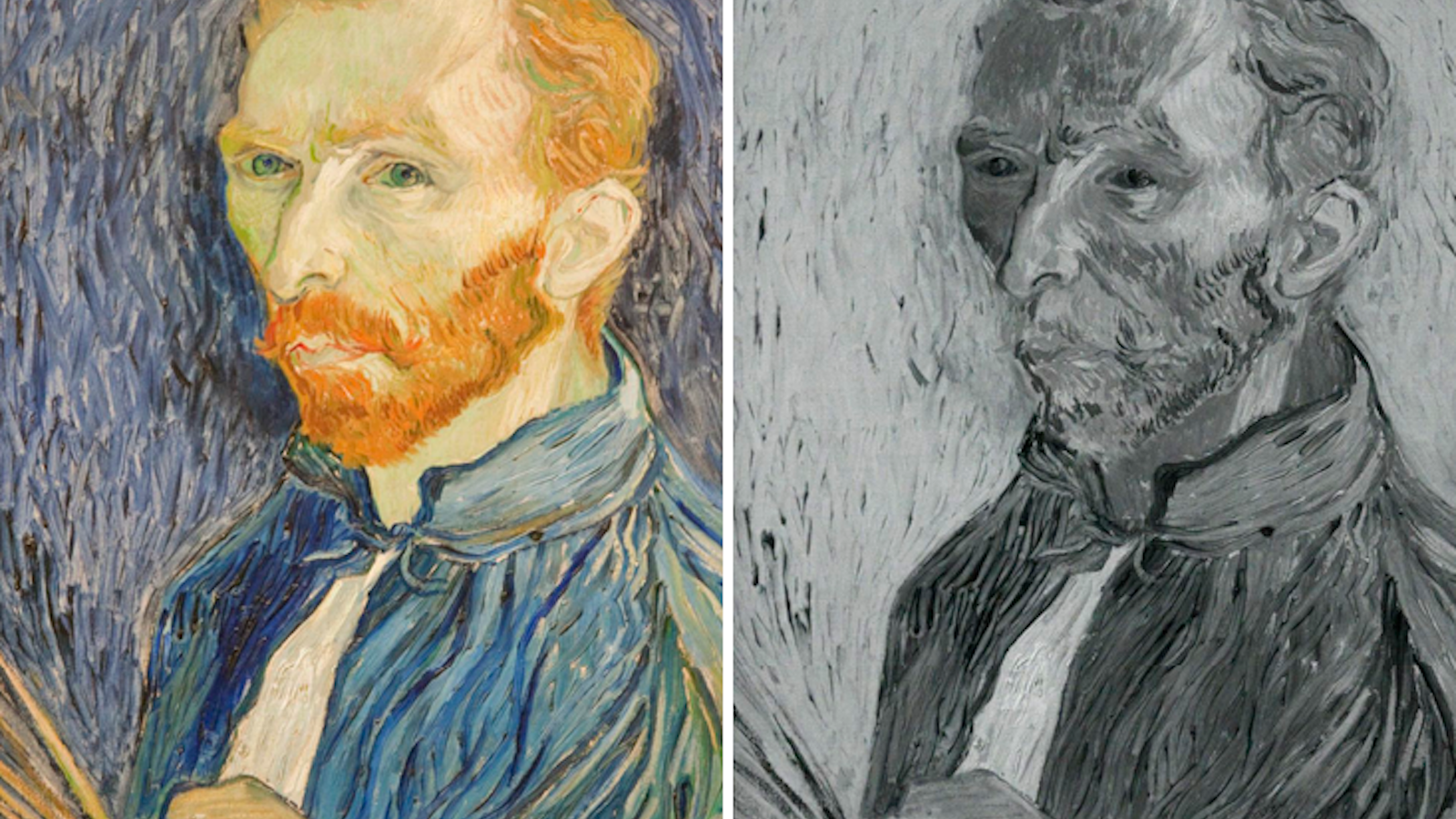 There is more to the world than
meets the human eye, a fact that hit home for the 18th-century
astronomer Sir Frederick William Herschel when he discovered infrared light—a wavelength of light that lies
just outside the visible portion of the electromagnetic spectrum. We
can feel its heat, but we can’t see the light—not without special
equipment designed to be sensitive in this regime.

It’s somehow fitting that this
invisible form of radiation is now used by infrared telescopes to
“see” through interstellar dust in our universe to image distant,
hidden galaxies, among other celestial objects—not to mention the
increasingly common use of infrared (IR) photography here on Earth. A
simple image of a park on a sunny day is transformed in the infrared
into an eerily surreal landscape, simultaneously familiar and alien.

That’s because many materials
reflect, absorb, and transmit infrared light differently than they do visible light: Reds and
greens appear lighter, while blues and browns appear dark. A clear
sky will appear very dark, except for the occasional white cloud;
vegetation, like trees, reflects IR and will appear extremely bright
in an infrared image—unless the tree in question is dead or
diseased, in which case it reflects less IR and shows up dark. Photograph a person in the
infrared and the skin will look chalky, eyes will show up as dark
spots, red lips will be deathly pale, and dark brown hair will appear
nearly white.

Those contrasts are precisely what
makes IR photography such a useful tool for tasks like studying plant
diseases; detecting fiber irregularities in the textile industry; and
forensic imaging of cloth, fibers, and hair, among other uses.
Infrared imaging is also a standard laboratory tool for analyzing
faded, damaged, or altered documents, because the differences between
pigments, dyes, and inks show up clearly in IR. This makes it easy to
determine if there is writing underneath a top layer of text, for
example.

That’s where Charles Falco’s
interest lies,
and he’s in very good company. In addition to looking at things in
the infrared, scientists have also studied paintings, documents and
other artifacts using synchrotron radiation (and X-rays in general).
For example, in 2008, European scientists used synchrotron radiation
to reconstruct the portrait of a peasant woman painted by Vincent van
Gogh that the artist had then painted over when he created 1887′s
“Patch of Grass.”

An optics professor at the
University of Arizona, Falco made headlines in the art world over a
decade ago through his controversial collaboration with David Hockney on the possible
use of optical tracing aids by certain Dutch masters, like Jan van
Eyck. But his interest in photography goes back even further, to his
childhood in Orange County, California. He took his first
photographs when he was just 5 years old.

His mother, a widowed schoolteacher,
bought him a camera for Christmas when he was 12, and he brought it
to the Griffith Park Observatory in Los Angeles, among other
settings. “I took a picture of the moon through the eyepiece
telescope,” he recalls. In fact, he credits his childhood passion
with sparking his interest in optics.

It was only a matter of time before
he discovered infrared photography, and figured out it could be
useful in analyzing fine art. Because many pigments show up as
semitransparent in this regime, infrared imaging can reveal details
in paintings, thereby shedding light on the decisions the artist made
while creating the final piece. “If an artist has made markings on
the canvas and then covers it with blue paint, I can be the first
person in hundreds of years to see those markings,” he says. “Even
if they’re trivial marks, every time I see them, it’s
tremendously exciting.”

Infrared imaging has been used to
analyze old documents and works of art since the 1960s. But the
equipment typically used by conservators for this kind of analysis is
bulky and pricey; the systems can run more than $100,000. Falco has developed a hacked hand-held version
[pdf]—not
as precise in resolution, but cheaper and more portable, making it
possible to image paintings right on the walls they adorn.

The first infrared photographs were
taken in the 19th century, although the practice did not become
common until the invention of IR films in the early 20th century and
the concurrent development of special infrared filters. The rise of
the digital camera removed the need to fuss with chemicals and
special films. The image sensors used in digital cameras are already
sensitive to infrared light; in fact, they come equipped with filters
to remove it. Take out the filter and replace it with another that
blocks visible light and voila! You’ve got yourself a digital
infrared camera.

Falco bought a used Canon 30D on
eBay and converted it into an infrared camera and has used it to
photograph paintings of interest in museums around the world:
Washington, DC’s, National Gallery of Art, the State Hermitage
Museum in St. Petersburg, and Tokyo’s National Museum of Western
Art, to name a few. All told, he spent about $2,000. Ideally, he
takes pictures in both the visible and the infrared, loads them into
Photoshop, and then toggles back and forth between the two, looking
for telling differences.

It’s the portability of Falco’s
device that confers the biggest advantage, since paintings and other
works of art would otherwise need to be removed and sent to a
laboratory for this kind of analysis. Even assuming a museum curator
at the Louvre would grant permission to do so—thereby risking the
wrath of patrons who may have come just to see that particular
canvas—it’s still an expensive and time-consuming process, and
there is no way of foreseeing which paintings would yield interesting
details from such analysis.

Falco estimates that it would take
400 years to photograph every painting in the Louvre by sending them
away. Working five days a week with his machine, he could image them
all (including those in storage) in just one year. True, the
resolution wouldn’t be as high, but his hand-held device makes it
possible to sift through an entire collection and pick out those
worthy of further analysis.

Falco can also jigger his camera to
photograph ultraviolet light, which can
reveal otherwise hidden details, most notably fluorescence. Birds,
bees, and other insects, for example, are sensitive to ultraviolet
light; bees use it to locate nectar-rich flowers for pollination.

But UV photography is much difficult to do since UV light usually doesn’t pass
through the glass of the lens. Falco’s solution? Buy a bunch of old
lenses off eBay and painstakingly test each one with a spectrometer
to see if any would transmit in the near-ultraviolet regime. Finally,
he found a lens that for some unknown reason had just the right
optical properties to allow a little near-UV light through, and he
used it to build a handheld UV camera. Now he can see what a bird or
a bee would see when looking at the Mona Lisa in the Louvre.

Jennifer Ouellette is a science
writer and the author of The Calculus Diaries and the forthcoming Me,
Myself and Why: Searching for the Science of Self. Follow her on
Twitter @JenLucPiquant.