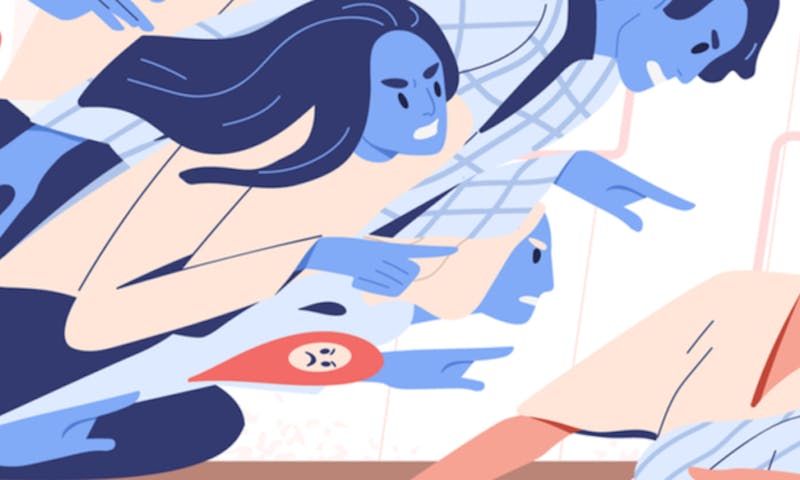 A few years ago, Time magazine published an article titled, “Cell-Phone Distracted Parenting Can Have Long Term Consequences.”1 It reported research supposedly showing that “distracted parental attention” could hurt infant development, and especially a baby’s ability to feel pleasure later on. What exactly did this research study? Did it directly measure parental cell phone usage and test infant cognition? Did it carefully document day-to-day distractions in the lives of caregivers?

Not exactly. The article was based on the results of a single study where researchers deprived rats of nesting material.2 These stressed rat mothers provided fragmented care to their pups, who, researchers later found, went on to develop emotional problems—as measured by their likelihood to consume sugar solution (low) and play with peers (low). Using animal models to tell us something about humans is entirely routine, and this scientific technique is an important one when it is costly, difficult, or unethical to experiment on humans directly. But it raises methodological problems. Rats aren’t humans, and insufficient bedding is not cell phone use.

Articles that make confident claims about parenting on the basis of shoddy evidence can fuel the fire—giving mommy-shamers unwarranted confidence to scold parents.

Can we really draw conclusions about people using rat models? The answer is “yes,” but we have to be careful in doing so. We need critical thinking about which features of a rat experiment do or do not match up with features of the human condition. In this case, a bit of critical thinking reveals that very little is shared between the experiment and its target. Clearly someone in the science-to-public process got tempted by the desire to tell a big, juicy story, rather than stick to a particularly accurate portrayal of the research. The problem is that this is all too common when it comes to popular work on parenting, and parents suffer as a result.

That was, of course, far from the first popular science article to draw questionable conclusions from scientific research. A few years ago, a set of popular articles with titles like “Drinking a Glass of Red Wine is as Healthy as an Hour at the Gym,”3 reported research on resveratrol, a component in red wine. The study fed resveratrol to rats and found that it improved their exercise performance. But the study said almost nothing about wine, or about exercise in humans. As the lead author later pointed out, “If you’re drinking red wine to get resveratrol, you would have to drink anywhere from 100 to 1,000 bottles per day.”4

While this sort of misreporting is nothing new, the Time article reflects a wider, worrying trend—the use of scientific findings to promote unrealistic standards for modern parents. The term “mommy shaming” was added to Urban Dictionary in 2017 following a number of high-profile cases where mothers were publicly shamed for their parenting choices. In 2016, for instance, a lowland gorilla named Harambe had to be shot after a 3-year old climbed into his enclosure. The event was followed by a massive Internet pile-on blaming the child’s mother for Harambe’s death.5 She was widely criticized for failing to watch her child, and for not jumping in after to save him.

Of course, the vast majority of mommy-shaming happens in a much more mundane way. Most mothers will have stories—strangers commenting on breastfeeding choices, in-laws expressing dismay at a child’s lack of discipline, the cashier who thinks junior is too old for a pacifier. I myself have never forgotten the older man who shouted at me to put a hat on my baby on a cool, cloudy day in February. Of course, fathers get these comments too, but mothers, as the public face of parenting, are the disproportionate victims of mommy-shaming.

Why do mommy-shamers feel justified in sharing un-asked-for judgments with people they may not even know? These judgments are often motivated by a desire to do right by the child. It has been pointed out that during the COVID-19 pandemic mommy-shaming has reached a fever pitch6 as parents make new, difficult decisions about schooling, podding, and quarantining, often under enormous uncertainty. The people involved in these debates desperately want to protect the children involved.

But despite good intentions, specific instances of mommy-shaming are often harmful and unjustified. In many cases mommy-shaming involves advice that makes life harder for parents, and offers minimal, if any, benefits for the child. In other cases, like those surrounding COVID-19, the people involved simply cannot know whether their opinions are the right ones, regardless of how certain they may feel.

Popular science articles that make confident claims about parenting on the basis of shoddy evidence can fuel the fire—giving mommy-shamers unwarranted confidence to scold and cajole parents. And what’s worse, too often these articles reflect social beliefs about what parents ought to do, rather than the other way around. While it may seem like science should lead the charge in establishing good parenting guidelines, instead norms about parenting tend to shape how the science is interpreted and communicated. This can lead to a vicious feedback cycle.

Philosophers of science argue that, when interpreting scientific results, we always, necessarily, draw on a broad web of shared belief. This has to be the case, because without some theory to help us understand the world, our observations do not mean much. In cosmology, for instance, it takes an enormous amount of background knowledge to know that certain patterns of vibrations on Earth indicate the collision of black holes 1.3 billion light-years from us. To make this jump from data to theory, we need to know about black holes, about gravitational waves, about our sensors, etc. In cases like this, it isn’t bad to use our current beliefs to understand what we observe in science—it’s necessary. But things can go wrong when doubtful social beliefs come into play.

Let’s turn back to the rats study. Should moms be focusing on their phones and not their kids? Your gut might tell you “no.” It just feels wrong. Generally, we have an idea in our society that moms should be attentive 100 percent of the time at the risk of depriving kids of the love they need to flourish. A good mother should always be thoughtful, patient, and deeply focused on her children.

Given these beliefs, we shouldn’t be surprised when we see an article confirming what we already think—moms shouldn’t be on their cell phones. Social beliefs, about what moms ought to be doing, come into play when we determine whether rats without bedding tell us something about moms answering work emails at the park. If we didn’t already have a suspicion that the mom laughing at funny memes is shirking her duties, we might be more skeptical about the applicability of this study to humans.

This pattern repeats itself again and again. While parents are shamed for using cell phones themselves, they are also shamed over children’s screen time. In 2019, it was widely reported that cell phone use was leading to the growth of “horns,” especially in teenagers.7 The central claim was that head position during cell use prompted bone spurs—relabeled as “horns” by overenthusiastic journalists—to form at the back of the neck. Critics quickly pointed out issues8 with the original study9—that there was no actual measure of cell phone use, that the sample was drawn from chiropractic patients rather than the general population, and that there were contradictions in the data. But the message was already out there: Cell phones are literally reforming the bone structure of teens! In part, this is a story about poor research, but it is also a story about a public very ready to believe that cell phones harm children.

It is incumbent on both scientists and journalists to take better care when interpreting and communicating research.

Diet is also a hot topic when it comes to social beliefs about what people, and especially mothers, ought to be doing. Take a press release this month, out of the University of California, Riverside, which proclaims, “Eating too much fat and sugar as a child can alter your microbiome for life.”10 Again, the original study was performed on mice, not humans.11 The article implies, though, that early diet can decrease a human child’s microbiome diversity after puberty, causing lasting harm from failures to provide ideal nutrition.

It makes perfect sense to find out as much as we can about how best to raise our children. The problem arises when our social expectations shape the ways we interpret scientific data so that it confirms those exact social expectations. Then science just becomes one more stick to prod parents with: A Daily Mail article12 draws on research of 40-day-old hamsters to claim that teenage sex leads to mood disorders later in life; a summary of research13 in Science claims that parents who don’t talk enough to their babies stunt their word processing development even though the results rely on correlational data in houses high and low in socioeconomic status, rather than establishing a true causal link; a CBS article,14 again based only on correlational data, suggests that giving children too much candy may cause violent, criminal behavior later in life. We could go on and on,15 looking at the history of reporting on fetal alcohol syndrome, “crack babies,” “refrigerator mothers,” etc.

Part of the problem here stems from the way that data flows from the scientific community to the rest of society. Scientists are under pressure to yield “big-impact” findings. Results that get a lot of attention tend to get more citations, garner invitations to speak and publish, and lead to more successful scientific careers. This sometimes creates perverse incentives, where scientists benefit by presenting their research in the most exciting light, rather than with maximal accuracy. And scientists are savvy enough to understand that an article about cell phone use in parents will be much more impactful than one about bedding supplies in rats. A host of background beliefs and assumptions help determine what interpretations of evidence will be palatable, and those beliefs are not necessarily friendly to parents.

Scientists are not the only ones seeking to drive readership. Journalists, likewise, are under enormous pressure to produce pieces that capture attention. And, likewise, they understand that an article about the dangers of teen sex is much more likely to go viral than an article about the dangers of sex in hamsters. Across the pieces discussed in this article, in some cases the scientists involved promoted irresponsible interpretations of their work, in other cases journalists took liberties in communicating otherwise responsible science. It is incumbent on both scientists and journalists to take better care when interpreting and communicating research.

So, if you read something that sounds suspiciously mommy shame-y, or otherwise conveniently flatters self-serving beliefs you already hold, take a few minutes to dig deeper. Do the results really support the claims being made? Or are the writers using science to simply reinforce our strong feelings about what moms ought to be doing? In the case of red wine and exercise, based on my correspondence with the lead author on the study, it seems that a journalist simply invented the “one glass of red wine = one hour of exercise” claim, and others followed suit in a bizarre game of science-communication telephone.

Cailin O’Connor is a philosopher and evolutionary game theorist and associate professor in the Department of Logic and Philosophy of Science at U.C. Irvine, where she directs the Philosophy, Political Science, and Economics MA program. She is the co-author of The Misinformation Age: How False Beliefs Spread and The Origins of Unfairness. Follow her on Twitter @cailinmeister.

7. Stanley-Becker, I. “Horns” are growing on young people’s skulls. Phone use is to blame, research suggests. The Washington Post (2019).