Splitting Image: The Alternate Realities of the Multiverse 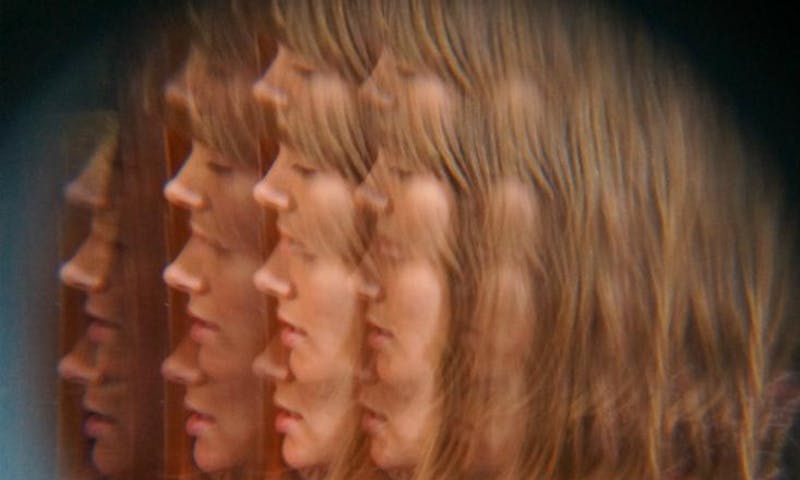 We
tend to focus on major decisions as having momentous effects, but
what if something as simple as a missed train could change the course
of your life? And what if you follow two different paths to see which
turned out better? That’s the premise of the 1998 film Sliding Doors, in
which Gwyneth Paltrow stars as a young woman named Helen who has just
been fired from her job with a prestigious public relations firm in
London. Dashing down the stairs of the Tube station, she gets to the
platform just as the car doors slide shut, missing her train.

Or
does she? The next scene features a replay, in which a split-second
change in timing results in Helen just barely catching her train. One
Helen stands despondently on the platform as the train pulls away,
while the other Helen takes a seat next to a friendly young man named
James (John Hannah.). And events unfold quite differently for our two
Helens over the remainder of the film, with profound implications for
her future.

The
notion of parallel worlds, or alternate timelines, in which we get to
explore all the roads not taken, is a time-honored trope in science fiction—at least since 1923, when H.G. Wells published Men
Like Gods,
in which travelers cross into a parallel world that split from our
own some 3000 years ago. Quantum mechanics was still in its infancy
then, but 30 years later, a young physicist named Hugh Everett III
proposed a controversial interpretation of quantum mechanics in which every possible forking of every possible path is realized in
its own separate universe. Today it’s known as the many worlds interpretation.

It
started out as a brainstorming session over sherry with colleagues,
but by 1957, Everett had developed his idea into a full-length dissertation [pdf]. A
philosophical sticking point in quantum mechanics is the idea of
superposition of states. In any quantum system (e.g., a subatomic
particle like a photon or an electron), every possible outcome for an
experiment is present simultaneously in a sort of super-imposed limbo
state. The sum, or superposition, of all those uncertain outcomes is
described by an equation known as the wave function. It’s only when
we check to see what happened by making a measurement that the wave
function collapses and all those possibilities reduce to a single
“real” event.

But
what happens to those other possibilities once the wave function has
collapsed? The strictest interpretation of quantum theory dodges the
question and simply assumes they vanish by necessity. Everett
suggested that perhaps the wave function continues to evolve instead. Every
potential outcome contained in the wave function—a photon appearing
as a particle or wave, or
Helen catching or not catching her train, with all the subsequent
repercussions thereafter—is
realized in its own separate universe.

Worlds
split when irreversible events occur, such as a choice, or in Helen’s
case, a missed or not-missed train.
(According to Everett, any measurement constitutes a kind of
“choice.”) If we go back in time and change one of those choices,
the result would be a separate universe where everything is identical
up until that crucial decision is made. It’s the act of choosing
that makes one of those options “our” reality, but Everett
insisted that all other options still exist somewhere, in a parallel
universe beyond our ken.

That’s
the key: All these universes never, ever interact in any way; we can
only observe “our” reality. It’s a buzzkill for science fiction
writers, who cheerfully ignore the dictum all the time with
characters confronting their own doppelgangers
in parallel worlds. Sliding
Doors,
in contrast, largely honors this principle, with two minor
exceptions: Helen’s philandering boyfriend Gerry catches a glimpse
of the Helen from the other timeline (in which they have broken up)
in a local pub, while “his” Helen sees visions of her alternate
self in a dream sequence. But technically, no interaction occurs.

It
all sounds just a wee bit crazy, right? Certainly most of Everett’s
contemporary colleagues thought so. His dissertation quickly faded
into obscurity and he left theoretical physics entirely. Indeed, in
1973, when Everett met his future business partner Donald Reisler,
the latter exclaimed, “Oh my god, you’re that Everett, the crazy
one who wrote that insane paper.” He was understandably bitter at
the poor reception his ideas received. When he died in 1982, at the
age of 51, he requested that his ashes be thrown out with the trash.

Many
worlds has its current champions, and Everett’s son filmed a
documentary, Parallel Worlds, Parallel Lives, about his father’s
revolutionary work. The broader notion of a multiverse, while still
controversial, is very much an active field of inquiry in 21st
century theoretical physics. In fact, in 2009, Andre Linde and Vitaly
Vanchurin calculated just how many parallel universe there might be [pdf], concluding it should be around 101016.

So
maybe Everett had the last laugh after all. I like to think that, in
a parallel universe, Hugh Everett III lived to a ripe old age as a
venerated visionary physicist.