Taking the Pulse of the City With Graffiti Artist EKG 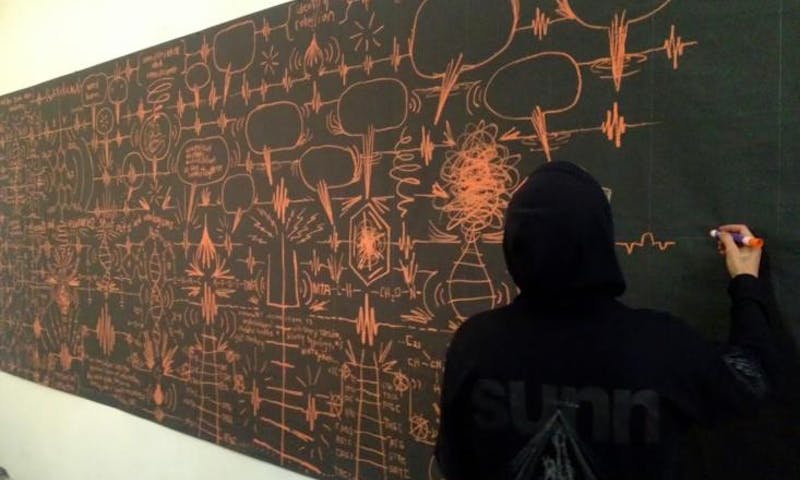 Though New Yorkers are currently chasing down the next piece of Banksy street art, graffiti typically blends into the background. If you’re not a tagger, you most likely are not paying attention to the coded messages embedded in the endless stream of stylized names, faces, animals, and jokes that are constantly thrown up then torn down, sometimes in the very same day.

One street artist, however, has recently caught the attention of gallery curators and bloggers. His unique emblem: a short, bright orange electrocardiogram pulse running across walls, trucks, and mailboxes throughout the five boroughs, and on to other cities around the world.

EKG, as he is known, has had two gallery shows in the past six months. The latest, at Pandemic gallery in Brooklyn, featured a huge opening party and a large array of his distinctive scientific scrawl.

Because graffiti is illegal, EKG remains anonymous. In the following, he explains through email exchanges, what is behind his signature, and what he seeks in scientific symbols.

Note: While EKG would have preferred this interview to contain no capitalization, to suggest overall humility and as a literary nod to poet ee cummings, common capitalization and minor editing was included for readability.

Can you explain a little about how the EKG pulse came to be your tag?

Since fall, 2003, I’ve been working with primitively hand-drawn symbols on the streets. The EKG signal icon appeared in my work as a regular motif sometime during 2008. When I play around with new symbols, they may stick around for a while and then disappear due to lack of relevance to my work, but when I started to access the pulse shape for inclusion it seemed to mesh right away and become an integral element in my work for a few reasons.

The attraction to the signal came out of my readings in semiotics and graffiti, which basically boils down to the idea that graffiti is a public visual communication system instigating connection, community, and cultural change.

I see this tag nearly every day. It must be very meaningful for you to draw it all over New York City. What does the symbol mean to you?

At first the pulse shape represented mainly a transmission signal, a metaphor for illegal aesthetic manifestations in all forms, from political statements to schizophrenic rants, from graffiti to street art, and everything else in between… As it passes through the ethereal circuitry, the transmission becomes imbued with an anti–status-quo aura, a transgressive essence, because of its dissemination by illegal action. I was attracted to the shape of a signal as a metaphor for this means of broadcast, a method of visual public communication between individuals spreading the word and building alternative community.

Over the years, though, the signal accrued other meanings, like any poetic sign hopefully developing depth and plurality, until the shape becomes tumescent with many meanings and possible readings, or maybe one grand unification theory, a universal statement on the nature of humanity, language, and illegal public marks: transmission, emanation, radiation, resonance, fluctuation, palpitation, ripple, wave, blurt, blip. Everything from string theory to graffiti can be tied together in this symbol.

I first “found” you when I posted your tag on Instagram and saw countless others had done the same. Has social media affected your work?

An interesting addition to this roster of vocabulary appeared when I started to place the symbol on the streets. When it was photographed and posted on the Internet, a friend of mine hashtagged it “ekg.” At first I contemplated writing and asking her to change it to “signal,” “pulse,” or something else. But, after thinking about it for a day or two, I realized that if it were defined as EKG it literally would give the symbol heart. The sign would be human and alive, pulsing across the city as one connected electrocardiographic, a pulsing transmission line, the heartbeat of the city. It could reach out not only into the theoretical and the abstract but also connect with the biological and the sociological frequencies of the viewers as well.

At the Pandemic opening, I was somewhat surprised to see much more than just the EKG line. What is your motivation for using so much scientific symbolism?

I am grasping at a grand unified theory of all symbolic systems to discover and express universal truths. From a Pandora’s box of research and relics, I attempt to make connections between symbolic systems of different disciplines.

As a younger artist, I made attempts to go to the darkest places for inspiration. … At a certain point, though, when I was dealing with a bad depression, I decided to try to expel all the negativity, violence, sex, and profanity from my work. While researching new motifs and subject matter, I found science to be the most rewarding and uplifting.

When I look into space through a telescope, in a planetarium, in a big coffee table photo book, I feel a sense of grandeur, wonder, infinity. Like standing on the top of a skyscraper, coming up to a wide plain, or looking out over a mountain range, the sensation is expansive, enlightening, glorious. Reading texts about the universe, scientific discoveries, space flight, or equations, feels expansive and inspiring, causing shivers and “light bulbs.”

What have been some of your scientific influences?

I’ve read popular science books like Brian Greene’s Beautiful Universe, David Foster Wallace’s Infinity and More, a few of the Stephen Hawking books. I skim magazines like Scientific American, Discover, and so on in the library or on newsstands. I don’t watch science much on television. Every once in a while I try watching Nova, but it always seems to be about animals so I’m not interested. I like the cold and theoretical stuff. My heart can’t take it when the alligator eats the fawn; I would rather read about the functions of chemical communications in mammals.

[Chuck] Lorre’s Big Bang Theory is his brilliant golden crown in a long unique career as a writer and producer of sitcoms.

On the flip side, which artists inspire you?

Probably the biggest connection I felt through my work as it was developing was to the graphic simplicity, but deep content, of Keith Haring. For the past 10 years I have only told a few people about that influence because I was worried that it was so glaringly obvious that it would be interpreted as plagiarism. This concern challenged me to avoid any symbol he had already used, which was disappointing because he used the spinning atom a lot! No one ever picked up on it, though, and because at this point I feel I’ve corralled my own unique vocabulary of signs, systems, and content, I’m no longer afraid to mention him. As a matter of fact, it feels good to be able to celebrate his genius.

He has a worldwide popularity that stems from the warmth and accessibility of his icons, but he was also brilliant at creating multilayered and mystifying compositions. The icons and their combinations could imply many possible meanings, creating thought-provoking yet not obvious relationships, choosing signs and combining them in ways that sparked a sense of deep meaning or the impression of an important statement.

Because of his chalky line, I went to Scrapyard [a graffiti and art supply store in Manhattan] late one night 10 years ago to see what I could find that would make a similar mark to his, but be more permanent like a marker. I bought my first orange Sakura oil stick that night and walked through SoHo tagging in a light rain using my umbrella to block my spots. It was a magic night.

Since this issue of Nautilus is about secrets and codes, what kind of codes are you hoping people pick up on when passing by your work?

From DNA to the legal system to cultural mores, codes surround us. Philosophers and scientists translate these hidden secrets of the universe from instinctual awareness to consciousness. Understanding and recognition are all sparks and shivers on a biological level, a release of instinct as it makes itself manifest in the codes of language and thought.

Graffiti and street art are just a couple of categories of illegal aesthetic manifestations that appear on the streets, and yet we are all broadcasting on the same anti-status quo channel, the voice of the people, the pulse of the populace, the heartbeat of the city, inherently anarchistic and individualistic, challenging the system with every smudge, every groan, grumbling, and complaining, taking the spotlight away from the rich and powerful, putting our art where we want to for us to look at, demonstrating for others that the little guy can also become semiotically as powerful as a corporation or country, with the will of a revolutionary guerilla, the speed of a bootlegger, and the agility of a superhero. Thousands of Davids flinging pebbles at goliath eventually bury the giant in a tomb of stone.

And then tag that too. Just because.