The Argument Against Terraforming Mars

We have ethical and aesthetic reasons to leave Mars alone. 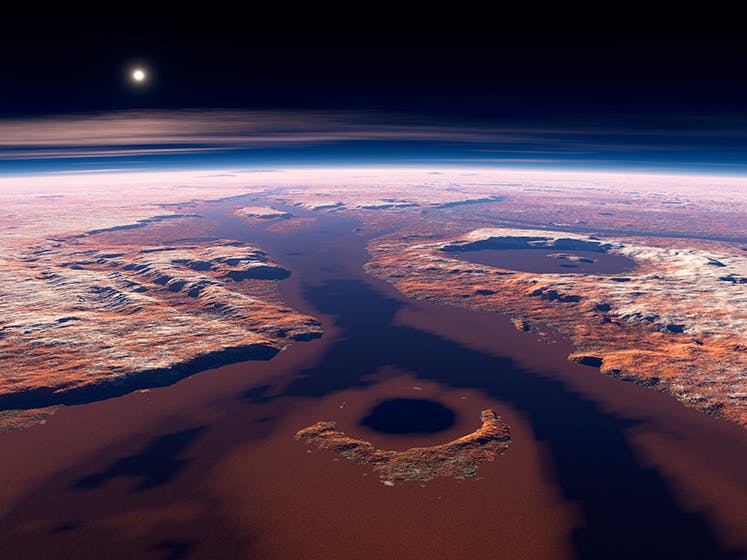 In Kim Stanley Robinson’s science-fiction Mars Trilogy, human colonists “terraform” Mars, turning the rocky red planet into a lush green world. The colonists melt the polar ice caps with nuclear explosives, inducing a greenhouse effect that warms the planet. They then seed the landscape with genetically modified bacteria and plants to render the newly created atmosphere breathable. By the end of this process, their descendants are able to walk and live on the surface of Mars without space suits.

Today many scientists believe that terraforming Mars is theoretically possible with continuing improvements in technology and the dedication of enough time and resources. Elon Musk recently claimed that SpaceX plans to start colonizing Mars in 2022, although he says the colonists will need to decide whether to terraform the planet. But just because we could do something doesn’t mean we should. We must first ask: Is there anything wrong with humanity reshaping Mars for its own ends?

The argument against terraforming is easier to make if we imagine there to be life on Mars, even bacterial life. The intrinsic value of these species would give us some reason to refrain from terraforming. The more interesting philosophical question is whether there are any reasons to resist terraforming if it turns out that Mars is lifeless. If so, this has further implications for the ethics of asteroid mining and space exploration.

One of the oldest ethical traditions, virtue ethics, can teach us something about this very modern topic. Many popular approaches to ethics focus on actions or intentions, while considerations of a person’s character are secondary at best. But virtue ethics, most famously developed by Aristotle, starts with the observation that we are often more confident in our judgements about who is a good person than we are about what the right thing to do is in a particular situation. If we wish to become a good person, then we should strive to be like those people we admire. According to virtue ethics, what makes someone a good person is that they possess various virtues, such as kindness, courage, and wisdom. What makes someone a bad person is that they possess various vices, such as cruelty, cowardliness, and naivety.

Is there anything wrong with humanity reshaping Mars?

Virtues and vices are features of a person’s character and consist in a history, or pattern, of actions and feelings. A single kind act does not make a cruel person kind, nor does a single cruel act render a kind person cruel. According to Aristotle, to lead a distinctively human life—a life of human flourishing—is to develop and exercise the virtues.

And so, when it comes to the ethics of actions, such as the decision to terraform Mars, we should ask: What sort of person would do that—a virtuous or vicious one?

Enthusiasts often advertise space exploration as an opportunity to be virtuous. “To boldly go”—as they say in Star Trek—is valuable mostly because courage is a virtue. But one can’t have the opportunity to develop virtues without the possibility of demonstrating vices, and terraforming Mars would exhibit two major vicious character traits.

One is insensitivity to beauty. Mars has many features of extraordinary natural beauty. It’s is home to the tallest known volcano on any planet, Olympus Mons, whose cap reaches 13.6 miles high—two and a half times the height of Mount Everest. Mars also has arguably the most spectacular canyon system in the solar system, which stretches to about the length of the United States and has troughs 6 to 7 times deeper than the Grand Canyon. The Martian landscape is a system in flux, sculpted by wind and other complex atmospheric and geophysical cycles. Because terraforming would return liquid water to Mars it would radically transform the landscape, destroying its distinctive beauty.

A failure to respond appropriately to beauty is a vice because it makes living a characteristically human life impossible. One thing that distinguishes us from mere brutes is our appreciation of beauty. A person who can wander through the Grand Canyon without being appropriately moved by its beauty is missing something in their make up as well as in the world. Such a person will also struggle to realize characteristically human goods like the development of skills, such as artistic and musical skills, and relationships, such as love, that are premised on the recognition of aesthetic qualities. Only someone insensitive to beauty would not recognize the destruction of the Martian landscape as a tragedy.

The decision to terraform Mars would also exhibit hubris. Often understood as an “excessive pride before the gods,” hubris has ancient roots and is perhaps best epitomized by the fabled Icarus, whose wings of wax and feathers melted when he got too close to the sun in his attempt to reach heaven. But you don’t need to believe in the gods to grasp the significance of hubris: Overweening pride and profound arrogance are the hallmarks of this vice.

Sometimes hubris is self-evident in the pronouncements of enthusiasts for terraforming, when they exult in a possible future where humans have god-like powers and can transform entire planets. The scale of the project and the potential for catastrophic failure also suggest the action is motivated by hubris. As the story of Icarus suggests, we may discern limits on the proper extent of our aspirations by asking how far we would fall if we failed.

Another reason for believing that terraforming would involve hubris is to consider how we treat Earth, a place we might call our “proper place” or “home.” If we think of our home as a place which nurtures us and in which we grow to maturity, then a case could be made that until we learn to treat our own planet better, any attempt to reshape another planet and call it our “home” would be hubristic.

Nothing I have said here implies that space exploration is necessarily unethical or that we should not try to explore or colonize other worlds. Rather, these virtue-ethical arguments suggest that the spirit in which we go about these activities matters for their ethics. Each time we venture out into space we should look within—or, perhaps better, at each other—and consider what our involvement in the particular project reveals about us. If we proceed in awareness of the beauty and complexity of the systems we explore, if we are conscious of the limits of our own powers, and are moderate in our ambitions, then these activities may contribute to our flourishing.

But if we proceed recklessly, glorying in our own power, and without concern for the beauty and integrity of the worlds we aim to conquer, our activities are unethical because of what they reveal about our character. Because our character is a function of how we’ve behaved in the past, the way we treat our own planet is relevant to the ethics of our exploration of others. Before we set out to induce a greenhouse effect on Mars, we should do something about the one we have created here on Earth.