The Hidden Science and Tech of the Byzantine Empire

Byzantine civilization, the eastern Roman empire whose capital was at Constantinople, is mostly known today for its spirituality and eccentricities, including the spectacular church of Hagia Sophia (a feat of Roman engineering), glittering mosaics, sombre but colorful icons, ambitious bishops, bizarre holy men, intriguing eunuchs, and the massive amounts of gold that its emperors had at their disposal before western Crusaders and then the Turks destroyed the empire in 1453 A.D. This romantic image has long catered to western audiences and markets alongside the pejorative (and unfair) usage of “Byzantine,” for unnecessarily complicated systems that work through intrigue, evasion of responsibility, obfuscation, and backstabbing.

Philoponos rarely receives credit for this breakthrough, made over one thousand years before Galileo.

In reality, Byzantium was also a pragmatic and down-to-earth culture—it developed sophisticated systems for taxation, justice, administration, and military deployment—and it also exhibited prowess in science and technology. My new book, A Cabinet of Byzantine Curiosities: Strange Tales and Surprising Facts from History’s Most Orthodox Empire, aims to capture this side of the Byzantines, too. Byzantine military inventors perfected Greek Fire, a combustible liquid like napalm that could be hurled at enemy ships (or lobbed against land armies as hand grenades); a Byzantine philosopher made two synchronized clocks, placing one at the frontier and one in the capital, so that messages could be sent across Asia Minor via a network of fire signals, each message keyed to the time of day or night that it was sent; and Byzantine theologians included ancient Greek science within the basic curriculum of learning that aspiring religious thinkers had to master.

The selections below highlight six notable successes (and failures) of Byzantine science and engineering. The italic text is from Byzantine thinkers and writers themselves.

Galileo is credited with refuting Aristotle’s theory of falling bodies. Aristotle thought that heavier bodies fall faster, in proportion to their weight (On the Heavens 1.6). But, as Galileo knew, skepticism about this theory had been expressed by Ioannes Philoponos, a teacher, Christian theologian, and philosopher in Alexandria (ca. 530). Philoponos denied that the speed of motion was proportional to the weight of the bodies. This, he wrote, is a complete error, as we can see through observation better than through any abstract proof. If you drop two bodies of vastly different weight from the same height, you will see that the difference in the time that it takes for them to fall is not at all proportional to their difference in weight; it is, in fact, a small difference (Commentary on Aristotle’s Physics v. 17, p. 683). Philoponos rarely receives credit for this breakthrough, made over one thousand years before Galileo.

Symeon Seth (11th century) gives a number of proofs that the earth is a sphere. First, the sun dawns in the east before it sets in the west, so when it is afternoon among the Persians, it is morning among us. But how do we know that there are time differences? We know it from eclipses of the sun and moon: the same eclipse is recorded as taking place in the afternoon by the Persians but in the morning by us. Second, we see mountaintops appear first on the horizon when we are sailing at sea, just as we see the top of the mast of a ship first that is sailing toward us. Third, were the earth not spherical, all the stars in the night sky would be visible from everywhere at the same time, but there are some seen in the north that are not seen in the south, and vice versa (Summary of Physics 1.5).

3. Where to Store the Water

Imported water was stored in hundreds of cisterns, some of which were vast. The open-air Aetius cistern measured 244 by 85 by 13–15 meters, and is used as a soccer stadium today. The covered cistern of Philoxenos was supported by 224 double columns and had a capacity of 40,000 m3. Its Turkish name is Binbirdirek (“Thousand and One Columns”), and today it hosts wedding receptions. The largest covered cistern is the Basilica Cistern, across the street from Hagia Sophia, which can hold 80,000 m3 (its dimensions are 138 by 65 meters, with 336 columns). It was used as a set in the 1963 James Bond film From Russia with Love.

The Byzantines stuck to the Greek numerical system, which represented numbers using various combinations of letters in the Greek alphabet. The scholar Maximos Planoudes (d. ca. 1305) wrote a treatise on what we call Arabic numerals, explaining how to use them in arithmetic and calling them “Indian” (which is technically correct). Here is how he introduced the system: Given that numbers are infinite, but we cannot have infinite numbers, the more philosophical astronomers invented signs and a method for using them so that they could precisely write the numbers they needed in a concise way. There are only nine of these signs: 1 2 3 4 5 6 7 8 9. They also postulate another sign that they call the cipher, which according to the Indians means “nothing.” All nine signs are Indian in origin; the cipher is written as 0 (Planoudes, The Great Method of Calculation according to the Indians 1).

Nikephoros Gregoras (1295–1361) was one of Byzantium’s best astronomers, and spent years under house arrest for opposing the prevailing theology. In 1329, he wrote a letter to a colleague, Georgios Pepagomenos, predicting three eclipses that would happen during the upcoming year, one solar and two lunar. He predicted the year, date, time of day or night, and extent of eclipse (Gregoras, Letter 40).

An attempt to build wings and glide on the air is recorded for 1162. An Arab resident of Constantinople announced that he would fly off the tower that stood over the starting gates of the hippodrome. At first he seemed to be a charlatan, but when the people saw him, they realized that he was an inventor. He stood at the top of the tower, wearing a long, wide, white robe. It was twisted around many withes in a wide circle so that it contained many folds. His plan was to unfurl it like a sail and catch the wind. Every eye was turned on him and the crowd chanted “Jump! Jump! How long will you keep us waiting in suspense?” The emperor sent a man to dissuade him, to no avail. The man tested the wind many times by raising his arms and flapping them like wings. When he judged the moment was right, he leaped off the tower like a bird, but dropped to the earth like a dead weight, shattering all the bones in his body and giving up the ghost (Choniates, History 119–120). A similar attempt was made at the Eiffel Tower in 1912, with the same result. It was caught on film, viewable online.

Anthony Kaldellis is Professor of Classics at Ohio State University and the author, among others, of The Christian Parthenon: Classicism and Pilgrimage in Byzantine Athens. 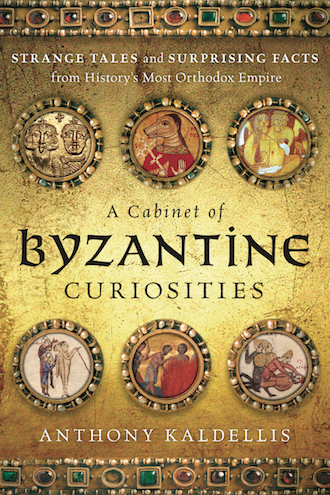 Adapted from A Cabinet of Byzantine Curiosities: Strange Tales and Surprising Facts from History’s Most Orthodox Empire Copyright © 2017 by Anthony Kaldellis. Published by Oxford University Press.