Rags, riches, and fame in mathematics. 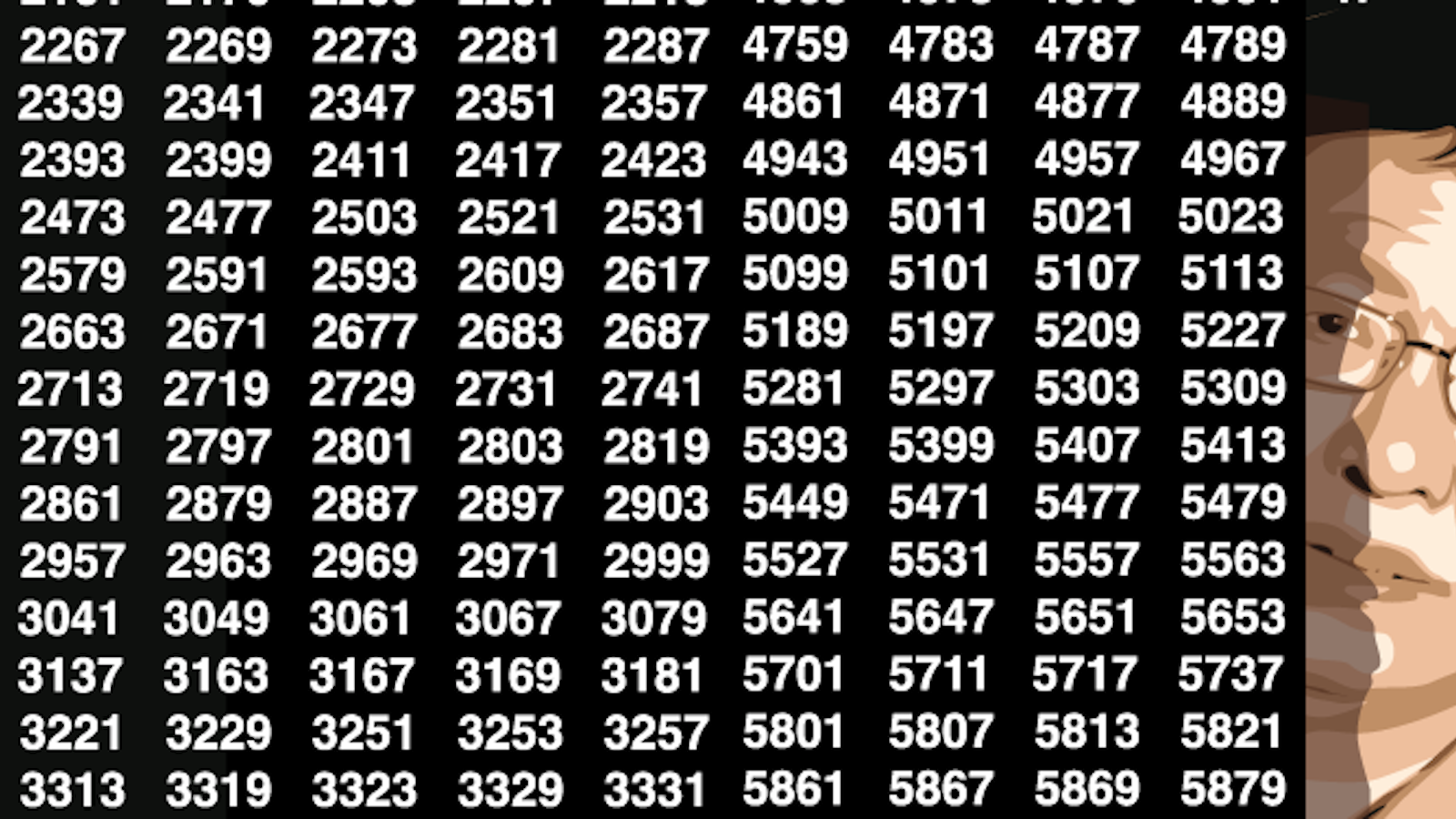 Yitang “Tom” Zhang spent the seven years following the completion of his Ph.D. in mathematics floating between Kentucky and Queens, working for a chain of Subway restaurants, and doing odd accounting work. Now he is on a lecture tour that includes stops at Harvard, Columbia, Caltech, and Princeton, is fielding multiple professorship offers, and spends two hours a day dealing with the press. That’s because, in April, Zhang proved a theorem that had eluded mathematicians for a century or more. When we called Zhang to see what he thought of being thrust into the spotlight, we found a shy, modest man, genuinely disinterested in all the fuss.

Mathematicians don’t tend to get famous. That’s probably because it’s hard for the public to grasp what they do. The importance of the light bulb, penicillin, or DNA is easy to understand, and Edison, Fleming, and Crick are household names. The likes of Euler, Riemann, or Dirichlet seem, by comparison, outside of mainstream awareness.

But mathematicians also star in some of the most dramatic stories in science. The lone, unrecognized genius laboring away on a groundbreaking theory over many years is more fiction than fact for most of modern science—but not in mathematics. Andrew Wiles’ 1995 proof of Fermat’s last theorem, which had defied all efforts to prove it for more than 300 years, was made all the more dramatic by the secrecy with which it was conducted. But Wiles was already ensconced in the elite circles of mathematics when he did his work.

Not only did Zhang work in relative secrecy, he was also a complete unknown. He had found work as a lecturer at the University of New Hampshire (UNH) in 1999, eight years after he finished his Ph.D., with the help of connections at his undergraduate institution, Peking University. Then, in April of this year, Zhang announced a proof that cracked open a century-old problem in mathematics, called the twin prime conjecture. “It was like climbing Everest,” says Ayalur Krishnan, a math professor at CUNY’s Kingsborough community college.

The importance of the light bulb, penicillin, or DNA is easy to understand, and Edison, Fleming, and Crick are household names.

Zhang’s success followed from the construction of a new kind of prime-number filter. Previous work had used a strong filter, or sieve, which discarded prime numbers that were too far apart from each other. It allowed mathematicians to prove that there were always neighboring pairs of prime numbers closer together than some moving average. But they couldn’t prove these pairs were separated by some constant finite difference. By making the sieve less selective, Zhang was able to reach the finite bound proof, representing the most significant progress to be made on the centuries-old twin prime conjecture.

The result was a thunder strike for the pure mathematics community. Zhang submitted his work to the Annals of Mathematics, one of the most prestigious math journals in the world, with a typical review time for a new paper of one or two years. Zhang’s paper was accepted in three weeks. Soon the fame machine was in full gear. Students stopped Zhang on the UNH campus to ask for his autograph. “I had not expected it would cause such a big sensation,” Zhang commented at a conference. “I saw myself appearing in newspapers and magazines from India to Europe to Brazil.” The twin prime conjecture began to be the unlikely subject of mainstream news stories, with 100 news headlines on the topic in May alone, according to Google Trends.

He is simultaneously driven and calm, with an ambition centered around a love of math.

Zhang’s work also set off a flurry of follow-up activity in the mathematics community, including a collaboration of a dozen or so mathematicians called the Polymath8 project, which is attempting to reduce the maximum separation between primes in Zhang’s proof to something less than 70 million. As of late August, it had provisionally lowered it to 4,680. Terence Tao, a math professor at UCLA and a member of the collaboration, described Zhang’s work as a technical breakthrough that should lead to more progress on other questions in analytic number theory, including the Goldbach conjecture, which states that every even number is the sum of two primes.

Erica Klarreich, a Berkeley-based science writer who has a Ph.D. in mathematics and has written about Zhang, says his proof demonstrates the remarkable balance between order and randomness within the prime numbers. “Prime numbers are anything but random—they are completely determined,” Klarreich says. “Nevertheless, they seem to behave in many respects like randomly-sprinkled numbers that eventually display all possible clumps and clusters. Zhang’s work helps to put this conjectured picture of the primes on a solid footing. ”

Speaking from his office in New Hampshire, the soft-spoken Zhang replied to most questions with a quiet chuckle followed by a clipped sentence. He is simultaneously driven and calm, with an ambition centered around a love of math. The most repeated phrase in our conversation was, “I am a peaceful man.”

When did you become interested in the twin prime conjecture?

That was when I was a child. That is a famous problem. And easy to understand for many educated people. I am interested in primes. Prime numbers are one of the biggest challenges to the intelligence of human beings.

Why is the twin prime problem famous?

First, the conjecture has been known for a long time—at least 100 or maybe 200 years, maybe longer. Second, the statement is very simple. It is easy to understand for many people. Third, the problem is believed to be very important.

What stopped you from finding work after your Ph.D?

During that period it was difficult to find a job in academics. That was a job market problem. Also, my advisor did not write me letters of recommendation. So I went to my friend’s house in Kentucky. He was running some Subway restaurants. I was an assistant in his business for several years.

When you were working in Kentucky and Queens, did you think you’d ever work in mathematics again?

I believed so. I was waiting for the chance. I kept thinking about math during that time, every week.

When did you first try to solve the twin prime problem?

Around four years ago. I tried because at that time, in this field it was very hard, because some other professors, like Goldston and Pintz and Yildirim, they made significant progress towards this problem. And at that time many people believed it would not be possible to solve it. And many people tried. And eventually I am successful. This is what I can say.

Why did you solve this problem and not somebody else?

I think the important reason is that I persisted for several years. I didn’t give up.

How long did you work on your conjecture?

I worked on my conjecture for four years. I worked on it seven days a week. I didn’t take any breaks almost. If we count the time I spent thinking about the problem, then it was more than 10 hours a day. If you count sitting in front of a desk or using a computer, then it was five or six hours a day. I was also teaching two classes per semester at the time.

Did you show your work to your colleagues?

No, I didn’t. Even in the circle of my friends, although they are also mathematicians, they do not understand this problem very well. So I just mentioned I was working on it, but I didn’t show my work to anybody. I don’t like to tell so much to other people before I get to the result. I am a shy person.

Andrew Wiles also told almost nobody about his work on Fermat’s Last Theorem.

If he had told the public about his research, he wouldn’t have been concentrating on the problem. That might have happened to me. Sometimes it’s important to be alone, so you can concentrate on what you’re doing. If there are too many social obligations, that bothers me so much.

Did you experience any emotions when you realized you’d solved the problem?

Not so much. I am a very quiet person.

A little. Not too much.

How has your wife reacted?

Before I published this paper, she had no idea about it. Now of course she’s happy. Still both of us are very peaceful. We are not too excited.

You must have gotten tired during your work. How did you rest?

I like listening to music and reading novels or fiction. That’s my way. I don’t like to watch TV. I listen to classical music only—all of the famous composers, Beethoven, Chopin, Brahms, Tchaikovsky, Mozart, all of them. I also like walking. New Hampshire is a very good place to walk. Sometimes I get good ideas when I walk. There are small forests, creeks everywhere.

Is the most likely application of this result in cryptography?

Yes, this should be true.

How do pure mathematicians choose which problem to work on?

That depends. The different subjects have different choices. Geometry develops very quickly. There are many new problems every year or every 10 years. But in number theory there are lots of older problems that exist for 100 or 200 years. Many of these problems are very easy to understand but very difficult to solve. They are more famous because they are easy to understand. Many people understand these problems, not just mathematicians.

Are there problems that deserve to be famous but are not famous because they’re hard to understand?

Would you describe yourself as famous now?

Are you comfortable speaking in public?

You’ve said you don’t care about the money and honor. Why not?

Because of my personality. I am a quiet person. I like to concentrate on the math, on what I like. I do not care about the life conditions, like a good house, good cars, good clothing. This is my personality. I don’t have a car right now. I have a townhouse, but it is in California, where my wife lives. In New Hampshire I rent an apartment. The most important thing is to concentrate on math itself.

What do you think of Grigori Perelman, who turned down the Fields Medal?

Would you accept a medal?

What would you do with the money?

Maybe the best way would be to give the money to my wife. Let her deal with this issue.

Do you ever think of the time that you worked in Subway?

Sometimes I think about it. I just think of it in a very peaceful way. It is past, so I don’t worry about that. Disappointment—that was the past.

Did you have any scientific heroes?

Maybe Gauss. When I was 10, I learned his name. He helped to inspire me to study mathematics.

Do you expect yourself to be an inspiration for students?

Yes, particularly in China. When I came to China I was treated like a hero. They took me to dinner, provided good housing, gave me personal gifts and concert tickets.

I am working on a problem related to the Goldbach conjecture.

Is your current research being slowed down by all the interviews?

Why do you do them?

I couldn’t avoid them completely. Say your friends ask you—that’s a problem. But I try to reduce the quantity as much as possible.

What would you say to a young student who wants to solve a problem?

Keep going. Do not easily give up.

Where do you suggest they find the motivation?

The most important motivation is to really love mathematics.

This article originally ran in our “Fame” issue in September, 2013.