There May Be Two Trillion Other Galaxies 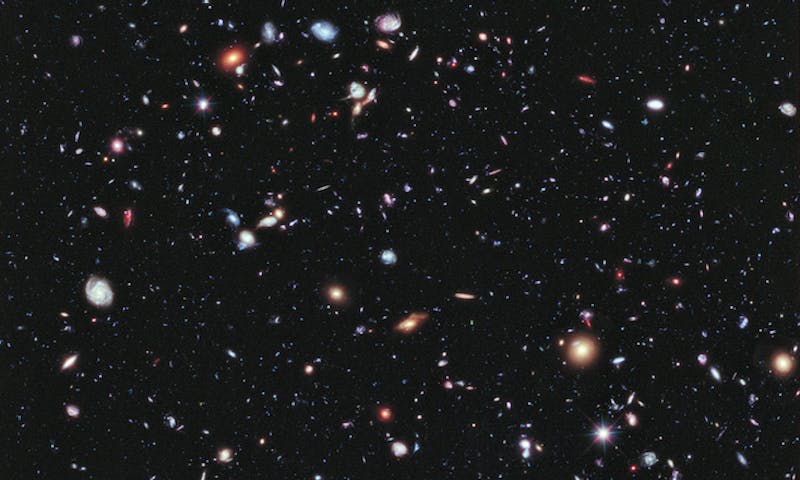 In 1939, the year Edwin Hubble won the Benjamin Franklin award for his studies of “extra-galactic nebulae,” he paid a visit to an ailing friend. Depressed and interred at Las Encinas Hospital, a mental health facility, the friend, an actor and playwright named John Emerson, asked Hubble what—spiritually, cosmically—he believed in. In Edwin Hubble: Mariner of the Nebulae, Gale E. Christianson writes that Hubble, a Christian-turned-agnostic, “pulled no punches” in his reply. “The whole thing is so much bigger than I am,” he told Emerson, “and I can’t understand it, so I just trust myself to it, and forget about it.”

Even though he was moved by a sense of the universe’s immensity, it’s arresting to recall how small Hubble thought the cosmos was at the time. “The picture suggested by the reconnaissance,” he wrote in his 1937 book, The Observational Approach to Cosmology, “is a sphere, centred on the observer, about 1,000 million light-years in diameter, throughout which are scattered about 100 million nebulae,” or galaxies. “A suitable model,” he went on, “would be furnished by tennis balls, 50 feet apart, scattered through a sphere 5 miles in diameter.” From the instrument later named after him, the Hubble Space Telescope, launched in 1990, we learned from a series of pictures taken, starting five years later, just how unsuitable that model was.

“The image may not appear, it may cause your Web browser to lock up, or it may crash your computer.”

The first is called the Hubble Deep Field, arguably “the most important image ever taken” according to this YouTube video. (I recommend watching it.) The Hubble gazed, for ten days, at an apparently empty spot in the sky, one about the size of a pinhead held up at arm’s length—a fragment one 24-millionth of the whole sky. The resulting picture had 3,000 objects, almost all of them galaxies in various stages of development, and many of them as far away as 12 billion light-years. Robert Williams, the former director of the Space Telescope Science Institute, wrote in the New York Times, “The image is really a core sample of the universe.” Next came the Ultra Deep Field, in 2003 (after a three-month exposure with a new camera, the Hubble image came back with 10,000 galaxies), then the eXtreme Deep Field, in 2012, a refined version of the Ultra that reveals galaxies that formed just 450 million years after the Big Bang. (The image’s resolution is epic. From Hubblesite.org: “Even though the file sizes may be small, the number of pixels these images contain can be problematic for your browser. The image may not appear, it may cause your Web browser to lock up, or it may crash your computer.”)

From these series of images, scientists estimated that the observable universe contained 100-200 billion galaxies, at least 1,000 times more than Hubble estimated in Observational Approach to Cosmology. He certainly anticipated the correction: His model, he wrote, “will serve as a reasonable working hypothesis until it leads to contradictions. Then it can be revised or replaced to conform with our new information.”

Yesterday, word came that even the 100-200 billion figure would have to be revised. Christopher Conselice, an astrophysicist at the University of Nottingham, in the United Kingdom, and a team of international colleagues, found that, after poring through deep space images from Hubble and other telescopes, and converting them into a three-dimensional model, there had to be at least ten times more galaxies than thought—so, at least a trillion. This figure, he and his colleagues write in their paper, “divulges information about the mass density of the universe, background light at various wavelengths, as well as insights into Olbers’ Paradox.”

Olbers’ paradox, also called the “dark night sky paradox,” asks why the night sky is dark, since the universe is (supposedly) eternal and filled with (supposedly) infinite sources of light. In their paper, the authors concluded that, with at least a trillion galaxies, every point in the sky contains part of a galaxy. But here’s how the paradox is resolved, the researchers say: The galaxies’ light remains invisible to us and our telescopes since one, the universe is not static, as the original formulation of the paradox supposed—it’s instead expanding faster and faster, so that some light heading for us has red-shifted beyond visibility; two, the universe isn’t eternal and infinite in size; and three, some light gets absorbed by interstellar dust.

“If we want to observe all the galaxies in the universe, even with imaging, it will require extensive telescope programmes that are likely several generations away,” the researchers say. This was a problem Hubble faced, too. “When we consider regions beyond the limits of our telescopes,” he wrote, “we can only extend these simple features”—what he had been calling “the uniform distribution of nebulae”—“on and on, indefinitely.”