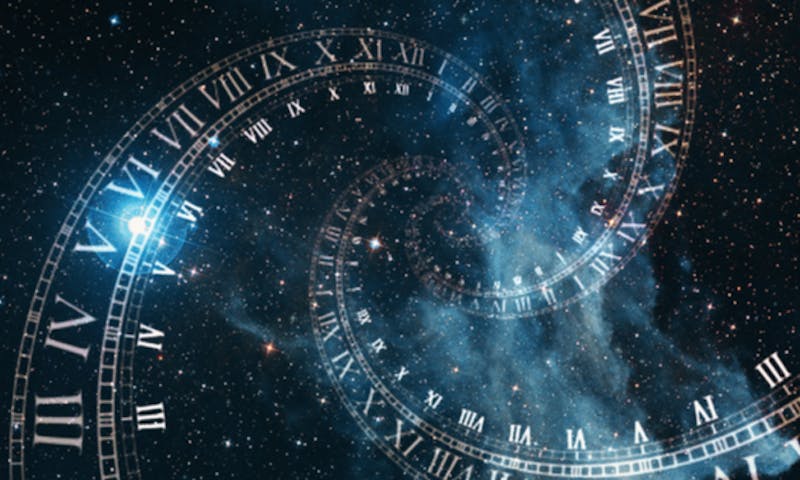 Time travel has been a beloved science-fiction idea at least since H.G. Wells wrote The Time Machine in 1895. The concept continues to fascinate and fictional approaches keep coming, prodding us to wonder whether time travel is physically possible and, for that matter, makes logical sense in the face of its inscrutable paradoxes. Remarkably, last year saw both a science-fiction film that illuminates these questions, and a real scientific result, spelled out in the journal, Classical and Quantum Gravity,1 that may point to answers.

The film is writer-director Christopher Nolan’s attention-getting Tenet. Like other time travel stories, Tenet uses a time machine. But unlike the other stories, Tenet proposes a novel mechanism for this “Turnstile” machine to send a person or thing backward into its own history. The mechanism is reversed entropy, which carries real meaning because entropy says something about the flow of time through the Second Law of Thermodynamics.

This 19th-century physical law recognizes that in a system that uses energy, such as a steam or gasoline engine, some energy is lost forever as frictional processes turn it into heat. Entropy is the mathematical quantity that measures this loss, and it always grows as a system operates. Entropy is “time’s arrow” because its direction of increase must point to the future. Building on this understanding of increasing entropy, Tenet asserts that decreasing entropy must produce travel into the past.

With this premise, the film shows two operatives in an organization called Tenet, Protagonist (John David Washington) and Neil (Robert Pattison), fighting to avert the destruction of the world. Their enemy is Russian oligarch Sator (Kenneth Branagh) in league with hostile forces from the future who attack today’s world with “inverted” objects and people. As Protagonist and Neil investigate, they experience events such as bullets that fly back into the barrels of guns, and a fight between the forward-traveling Protagonist and his own time-reversed self. In the final scenes, the two agents use forward and backward time to disable destructive devices implanted by Sator, saving the Earth. The action film is filled with scenes and plot points that hold a viewer’s interest with their intricate forward and backward elements and chronology.

The critical result is general relativity theoretically allows travel into the past.

Tenet gets points for its creative use of entropy but this bit of 19th-century science is not convincing. Though increasing entropy does indeed track the forward flow of time, there is no evidence that entropy controls time. In fact, entropy decreases locally in our own bodies, yet we move forward in time, not backward. That may explain why, when Nolan consulted Caltech theoretical physicist Kip Thorne—who had worked on Nolan’s earlier film Interstellar (2014)— Nolan had to promise, “I wasn’t going to bandy his name around as if there was some kind of scientific reality to Tenet. It’s a very different kettle of fish to Interstellar.”2

In any case, the irony of Tenet is it makes us consider that time travel would violate our understanding of how the universe works. Scientists and philosophers believe, for instance, that cause always precedes effect. Time travel would disrupt this, as shown by the “grandfather paradox” invented by French science-fiction writer René Barjavel in his novel Le Voyageur Imprudent (1944), published in English as Future Times Three. This clear example of the contradictions in time travel appears in Tenet as Protagonist and Neil consider the repercussions of their battle against the people of the future:

Protagonist: We’re their ancestors. If they destroy us, won’t that destroy them?

Neil: Which brings us to the grandfather paradox … If you went back in time and killed your own grandfather, how could you have been born to commit the act?

In this and other exchanges of ideas, the two agents note that the paradox exists but can only hint at speculative solutions like “parallel worlds” and “multiple realities.” Neil finally shrugs off the whole problem with the statement “What’s happened’s happened,” and the two return to the action. Versions of the grandfather paradox show up as well in other science-fiction stories. In Back to the Future (1985), time-traveler Marty McFly tries to manipulate earlier events involving his parents to ensure that he is after all born in the following timeline. Plot twists like these make great entertainment but do not address the paradox.

Nor does fiction explain exactly how we might voyage through time. In some stories it happens involuntarily via a “time-slip” triggered by a huge uncontrolled energy release. In the film The Final Countdown (1980), a storm at sea carries a modern nuclear-powered U.S. Navy aircraft carrier and its crew back to Dec. 6, 1941, the day before the Pearl Harbor attack; and in Edmond Hamilton’s novel City at World’s End (1951), an atomic bomb blows a whole midwestern city and its people into the far future. H.G. Wells instead made time travel intentional with his time machine, but except for a hint that its operation is linked to human consciousness, we do not know how it works. And although the DeLorean time machine in Back to the Future was a popular favorite, we are not told how it turns speed and energy into time travel.

The finding shows different paths that loop back to the same point in spacetime.

Do any real scientific ideas support time travel? Do they provide a way to resolve its paradoxes? The answers lie in relativity and quantum physics. Einstein’s relativity—especially general relativity, his theory of gravity—treats time directly together with space as the spacetime continuum, the fabric of the universe that has cosmic physical effects. Quantum theory describes subatomic behavior, but is also necessary to explain cosmic processes where general relativity breaks down, as it does inside a black hole, and during the earliest moments of the universe. That is why physicists are working to combine both theories into a unified theory of quantum gravity that is a more complete description of the universe.

In Interstellar, Nolan used general relativity and quantum gravity to justify how people and things might travel through time. In the film, humanity needs to escape an increasingly unlivable Earth, and space explorers seek distant habitable planets by traveling near black holes and through wormholes, the cosmic shortcuts through spacetime that general relativity predicts would shorten voyages between two points in the universe. This produces novel temporal effects that Thorne worked out in detail.

One real result from general relativity is that the flow of time is variable. This is gravitational time dilation, where time flows more slowly the stronger the gravitational field. It appears in a crucial Interstellar scene where spacecraft pilot Cooper (Matthew McConaughey) has aged only by hours in the powerful gravity near a black hole, but realizes that Murph, the young daughter he left back on Earth, has meanwhile aged by decades. He desperately wants to travel back in time to communicate with her at age 10; but this interaction should not carry information from future to past, another of the violations that time travel would create. Thorne finessed the problem by using ideas from quantum gravity that allow Cooper to travel back and communicate with Murph by pushing objects to create gravitational forces that she senses, without violating anything. Thorne also describes another form of time travel in the book he wrote to accompany the film, where a wormhole makes it possible to reach the past.3

Since we do not yet have a complete, experimentally confirmed theory of quantum gravity, these ideas are speculative, not definitive. Physicists are far from agreeing over whether time travel of this sort is possible. Stephen Hawking thought the wormhole time machine would never work—and going further, he stated his “chronology protection conjecture” that the laws of physics must disallow time travel to prevent paradoxes.

But science has produced new ideas about the chances for time travel. In their 2020 paper in Classical and Quantum Gravity, “Reversible dynamics with closed timelike curves and freedom of choice,” physicists Germain Tobar and Fabio Costa showed that according to general relativity, time travel may be possible and less disruptive than previously thought.

Tenet gets points for its creative use of entropy but it’s not convincing.

To understand why, the starting point is to realize that general relativity replaces Newton’s theory of gravitation by showing that matter directly influences spacetime. This in turn determines how things and people move through space and time. For example, instead of gravitationally pulling on a planet as Newton’s theory proposed, a massive sun distorts the surrounding spacetime so the planet’s natural path is an orbit around the sun. This is exactly what we experience: the Earth goes around the sun, and returns to its starting point in space but a year later. What Tobar and Costa noted is that other arrangements of matter generate different paths through spacetime that loop back to the original position, and significantly, also back to the original time. For reasons buried in the history of relativity theory, such paths are called closed timelike curves (CTCs); but the critical result is, general relativity theoretically allows travel into the past.

This still leaves the possibility of creating insoluble paradoxes. Various analyses have shown that these can be avoided by limiting the choices a person could make, which, however, raises the objection that this would stifle free will. The unexpected finding by Tobar and Costa is that under certain broad conditions, not just one but multiple CTCs exist and trace different paths as they loop back to the same point in spacetime. A time traveler who follows any of these CTCs ends up at that same time and place, which, according to the authors, eliminates disruptive paradoxes but allows the traveler to freely choose among different life paths through time.

To be clear, though, none of the theoretical results is yet a blueprint for a time machine. There is a big gap between obtaining valid mathematical results in a theory, and transforming them into a real working device. The obstacles can be enormous; for example, one distribution of matter in general relativity that would produce a CTC such as Tobar and Costa describe is a long rotating cylinder. This does not occur in nature and would have to be built on a cosmic scale beyond human engineering. But knowing that general relativity needs to merge with quantum physics to completely describe the universe, different possibilities could come out of a theory of quantum gravity. Then we would better understand space and time and perhaps finally decide if time travel is a realistic possibility, and if so, how to achieve it.

A full theory of quantum gravity may be a long way off, however, because it is difficult to combine discrete quantum particles and energy packets with the smoothly varying cosmic fabric of spacetime in general relativity. While we wait, writers and filmmakers like Nolan might consider making the next engrossing film after Tenet, where would-be time travelers dare to see where those closed timelike curves take them.