Watch Water Levitate, Flow Up, & Swirl the Wrong Way in the Other Hemisphere 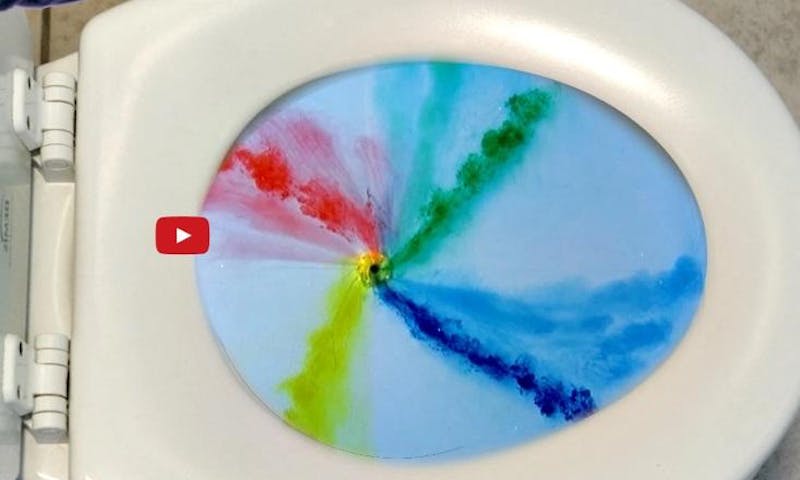 The conventional wisdom is all wrong. Countless parents and teachers have gotten it twisted. The BBC and PBS aired bogus explanations. Even textbooks have botched the story.

The Earth’s rotation, and the Coriolis effect that results, do not cause water to circle the drain in opposite directions in the Northern and Southern Hemispheres.

Well, actually, they do—sometimes. But not in your sink, not by happenstance, and only if you go to great lengths to let Coriolis take over.

You can see two of the very rare occasions when latitude does control how water drains in these twin videos from the YouTube channels Smarter Every Day and Veritasium, which recorded tag-team-style explanation of the phenomenon. Start the two videos as close as you can to the same time, and you get excellent demonstrations from both sides of the Equator.

These may be the best of online watery demonstrations, but there are some other good examples, too. In this video, the backyard experimenter named brusspup sets up a speaker projecting a sine wave around 24 hertz into a hose squirting out water. With the camera set to capture 24 frames per second, the water appears to barely move at all, a great demonstration of the stroboscopic effect, the same thing that makes car wheels look like they’re going the wrong way on TV. With the sound at 25 hertz, the water looks to be going in slow motion, clashing surreally with the regular-speed audio and camera movement. At 23 hertz—well, you can probably figure it out.

That collision of sound and video was perplexing enough that it threw off many of the commenters. Some of them concluded that the strange apparent motion of the water was due to a resonance effect of the vibrations on the water. That is a real and pretty phenomenon demonstrated in other videos, like this one:

Some of the other impressive water demonstrations are more in the line of magic tricks. British experimental psychologist Richard Wiseman and comedian and TV presenter Stephen Fry fooled viewers by covertly using plastic lids to make water appear to defy gravity and stick inside of inverted cups.

YouTuber Daniel DeEntremont angered an appreciable portion of the site’s users with a water-based video he uploaded. In his trick he one-ups Wiseman and Fry by putting the inverted cup of water on a table and taking the cup away, leaving the water behind in the shape of the cup. For added verisimilitude, he says the trick is hard even for him to pull off, including several “outtakes” of him messing the trick up and spilling the water all over his table.

But perhaps the best special effect of all is freeing water from its gravitational bonds and watching its strange, unfamiliar behavior. It’s easy to make a cool video of water when you’re in space.