What Do Romantic Aliens See at the End of Their Alien Days? 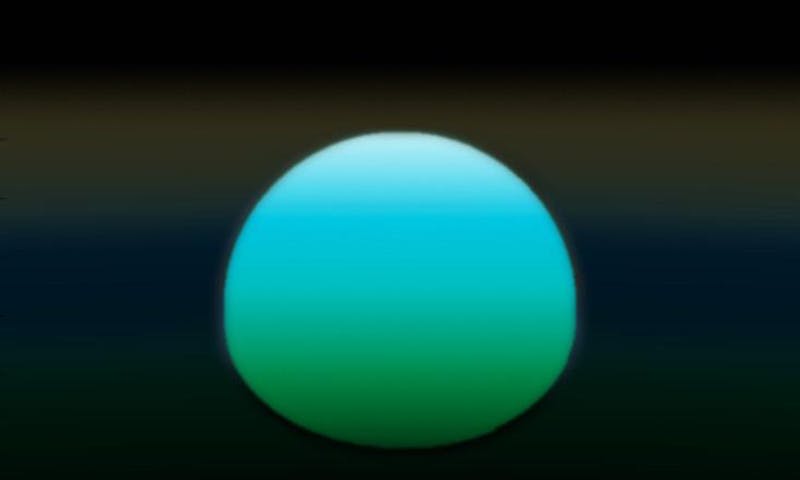 When it comes to exoplanets, reality is catching up with science fiction. Take Kepler-16b, a Saturn-size planet roughly 200 light-years from Earth that circles not just one star but a pair of stars. Nicknamed Tatooine, after the fictional home planet of Luke and Anakin Skywalker, this world must see sunsets that are twice as breathtaking.

Every evening the two suns, which are never far apart in the sky, will set one after the other in a dazzling display. Although it’s easy to picture two hazy red stars dipping below the horizon, astronomers remain unsure if these stars do in fact appear red. And on other exoplanets, “some of these sunsets would actually not look exactly like they do on Earth,” says Paul Anthony Wilson, an astronomer at the Paris Institute of Astrophysics. “They would be quite different in color.”

Of course, astronomers can’t see these sunsets—or even, most of the time, the planets—directly. Instead they wait for the moment when a star slightly dims, when a planet “transits,” or passes directly in front of it, and blocks a tiny portion of its light. But not all of the starlight that hits a planet’s disk is blocked: Some light actually slips through the highest layers of the planet’s atmosphere. “We collect the light that has passed through the atmosphere and we spread it out into its different colors,” says Wilson. “And what we notice is that when we look at exoplanet atmospheres, some of the colors are actually missing.”

These missing colors point to any chemicals—from familiar ones like water vapor to exotic ones like gaseous metals—that exist in abundance in these exoplanets’ upper atmospheres. These chemicals may absorb certain colors, or wavelengths, of the star’s light. So in a counter-intuitive connection that’s common to astronomy, any missing starlight represents the presence of certain chemicals in the planet’s atmosphere, while visible starlight can represent a lack of certain chemicals.

The most obvious implication of this is that we might be able to detect particular molecules, like oxygen, that could indicate that a planet is habitable—or even that it’s inhabited. The first exoplanet that we saw transiting its star, HD 209458b, is definitively not such a candidate. It’s a ball of gas about the mass of Jupiter that orbits eight times closer to its home star than Mercury orbits our Sun, and as such is blazingly hot.

Less than a year after the planet was discovered in 1999, astronomers swung the Hubble Space Telescope toward it with the hope of spotting the light that leaked through the outskirts of the planet’s shadow. And sure enough, the starlight could still be seen—save for certain wavelengths that are known to be absorbed by sodium. These orange tones were measurably diminished each time the planet crossed in front of its star, forming “lines” in the spectrum of the star. Why? There was likely a population of sodium atoms within the planet’s atmosphere that absorbed specific wavelengths of the star’s light.

High in the sky, the star looks white, much like our Sun at midday. But as it starts to sink, the sunlight travels farther throught the atmosphere, and the sodium absorbs increasing amounts of the red and orange colors, letting through the star’s blue and green light. The blue wavelengths scatter more—much like they do on Earth—and the star actually appears blue at first. As it starts to set, however, the blue light scatters so much that it’s scattered away (again, much like on Earth) and the star becomes a brilliant green.

So to an alien watching the sunset on HD 209458b, the star would transform from blue to green just before dipping below the murky horizon. Since the planet is gaseous, there’s no ground for an alien to stand on to actually watch the sunset, and Pont actually modeled the sunset as though it was being observed from a space station within the planet’s puffy atmosphere.

When astronomers watched HD 189733b, another hot Jupiter, cross in front of its home star, they expected to see results similar to HD 209458b: missing lines corresponding to chemicals in the planet’s atmosphere. So they were surprised when HD 189733b showed a no lines whatsoever. Could it be that there’s nothing much in its atmosphere to absorb specific colors of light? Or is there simply a thick, high-altitude layer of clouds that absorb and scatter light equally across all colors? Astronomers think it’s the latter.

So when it comes to HD 189733b’s sunset, there’s no single element to absorb a specific color of light like on HD 209458b. Instead, silicate dust scatters blue light away, leaving a red star to set below HD 189733b’s hazy horizon. It’s a far more terrestrial looking sunset.

But even a sunset on Earth might surprise you. The next time you have a clear view of the Sun setting over a distant horizon, closely watch the Sun’s disk sink lower and lower. Just before the upper rim of the Sun disappears for the night, it might quickly flash a vivid green—if you have a clear view of the distant horizon, a sky that’s free of haze, a lot of patience, and a good deal of luck.

The reason for the so-called green flash is two-fold. First, because light bends when it passes into a new medium, and blue light bends more than red light, the bottom edge of the setting Sun is reddish and the top edge is blueish. So in a sense the red Sun sets before the blue Sun. Second, because blue light is so easily scattered away in our atmosphere, the last light you’ll see is not blue but green—much like on HD 209458b.

When everything lines up like that, then our sunsets, too, can seem utterly alien.