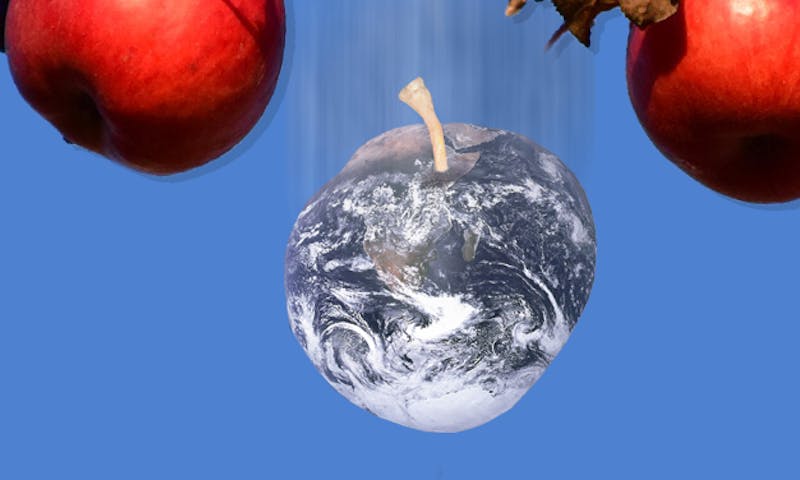 In the mid-1990s, I studied mathematics. I wasn’t really sure just what I wanted to do with my life, but I was awed by the power of mathematics to describe the natural world. After classes on differential geometry and Lie algebras, I attended a seminar series offered by the math department about the greatest problem in fundamental physics: how to quantize gravity and thereby bring all the forces of nature under one theoretical umbrella. The seminars focused on a new approach pioneered by Abhay Ashtekar at Penn State University. It wasn’t research I had previously encountered, and I came away with the impression that the problem had been solved; the news just hadn’t yet spread.

It seemed a clear victory for pure thought. The requirement of mathematical consistency also led, for example, to the discovery of the Higgs boson. Without the Higgs, the Standard Model of particle physics would stop working for particles that are collided at energies above 1 teraelectron-volts, well within the range of the Large Hadron Collider. Probabilities would no longer add to 100 percent and would cease to make mathematical sense. Something new thus had to turn up once that energy was crossed. The Higgs was the simplest possibility that physicists could think of—and, sure enough, they found it.

The most promising idea of all has come from an entirely unexpected direction.

As the years passed, however, I learned of other researchers with other methods who believed they, too, were close to solving the problem. String theory, loop quantum gravity, causal dynamical triangulation, asymptotically safe gravity, causal sets: Practitioners of these research programs were equally convinced they could decipher nature using nothing but the power of mathematics. They differed not because some had made mistakes in their mathematical derivations, but because they had started from different assumptions. Mathematics is a tool to carry through deductions, but no mathematical conclusion is better than its assumptions. Logic isn’t enough to decide among physical theories. The only way to find out which theory describes nature is experimental test.

But those working on different approaches rarely if ever spoke with one another; and, if they did, they never agreed. And why would they? In the absence of experimental evidence, they have no reason to agree. So, the math has piled up, tens of thousands of articles have been written, hundreds of conferences been held. But no approach has delivered an unambiguous solution. As decades passed without success, doubt began to overshadow the search for quantum gravity.

Paradoxically, in the ’90s, almost nobody was even working on how to find observational evidence for quantum gravity; it was thought to be impossible. The effects of quantum gravity are extremely weak. Physicists have estimated the probability of detecting the putative particles of gravity—gravitons—and found that, even with detectors the size of Jupiter put in orbit around a neutron star, chances would be slim.1

But is directly detecting gravitons the only way to find evidence for quantum gravity? It was a question that wouldn’t let me go. By the late ’90s, I had switched to studying physics. Most physicists working in quantum gravity still trust that their mathematics will eventually show the way. I don’t have that trust. But I also don’t have that pessimism that quantum gravity is experimentally inaccessible. To the contrary, I am cautiously hopeful that within my lifetime we will succeed in experimentally demonstrating that gravity is quantized.

Those of us who search for experimental evidence of quantum gravity today face a unique research problem: We neither have a theory nor data! But even in absence of a generally accepted theory of quantum gravity, we can investigate the general properties that are expected of quantum gravity, the ones that have been found in various candidate theories.

For instance, some theories suggest that spacetime is discrete. If so, it might have defects, much as crystals have defects, which could knock light off its path and blur images of distant quasars. Some theories suggest spacetime is a kind of substrate or fluid, in which case even a vacuum could have material properties such as viscosity (dragging on itself, like honey) or dispersion (which causes the colors of light to separate). Some theories predict the violation of symmetries that are respected in general relativity; others, that quantum fluctuations of spacetime could disturb sensitive quantum systems. We can search for all of these.

If that happened to the entire Earth, an apple that dropped off a tree would fall in two different directions at once.

You already know we haven’t found anything yet—otherwise you’d have heard of it. But even null results are valuable guides for theory development. They teach us that some ideas—for example, that spacetime might be a regular lattice—are simply incompatible with observations.

Of course, it would be more exciting to have an actual signal. In recent years, we have been able to identify several new opportunities to get to that goal. Take primordial gravitational waves. These small spacetime fluctuations in the early universe should have left a distinct imprint on the cosmic microwave background radiation. In 2014 the BICEP2 collaboration claimed to have measured that imprint, and although the claim turned out to be erroneous, this doesn’t mean the waves aren’t out there. It just means they’ll take more effort to find. And if we do detect them, they should have quantum properties that will guide our model-building. Lawrence Krauss of Arizona State University and Frank Wilczek of the Massachusetts Institute of Technology have argued that the detection of primordial gravitational waves would demonstrate that gravity must be quantized.2 Their argument is overly simplistic, but Vincent Vennin3 and Eugenio Bianchi4 have independently set out to find an analysis for microwave-background data which could distinguish quantum fluctuations from non-quantum fluctuations.

Then there are black holes. The physics of black holes is a major research topic in quantum gravity. For a long time, the consensus was that quantum-gravitational effects would be relevant only close to the center of the black hole, hidden behind the horizon that marks the hole’s boundary, and therefore unmeasurable from the outside. In the last several years, however, this consensus has been shaken up. For instance, one theoretical argument suggests that black holes are surrounded by a “firewall”—a material surface that would destroy in-falling matter. Although I and others have questioned this argument,5 it is not the only reason to think that quantum gravitational effects might show up at the horizon.

If they do, then observing black holes could reveal information about quantum gravity. Michael Kavic from Long Island University has proposed to search for binary systems that consist of a neutron star in orbit around a black hole. The neutron star emits radio waves, and if its beam scratches the black-hole horizon, the pulses we observe would be affected by the structure of the hole.6 In another approach, Niayesh Afshordi from the Perimeter Institute studies the gravitational waves produced by black-hole mergers. Quantum effects might show up as the newly merged black hole settles down into its final shape.7

But the most promising idea of all has come from an entirely unexpected direction. If the gravitational field can be quantized, it should exhibit characteristic quantum behaviors such as superposition, in which a system is in different states at the same time.

Take the prime example of quantum behavior: the double-slit experiment. If you fire a beam of electrons at a screen in which two slits have been cut, the electrons will form a distinctive wave pattern. To create that pattern, each electron must pass through both slits at the same time—those two paths are superposed. But the electron has a mass, which affects the gravitational field. If the electron is in a quantum superposition, then its field, too, should be in a quantum superposition. That is a deeply weird idea. If the same thing happened to the entire Earth, an apple that dropped off a tree would experience two different gravitational fields and fall in two different directions at once. This signals the incompatibility of quantum mechanics and general relativity; a superposition of the field would be inherently quantum gravitational.

So far, no one has seen any such effect, because a single electron’s gravitational field is too weak to measure. In recent years, however, various experimental groups have created superpositions of much more massive objects. The current state of the art is approximately a nanogram. Markus Aspelmeyer and his group in Vienna have set out on an ambitious project to measure the gravitational pull of masses as small as a milligram.8 The day is not so far off when we’ll be able to measure the gravitational field of quantum objects.

Taking a similar approach, Mauro Paternostro at Queen’s University Belfast and his collaborators are trying to pin down exactly which signatures would distinguish a quantized gravitational field from a non-quantized one.9 Their approach focuses on a quintessentially quantum property, entanglement, in which the properties of distinct objects are correlated. Consider two objects that interact gravitationally. The correlations between them will depend on whether the field is or isn’t quantized. Measure these correlations, so the idea goes, and you should be able to tell something about the quantization of the field.

That science requires empirical validation is old news, but the dream of many ancient philosophers that introspection suffices to unravel the mysteries of nature unfortunately has lived on among theorists working on quantum gravity. In the end, mental gymnastics, no matter how sophisticated, always come down to aesthetic or philosophical preferences in the choice of assumptions. Much of the literature on quantum gravity is dedicated to burying these preferences under piles of math.

Twenty years after I first heard of quantum gravity, the field is still dominated by those relying on mathematical consistency. But the ones who, like me, study the possibility to experimentally test quantum gravity have become more numerous. And the more apparent the failure of the mathematical method, the clearer it becomes that the only way forward is to look for experimental evidence, no matter how hard that will be. The first step would simply be to demonstrate that gravity is quantized. Then we could begin to probe the full range of gravitational phenomena. In so doing, we would promote quantum gravity from mathematics to physics.

And what becomes physics can become engineering. In contrast to many of my colleagues, I think that understanding how to quantize gravity will be of practical use. Such a theory will enhance our understanding not only of space and time, but also of quantum systems in general. It will be a long journey. But then, it took us 2,000 years from Aristotle’s four elements to today’s four forces. We are in it for the long haul.

Sabine Hossenfelder is a research fellow at the Frankfurt Institute for Advanced Studies. She blogs at backreaction.blogspot.com and tweets as @skdh

This article was originally published in our “Power” issue in February, 2017.