Why Cancer Drug Prices Keep Rising in the U.S.

Inside the price tactics of the cancer industrial complex. 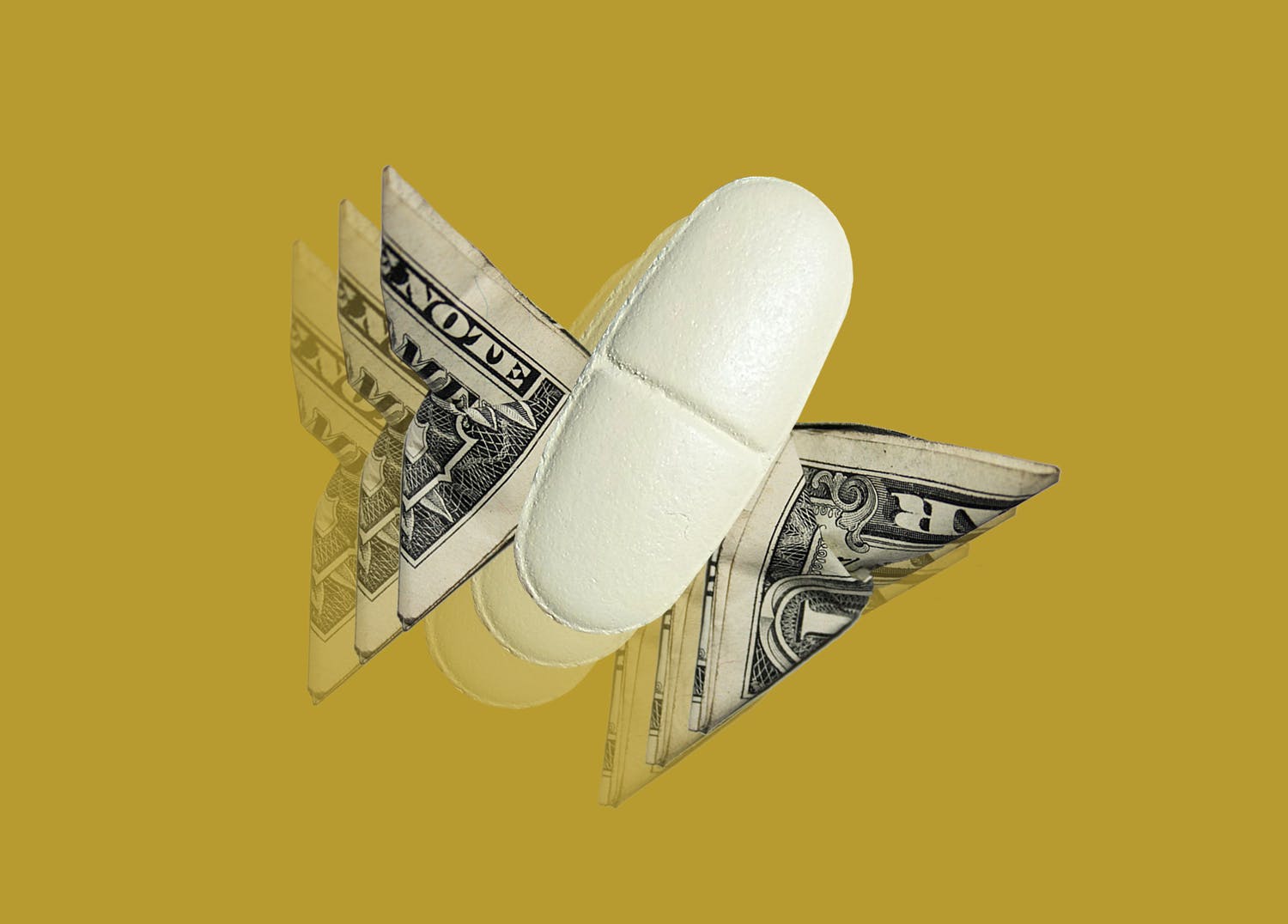 It comes as no surprise that cancer drugs cost a lot. Some years ago, researchers even coined the term “financial toxicity” to describe the distress caused by cancer prices. But Philip Savage was shocked by just how much they cost in the United States. “I knew there was a difference between selling prices in Europe and in the United States,” said Savage, a medical oncologist at Brighton and Sussex University Hospital in England. “But the prices in the U.S. go up year after year, above the inflation rate”—the rate at which the general level of prices rises each year, which usually hovers around 3 percent.

Cancer drugs cost more in the U.S. than anywhere in the world. But little research has been done comparing drug prices internationally beyond their initial cost, Savage said, so his team took on this task, examining how prices inflate after being introduced here and in the U.K.

The prices for the top 10 cancer drugs are 42 percent higher in the U.S. than they are in the United Kingdom, according to an analysis published by Savage and others in February in the Journal of Oncology Practice. One drug, Pegfilgrastim (Neulasta), a medication that helps the body make white blood cells, which defend against infection and disease after cancer treatments, costs more than four times as much in the United States. And prices for all the drugs described in the study continue to rise in the U.S., at an average of 8.8 percent each year, while in the U.K. it was 0.24 percent—“six drugs had unchanged prices, two had decreased prices, and two had modest price increases.”

No one benefits from this upward spiral except drug companies.

This means the expensive drugs may be out of reach for American patients who have mediocre insurance, or who don’t have it at all. I have interviewed people who’ve chosen to stop their cancer treatment rather than pay for drugs that will end up leaving their families destitute. In the U.K., though, once the price for a drug has been set, it usually remains static, Savage said. Prices usually go down after introduction, and can only be increased with government consent, or in light of new evidence that the drug is somehow more effective than originally thought, or that the drug has a new application, say, for treating a different disease, or a different stage of disease, or for helping more patients than originally envisioned.

Indeed, approximately 50 new anti-cancer agents have been introduced in the past five years alone to fight different types of cancer. And, as Savage put it in his paper: “The increasing costs of cancer drugs are approaching the limits of sustainability.” That means that healthcare systems and patients may soon be unable to afford them. Ever increasing drug prices place a growing burden on insurance and healthcare costs, and no one benefits from this upward spiral except drug companies. This is not the situation in countries besides the U.S.

The price of cancer drugs has fascinated me since I was treated, just over five years ago, for breast cancer at U.C. San Francisco. My chemo drugs cost about $27,000 for each treatment, or infusion. Patents still covered two of my three drugs, meaning their inventors had a protected monopoly, but the third, carboplatin, was not under such protection. Still, it cost just under $10,000 a dose.

I was lucky to have a generous insurance policy. Almost none of that money came out of my pocket. Yet the numbers still amaze. When I asked my oncologist about prices, she didn’t know what they were. My six doses of carboplatin alone came to about $57,000, just slightly less than this country’s median annual income.

Why was the price so inflated? It no longer had patent protection, which typically lasts 20 years. Since making it mostly involves dissolving drug components in water or acid, then evaporating the liquid and collecting the residue, the price can’t be due to high labor costs or expensive technology. Even if the entire dose were made of platinum, the precious metal on which it is based, carboplatin, would not cost nearly $10,000 a pop. The current per kilo price for platinum is $30,745. I’m not sure exactly how much of carboplatin is actually platinum—its other components are commonly available materials—but let’s say that it’s all platinum for the sake of argument. My dose was .9 grams. If you round that up to make the math easy, you would expect the drug to cost just $30.74.

That’s relatively close to the U.K. price, where a standard dose of carboplatin is £260 ($360) per infusion, according to Savage. When I wrote a post about this topic several years ago on my personal blog, one commenter, a veterinarian, observed that he uses carboplatin for canine cancer patients. It cost about $200 per dose. Though the commenter didn’t say how big a canine dose is, even if a dog is one-third the weight of a human and takes a correspondingly lower dose, the $200 price is orders of magnitude lower.

Drug makers have been known to buy out multiple competitors to restore a monopoly.

Hagop Kantarjian, an oncologist at MD Anderson Cancer Center, in Houston, and one of Savage’s co-authors, drilled down on some of the reasons for the high prices here in the States in a 2015 paper. “Brand-name drug companies,” he and his colleagues wrote, “have engaged in strategies that have delayed or prevented the availability of generic drugs, thereby increasing the price paid by patients, governments, and insurance companies.”

Sometimes, for example, pharma inventors will pay a company to delay introducing generic alternatives once a drug’s patent expires, effectively extending the lifespan of the inventor’s monopoly. Or they might slightly reformulate a drug to secure a new patent, market the “new” drug as better and extend its monopoly, as with the anti-acid reflux drugs Prilosec and Nexium. Companies also lobby against the import of drugs sold less expensively overseas. Drug makers have been known to buy out a competitor, or multiple competitors, to restore a monopoly and then increase drug prices overnight. This happened in 2014, for example, when Novartis pushed back the introduction of generic versions of its lung cancer drug Gleevec by seven months.

These price-inflating tactics are extreme in the U.S., but they’re deployed everywhere, Kantarjian concluded, if to a lesser extent. What keeps prices from getting out of hand outside of the United States is that most governments in the developed world negotiate prices with big pharma. That doesn’t happen here. “When a company comes out with a new cancer drug, there is little pushback on price” from the public, says David Howard, a professor of public health at Emory University. In a 2015 paper, he analyzed the launch prices of 58 cancer drugs introduced between 1995 and 2013. “Insurance companies don’t want to say they’re not going to cover a new treatment,” he said.

But he was reluctant to say that the increases are unsustainable, pointing out that 10 or 20 years ago, we were having the same discussion about drugs that cost far less than drugs today. “People used to say that $50,000 a year for a drug was outrageous,” Howard said. “But now, if you introduce a new drug and set the price at $50,000, people will say that’s underpriced.”

Do these prices have to ramp up indefinitely? Perhaps not. Savage poses this question in a study this year, observing that pharmaceutical companies and the British government negotiate cancer drug prices and that a “similar government-industry agreement may allow stability for both health care provision and the pharmaceutical industry in the United States.” Given the ongoing, intense debate over healthcare policy, it’s not clear whether such an agreement will be struck any time soon.

Getting treated for cancer is harrowing—that much is clear. Suffering patients lack the energy to protest the increasing costs of their treatments. Maybe those of us that are cancer-free should. Lower cancer costs may be in our future self-interest.