Why It’s Hard for Black Holes to Get Together

The universe’s greatest sinkholes have no trouble swallowing anything—except themselves. 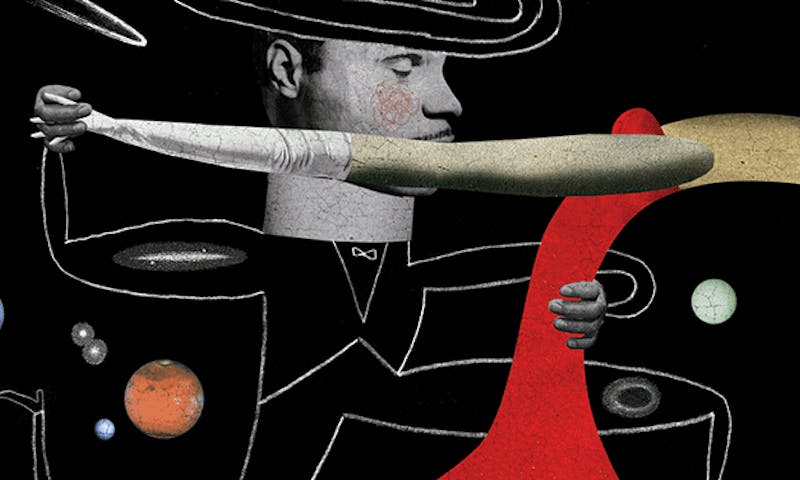 It begins like a classic romance: Two black holes meet. The attraction is practically instant. They dance around each other, swirling closer and closer, until …

Until what? As with any love affair, this is where things get messy.

First predicted by Einstein’s theory of general relativity, black holes are bottomless pits in the fabric of spacetime—gravitational wells so deep that nothing, not even light, can escape. Little black holes, trapping the mass of just a few suns, litter the universe like silent land mines, while the biggest ones, the supermassive black holes, occupy the center of nearly every galaxy, hoovering up torrents of infalling matter. These giants contain as much mass as hundreds of millions of suns; astronomers think that they formed from a long chain of galactic mergers—dozens, or perhaps even hundreds, of happy unions stretching back to the early days of the universe.

“Our whole picture of the formation of the structure of the universe involves this hierarchical process of small galaxies merging together to form large galaxies, and large galaxies merging to become even larger galaxies,” says physicist Robert Owen, who studies black-hole collisions at Oberlin College, in Ohio, as part of the Simulating eXtreme Spacetimes collaboration. Each merger takes hundreds of millions of years or more—too long to see in action—but theorists can use simulations to recreate the entire affair in computer code.

And here’s where the trouble starts. When physicists run their simulations, the two central black holes in a pair of colliding galaxies get stuck. Rarely, if ever, do black holes crash head-on. Instead, because they are typically traveling along separate, unaligned paths when they meet, their conserved angular momentum causes them to spiral toward each other. They corskscrew ever closer, captives of their mutual attraction, until they are orbiting at arms length—on the order of three light-years, or one parsec, apart. Then, like bashful lovers, they go no farther.

Why? Owen offers an analogy: Imagine that your hand is one of these black holes, and you’re swirling it in a bucket of water that represents the swarm of merging galactic matter. At first the water pushes against your hand, slowing it down. In space, this gravitational interaction, known as dynamical friction, decreases the angular momentum of a black hole in orbit, causing it to drift toward its partner. But over time, the water in the bucket starts flowing in the same direction as your hand, so you feel less resistance. Likewise, in a simulated galactic merger, stars and other objects align their motion with the paths of the two twirling black holes. And as dynamical friction gradually peters out, the black holes settle into stable orbits.

This is the fabric of spacetime itself moving.

If physicists’ story about the formation of the universe is correct, such paired black holes should eventually collide and consume each other, becoming one. But to do this, they must somehow lose enough energy to resume their inward spiral past the final parsec. Once they get very close—just billions of miles apart (about 0.001 parsec)—general relativity says that they will jettison the last of their orbital momentum in a great crescendo of gravitational waves, ripples in spacetime that ring out from a gravitational disturbance. This final outburst of energy plunges the black holes together, finishing the job in a matter of hours, days, or years, depending on how massive the black holes are.

What drives this fatal embrace? The question, known as the “final parsec problem,” isn’t just a matter of curiosity. The answer could change our understanding of how the universe built up its elaborate structure, and of the nature of gravity itself. Which is why, as physicists tinker with their simulations, astronomers are searching the skies for clues to how black holes solve the final parsec problem in the wild—if they do at all.

Over the past 30 years, astronomers have collected snapshots of hundreds of galaxies with dual supermassive black holes in various stages of collision. But even the most intimate portraits don’t reveal pairs circling nearer than a few thousand parsecs. “Looking for ones which are much closer to merger, on the parsec scale or smaller, is much harder,” says computational scientist Matthew Graham at the California Institute of Technology. Even the biggest telescopes on Earth can’t zoom in enough to resolve an image of two black holes in such a tight orbit.

So Graham and his colleagues are instead searching by an indirect route: flickering quasar light. Quasars are tremendously bright cores of massive, ancient galaxies. As matter swirls toward the supermassive black holes at their centers, it accumulates into a disc whose angular momentum converts some of this mass into radiation that outshines the galaxy itself. Because gas and dust don’t flow into the disc in a smooth stream, quasar light varies, typically in a random pattern.

But in late 2013 came a quasar that “stood out like a sore thumb,” Graham says. Using 10 years worth of data from a collaboration called the Catalina Real-Time Transient Survey, he and his colleagues picked up a strangely predictable signal: Some 3.5 billion light-years from Earth, quasar “PG 1302-102” appeared to be getting steadily brighter and dimmer every five and a half years, as if someone were slowly toggling some cosmic dimmer switch.

These dense, spinning corpses of exploded stars dot the cosmos like buoys on an ocean, sweeping beams of radio waves past Earth with atomic-clock accuracy.

What could be producing this cycle? “We came up with four or five different physical scenarios,” Graham says. The revolutions of a second supermassive black hole, for instance, could be routinely redirecting the quasar’s radiation jets like searchlight beams. Or perhaps this extra black hole was contorting the disc of whirling matter, thus brightening and dimming the quasar on a regular schedule. All of the researchers’ explanations had one thing in common: They made sense only if the black hole at the center of PG 1302- 102 was actually two black holes.

If there really is a black-hole binary at the center of PG 1302-102, Graham and his team estimate their separation at just 0.01 parsec. Another analysis, by a team at Columbia University, puts the pair even closer, at 0.001 parsec, or roughly the diameter of our solar system—about the point at which the black holes should be shedding gravitational waves like layers of clothing, plunging them into one another’s arms. Either way, if researchers are reading the signals from PG 1302-102 correctly, the moral is the same: Nature has solved the final parsec problem.

Graham and other researchers have so far identified more than 100 quasars in the Catalina data set that they think could contain black-hole binaries, all easily within the final parsec. If they can confirm their suspicion, these candidates could give them a peek at the grand finale of the collision saga, which nature has kept so well-hidden.

The big break in the final parsec problem, however—the revelation of how black holes unlock themselves from a stable orbit to complete their union—may come from looking at the universe in an entirely new way. “We’re really just fumbling around with electromagnetic waves,” Owen says, describing efforts to find tight black-hole binaries using traditional telescopes. Theoretically, a black-hole merger should release 100 million times as much energy as a supernova explosion, but all of that energy comes in the form of gravitational waves, not light. “We’re trying to hear with our eyes—it’s like inferring that a drum is oscillating just by looking at it, without being able to hear it.”

Observing black-hole collisions via gravitational waves could give astronomers a much clearer view. “The light coming from the centers of galaxies is often absorbed, re-emitted, or scattered by clouds of gas and dust,” producing a dim and distorted picture, explains Chiara Mingarelli, an astrophysicist at Caltech and the Max Planck Institute for Radio Astronomy. “[Gravitational] ripples don’t care if there’s gas and dust—they move through it, undisturbed. This is the fabric of spacetime itself moving.”

Spotting these ripples, however, won’t be easy: Gravitational-wave astronomy is a fledgling science, yet to return a single detection. What’s more, state-of-the-art laser-based observatories such as LIGO aren’t sensitive to the slowly oscillating waves that astronomers suspect are pumping out of intimate black-hole binaries like PG 1302-102.

Researchers hope instead to pick up these disturbances using “telescopes” provided by nature: millisecond pulsars. These dense, spinning corpses of exploded stars dot the cosmos like buoys on an ocean, sweeping beams of radio waves past Earth with atomic-clock accuracy. By monitoring the tick-tock of dozens of millisecond pulsars (a “pulsar timing array”) in our own galaxy, the Milky Way, astronomers can look for telltale deviations that reveal the surge of gravitational waves from two black holes crossing through the final parsec in a distant galaxy.

The spectral signature of these waves—from rapid flutters to slow swells, and everything in between—would provide data against which physicists can test new or revised models of the unification process. “Pulsar timing arrays are the only instrument we have to tell us what’s happening on this last-parsec scale—what’s really driving the final stages of binary black-hole mergers,” says Joseph Simon, a graduate student studying these collisions at the University of Wisconsin-Milwaukee.

The absence of gravitational waves could also provide an important clue. After almost a decade of timekeeping, Simon says, pulsar timing arrays “are finally sensitive enough that even non-detection tells us about what’s happening.” The fact that these arrays haven’t yet picked up the scent of gravitational waves could mean that theorists’ understanding of what happens to colliding black holes once they cross the final parsec isn’t quite right. Rather than erupt as gravitational radiation, some of the energy lost in that final plunge may instead bleed away through some yet unknown interaction with nearby stars and gas. Maybe the black holes fling away some stars that veer toward them, for instance. Or maybe their gravitational pull torques the disc of dust and gas around them. If physicists can work out this energy-sapping mechanism, it might explain how merging black holes cross the final parsec in the first place.

Their calculations will take them to the edges of Einstein’s predictions. “We talk about general relativity like it is an extremely well-confirmed theory, and by some measures it is the most precisely confirmed theory in physics,” Owen says. But scientists have never tested it in extreme gravitational events, such as a black hole merger, where physics dramatically diverges from the laws laid out by Isaac Newton more than three centuries ago; where familiar concepts like energy, momentum, and mass lose their meaning. If it turns out that gravitational outbursts from black-hole unions are indeed weaker than general relativity says they should be, it may be time for a tweak.

Ultimately, completing the black-hole love story will tell us what kind of ride we’re on here on Earth—whether we’re rolling along on a deluge of gravitational waves, or just a trickle. “This really is the difference between a very calm extragalactic sea of spacetime and a very violent sea of spacetime,” Owen says.

Kate Becker writes about physics, astronomy, and other wonders of the universe. She lives in Brookline, Massachusetts.