Your Guide to the Many Meanings of Quantum Mechanics 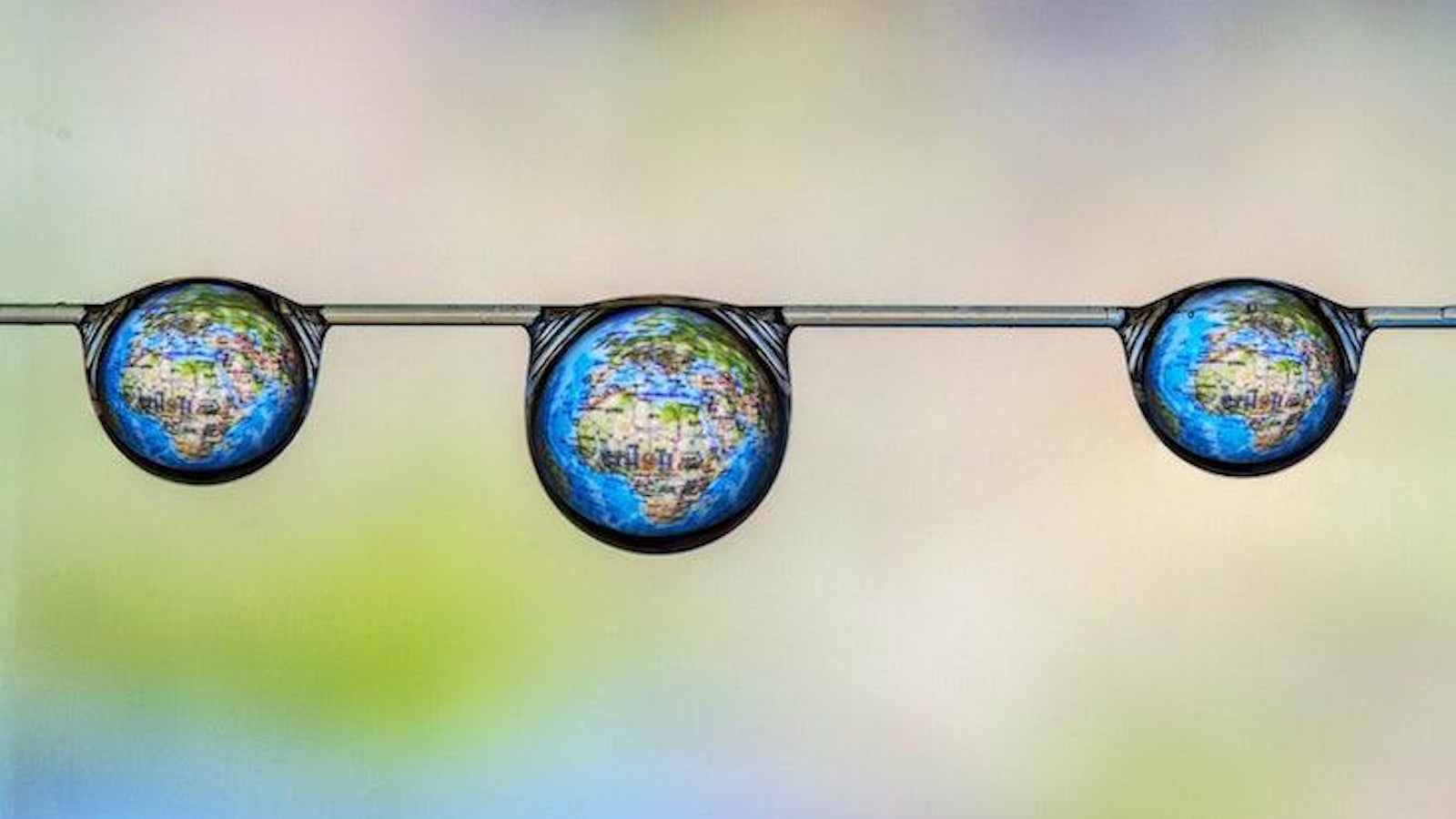 Quantum mechanics is more than a century old, but physicists still fight over what it means. Most of the hand wringing and knuckle cracking in their debates goes back to an assumption known as “realism.” This is the idea that science describes something—which we call “reality”—external to us, and to science. It’s a mode of thinking that comes to us naturally. It agrees well with our experience that the universe doesn’t seem to care what theories we have about it. Scientific history also shows that as empirical knowledge increases, we tend to converge on a shared explanation. This certainly suggests that science is somehow closing in on “the truth” about “how things really are.”

Alas, realism is ultimately a philosophical position that itself has no empirical basis. All we can tell for sure is whether a certain hypothesis is any good at describing what we observe. Yet whether that description is about something that is independent and external to us, the observer, is a question we cannot ourselves ever answer.

This, needless to say, is not a new conundrum, but one that philosophers have discussed for as long as there’ve been philosophers. But it is alive and kicking in the debate about interpretations of quantum mechanics today, as Jim Baggott reminds us in his new book Quantum Reality: The Quest for the Real Meaning of Quantum Mechanics. If this is the age of quantum reason, then Baggott is its Voltaire. I would be hard pressed to think of any author more prolific than Baggott when it comes to quantum mechanics. Prior to Quantum Reality, he also published The Meaning of Quantum Theory, The Quantum Story, Quantum Space, The Quantum Cookbook, and let us not forget Beyond Measure: Modern Physics, Philosophy and the Meaning of (guess what) Quantum Theory.

Baggott’s obsession with quantum mechanics is not driven by public demand. Not exclusively, anyway. Though quantum-everything has been a running theme in recent popular science, Baggott’s writing chronicles his own quest for sense-making. And so, Quantum Reality is, as many of Baggott’s earlier books, an attempt to bring order to a confounding subject. He succeeds only partly. But even that is a remarkable achievement because, for almost a century, physicists have fought over just which of over a dozen different interpretations of quantum mechanics is correct, or what it even means to call one of them “correct.” Baggott doesn’t end the fight but puts it in context by digging up the family feuds which started the war. With that, he guides you in making sense of quantum mechanics (to the extent that that’s possible), and the controversies surrounding it.

I am also personally offended that Baggott gives short shrift to superdeterminism.

Baggott puts the blame on physicists’ dismissal of metaphysics. Metaphysics is a term coined by Aristotle. Greek for “after physics,” Aristotle literally used it to refer to the chapters after physics. Today, metaphysics is a branch of philosophy that, loosely speaking, deals with those assumptions which physicists make in the constructions of theories that are not grounded in empirical evidence. Physicists draw on metaphysics all the time, yet few of them are aware of what they do.

Indeed, the biggest divide in the quantum foundations community today is metaphysical: It is that between realists and non-realists. Those in the camp of realism long for a theory whose mathematical structures can be interpreted as how things really are, while the non-realists take quantum mechanics to be a theory about what we know. “Know about what?” you may ask. Ah, but that’s a question only a realist would ask.

The question “What is real?” is inescapable if you study quantum mechanics, for it has a most peculiar property: It deals with objects called “wave-functions” that are necessary to derive predictions, but do not themselves correspond to anything observable. So are wave-functions real or not?

This issue becomes particularly pressing when one makes a measurement on a quantum system. In this case, the wave-function can change, suddenly and instantaneously, everywhere. If this so-called collapse was a physical process, it would conflict with Albert Einstein’s speed-of-light limit and constitute, in Einstein’s words, a “spooky action at a distance.” Then again, the wave-function collapse itself is not something we observe. So, if you can overcome the temptation to think of the wave-function as a real object, there is nothing funny going on here. It just, well, feels funny.

On his mission to exhume the metaphysics of quantum mechanics, Baggott does a remarkably thorough job dissecting the idea that quantum mechanics is linked to consciousness, a topic most writers tend to avoid. Or at least do away with so quickly you’re not sure they said anything at all. Indeed, in Quantum Reality I found a more comprehensible explanation of the Penrose-Hameroff conjecture (that the origin of consciousness is coherent quantum states of microtubules in the human brain) than I have heard from both Penrose and Hameroff themselves. And if you want to know how the Many-Minds Interpretation works or just how bad an idea Quantum Suicide is, Baggott has you covered on that, too.

Baggott’s analysis does not merely focus on the most popular interpretations of quantum mechanics, but includes many of the lesser known ones. For the most part he holds back his own opinions and does an amazing job of objectively going through the pros and cons of each approach. It is only in the chapter on the Many-Worlds Interpretation that he voices his dismay.

The Many-Worlds Interpretation has it that each time we make a measurement, reality splits into several alternative versions, identical except for the measurement outcome. Early in Quantum Reality, Baggott likens science to a ship that travels back and forth over the “Sea of Representation” from the rocky shores of Empirical Reality to the sandy beaches of Metaphysical Reality. Along the way, the ship can get caught in “a whirlpool of unconstrained metaphysical nonsense.” According to Baggott, this is what happens with the Many-Worlds Interpretation. It is pure metaphysics, he complains, that has lost contact with empirical reality.

Here I disagree with Baggott. I am very much an instrumentalist, and am comfortable with the “shut up and calculate” doctrine. Nevertheless, metaphysics matters, in my mind, because philosophical preconceptions, especially those we don’t acknowledge, taint which theories we are even willing to engage with.

In contrast to Baggott, however, the way I evaluate theories is by asking “What can you do with it?” On that account, the Many-Worlds Interpretation isn’t any better or worse than the Copenhagen Interpretation (which is non-realist and says you’re not supposed to ask what happens during wave-function collapse) or the Pilot Waves Interpretation (that avoids the collapse postulate by introducing a non-local yet unobservable guiding field for particles). And if one wants to gauge scientific promise, it does not make sense to lump collapse models and hidden-variable models—which are modifications of quantum mechanics—together with the interpretations, because the purpose of modifying quantum mechanics is to explain more data.

I am also personally offended that Baggott gives short shrift to superdeterminism. In this approach, quantum mechanics is emergent from a deterministic hidden-variables model which acknowledges that everything in the universe is connected with everything else. He either mistakenly or accidentally leaves the reader with the impression that these have been ruled out for good, which is most definitely not the case. I cannot really blame Baggott for this, though, because this omission is widespread in the scientific literature. I have complained about this on the pages of this magazine, and will leave it at that.

So, personal grievances aside, I much enjoyed reading Baggott’s new book. Engagingly written, and requiring no background knowledge in physics, it is likely to teach you something new. Even I learned some new bits, such as the glorious aside Baggott drily delivers that Francis Bacon died from pneumonia that he contracted from stuffing a dead chicken with snow to see if it would preserve it.

Sabine Hossenfelder is a Research Fellow at the Frankfurt Institute for Advanced Studies where she works on modifications of general relativity, phenomenological quantum gravity, and the foundations of quantum mechanics. If you want to know more about what is going wrong with the foundations of physics, read her book Lost in Math: How Beauty Leads Physics Astray.