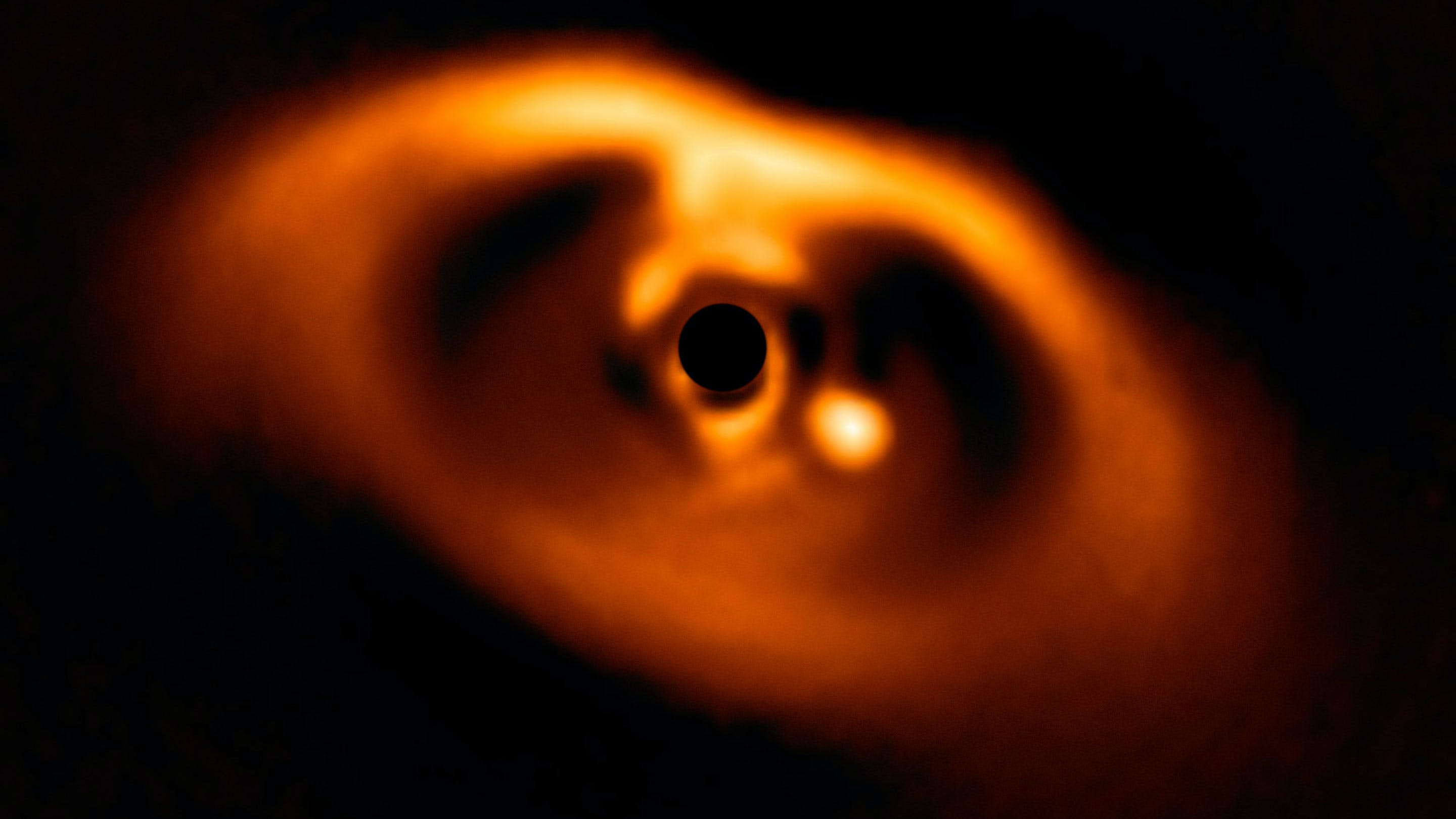 Astronomers have spent decades, if not centuries, hoping to see embryonic planets. As of a year ago, the closest they had come was the discovery of gaps, thought to be caused by budding planets, in the spinning disks of gas and dust that surround young stars. But they weren’t sure how to interpret these indirect clues.

What a difference a year makes. Increasingly detailed observations of a star called PDS 70, which is a little smaller than the sun and some 370 light-years from Earth, have revealed not just one newborn planet, but evidence of a second. These planets are so young that they appear to still be growing. What’s more, a recent paper argues that one of these planets is surrounded by its own swirling disk of gas and dust, the kind of structure thought to hatch large moons. If confirmed, this would be a spectacular validation of long-held ideas about how planets and their moons form.

The first discovery came last June, when a team of astronomers published an image of a planet orbiting inside the disk around PDS 70, a young star roughly 5 million years old (our own sun is roughly 1,000 times older). A month later, another study showed that the planet was emitting a deep red light as hot hydrogen atoms fell down onto it, which suggested that the world is still beefing up.

Then just last week, astronomers announced that PDS 70 hosts a second giant baby planet still sucking up ambient hydrogen. “What makes PDS 70 superlative is that it’s absolutely unambiguous that there’s at least one planet there, and the evidence for a second planet is very convincing,” said Kate Follette, an astronomer at Amherst College.

Most of these discoveries come from the Very Large Telescope (VLT), which is actually a set of four enormous telescopes perched on a mountaintop in Chile’s Atacama Desert. To find the second planet and provide even further confirmation for the first one, a team led by Sebastiaan Haffert at Leiden University in the Netherlands used MUSE, a new instrument on the VLT, to search for emission from hydrogen. They got their data on just one clear night in the summer of 2018, when MUSE was still being tested. “Given how robustly they detected both planets, it’s really exciting for the future,” Follette said.

So far, the two planets seem to match predictions by previously untested theories of planet formation, said Zhaohuan Zhu, an astrophysicist at the University of Nevada, Las Vegas. Back in 2012—eons ago in this fast-moving field—astronomers first saw an empty, dust-free band in the disk of PDS 70. It starts from a position equivalent to where Uranus orbits in our solar system and extends to about three times that distance.

The first planet, dubbed PDS 70b, prowls right outside the inner edge of this gap in the disk. But one planet alone couldn’t explain why the gap was so wide. Two planets, however, would in theory open up a much wider gap. That’s exactly what the new data show. With a second planet found near the outer edge of the gap, circling the star once for every two complete orbits by the inner planet, “everything seems to start to connect,” Zhu said.

Because it has bright planets far from their star, PDS 70 is perfectly tuned to give up its secrets. “PDS 70 is really becoming a benchmark system,” said Julien Girard, an astronomer at the Space Telescope Science Institute who collaborated on the discoveries of both the second planet and the possible moon-forming disk.

The more tentative detection of the moon-hatching disk also came from the VLT, through another instrument called Sinfoni. Once the initial discovery of PDS 70b was made last year, Valentin Christiaens at Monash University in Australia looked for the same point of light in his own separate measurements of the system. “When we eventually saw the blob, I got very excited,” he said.

These measurements showed that the light from PDS 70b included more red light than would be expected from just a planet. Christaens and his team argue that the data reveal a disk of dusty material around the planet that absorbs heat, then rereleases it in infrared wavelengths.

In models of how solar systems form, smaller disks like these coalesce into satellites such as the four Jovian moons discovered by Galileo. If the initial observations are confirmed by other observatories, they’ll help to validate these ideas. “It’s nice confirmation that you could have a circumplanetary disk around giant planets, that Jupiter is not that special,” Zhu said.

He also points out that in our own solar system, two of the most promising targets in the search for life, Europa and Enceladus, orbit giant planets. If infant gas giants often host disks that can make moons, Zhu said, “maybe Europa or Enceladus could be common in our galaxy.”

Lead image: This is the first clear image of a planet caught in the act of formation. The star, PDS 70, is blacked out at the center of the image, while the planet, PDS 70b, is visible as a bright dot to its right. Astronomers just discovered a second newborn planet circling PDS 70. Credit: ESO/A. Müller et al