A Riot of Color Lurking in the Amazon 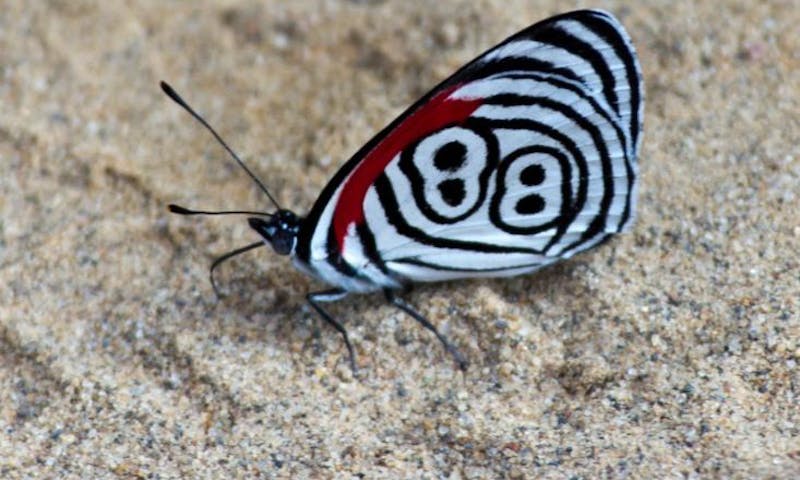 Imagine a tropical rainforest and the picture that appears in your mind’s eye is probably filled with green and brown. It’s true that those colors dominate the landscape, but a closer look at some of the jungle’s inhabitants reveals tremendous variation. I just returned from a trip to the Amazon, and here are some of the more creatively colored animals I found, representing practically every part of the rainbow.

In nature, bright colors usually mean “stay away.” Bugs that might taste good to birds usually rely on camouflage to avoid being found and gobbled up. Those that taste nasty can instead boldly advertise their unpalatability, like this butterfly that appears to sport an “88” on its back.

In the late 1980s, a pair of Brazilian lepidopterists tempted a group of birds called tyrant flycatchers with a variety of butterflies, including this species. As expected, most of the birds didn’t bother chasing after the red-shouldered Diaethria clymena butterflies that were released nearby. Only 14 percent of birds bothered catching one, and in most cases they spit it right out. The butterflies flapped away to take cover, apparently unharmed by their close encounters with bird beaks.

Salt is at a premium in the Peruvian Amazon. Even though Peru is on the Pacific coast of South America, the clouds that put the rain in the rainforest form over the Atlantic Ocean, and eventually move west. By the time the clouds reach Peru, they’ve given up most of their nutrients—including salt, a critical substance for living things’ basic functioning. So the animals that live in that part of the Amazon have had to evolve creative solutions for finding their all-important sodium. These colorful butterflies have learned that they can acquire salt by drinking turtle tears!

It’s not just turtles that give up their salt to Amazonian insects. Here a bright yellow-and-black butterfly tries to find salt in human sweat.

Though belonging to the taxonomic family generally called toucans, this jewel-toned bird is actually a member of a genus (Pteroglossus) called aracaris. Among the most colorful of aracaris, the chestnut-eared variety doesn’t use its mighty bill to carve out the holes in which it nests; it instead relies on nest cavities already made by woodpeckers. Darwin thought their large beaks were used to advertise to potential mates, but both males’ and females’ beaks are equally colorful.

Recent research has suggested instead that the massive beaks allow the birds to keep cool in the hot, humid rainforest. As blood flows through the beak, the surrounding air can cool it down before it returns to the bird’s body. That explains the aracari’s large beak, but not its color. As for that question, nobody has come up with a convincing explanation yet. Perhaps, as with parrots, the vivid coloration allows individuals to recognize others of their species.

Parrots always bring their IDs to the bar

At the Tambopata Research Center, researchers have been observing parrots of all kinds visiting clay licks each morning, where they gather to gobble up clay. At one time, researchers thought that the parrots might use in the absorbent, clay-like soil to neutralize the harmful toxins that they accumulate from a fruit-heavy diet. Instead, it turns out that salt is simply in low supply. Just like the butterflies who lap up reptile tears, for these birds, mouthfuls of clay are sort of like potato chips: an excellent source of sodium.

In just this single photo there are at least seven species: scarlet macaws (Ara macao), blue-headed parrots (Pinus menstruus), mealy parrots (Amazona farinosa), yellow-crowned parrots (Amazona ochrocephala), orange-cheeked parrots (Pionopsitta barrabandi), chestnut-fronted macaws (Ara severa), and red-bellied macaws (Ara manilata). Their bold colors may help individuals (and also nosy humans) recognize others of their own species, and they can probably get away with it: They don’t have many predators in the jungle. The massive harpy eagles, for example, need to eat monkeys and sloths to get enough nutrition. A measly macaw or two would barely suffice as an appetizer.

No tooth but a sweet tooth

All the parrots in the Tambopata National Reserve are wild, but in the early 90s, some researchers hand-raised a handful of individuals as part of an experiment on macaw chick development. While those birds have gone on to lead normal parrot lives, many still nest in the vicinity of the research center, and have learned that the center is a decent place to finda—or, steal—food. This male scarlet macaw (Ara macao) even learned to pop open the sugar jar at the coffee station. It doesn’t particularly need extra sugar in its diet, but even a macaw can’t resist the allure of junk food.

There’s not a whole lot of information out there on lizards from the part of the New World known as the Neotropics. For some varieties, little more is known than a species’s name and appearance. This individual is probably a cocha whiptail (Kentropyx altamazonica), a lizard that likes wet forest floors in the western Amazon. Its brown and green coloration seems to help it blend in with the leaf litter. Even while looking directly at it, it took me a while to work out what was lizard and what was just leaves and twigs. Luckily, he or she stayed still long enough to pose for a photograph.

Some jungle critters do a really good job of hiding. See if you can spot this great potoo, hiding up in the rainforest canopy. The nightjar relative blends in so well with the tree branches that it’s hard to imagine that he or she didn’t evolve this sort of coloration to avoid detection by some predator. But while their nests are susceptible to predation, the great potoo is actually hiding instead from the insects that make up a majority of its diet. A hapless beetle or katydid—or sometimes even a small bat!—flies by unaware of the looming threat and suddenly it finds itself on a one-way trip down the bird’s throat. Impressively, it’s not their color alone that allows them to blend in, but also the shape of their bodies. When sitting still, the great potoo looks just like a lifeless stump.

Fast-fleeing insects and birds can get away with being brightly colored, but when you’re a mammal not much larger than a house cat, pretty much every big predator wants to eat you—especially the three-to-four-foot-tall harpy eagles, with their five-inch talons. Maybe that’s why arboreal mammals like monkeys, including this saddleback tamarin (Saguinus fuscicollis), tend to be a bit more drab in their appearance: It’s easier to avoid becoming someone else’s dinner when they have to work harder to find you hiding in the branches and leaves. Indeed, some researchers think that most mammals have darker backs and lighter bellies for just this reason: A darker back helps protect the monkeys from aerial predators, while their lighter front helps them blend in with the bright sun to hide from predators closer to the ground.