The Arctic Ocean could become a critical laboratory for understanding the process of climate change. 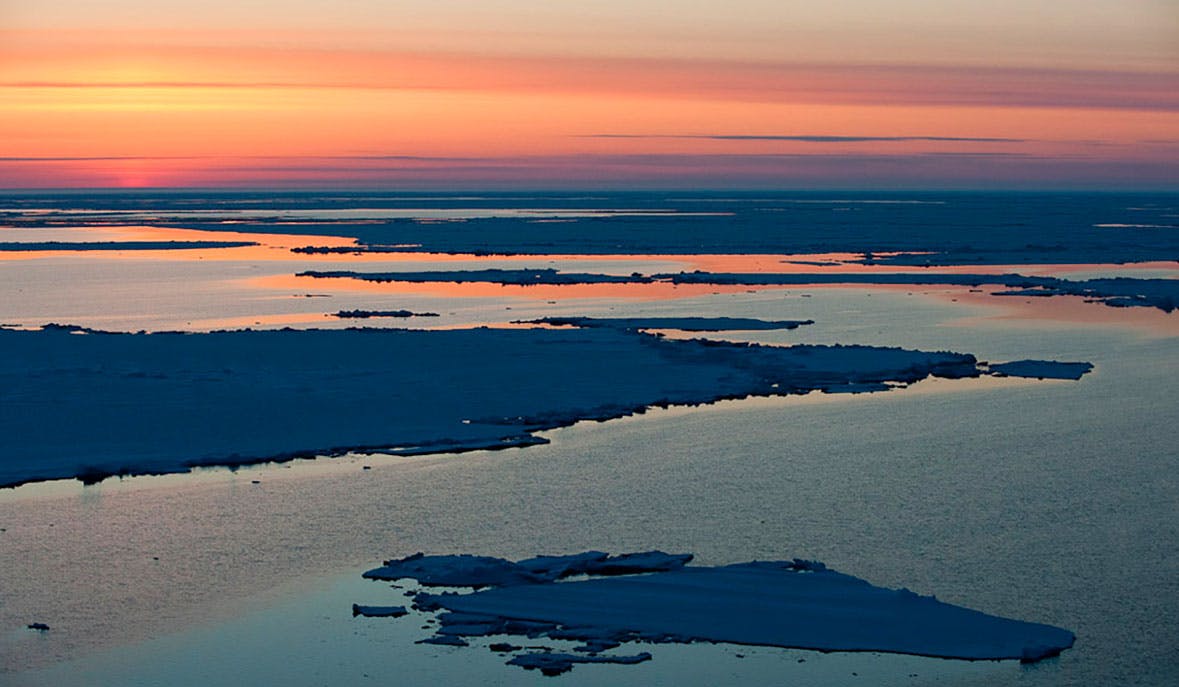 Understanding the impacts of climate change on the Arctic Ocean is one of the great challenges of the 21st century. The Arctic has remained a truly hidden ocean, veiled by its ice sheet nearly year-round. Its harsh conditions and remote location have left it largely unexplored—the last ocean region to give up its secrets to science. Indeed, it’s been 20 years since the last major effort to measure biological activity along a transect of the Arctic Ocean.

We don’t even have a baseline for the Arctic against which to measure change.

This ignorance could be costly, however, as the Arctic is changing rapidly. For one thing, atmospheric warming from climate change at polar latitudes is double that of lower latitudes. As a result, more and more of the Arctic sea ice now melts off during the summer, and when it refreezes in winter, the ice is thinner. By some estimates, the summer Arctic could be effectively ice-free in two or three decades. That in turn will bring a host of changes, some of which are already starting—more human activity from shipping, commercial fishing, tourism, and oil and mineral exploration, increased coastal erosion, stormier weather, and potentially large changes to the marine ecosystem. The end of the summer sea ice will also likely mean the end for polar bears and other species that depend on it for access to fishing.

At a less visible level, the end of the sea ice will eliminate the algae that grow on its lower surface and may also diminish native plankton, altering the ocean’s biological productivity and disrupting the marine food chain. The Arctic is also more sensitive than other oceans to increasing acidification from higher levels of dissolved carbon dioxide.

These changes make the Arctic a critical laboratory in which to study climate change—in effect, a place where we can understand and document the linkages between global warming and the physical and chemical changes that in turn drive ecosystem change. However, understanding of the Arctic is sparse because it has been difficult and expensive to mount expeditions in the summer; during the winter, the region has been effectively inaccessible. We don’t even have a baseline for the Arctic against which to measure change, let alone the kind of continuous monitoring and observing tools that are needed to understand processes and measure rates of change.

The basic research challenge is thus to identify the present state of the Arctic marine system, explore system responses to climate change, and identify and predict ongoing and future changes.

The summer Arctic could be effectively ice-free in two or three decades.

That’s important, because as climate change accelerates, many of those changes and impacts will happen in latitudes where people live, too. Moreover, changes in the Arctic have impact elsewhere. Melting polar ice sheets, such as the Greenland Ice Sheet, accelerate rising sea levels. Warming temperatures in the Arctic modify atmospheric patterns, particularly the high altitude jet stream that flows from west to east around the earth, with direct impacts on weather across the Northern Hemisphere. One theory is that the jet stream will exhibit greater meanders, driving greater extremes in temperature and drought for the United States and Europe. The unseasonably warm weather in Alaska and Boston’s record snow falls in 2015 might be examples of such meandering. A warmer Arctic will also mean thawing permafrost, which not only increases local coastal erosion and run-off of organic materials into the ocean, but also releases methane—a very potent greenhouse gas—to the atmosphere. In effect, thawing permafrost creates a positive feedback loop: The warmer it gets in the Arctic, the more atmospheric warming accelerates.

That makes the Arctic an invaluable laboratory, as well as an early warning system for climate change —if we make the effort to pay attention and understand.

How to Monitor the Arctic

Arctic research has been limited by the high logistics costs of operating in a demanding and remote environment. A six-week summer expedition on an icebreaker costs about $2 million for the ship time alone. Winter expeditions are so challenging they are seldom carried out, leaving the Arctic largely unobserved for most of the year.

Fortunately, new ways to monitor the Arctic Ocean and measure its properties are emerging. Autonomous platforms such as gliders, ice-tethered profilers, and long-range unmanned, self-guided vehicles—underwater drones—can complement ship-based methods, making possible more efficient and year-round observations. More capable sensors are under development that are smaller, more energy-efficient, and capable of measuring additional chemical and biological properties. The data these new platforms and sensors could collect, together with ship-based expeditionary research, would help scientists sort out how physical and chemical changes affect the Arctic ecosystem—in effect, what climate change means for living things.

As the Arctic region fast approaches a potential tipping point, philanthropy can make a pivotal difference, providing a unifying force for otherwise fragmented efforts. An investment of $100 million over five years would accelerate technology development, expand collaborative international observing and expeditionary efforts, and enable scientists to create the first comprehensive assessment of the state of the physical, chemical, and biological Arctic Ocean.

An investment of $1 billion over 10 years would enable the creation of a comprehensive Arctic observation system. Investments would extend existing technology and accelerate new technology to create an efficient basin-scale observation system capable of year-round data collection. Expeditions would be used to develop a phenomenological foundation for improved models coupled to the observation system and to look more closely at interactions and processes that cannot be completely described using sensors. Such an effort would transform our understanding of the Arctic and create a monitoring system capable of both tracking the evolving state of the Arctic and improving our capabilities to predict changes, mitigate impacts, and minimize the risks to human activities, both in the region and globally.

Given that we only have one Earth, that we continue to use carbon-based fuels that cause warming, and that we’re uncertain about how climate change will unfold, the Arctic provides a window to the future that philanthropy can open.