Are We Headed for a Sixth Extinction?

The stability of life on Earth depends on the biogeochemical cycles of carbon, which in turn depend on poorly understood microbial ecosystems. 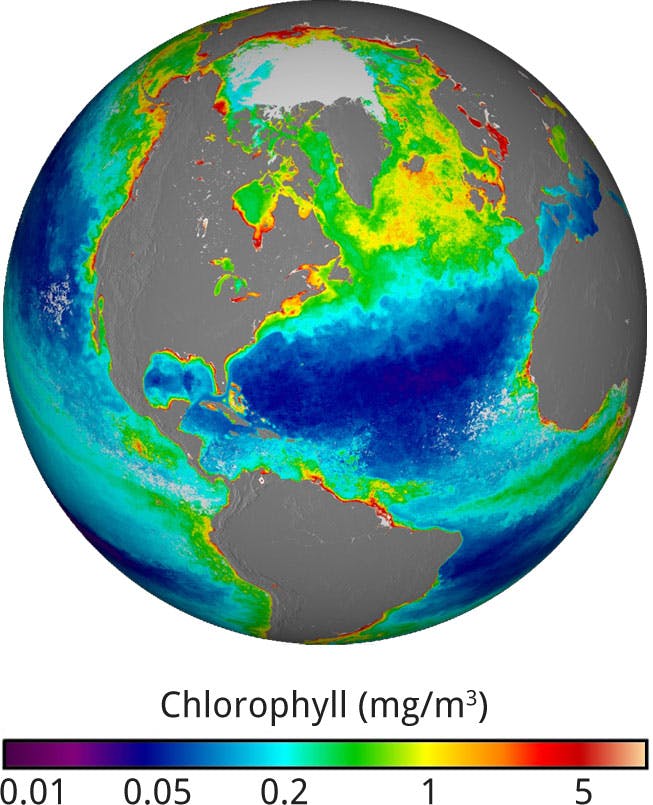 Five times in the last 500 million years, more than three-fourths of living species have vanished in mass extinctions. Each of these events (see Table 1) is associated with a significant change in Earth’s carbon cycle. Some scientists think that human-induced environmental change—including our massive discharges of carbon into the atmosphere—may soon cause a sixth major extinction. Is such a catastrophe really possible?

Respiration is neither visible nor well understood.

The key to answering this question lies in the recognition that the Earth’s physical environment and the life it supports continuously interact as a closely coupled system. The core of this interaction is the carbon cycle. Plants and microorganisms, both on land and in the surface layers of the ocean, take carbon dioxide from the atmosphere and “fix” the carbon in organic matter through the process of photosynthesis. Other organisms—most importantly microbes, but also animals and people—metabolize organic matter, releasing carbon back to the atmosphere, a process known as respiration. But while photosynthesis is visible in the greening of leaves and the spectacular algal blooms on the ocean surface (see illustration of ocean chlorophyll concentrations), respiration is neither visible nor well understood. That’s because respiration occurs in different places and at very different timescales. In the ocean’s surface layers, for example, respiration happens fairly quickly—minutes to months. A small percentage of organic matter escapes degradation and drops slowly to the bottom of the ocean, becoming buried in the sediments, where respiration can take thousands of years. So over time, lots of organic carbon accumulates at the bottom of the ocean. And some of that gets embedded in sedimentary rocks, where the effective timescale for respiration can be many millions of years. Virtually all of the fossil fuels we burn—oil, coal, natural gas—come from that latter reservoir of organic carbon.

Over the last billion years, including through multiple ice ages, the Earth’s carbon cycle has remained mostly stable. That means that the process of fixing carbon through photosynthesis and the process of respiration have remained approximately in balance. But because the ocean sediments contain much more carbon than the atmosphere—at least 10 times as much—even small changes in respiration rates could have a huge, de-stabilizing impact. A disruption in the carbon cycle that rapidly released large amounts of carbon dioxide, for example, could potentially cause mass extinctions—by triggering a rapid shift to warmer climates, or by acidifying the oceans, or by other mechanisms.

The conventional explanation for what killed off the dinosaurs and caused the most recent, end-Cretaceous mass extinction was a huge asteroid impact on Earth—which certainly caused a massive debris shower and likely darkened the sky, perhaps for years. This and some other extinctions are also associated with massive and widespread volcanism. Are these sufficient to trigger mass extinctions, even in the deep oceans? In at least one case, our calculations strongly suggest that these physical events, by themselves, were not enough to explain the observed changes—that whatever triggering role impacts or volcanism may have played, other factors contributed to and amplified changes in the carbon cycle. We believe that acceleration of the microbial respiration rate must have been involved, thus releasing carbon from the deep ocean and sediment reservoirs. In any event, the evidence is clear that significant disruptions or instabilities have punctuated an otherwise stable carbon cycle throughout Earth’s history, with changes so rapid or so large that they triggered a shift to a new and different equilibrium, with profound impact on all living things.

One example is the microbial invention, about two-and-a-half billion years ago, of photosynthesis—resulting in a transition from an atmosphere without oxygen to a stable oxygenated state. That in turn enabled the evolution of macroscopic, multi-cellular life, including us. Another example is the end-Permian extinction, the most severe in Earth history, which was immediately preceded by an explosive increase of carbon in the atmosphere and the oceans. A recent research paper attributes the surge of carbon to the rapid evolution of a new microbial mechanism for the conversion of organic matter to methane, which accelerated respiration. In both cases, the disruption of the carbon cycle was driven or at least accelerated by life itself—microbial life. Other mass extinctions are also associated with severe disruption of the carbon cycle, although the specific triggering mechanisms are not known. But what seems clear is that small changes in the ways microbes respire organic matter can have considerable global impact. Might the current human releases of carbon trigger such a change as well, enabling microorganisms to accelerate their conversion of the huge reservoir of marine sedimentary carbon into carbon dioxide? Understanding the mechanisms of respiration in detail—including in the deep ocean and the sediment reservoirs of organic carbon—is thus critical to understanding the potential for another mass extinction. That is what we propose to do.

The needed research must focus on three key objectives:

For the modern carbon cycle, the principal problem concerns the fate of marine organic carbon that resists degradation for decades or longer. Two reservoirs are critical: dissolved organic carbon, which can persist for thousands of years, and sedimentary organic carbon, which can persist for millions of years. Imbalances in the carbon cycle are determined by shifts of these time scales or respiration rates. These rates are especially hard to determine when organic compounds are complex and/or the organic matter is tightly embedded in sedimentary rocks. We will use new tools that enable us to measure how specific enzymes bind to specific organic molecules found in seawater. And we will do controlled experiments to measure how microbes, organic matter, and minerals interact in sediments, developing new methods such as high- resolution calorimeters to measure the rates of degradation in the lab and in the field.

Unlike the major extinction events already mentioned, many past disturbances of the carbon cycle had no large-scale impact on life. What sets them apart? Sedimentary rocks deposited at different times (see picture of end-Permian sediments) record indications of environmental change, but the interpretation of these signals is an evolving science. The project will reconstruct, for as many events as possible, the sequence of environmental changes, focusing on fluxes of carbon. By employing mathematical techniques similar to those used to establish the modern theory of chaos, we expect to discover distinct classes of behavior that separate true instabilities from more gradual environmental change. During periods of unstable growth, important changes in the molecular composition of organic matter are likely, and by analyzing these changes we expect to discover mechanisms associated with or leading to instabilities of the Earth’s carbon cycle. Especially pertinent is the potential for rapid evolution in microbial ecosystems. Rapid evolution modifies the structure of populations and thus can alter the respiration rates—with impact on all components of ecosystems and potentially leading to instability, disruption, and the emergence of new stable states.

The central challenge will be to use these new findings to develop a theory of instability for the Earth’s carbon cycle system. Linking the specific mechanisms discovered in our studies of the past and present carbon cycles to such a theory is a key objective. It requires learning how to translate molecular, genomic, and microbial metabolic information into an understanding of evolutionary feedbacks that can drive instability and mass extinctions. Collectively, this work amounts to the design and execution of a stress test of the carbon cycle system. Our studies of the modern carbon cycle will provide a base case. Theoretical models of carbon cycle dynamics will yield specific hypotheses for the conditions that determine its unstable evolution. These hypotheses will then be tested using geochemical signals derived from past extreme environmental events. That should provide an explicit understanding of the range of stability of the carbon cycle system and the potential for a sixth extinction.

How to Stress Test the Earth’s Carbon Cycle

The project’s ambitious scope requires multiple activities and skills, empirical and theoretical. The empirical work will include laboratory experiments to identify the microbial pathways and molecular mechanisms of slow respiration, along with the development of new methods to measure respiration rates in the lab and in the field; field studies of the modern carbon cycle to collect natural samples and test hypotheses; and field studies to collect rock samples containing the record of past events. These will then be followed by geochemical analyses of collected samples. The research will result in the development of a new theory of carbon cycle dynamics that will enable quantitative prediction of the risks of instability.

To perform these tasks, the project expects to need significant resources. Specifically, studies of the modern carbon cycle will require about 15 teams devoted to laboratory and field investigations. Analyses of past events will require about another 15 teams for sample acquisition and geochemical analyses. New theory and related modeling to motivate and support the entire effort will require an additional 10 teams. An average of $2.5 million a year for each team would result in a $1 billion, 10-year project. The outcome would be a fundamental understanding of carbon cycle dynamics, revolutionizing earth and environmental science and resulting in a comprehensive, objective evaluation of the long-term risks of modern environmental change. This is necessarily an extraordinary opportunity for enlightened philanthropy, since a project of this scope could not be funded from public resources.

A five-year project, in which half as many teams work with a budget of $1 million per year, would cost a total of $100 million. Such an effort would likely result in important new ideas, but the shorter time period and relatively limited budget would make difficult the definitive testing of their significance.