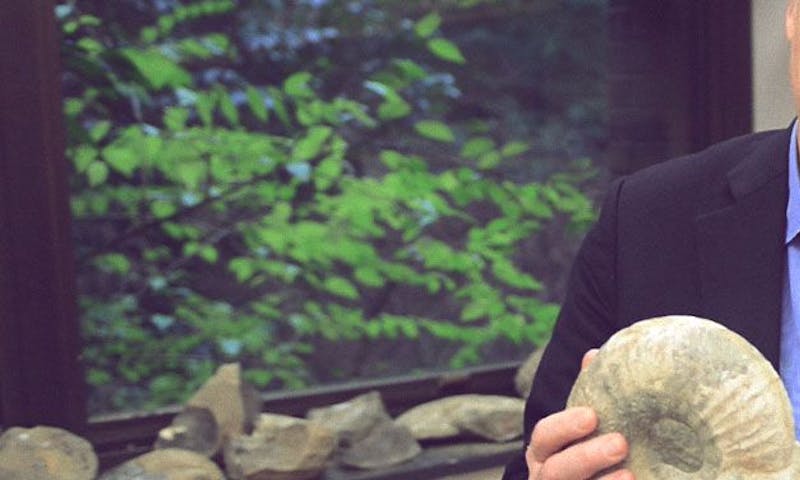 When you first meet Peter Ward he loves to say things like “See this beige baseball hat? It was dark brown until it faded under the thin ozone layer in Antarctica.” That’s his way of telling you that he recently returned from Earth’s southernmost continent, where he was excavating nautilus shells 70 million years old. He could go on for hours about his fossil hunts around the world. He tells you about the time he was searching for fossils from the Cretaceous-Paleogene extinction event, when an asteroid hit the Earth and wiped out the dinosaurs, at the base of a rocky cliff in Bidart, France, overlooking a beach of nude men. “It was surreal,” he says matter-of-factly. But Ward doesn’t brag about his life and adventures. The paleontologist and marine biologist just wants to inform you that life as a scientist is a nonstop adventure.

Ward, 63, is a professor of Biology and Earth and Space Sciences at the University of Washington, and a leading expert on the fabled mollusk that has cruised through the seas for half a billion years. His books include In Search of Nautilus, Rare Earth: Why Complex Life Is Uncommon in the Universe (with Donald Brownlee), and Under a Green Sky: Global Warming, the Mass Extinctions of the Past, and What They Can Tell Us About Our Future. He is also the first subject in our regular Nautilus feature, “Ingenious,” a video interview, which opens a door on the personal life of a scientist whose work helps define the topic of each issue—in this case, the extraordinary marine life and cultural legacy of the nautilus.

In conversation Ward is a boundless source of energy. Just as his fluffy brown spaniel, Sammy, bounds across the floor of Ward’s lab, where nautilus fossils fill haphazard shelves and cabinets, Ward has a tendency to ricochet across subjects: dinosaurs, neutron bombs, Jimmy Carter, Comet Hale-Bopp, species-jumping germs, climate change (“Humans are much better than volcanoes at putting CO2 in the atmosphere”). We asked him to talk, in particular, about what inspired him to study the nautilus, and how his research has shaped his life. He happily obliged. His accompanying essay, “Nautilus and Me,” ventures further into the depths of his life, which at times reads like a cross between Jacques Cousteau and Hunter Thompson. So without further ado, meet Peter Ward.