The silver screen. Movie screenings. The big and small screens.

Ever since 1879, when Eadweard Muybridge used the world’s first movie projector to display a loop of 13 images of a galloping horse, the preferred place to show motion pictures has been on a single, dedicated, approximately flat screen. The main reason is obvious: A flat surface doesn’t change the geometry of the projected image, making it easier to faithfully recreate images recorded by a movie camera.

But there are also clear disadvantages to confining movies to flat screens—chiefly, that it segregates them from the vast majority of shapes, surfaces, and objects in the world around us. With that in mind, a number of engineers have developed ways to project moving images onto surfaces that are parts of our lives and communities, namely, buildings. The rapidly improving technique is generally known as projection mapping, or sometimes as spatial augmented reality, emphasizing its connection to the real world.

Some of the most sophisticated work comes from a company called Obscura Digital, which has developed a knack for projecting video onto huge, distinctive buildings, using each one’s particular architecture as a unique canvas. 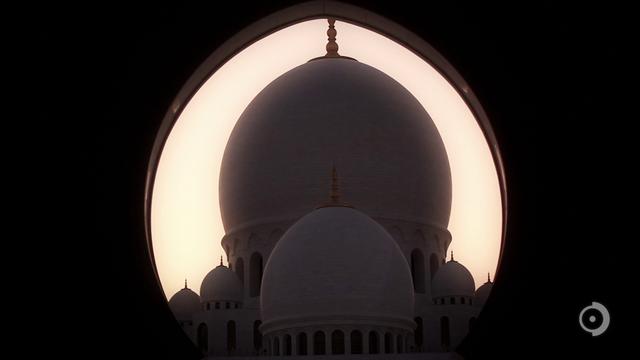 For Obscura’s project at the Sheikh Zayed Grand Mosque in Abu Dhabi, United Arab Emirates (above), they first used a laser scanner to digitize the building, detecting the shape and size of everything on it, including four minarets, 12 domes, rows of columns, and wall upon wall with tiny, hand-carved details. That produced a cloud of innumerable points, which had to be converted into a simplified 3D “mesh” that was easier for their computers to handle.

Then came the hard part: figuring out how to warp the digital Islamic-style art they created so that when it was projected on the complicated shapes of the mosque, it would be warped back to its intended appearance. The company used a graphics program called TouchDesigner, a popular choice for these kinds of jobs. The actual images were produced by 49 projectors, which covered surfaces on the mosque equivalent to 600 feet by 351 feet, or about four times the area of a football field.

The company’s other work involves different challenges. To project images on the Western Sails of the world-famous Sydney Opera House, they set up 14 projectors, fitted with specialized long-range optics, nearly half a mile across the water. 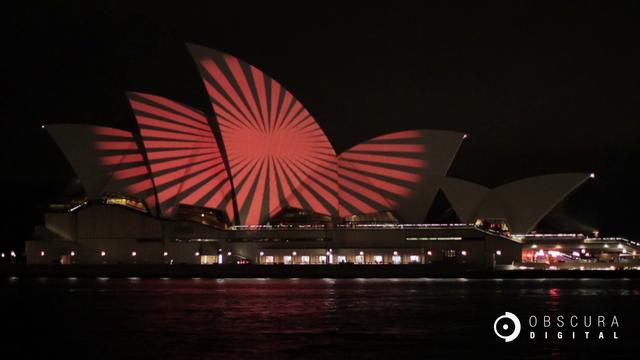 New York’s Guggenheim Museum, an icon of modernist architecture, required wraparound, 360-degree projections inside (taking care not to project onto museum-goers standing just next to the illuminated surfaces), in addition to similar displays on the exterior. 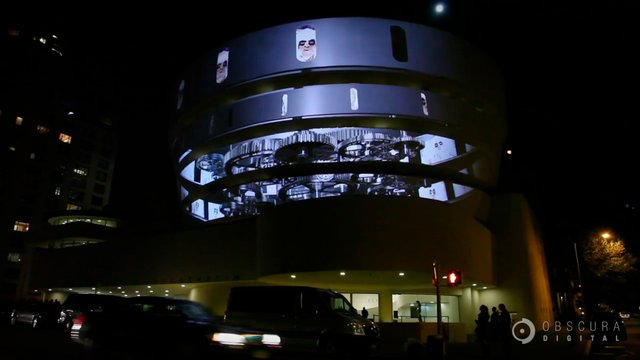 At the Danish National Library, Obscura created a “projector tree”: 20 video projectors covering a complicated web of balconies and walls.

Considering the complexity involved with doing these huge projection-mapping jobs, you can understand why almost everyone since Muybridge has opted to use a flat projection screen. But seeing the results, we can be glad that some screens have broken out of the limits of two dimensions.