How visualizations deepen our understanding. 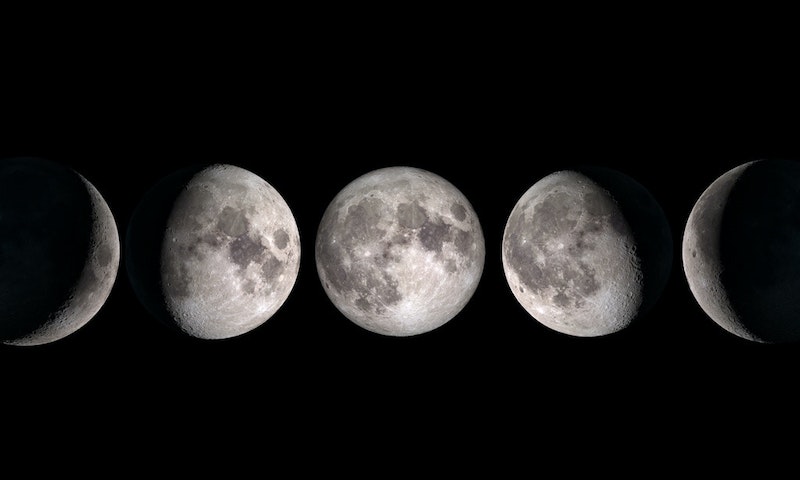 We cannot be sure who first explained the existence and succession of the moon’s phases in this way. However, we do know that the Greek philosopher Anaxagoras (~500–428 B.C.) was the first to leave a written record suggesting important aspects of this explanation. Anaxagoras was a native of Clazomenae, a city of Greek speakers in the middle of the west coast of Asia Minor, now Turkey. Anaxagoras spent 20 to 30 years of his mature life in Athens and so witnessed firsthand the beginning of the Peloponnesian War and other stirring events and impressive achievements of fifth-century B.C. Athens. His time in Athens must have overlapped the lives of near-contemporary Athenian tragic playwrights Sophocles and Euripides and the life of the younger Socrates (469–399 B.C.).

We do know that Anaxagoras wrote books because Socrates claimed to have read one of them, though he did not like it very much. Today we have only a few fragments of Anaxagoras’s writing preserved as quotations in other ancient texts. “The Sun puts the shine in the Moon” is one of these fragments. Later commentators, Aetius and Plutarch, writing four and five centuries after Anaxagoras claimed that Anaxagoras was the first to clearly explain the cause of the moon’s phases. Diogenes Laertius, who flourished in the third century A.D., also claimed that Anaxagoras was the first to put a diagram in a book. If Anaxagoras did, indeed, explain the phases of the moon with a diagram, I suspect his diagram looked much like figure 5.

Anaxagoras is best known for his creative cosmology, that is, for his way of explaining everything. Anaxagoras’s first cosmological principle was that the mind directs and orders all things. Anaxagoras spoke of mind so often that his contemporaries gave him the nickname Nous, the Greek word for mind, just as today we might, with a little sarcasm, call someone a “brain.” It was Anaxagoras’s failure to follow through with the idea of Mind that so disappointed Socrates. Instead of explaining phenomena in terms of creation for some purpose as a mindful person might create, that is, for the sake of being beautiful or useful, Anaxagoras, in fact, often resorted exclusively to material and mechanical causes. One such materialistic idea, that the sun and all the stars are simply fiery pieces of metal, led to his conviction for impiety and banishment from Athens.

The air that surrounds us is invisible, odorless, and tasteless. Nor does it usually produce sound or resist our movement through it. Of course, sometimes we feel a breeze at our back or a wind in our face. Less frequently tornadoes obliterate solid buildings and gale force winds raise seas that put neighborhoods under water. No doubt our ancestors had been aware of these phenomena for millennia when Empedocles (490–430 B.C.), a native of Acragas in Sicily, sought to explain them. He was one of several physically minded, Greek-speaking philosophers or cosmologists who sought the principles or, in Empedocles’s usage, the roots of all phenomena.

For Thales the single principle was water, presumably, because of its ubiquity and because under common conditions water exists in three different phases: solid, liquid, and gas. For the Pythagoreans the single principle was number. For Anaximenes (ca. 500 B.C.) it was air. For Heraclitus (ca. 495 B.C.) it was fire. In a surviving fragment, Heraclitus suggests that while the logos (or the account) abides, there is no permanent material thing, since, accordingly to Heraclitus, “You cannot step twice into the same river, for other waters and yet others go ever flowing on.”

We can see the fire under the pot, but not the air the fire consumes.

Empedocles sought to explain both the variableness and the stability of our experience by postulating that everything is composed of just four elements: earth, air, fire, and water. According to Empedocles, these four elements are neither created nor destroyed. The mixture and separation of different quantities of earth, air, fire, and water, brought about by the agencies of love and strife, account for the world of change we experience. Much later Empedocles’s four elements became the basis of Aristotelian and medieval cosmology.

What prompted Empedocles to consider air as one of the four fundamental elements? Air is a peculiar choice for, unlike earth, fire, and water, air seems bereft of qualities. For instance, we can see the water vapor above a boiling pot, but not the air that supports that vapor. Likewise, we can see the fire under the pot, but not the air the fire consumes. One fragment of Empedocles’s poem On Nature, out of the several hundred of its lines that survive, suggests an answer to this question. In describing human respiration, Empedocles compares the pores in our lungs and in our skin with a clepsydra—the main part of an ancient water clock that, in turn, is an open-mouthed jar that can be drained through a small spout at the center of its bottom. He writes: “As when a young girl, playing with a clepsydra of shining bronze, puts the passage of the pipe against her pretty hand and dunks it into the delicate body of silvery water, no liquid enters the vessel, but the bulk of air, pressing from inside on the close-set holes, keeps it out until she uncovers the compressed stream. But then when the air is leaving the water duly enters.”

Figure 6 illustrates the phenomenon Empedocles observed. According to the poem, the young girl inverts the clepsydra, closes its spout or pipe with her finger (here replaced with a plug), and submerges its open mouth into “the delicate body of silvery water.” Interestingly, something prevents the water from rising and assuming the same level inside the clepsydra as outside. That something is air. For when the child lifts her finger, its seal with the pipe is broken, air rushes through the pipe, and the water below the clypsedra pushes upward. If we have ever doubted the substantiality of air, this little demonstration, which can be reproduced with a kitchen funnel and a sink full of water, should dispel our doubt.

Thales, Anaxagoras, Empedocles, and the other Greek philosophers predating Socrates were imaginative and, for the most part, materialistically minded thinkers who sought to explain phenomena with the fewest, self-consistent, and most plausible principles. While these cosmologists appealed to common observations (for instance, that water exists in three phases), their tools of discovery and verification were invariably speculation and argument. They did not perform experiments. But one wonders: Could Empedocles have resisted imitating the child he observed? Did he not also play with the clepsydra? If so, Empedocles did something unusual for a Greek of his time. He not only thought about nature, but manipulated a natural phenomenon with the intention of learning something new. He performed an experiment.

Have you ever heard someone say “Eventually scientists will figure out how to do it?” You fill in the reference for “it.” Travel faster than the speed of light? Build a heat engine with 100 percent efficiency? Extract energy from the cosmic microwave background? Indeed, it may be that some things once thought impossible will turn out to be quite possible. But it is not true that everything of which we might dream is possible. After all, we live in a world that has a nature: a characteristic way of being and of becoming, of remaining the same and of changing.

We may learn about that nature and discover ways to employ it, but we have no power to change the nature of things. According to Francis Bacon (1561–1626), “Nature, to be commanded, must be obeyed.” Aristotle (384–321 B.C.) transmitted to us this indispensable concept of nature—a concept rejected, perhaps unintentionally, by those who think scientists and engineers can do anything and everything.

The word nature comes to us from a Latin root, the Greek equivalent of which is φύσις or phusis, from which also derives physics. Of course, modern physics was born struggling against certain Aristotelian ideas. Nevertheless, Aristotle’s concept of nature is the bedrock upon which the practice of modern physics stands.

Figure 7 illustrates Aristotle’s universe—not as one would observe it—but rather in the state of perfection toward which Aristotle’s universe tends by virtue of its nature. Earth and water move down toward the center—earth more persistently than water. Air and fire move up away from the center—fire more readily than air. Thus upward and downward motions characterize the region below the sphere of the moon. Objects above the lunar sphere are composed of a fifth substance, the quintessence or ether. The sun and wandering stars or planets (not shown in the diagram) and the fixed stars reside on transparent spheres that carry them around the earth in concentric circles. Circular motion characterizes the region above the sphere of the moon.

Aristotle borrowed many of the features of his universe from his pre-Socratic predecessors, for instance, the four elements (earth, air, fire, and water) and the celestial spheres. Furthermore, the pre-Socratics were the first to formulate the concept of nature. But Aristotle composed these ideas into an ordered whole, a cosmos, that answered the questions of his day and, at the same time, remained consistent with commonplace observations.

Aristotle’s concept of nature is the bedrock upon which the practice of modern physics stands.

That last statement needs to be qualified for Aristotle must have observed sublunary objects that do not always travel up or down. Toss a clod of earth, and it travels along an approximately parabolic arc, at first up, then down, and always in the direction thrown. According to Aristotle, motion requires a mover and, if that mover is not the nature of the moving object, motion must be imparted and maintained externally, that is, unnaturally or by “violence.” Thus, it is the hand that throws the clod and the air through which the clod moves that cause its unnatural horizontal movement.

According to this view, to manipulate objects and study their behavior, that is, to perform experiments, is not a reliable way to study nature. For in doing so, one fruitlessly studies that which has no nature: the whimsy of the human boy, for instance, that tossed the clod in a particular way. To manipulate a natural phenomenon, is to spoil its naturalness—at least according to Aristotle.

Nevertheless, Aristotle was a great observer of nature and, according to the eminent historian of science George Sarton, “one of the greatest philosophers and scientists of all times.” He discovered the law of the lever and was the first to systematically study meteorology. He “carried on immense botanical, zoological, and anatomical investigations [and] clearly recognized the fundamental problems of biology: sex, heredity, nutrition, growth, and adaptation.” He structured the elements of logic and originated the inductive method. Aristotle also wrote ageless treatises on literary criticism, ethics, and metaphysics. Indeed, there is hardly a branch of human knowledge to which Aristotle did not contribute.

In 335 B.C. Aristotle established a school of philosophy and science in Athens called the Lyceum. Those who studied with and followed Aristotle became known as peripatetics, that is, those who study while walking from place to place. Aristotle’s most famous pupil, Alexander the Great, the son of Phillip II of Macedon, conquered the known world.

According to Aristotle, the realm of the celestial spheres is perfect. Its motions, unlike those of the sublunary realm, are completely natural, manifestly beautiful, and ultimately caused only by the desire for the good. It is not hard to see why Aristotle’s view of the universe has influenced thought and literature for over 2,000 years. It is, after all, a privilege and delight to look at the heavens each night and be inspired by their perfection.

From Drawing Physics by Don S. Lemons, published by the MIT Press. 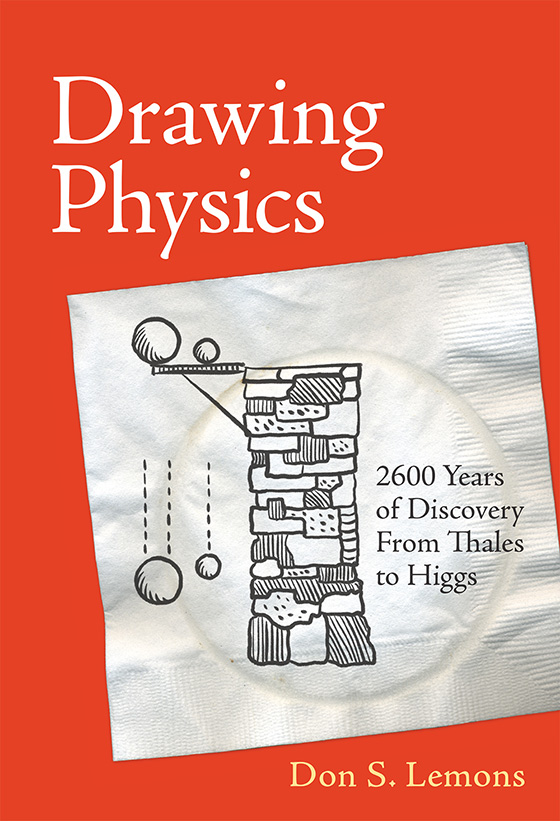