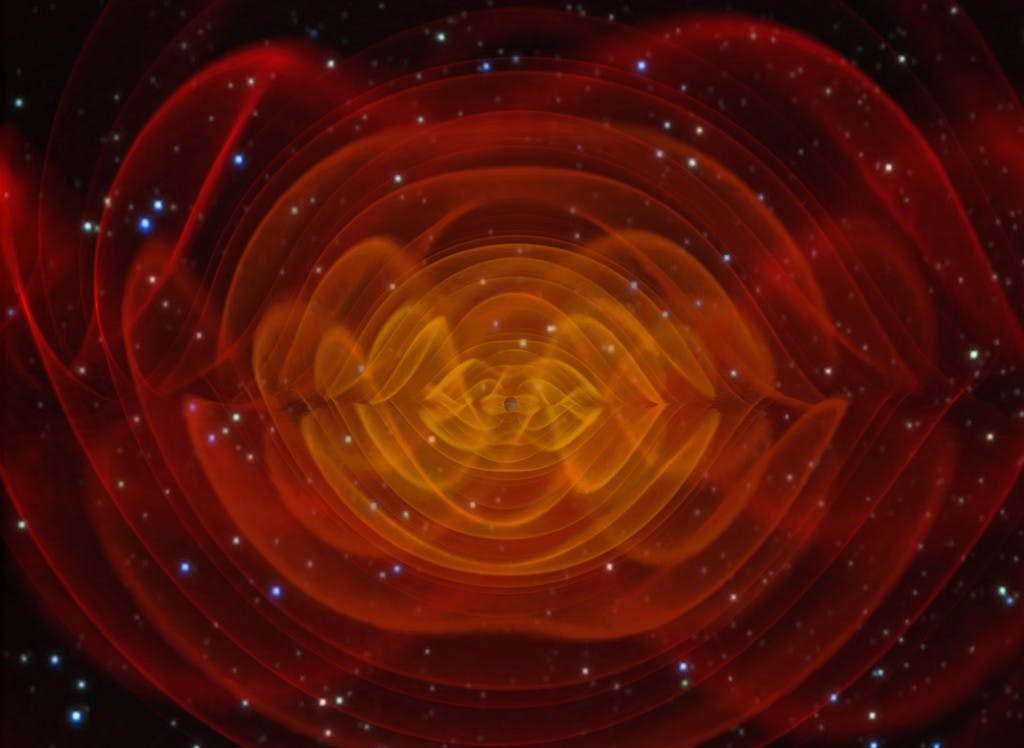 Gravitational waves are finding their way to the general public. There is massive television news coverage with never a doubt expressed; gravitational waves have simply “been detected”—exciting but no more dubious than, say, the moon landing. What is happening is that gravitational waves are being “domesticated” in the same way as black holes or the Higgs have been domesticated. Everyone knows what a black hole is—it is a feature of everyone’s day-to-day life embedded in a “semantic net” that includes “the cosmos,” “the big bang,” “Stephen Hawking,” “brilliant scientists,” “Einstein,” “space,” “alternative universes,” “time travel,” “worm-holes,” “astronomy,” “rockets,” and “being sucked into things”—and this is in spite of the fact that, before The Event, no black hole had been observed except by inference. As for the Higgs, everyone knows that it was found by the huge and brilliant team at CERN, but, familiar as it is, no one knows what it is. I know it is the last piece in the jigsaw puzzle of the particle “zoo” known as the standard model, but what I have is “beer-mat knowledge,” good for answering questions in Trivial Pursuit but that’s about it. On the other hand, the fact that we can imagine encountering questions about black holes and the Higgs while playing Trivial Pursuit is one of the things that makes them real: all this familiar knowledge makes stuff real. The moon landing, note, is pretty real for everyone but, just as in the case of what is building in respect of The Event, there are conspiracy theories about that too; and, just as in this case, you have to stray from the mainstream to find them.

On Friday I gather a good selection of the United Kingdom print newspapers; they are big contributors to the domestication process. The Guardian is a broadsheet for the left-liberal middle classes and its news section is 38 pages long. It gives the story the lead and whole of page 11. It had also given it the whole of page 3 on Wednesday, building the story on the rumors. On Saturday, The Guardian’s regular political cartoon features the Syrian peace talks represented as some kind of funny-looking celestial object with the caption: “Not gravitational waving but gravitational drowning.” Thus do gravitational waves spread into the ordinary language.

The Independent has a similar readership to The Guardian but has a smaller tabloid format with 72 pages. It gives the story the entire page 1 and pages 6–8; it opines that this is “one of the greatest achievements in human history.”

The Telegraph is another broadsheet, with 38 pages in its news section. It is a right-wing, patriotic paper for the educated. It makes gravitational waves the second story on page 1, leading with:

A British scientist who was pivotal in the project to detect gravitational waves could not celebrate the momentous discovery with colleagues because he is suffering from dementia.

This, of course, is Ron Drever. The paper also gives up pages 10 and 11 to the story.

Martin Rees, the Astronomer Royal, writes columns in The Independent and the Telegraph. He opines that this is of similar importance to the discovery of the Higgs; most other commentators say it is much more important than the Higgs, but Rees has long been said by gravitational wave physicists to be less than enthusiastic about the enterprise.

The Daily Mail is a “little Englander” tabloid with 92 pages serving those with strong right-wing opinions. It gives the story half of page 10, mistakenly claiming that Einstein predicted that colliding stars would generate gravitational waves that could be detected on Earth, whereas he actually thought they would remain completely undetectable.

The Mirror is a left-leaning tabloid with 80 pages. It gives the story most of page 21 but says that LIGO was invented by Thorne and Weiss, missing out on Drever.

The Sun is a tabloid with 60 pages that began its life by publishing photographs of topless models on the notorious “page 3” (now dropped). The only science I could find was on the bottom third of page 15, head-lined: “Top Prof Dies in Rubber Suit with Dog Lead Round Neck.” The “Top Prof” does not seem to have been one of the gravitational wave team.

The Guardian website of February 12 includes a hilarious cartoon—one of a series called “First Dog on the Moon,” which anticipates one of my major sociological theses. The fourth panel of the cartoon opines:

Obviously we can’t see these waves—the only way we know they are real is by using another extremely sensitive device which detects scientists having feelings of excitement.

The excitement evoked in scientists by a gravitational wave is calibrated using the marginally smaller effect of a cheese salad sandwich as a standard candle.

A member of the LIGO team has put together a collection of newspaper front pages from around the world. And, as though to put an indelible stamp on the soon to be taken for granted nature of this exotic phenomenon, in the United States the discovery is presented on Saturday Night Live and The Tonight Show, and, on Saturday, February 13, the humorous U.S. radio show A Prairie Home Companion devotes about five minutes to gravitational waves. Gravitational waves have arrived!

The physicists continue to do my job for me by gathering more indications of the domestication of gravitational waves. On February 16, a French (presumably humorous) website normalizes the waves in contemporary fashion by calling for a ban on them and the distribution of protective helmets. This is a Google translation from the French with my minor edits:

For a Moratorium on Gravitational Waves


Bringing together hundreds of independent researchers, the “Collective for a moratorium on gravitational waves” (COMOG) sent us this platform. We publish it verbatim in our columns:


In recent days, highlighting the “gravitational waves” continues to make the press headlines. Everyone welcomes this alleged “scientific breakthrough,” which was published in the Physical Review Letters, a journal under orders of the nuclear lobby.


Now, our collective, consisting of independent researchers who wish to remain anonymous for their own reasons, is concerned about the apparent toxicity of gravitational waves.


To date, there is in fact no serious study establishing the actual safety of these waves. That is why we propose an action plan of four points.


1. We recall, first, that the oscillations of the curvature of space-time can present health risks found, especially on the neurological system of employees too long exposed to the gravitational waves. It is appropriate in this case to call for the government to strictly enforce the Labour Code, to limit the time of exposure to gravitational waves, and equip the wage earners with protective helmets.

2. To these health risks are added, as often environmental, of deleterious economic effects. The curvature of space-time is likely to cause untoward inconvenience, especially in the field of transport and travel. An example: If space-time is curved in the wrong direction when one performs a trip from Paris to Bordeaux, the journey can last more than 25 hours, according to our estimates. Gravitational waves expose the French economy to serious danger that cannot be underestimated.


3. It appears that the production of gravitational waves calls for masses of matter and energy that are absolutely astounding: black holes, neutron stars, washing machines, etc. We ask that the environmental and climate impact of gravitational waves be measured in France by an independent body and a carbon footprint be determined as quickly as possible.


4. As a result, we ask Ségolène Royal, Minister of Environment, Energy and the Sea, responsible for international relations on the climate, to apply the constitutional principle of precaution, and to take by decree related measures that are defined and recommended in principle 15 of the Rio Declaration. It seems to us urgent that France decide on a moratorium on gravitational waves.

If the government does not abide by these basic precautions, peaceful COMOG teams will be forced to resort to direct action. Within six months, we will proceed to the systematic dismantling of gravitational wave antennas. Our teams of volunteer harvesters shall uproot the plants of space-time curvatures. Finally, we will not hesitate to leave Paris to set up a zone to defend Proxima Centauri, even against the advice of the prefect.


We call upon our fellow citizens to join our fight. Gravitational waves, no thank you!

Our HTSA column last week touched upon the subject of regional supporters groups and their recent cosmic rise in popularity. The Laser Interferometer Gravitational-Wave Observatory (LIGO) can probably demonstrate whether this is due to colliding Black Holes over Bexleyheath.

And Barack Obama had tweeted on February 11:

Einstein was right! Congrats to @NSF and @LIGO on detecting gravitational waves—a huge breakthrough in how we understand the universe.

At the forthcoming American Physical Society (APS) meeting, Dave Reitze, the director of LIGO, will present a slide showing a woman wearing a dress patterned with the waveform, an Australian competition swimmer with the waveform on his swim-cap, and a New York advertisement for apartments.

I attend two meetings in March: a general relativity 100th anniversary meeting at Caltech and the LIGO-Virgo collaboration meeting in Pasadena. Of course, the cat is now out of the bag so a big topic at the Caltech meeting is The Event. I follow Barry Barish onto the platform; he describes the technicalities and I talk about the way small science and big science had combined to create this possibility, with Barish bringing about the necessary transformation, and I talk about what it meant for me as a sociologist to be confronted by such a sudden and certain result. At neither meeting is there any criticism but the LVC is selling huge numbers of T-shirts and polo shirts with the waveform of The Event printed or embroidered on them: The waveform is becoming an icon! Many more such garments will be sold at the April APS meeting.

At the March meeting of the APS—a much larger meeting than the April meeting I am going to attend—a group of physicists who have nothing to do with LIGO or gravitational waves performed a song based on the Neil Diamond/Monkees’ “I’m a Believer.” The lyrics are as follows:


I thought waves of gravity were fairy tales—fine for dilettantes, but not for me.

What’s the use of searching?

Noise is all you’ll find.

I don’t want to clutter up my mind—

Weber tried to find them on the moon.

—Do you wonder I was disinclined?


The whole song can be seen and heard on YouTube.

What about social media? Google Trends (see chart above) shows the huge spike in interest in gravitational waves around the February 11 press conferences by tracking hits on Google. Unfortunately, we have only the normalized trend, the scale having a maximum of 100, not absolute numbers.

From Gravity’s Kiss by Harry Collins, published by the MIT Press.