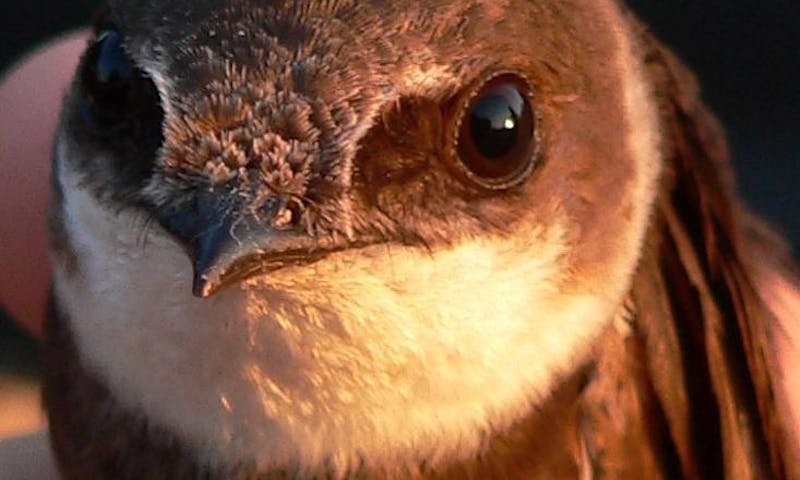 Humans have marvelous powers of recognition. No one’s surprised when parents identify their child in a crowd by a glimpse of her face or echo of her voice. But we aren’t unique in this regard. Other creatures have evolved impressive powers of discrimination.

Take birds. “Their recognition system is really quite remarkable,” says Mark Hauber, director of the animal behavior and conservation program at Hunter College. “It has to be. You have to find food, you have to escape from your enemies, and you have to make sure you don’t mate with your parents.” Calling someone “bird brain,” in short, is misguided.

Here are three birds with stunning abilities of recognition.

Hauber designed an experiment to determine whether warblers need to compare a foreign egg with their own to identify and kick out the fraud. He simulated foreign eggs in the warbler nests with highlighters—blue, green, yellow, red, and orange—to change the color of the warblers’ real eggs to more varied hues. Sometimes just one egg was artificially colored, sometimes three, sometimes all of them.

The study, published in Behavioral Ecology, suggests the warblers recognize the imposters before long. When just one egg was orange, the warbler kicked it out around 75 percent of the time. When all the eggs—five—were orange, the warbler kicked at least one of the eggs out over half the time; sometimes it kicked out all of them. That means that it wasn’t comparing the orange eggs to anything else. Warblers seem to know what their eggs should look like, even when they had all been altered in the same way.

It’s not about good eyesight or intelligence. A bird like a black-capped chickadee, which isn’t usually an unwitting host of a parasitic bird, doesn’t have that foreign-egg recognition skill because they never had the need to develop it, Hauber says. “It’s something about the cognitive architecture that has evolved to respond to these foreign eggs.”

Bank swallows live in large colonies that can contain hundreds of pairs of birds, all living in their own nests. Once the baby birds start flying around, they sometimes fly back into the wrong nest. How do the parents recognize their own offspring when those of other bird parents look so alike? It turns out that bank swallows can identify their young by the calls they make.

Michael Beecher, a bird researcher and professor of psychology and biology at the University of Washington, along with his wife and a graduate student, tested bank swallow recognition abilities by taking the babies out of their nest. Then, they put speakers on either side of it. One speaker would play the recorded sound of the removed babies, and the other would play the sounds of foreign ones. “The parents will go to the nest that’s playing the calls of their chicks,” Beecher says. “If you live in these huge colonies, and that’s your evolutionary background, you sure as heck better be able to recognize your kids—you can’t rely on just the nest they’re in.” The same is true for cliff swallows, which also live in large colonies.

But not all swallow species live in big groups. Barn swallows and rough-winged swallows live in single pairs or much smaller groups, so it’s less likely that their babies would land in the wrong nest. When Beecher performed a similar speaker experiment with the barn swallows, they didn’t necessarily go to the speaker that was playing the sound of their own babies. It’s not that the barn swallows are bad at listening or recognizing; it’s that the baby bank and cliff swallow calls are more complex, Beecher says—there’s more information in them than in the barn swallow calls. The signal coming from the baby evolved to be more distinct in large groups.

Zebra finches are small songbirds, native to Australia and adept at dealing with difficult, uncertain environments. They also pair for life—with either gender. A 2014 study by Elizabeth Adkins-Regan, a neurobiologist at Cornell University, and Sunayana Banerjee, who was a PhD student at the time the research was conducted, showed that how the males are raised can affect whether they go with a male or female.

The two scientists had 21 zebra finches raised by just fathers. (The baby birds could see other adult females nearby when they were young, but the females had no hand, or wing, in rearing them.) Later, when the birds began to compete for mates, 12 of the motherless male finches paired with other males, four paired with females, and five didn’t pair at all. “They were directing their songs at other males instead of the females,” says Adkins-Regan, referring to the mother-deprived birds. None of the motherless female birds ended up pairing with other females.

Control birds—raised by a male and female parent—on the other hand, paired with a bird of the opposite sex. The most probable explanation, says Adkins-Regan, has to do with sexual imprinting: the idea that birds imprint on the parent of the opposite sex, which can then influence their mate choice. Male birds, without mothers to imprint on, imprinted on their fathers, and then sought out male mates.

You might assume non-human animals choose partners of the opposite sex by instinct, but it’s important to recognize the nurture side of the equation too. “In a socially complicated bird like a zebra finch, there almost always turns out to be some kind of experience or learning component to these things,” says Adkins-Regan. “Sexual imprinting is a very special kind of learning, but it is a kind of learning. This isn’t just an automatic instinct.”

Rob Verger, a journalist and a graduate of Columbia Journalism School, focuses on science and health and has written for publications such as VICE News, The Daily Beast, The Boston Globe, and Newsweek, where he was on staff for nearly four years. Follow him on Twitter at @robverger.