How to Teach Science with Sugar and Cream

High school teachers are bringing ice cream into the lab. 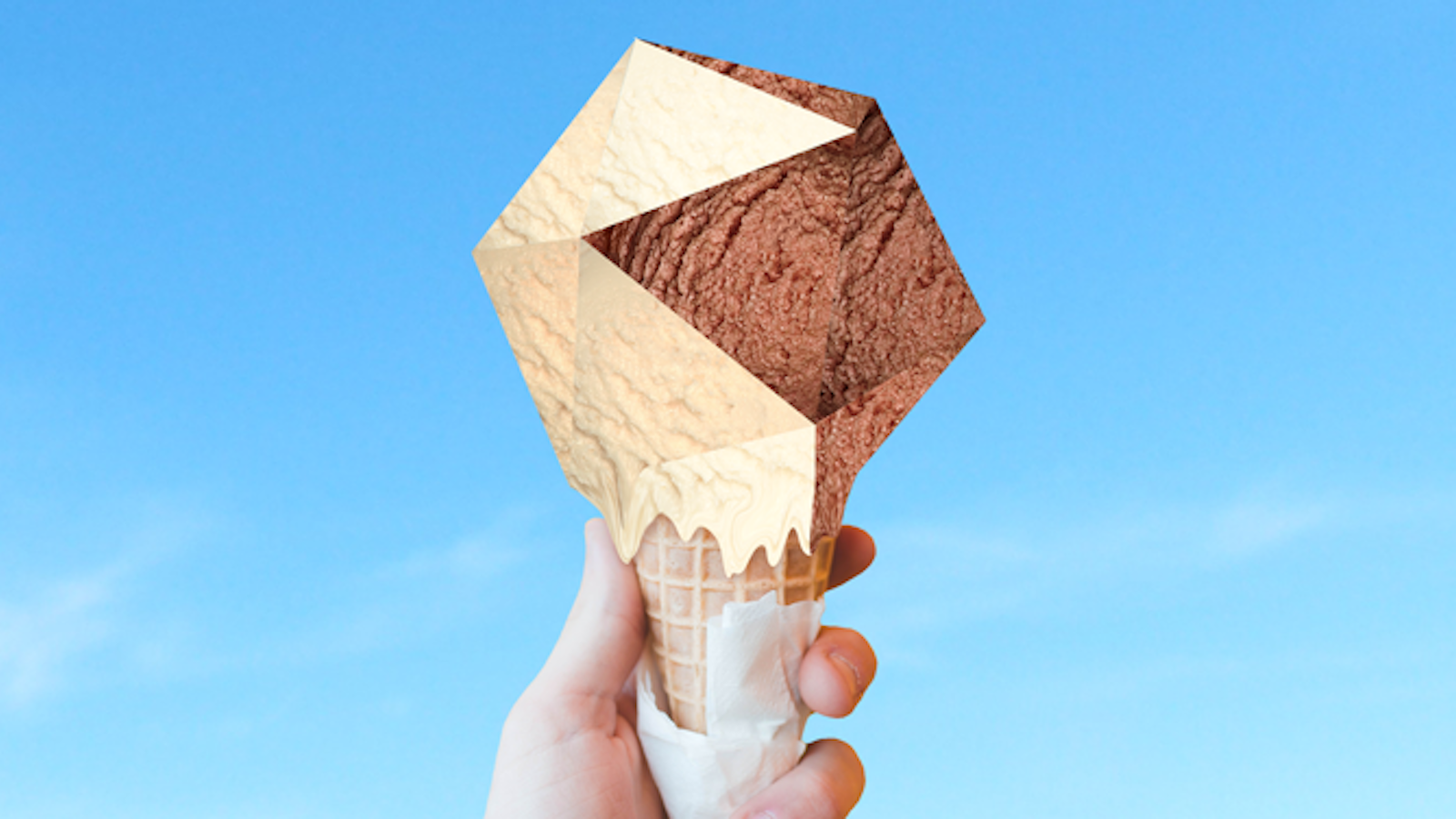 During July’s heat wave, as the Larsen C iceberg began its ocean journey, an ice cream “support session” convened in Manhattan. A classroom of high school teachers were shakin’ it like a Polaroid picture, investigating how a vigorous agitation of ice and salt, cream and sugar could be used to teach math and science, and beyond. The workshop was part of “Summer Think,” a three-day conference gathering 100 master teachers at the headquarters of the non-profit Math for America, in midtown (founded by the mathematician, quantitative investor, and billionaire James Simons, Math for America annually awards $15 million for New York City teaching fellowships, and this fall announced an investment totaling nearly a quarter of a billion dollars over the course of a decade).

The Summer Think itinerary also included, among other sessions, a deep-dive on “Climate Justice;” and “Winning Hearts and Minds,” which produced an “Adolescent Survival Guide” (for teachers) based in part on year-end interviews wherein one student described high school as, “a place where teens are deprived [of] half of their lives.” Ice cream is always a reliable antidote; 918,643 million gallons were produced in America last year (an increase of more than 5 percent since 2014; understandably, all things considered).

Chemistry teachers Rachel Jun from Columbia Secondary School, and Laryssa Kramarchuk from Frank McCourt High School, led the ice-cream support session, drawing from an elective course designed by Kramarchuk called, “What’s Cooking?”—determining the heat index of chili peppers, using a laser-gun thermometer pointed into mouths before and after taste tests; and observing the chemistry of fermentation in a root beer lab. “It’s a non-linear approach to teaching,” said Kramarchuk. Students design their own experiments, following their curiosity and whatever line of inquiry strikes their fancy—an engaging process that serves as something of an elixir in countering math and science anxiety. Kramarchuk cautioned, however, that with this more dynamic rubric, teachers, too, must embrace the unknown. “I was really scared,” she told her colleagues. “I had to let go of the need to know everything. There are times when I tell my students, ‘I don’t know all the answers. Let’s talk about it together, let’s investigate and figure it out. That’s science.’ ”

As a scientific control, of sorts, the teachers testing the ice-cream unit worked from this basic recipe:

In a large Ziploc bag, combine:

In a small Ziploc bag, combine:

Place the small bag inside the large bag. Seal both tightly. Cue up OutKast and, “Shake it, sh-shake it,” shake it for about 10 minutes. “If you get frustrated, that’s a great thing,” said Kramarchuk. “Frustration means you’re learning.”

Two of the standard teachable moments are “solubility” and “freezing point depression.” In freezing, “we make it possible to taste the birth of creaminess,” the tantalizing transition from fluidity to solidity, as Harold McGee described in, On Food and Cooking, The Science and Lore of the Kitchen (one of the course reference texts). Writing the first edition, back in the early 1980s when canola oil was a novelty, McGee justified his seemingly trivial topic in the introduction by summoning Plato, who was among the first to suggest that food deserves serious scientific study. In Gorgias, Socrates dines with sophists and remarks that cookery, then merely and “exclusively devoted to cultivating pleasure,” would benefit from the approach taken by medicine, which, having “investigated the nature of the subject it treats,” ascended to a true art. And so it was with the evolution of ice cream (double scoop of “bourbon butternut squash,” and “stuffing,” anyone?!). Straight cream when frozen is rock hard. Adding sugar, a solute, makes it softer; sugar prevents orderly ice-crystal bonds, and also depresses the cream’s freezing point, so it won’t solidify in a bath of straight ice. “What made ice cream possible,” McGee explained, “was a sprinkling of chemical ingenuity,” known in the 13th-century Arab world, then Italy in the early 17th, and England with the court of Charles II in 1672: “If salts are added to the ice, the salts dissolve in the slush, lower its freezing point, and allow it to get cold enough to freeze the sugared cream.”

“It’s a non-linear approach to teaching.”

In the classroom, four teams of workshop attendees diligently shook-shook-shook, with Taylor Swift: “Baby, I’m just gonna shake, shake, shake …” They paused every minute, as instructed, to measure the temperature of the slush. “I’m getting really excited for the data,” Kramarchuk said. Depending on the amount of sugar, the bonds of ice cream form at about 26.6 degrees Fahrenheit, though each team changed things up with an independent variable—a different type milk, or sugar, or salt (magnesium chloride, for example), catalyzing different results. The magic can be summed up with an infamous mnemonic device from chemistry class. “Remember BARF?” Kramarchuk asked—Break bonds, Absorb energy, Release energy, Form bonds.

This ice cream experiment is mostly all about stoichiometry, the mathematics of chemical reactions, which makes use of algebra and geometry. But, following the slippery slope of curiosity, calculus—the mathematical study of continuous change—could also come into play, with this universal problem that needs solving: Why is it that you must immediately start licking an ice cream cone in earnest to prevent it from dripping profusely, yet once half the scoop is consumed, you no longer suffer so much dripping? The answer, according to the Math for America master teacher Andrew Wille, who taught a pre-calculus crash course this past summer for rising seniors at Brooklyn Technical High School, can be found in relating the rate of change of the radius to the volume of melting ice cream at any given moment. “If you assume that the ice cream is melting on its surface, it is reasonable to assume that the radius is decreasing at a constant rate. If so, you get much bigger changes in volume for larger radii than smaller radii, about 12 times the radius squared,” he said. “Therefore, much more ice cream is melting at the beginning when the radius is bigger than near the end when the radius is smaller.”

There would also be opportunity for more abstract lines of investigation. A recent paper submitted to Optimization: A Journal of Mathematical Programming explores conic optimization with theorems on various “ice-cream constraint systems.” For some metaphysical research, there’s the experimental philosopher Jonathon Keats’s recent invention: “anthropocenic sorbet,” an edible climate feedback model whereby data, encoded in flavors, are sensed by the alimentary canal and processed by the enteric nervous system, leading to a deeper understanding of the climate crisis—a “gut feeling.” More technically, Keats calls it “data gastronification.” Keats is pursuing this research both in the lab with a cognitive neuroscientist at Cornell and in an ice-cream truck on the streets of Los Angeles.

And then there could be inquiries into biology, because what is ice cream if not a memento mori—per Wallace Stevens’ poem, “The Emperor of Ice-Cream,” often cited by the author Stephen King. King told me that he first read the poem as a college sophomore, and regularly goes back to it—in ‘Salem’s Lot he called it “a poem about death.” “Pretty much has to be about death, don’t you think?” King asked. In the bedroom, a horny-footed corpse, cold and dumb, awaits her wake; in the kitchen, wenches busily whip up concupiscent curds. “As for ice cream, it melts,” said King. “So do our lives. In the end, we all go beneath the sheet. The emperor of ice cream is King Death.” Paul Mariani, a poet and professor emeritus at Boston College (and Stevens’ most recent biographer), deems the poem … “chilling.” “Essentially, I tell my students that this is a carpe diem poem: You seize the day. The only emperor, the only thing worth worshipping, is pleasure, because death awaits.” He reckoned that Stevens’ inspiration originated with Hamlet, who tells Claudius: “Your worm is your only emperor for diet. We fat all creatures else to fat us, and we fat ourselves for maggots …”

Back in the classroom, with the 10-minute ice cream clock winding down, Kramarchuk kept a close eye on her smart watch—she wanted to make sure there was enough time for the all-important “share-out” of the results. By the time the Beatles were on rotation—“… Well, shake it up, baby, now (Shake it up, baby)”—solidity had decisively taken hold. Ice crystals formed in a matrix with the fatty cream, intermixing with air cells, making the final product easier to scoop. Despite the crude methodology, the results were reasonably tasty: cohesively creamy, not cloyingly sweet, with an occasional salty pop, which was caused by the permeability of the Ziploc’s low-density polyethylene plastic, at least according to some impromptu group hypothesizing. Kramarchuk, meanwhile, passed around chocolate syrup and sprinkles—extraneous variables to be sure, and why not. “Your fat king and your lean beggar is but variable service,” says Hamlet, “—two dishes, but to one table. That’s the end.”

Siobhan Roberts is the author of Genius at Play: The Curious Mind of John Horton Conway.  Her Nautilus essay, “An ‘Infinitely Rich’ Mathematician Turns 100,” appears in The Best Writing on Mathematics 2017.