Opening a New Window into the Universe 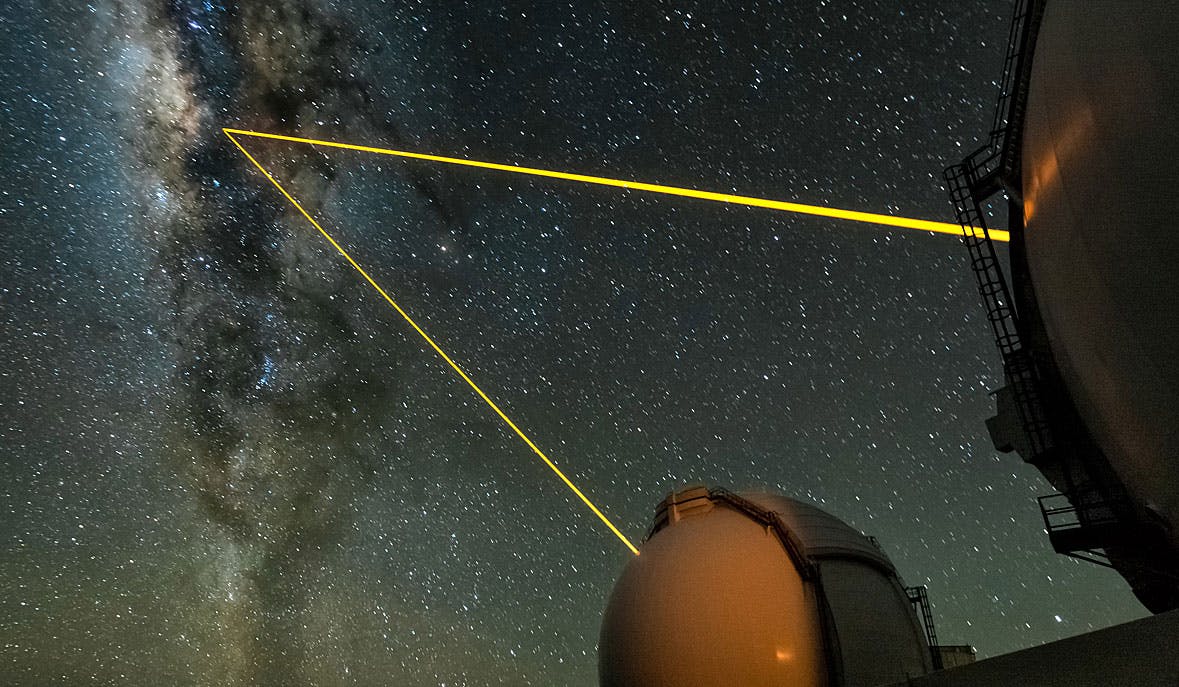 Earthbound telescopes see stars and other astronomical objects through a haze. The light waves they gather have traveled unimpeded through space for billions of years, only to be distorted in the last millisecond by the Earth’s turbulent atmosphere. That distortion is now even more important, because scientists are preparing to build the three largest telescopes on Earth, each with light-gathering surfaces of 20 to 40 meters across. In principle, the larger the telescope, the higher the resolution of astronomical images. In practice, the distorting veil of the atmosphere has always limited what can be achieved. Now, a rapidly evolving technology known as adaptive optics can strip away the veil and enable astronomers to take full advantage of current and future large telescopes. Indeed, adaptive optics is already making possible important discoveries and observations, including: the discovery of the supermassive black hole at the center of our galaxy, proving that such exotic objects exist; the first images and spectra of planetary systems around other stars; and high-resolution observations of galaxies forming in the early universe.

But adaptive optics has still not delivered its full scientific potential. Existing technology can only partially correct the atmospheric blurring and cannot provide any correction for large portions of the sky or for the majority of the objects astronomers want to study.

The project we propose here to fully exploit the potential of adaptive optics by taking the technology to the next level would boost research on a number of critical astrophysical questions, including:

In addition, it is clear that telescopes endowed with advanced adaptive optics technology will inspire a whole generation of astronomers to design and carry out a multitude of innovative research projects that were previously not possible.

The technology of adaptive optics is quite simple, in principle. First, astronomers measure the instantaneous turbulence in the atmosphere by looking at the light from a bright, known object—a “guide star”—or by using a laser tuned to make sodium atoms in a thin layer of the upper atmosphere fluoresce and glow as an artificial guide star. The turbulence measurements are used to compute (also instantaneously) the distortions that turbulence creates in the incoming light waves. Those distortions are then counteracted by rapidly morphing the surface of a deformable mirror in the telescope. Measurements and corrections are done hundreds of times per second—which is only possible with powerful computing capability, sophisticated opto-mechanical linkages, and a real-time control system. We know how to build these tools.

Of course, telescopes that operate above the atmosphere, such as the Hubble Space Telescope, don’t need adaptive optics. But both the Hubble and the coming next generation of space telescopes are small compared to the enormous earth-based telescopes now being planned. And for the kinds of research that require very high resolution, such as the topics mentioned above and many others, there is really no substitute for the light-gathering power of telescopes too huge to be put into space.

The next generation of adaptive optics could effectively take even the largest earth-bound telescopes “above the atmosphere” and make them truly amazing new windows on the universe. We know how to create this capability—the technology is in hand and the teams are assembled. It is time to put advanced adaptive optics to work.

Adaptive optics (AO) imaging technology is used to improve the performance of optical systems by correcting distortions on light waves that have traveled through a turbulent medium. The technology has revolutionized fields from ophthalmology and vision science to laser communications. In astronomy, AO uses sophisticated, deformable mirrors controlled by fast computers to correct, in real-time, the distortion caused by the turbulence of the Earth’s atmosphere. Telescopes equipped with AO are already producing sharper, clearer views of distant astronomical objects than had ever before been possible, even from space. But current AO systems only partially correct for the effects of atmospheric blurring, and only when telescopes are pointed in certain directions. The aim of Next Generation Adaptive Optics is to overcome these limitations and provide precise correction for atmospheric blurring anywhere in the sky.

One current limitation is the laser guide star that energizes sodium atoms in the upper atmosphere and causes them to glow as an artificial star used to measure the atmospheric distortions. This guide “star” is relatively close, only about 90 kilometers above the Earth’s surface, so the technique only probes a conical volume of the atmosphere above the telescope, and not the full cylinder of air through which genuine star light must pass to reach the telescope. Consequently, much of the distorting atmospheric structure is not measured. The next generation AO we propose will employ seven laser guide stars, providing full coverage of the entire cylindrical path travelled by light from the astronomical object being studied.

This technique can map the 3-D structure of the atmosphere, similar to how MRI medical imaging maps the human body. Simulations demonstrate that the resulting corrections will be excellent and stable, yielding revolutionary improvements in imaging. For example, the light from a star will be concentrated into a tiny area of the focal plane camera, and be far less spread out than it is with current systems, giving sharp, crisp images that show the finest detail possible.

This will be particularly important for existing large telescopes such as the W. M. Keck Observatory (WMKO)—currently the world’s leading AO platform in astronomy. Both our team—the UCLA Galactic Center Group (GCG)—and the WMKO staff have been deeply involved in the development of next generation AO systems.

The quantum leap in the quality of both imaging and spectroscopy that next generation AO can bring to the Keck telescopes will likely pave the way for advanced AO systems on telescopes around the globe. For the next generation of extremely large telescopes, however, these AO advances will be critical. This is because the cylindrical volume of atmosphere through which light must pass to reach the mirrors in such large telescopes is so broad that present AO techniques will not be able to provide satisfactory corrections. For that reason, next generation AO techniques are critical to the future of infrared astronomy, and eventually of optical astronomy as well.

The total proposed budget is $80 million over five years. The three major components necessary to take the leap in science capability include the laser guide star system, the adaptive optics system, and a powerful new science instrument, consisting of an infrared imager and an infrared spectrograph, that provides the observing capability to take advantage of the new adaptive optics system. This investment in adaptive optics will also help develop a strong workforce for other critical science and technology industries, as many students are actively recruited into industry positions in laser communications, bio-medical optics, big-data analytics for finance and business, image sensing and optics for government and defense applications, and the space industry. This investment will also help keep the U.S. in the scientific and technological lead. Well-funded European groups have recognized the power of AO and are developing competitive systems, though the next generation AO project described here will set an altogether new standard.

Federal funding agencies find the science case for this work compelling, but they have made clear that it is beyond present budgetary means. Therefore, this is an extraordinary opportunity for private philanthropy—for visionaries outside the government to help bring this ambitious breakthrough project to reality and open a new window into the universe.