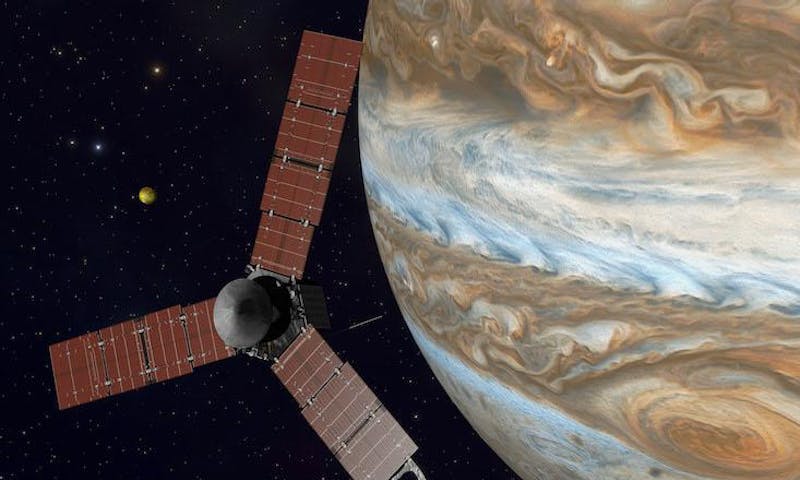 What would our solar system look like if an alien were to spot it from another planet, orbiting a distant star? How improbable would it appear? For the first time in human history, thanks to advances in exoplanet hunting, we can now answer that question. We can even put numbers on it. If that alien was 10 light-years away from us (in galactic terms, right next door) after a decade or two spent searching for planets orbiting our sun (with instruments similar to ours), this is what it would find:

Pretty sparse, isn’t it? No Earth or Mars. No rocky planets at all! No Saturn, no asteroid belt, no ice giants. All the aliens would detect is Jupiter. This is because the other solar system planets and objects are all either too far away from the sun, too small to detect, or both. The alien could pinpoint Jupiter’s mass and orbit with decent precision, because our star, the sun, would show a telltale wobble—the force of Jupiter’s gravity tugging on it as it orbits—but that’s all. It would just see a sun-Jupiter system.

But how common are sun-Jupiter systems in our galactic neighborhood? Such a system, as the term suggests, has at least one planet that’s so massive that the center of gravity between it and the star it orbits lies outside that star (the center of gravity between each of the other planets and the sun, in our solar system, lies within the sun’s radius). Is our sun-Jupiter pair anything like the norm?

Let’s start with the sun. It turns out that our home star is a little bit unusual, but not a lot. This image shows a census of all the stars within 30 light-years of the sun:

Our sun is a G star—normally white to yellow in color with a surface temperature around 5,000 to 6,000 Kelvin. There are 20 G stars within 30 light-years out of almost 400 total stars. The majority of stars are M stars, also known as “red dwarfs”. These small red stars have much longer lifetimes than G stars but shine much fainter. Among nearby stars, the sun is modestly weird. If you give our definition of a “sun-like” star some latitude, our star ends up being rare—10 percent of the nearby stars are like it, about the fraction of American adults who are vegetarian.

Now let’s turn our attention to Jupiter. First, take a look at our current census of extra-solar planets. Here is a plot of the almost 3,000 planets that have been discovered in the past two decades; the x-axis represents the planets’ distance from their home stars, the y-axis their mass:

Like the sun, Jupiters are just a little out of the ordinary. (As are our rocky planets: None of the known extra-solar planets line up with them, or with Saturn, Uranus, or Neptune. But we already knew this; it’s why we are searching for sun-Jupiter systems and not complete solar systems.) Only 10-15 percent of sun-like stars have a gas giant planet like Jupiter, with a mass larger than 50 Earths.

Another factor that makes our Jupiter more unusual is its orbit: It’s nearly circular (an ellipse with an eccentricity of just 5 percent) and it’s more than five times larger than Earth’s orbit. Among the other known gas giants, on the other hand, only about 10 percent have orbits wider than Mars’ (which is only 1.5 times larger than Earth’s) that are nearly circular (with eccentricities less than 10 percent). Putting those together, only about 1 percent of stars like the sun has a Jupiter like ours—a little less likely than being dealt 3-of-a-kind in a 5-card poker hand.

There is one more aspect of the solar system that is unusual. It’s not something about the planets that we have; it’s something that is missing. About half of all stars like the sun are orbited by at least one “hot super-Earth” planet. These planets are generally Earth-sized or larger, with orbits around the sun smaller than Mercury’s. We don’t know why the solar system is deficient in super-Earths, although one idea suggests that Jupiter may be the reason.

How exactly does the structure of a planetary system affect its ability to host life, if at all?

This tells us that about one in every 2000 stars in our galactic neighborhood is a sun-Jupiter system. Those are about the odds of being picked if you apply to NASA to be an astronaut. But what does this mean? It means the solar system is not a dime-a-dozen kind of planetary system even without considering that it harbors life. Most systems are different than ours. Most planetary systems orbit puny red dwarfs instead of big yellow G stars like the sun. Most systems contain super-Earths close to their stars, and if they happen to have a gas giant, it tends to be much closer to its sun, or have a much more stretched-out orbit than Jupiter’s.

But we don’t know how many sun-Jupiter systems also have Venuses, Earths, Saturns or Marses. And we don’t know how common Earths and Saturns are in systems without Jupiters or systems that orbit red dwarfs. We really want to know whether there is a reason for life-bearing planets to prefer sun-Jupiter systems, like ours. How exactly does the structure of a planetary system affect its ability to host life, if at all?

We are still looking for the answers to those questions. The Juno spacecraft, now in orbit around Jupiter, will likely shed some light on them. “Some of the answers undoubtedly lie in the general physics of gravitational systems, and in the intrinsic attraction of gases and particles that swirl around a baby star as it gathers itself up out of the chill soup of interstellar material,” writes astrobiologist Caleb Scharf in his 2014 book The Copernicus Complex. “But a big piece of the puzzle, a very big piece, seems to come from sheer, blind, unadulterated chance.”