Physicists Peer Inside a Fireball of Quantum Matter

Experimenters in Germany have glimpsed the kind of strange, non-atomic matter thought to fill the cores of merging neutron stars. 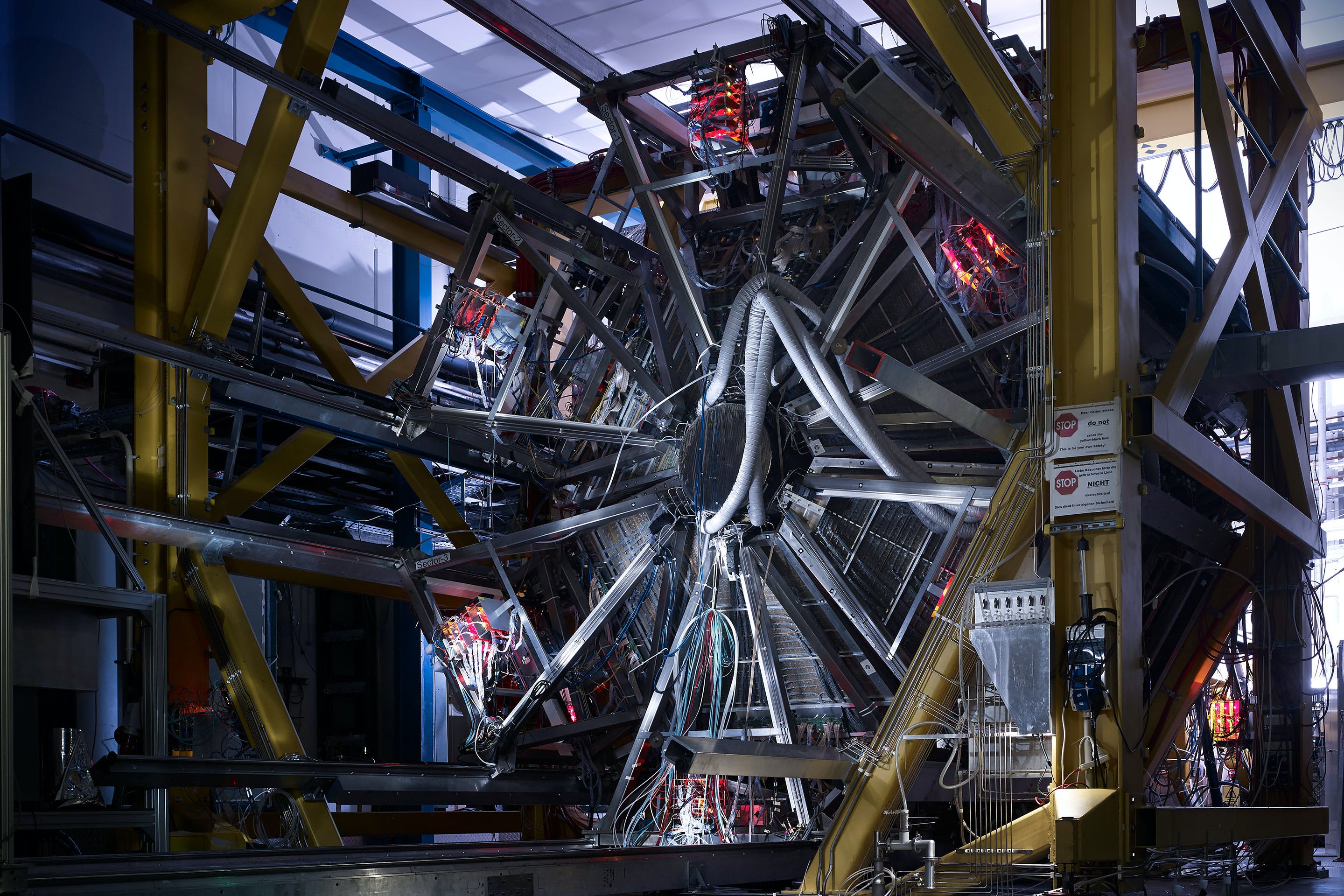 A gold wedding band will melt at around 1,000 degrees Celsius and vaporize at about 2,800 degrees, but these changes are just the beginning of what can happen to matter. Crank up the temperature to trillions of degrees, and particles deep inside the atoms start to shift into new, non-atomic configurations. Physicists seek to map out these exotic states—which probably occurred during the Big Bang, and are believed to arise in neutron star collisions and powerful cosmic ray impacts—for the insight they provide into the cosmos’s most intense moments.

Now an experiment in Germany called the High Acceptance DiElectron Spectrometer (HADES) has put a new point on that map.

For decades, experimentalists have used powerful colliders to crush gold and other atoms so tightly that the elementary particles inside their protons and neutrons, called quarks, start to tug on their new neighbors or (in other cases) fly free altogether. But because these phases of so-called “quark matter” are impenetrable to most particles, researchers have studied only their aftermath. Now, though, by detecting particles emitted by the collision’s fireball itself, the HADES collaboration has gotten a more direct glimpse of the kind of quark matter thought to fill the cores of merging neutron stars.

“It’s a point in a region where nobody else has touched as far as I know,” said Gene Van Buren, a physicist at the Relativistic Heavy Ion Collider (RHIC) in New York, which probes a higher-energy variety of quark matter called quark-gluon plasma. “That’s pretty exciting.”

Physicists have more or less understood how the strong nuclear force binds quarks together into composite particles such as protons and neutrons (each a triplet of quarks) since the 1970s. But the theory of the strong force, called quantum chromodynamics (QCD), is so complicated that no one has been able to predict exactly how matter will behave at high temperatures and densities. Theorists have developed a number of approximation schemes that are valid in certain situations, but large uncertainties make it hard to extend them. Experiments like HADES aim to manually fill the gaps left by the theory.

With the indirect method of probing quark matter, researchers wait until a fireball cools and its energy transforms into a mélange of particles—a point called “freeze-out.” They then infer the earlier temperature from the relative numbers of each particle type. But the particles birthed at freeze-out can’t tell us much about the fireball’s origins, so the HADES collaboration leveraged a different phenomenon: Almost as soon as the quark matter forms, it starts making short-lived composite particles called rho mesons, each composed of a quark and an antiquark. The rho mesons immediately transform into fleeting “virtual” photons, each of which splits into an electron and its antimatter twin, the positron. These particles carry information about the matter’s early moments all the way out to the HADES detector.

“There are no other observables that could really bring such rich information,” said Tetyana Galatyuk, one of the 200 members of the HADES collaboration.

The experiment, reported this week in Nature Physics, is the first to measure the temperature of quark matter under conditions akin to the inside of a neutron star collision, where most particles are matter (as opposed to antimatter). QCD approximation schemes falter in environments where antimatter and matter don’t exist in roughly equal quantities, so this zone remains a blank spot in the theory.

When neutron stars—the super-dense cores of dead stars—spiral together and collide, they shake the fabric of space-time and trigger explosions called kilonovas. To produce similar conditions, the team slammed gold atoms moving at nearly the speed of light into a gold target to create a jumble of hundreds of protons and neutrons so dense that the theory couldn’t conclusively predict what would happen. The resulting explosion was over in a flash, and electron-positron pairs piled up in the detector surrounding the crash site.

Protons and neutrons inside the fireball reached a density analogous to the effect of cramming New York City into a sugar cube.

When the researchers plotted the energies of these pairs (carefully discounting pairs known to come from particles other than rho mesons), they found that the energies formed an exponentially falling curve. If the electrons and positrons had originated from persistent rho particles with a characteristic energy or mass, there would have been a bump in the curve. Its smooth shape was an unmistakable sign that the matter had assumed an exotic form.

The slope of the curve clocked the fireball’s temperature at hundreds of thousands of times that of the sun’s center, and the team calculated that its protons and neutrons reached a density analogous to the effect of cramming New York City into a sugar cube. At that density the protons and neutrons basically overlap, Galatyuk said. They don’t break up into free quarks, as happens in quark-gluon plasma (a phase of quark matter thought to have filled the universe in its first microseconds), but instead start to bunch up, acting more like clusters of six or nine quarks than triplets.

By confirming that this temperature and density corresponds to an exotic state of matter, HADES’ result should help theorists calibrate their approximate QCD calculations and broaden the range of situations where the approximation schemes can be applied. Collisions at particle accelerators like RHIC produce matter and antimatter in equal quantities, a fact that researchers have used to confirm QCD predictions describing those conditions. But the more protons and neutrons outnumber their antimatter counterparts, the less accurate those calculations become. By looking at a fireball rich in protons and neutrons, the HADES experiment gives theorists a glimpse of the kind of physics they should expect when there are predominantly these particles around.

Van Buren at RHIC said the new measurement will turn heads but also raise eyebrows. “I do know that people in my collaboration will be highly interested in seeing the result,” he said, “and also very questioning of how they got to the result.” In particular, he said the way the HADES team calculated and removed nuisance electron-positron pairs that didn’t come from rho particles will need to be scrutinized.

If the result stands, it will help theorists tune their calculations of the exact quark matter phase that forms inside neutron stars, which have lower temperatures and even more neutrons than the HADES fireballs. Galatyuk hopes future observations of gravitational waves from neutron star collisions, as well as additional measurements from particle colliders, will help extend and validate such theories.