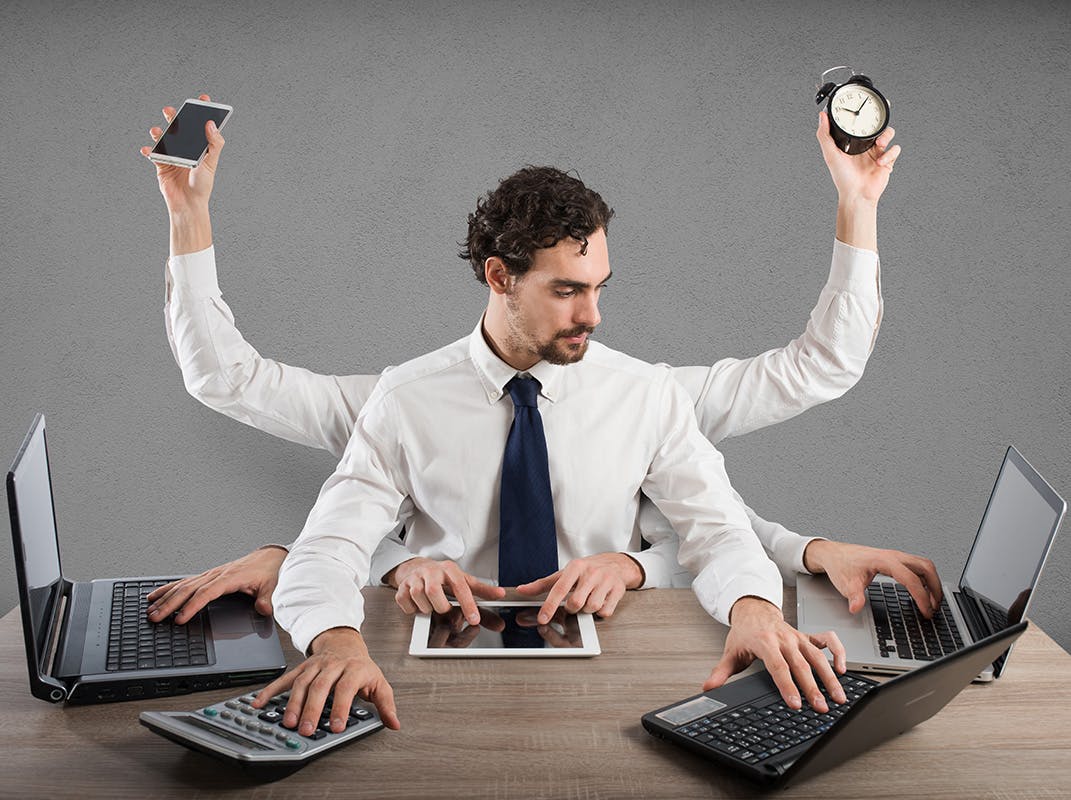 Our technology-rich world has proven to be both a blessing and a curse. While on the one hand we have access to information or people anywhere at any time, on the other hand we find our attention constantly drawn by the rich, multisensory, technological environments. It all started with the graphical user interface that took us from the flat, two-dimensional text-based environment that operated on a line-by-line basis similar to a typewriter, to a small picture depicting an operation or program. From there it was a short hop to a completely multisensory world appealing to all of our visual, auditory, and tactile or kinesthetic senses. We now see videos in high definition, often in simulated 3-D. We hear high-definition stereo sounds that feel as crisp as sounds in the real world. Our devices vibrate, shake, rattle, and roll, and our attention is captured. It is no accident that we now attach specific ringtones and vibrations to certain people to grab our attention.

When Dr. Larry Rosen hears that piano riff from his iPhone he knows it must be either his fiancée or one of his four children, and he grabs the phone before the end of the first few notes. As B.F. Skinner would say, he has been positively reinforced on a fixed-ratio schedule, as it is almost always a positive experience to talk to any of them. On the other hand, several people in his contact list have an “alarm” ringtone, which causes the exact opposite visceral reaction, and he reaches for the button to ignore the call.

Students could not focus for more than three to five minutes.

Our technology continues to find ways to attract our attention because this is what brings “eyeballs,” and the common marketing wisdom is that eyeballs bring money. As you glance at your iPhone you see little red circles with white numbers indicating that something awaits you: four unread email messages, 10 Facebook notifications, and so many reminders that your mind is overwhelmed with which icon to tap first. Your iPad does the same, as does your laptop, which particularly taunts you with numerical notifications of unread messages, flashing icons telling you that you need to back up your computer files, and on and on.

Media multitasking—which is accomplished by your brain not performing two tasks simultaneously but instead by rapidly switching from one task to another—occurs in every sphere of our world including home, school, workplace, and our leisure life. And this is not just limited to the younger generation. A recent study followed a group of young adults and a group of older adults who wore biometric belts with embedded eyeglass cameras for more than 300 hours of leisure time. While the younger adults switched from task to task 27 times per hour—once every two minutes—the older adults were not all that great at maintaining their attention either, switching tasks 17 times per hour, or once every three to four minutes. Former Microsoft executive Linda Stone dubbed this constant multitasking “continuous partial attention.” Frequent task switching is something we all do, and the more often we switch, the more detrimental it is to our real-world performance.

Unless you monitor someone’s computer as well as his or her smartphone and all his or her other devices, it is difficult to know how much task switching is truly occurring. However, several studies have used different research tools to try to assess real-world task switching. For example, in a recent study Dr. Rosen’s lab observed students—ranging from middle school to college age—studying for 15 minutes in an area where they normally study. Shockingly, students could not focus for more than three to five minutes even when they were told to study something very important. This study replicated work by Dr. Gloria Mark and her colleagues at the University of California, Irvine, who observed that IT workers were similarly easily and frequently interrupted.

We appear to have lost the ability to simply be alone with our thoughts.

Other researchers have asked people to keep detailed diaries of their daily media and technology use; one particular study of 3,048 13- to 65-year-old Dutch teens and adults found that people of all ages multitasked at least a quarter of the time—with teens dual tasking 31 percent of their day—although their most common combinations were different. While 13- to 16-year-olds preferred to combine listening to music with being online, engaging in social media, or viewing online videos, young adults (25 to 29) preferred combining email, watching television, and visiting websites, and older people (50 to 65) preferred combining more traditional media activities such as email and radio, television, and visiting websites. Other studies have validated and extended these results; research from Dr. Rosen’s lab showed that, when asked how easy or difficult it was to pair a variety of tasks together, members of younger generations reported that they felt that it was rather easy to pair most tasks, while those of older generations felt that only more well-practiced tasks could be easily combined.

One interesting aspect of this penchant for combining tasks is that we seem to have lost the ability to single task. Glance around a restaurant, look at people walking on a city street, pay attention to people waiting in line for a movie or the theater, and you will see busily tapping fingers. We act as though we are no longer interested in or able to stay idle and simply do nothing. We appear to care more about the people who are available through our devices than those who are right in front of our faces. And perhaps more critically, we appear to have lost the ability to simply be alone with our thoughts.

Dr. Rosen’s lab has been studying this phenomenon for the past decade and has seen a constant increase across generations in how often people check in with their devices. The vast majority of young people check their smartphones every 15 minutes or less and 3 out of 4 young adults sleep with their phones nearby with the ringer on or on vibrate so as not to miss a nighttime alert. While the typical college student owns an average of seven tech devices, older adults are not far behind. Where we used to read, we now skim. Where we used to write, we now use shortened fragments to convey our thoughts. Write a letter? It’s much easier to zip off a brief text or an email message. When Twitter first appeared we used to shake our head at the impossibility of putting our thoughts into “only” 140 characters. Now this appears normal and fits our task-switching lifestyle. When was the last time you read a book, a long article, or literally anything more than a page or two without taking a quick peek at your phone or web browser or without the television on in the background? Eye-tracking studies show that when we read a webpage or any text on a screen we don’t read it the same way that we read a book. Rather than our eyes passing from word to word along each successive line of text, we tend to read in an “F” pattern, where we read the top and left sides of the page, with a brief foray into the text somewhere in the middle, rather than the complete page line by line. Add in hyperlinks, ads, multimedia videos, scroll bars, and all of the other enticing distractions on a webpage, and it is not surprising that we have difficulty attending to anything for more than a few minutes.

We are most certainly impatient, which you can verify by watching a group of people all checking their phones every three to five minutes regardless of what they are doing at the time or who they are with. A recent study from University of Massachusetts, Amherst, and Akamai Technologies demonstrated our collective impatience by collecting server data from 23 million online video views; the data showed that average viewers begin to abandon a video if it takes more than two seconds to buffer, and 6 percent more viewers click on something else every additional second of buffering. By these data, even a brief 10-second delay in starting a video provokes nearly two-thirds of viewers to leave that screen for another source of information. These quantitative data, collected without the knowledge of the viewers, corroborate survey and experimental data highlighting what was originally dubbed the “four-second rule,” referring to the time that an average online shopper is likely to leave a website for another if it does not download. More recent work has even suggested that the four-second rule may actually be closer to a “two-second rule” or even a “400 millisecond rule” (less than half a second), indicating that we are all quite impatient and prone to diverting our attention rapidly from one screen to the next if our needs are not being met instantly.

From The Distracted Mind by Adam Gazzaley and Larry D. Rosen, published by the MIT Press. 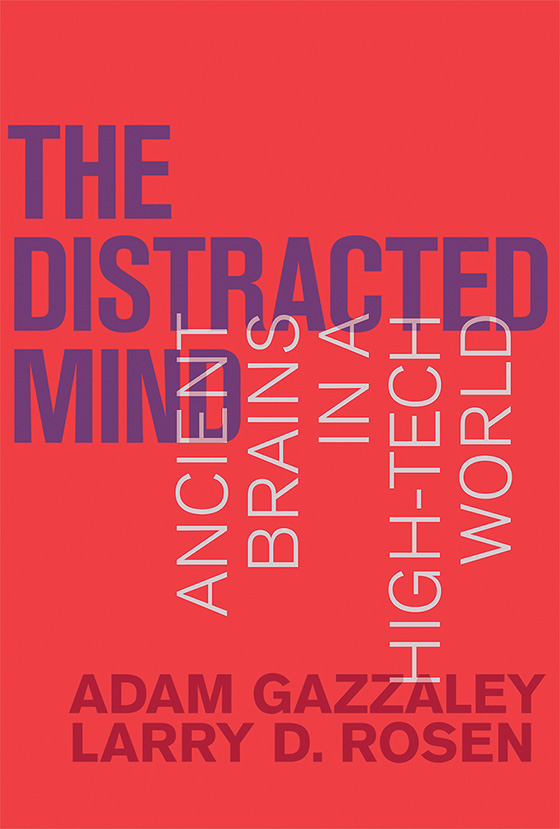