The Invasion of the Super Insects 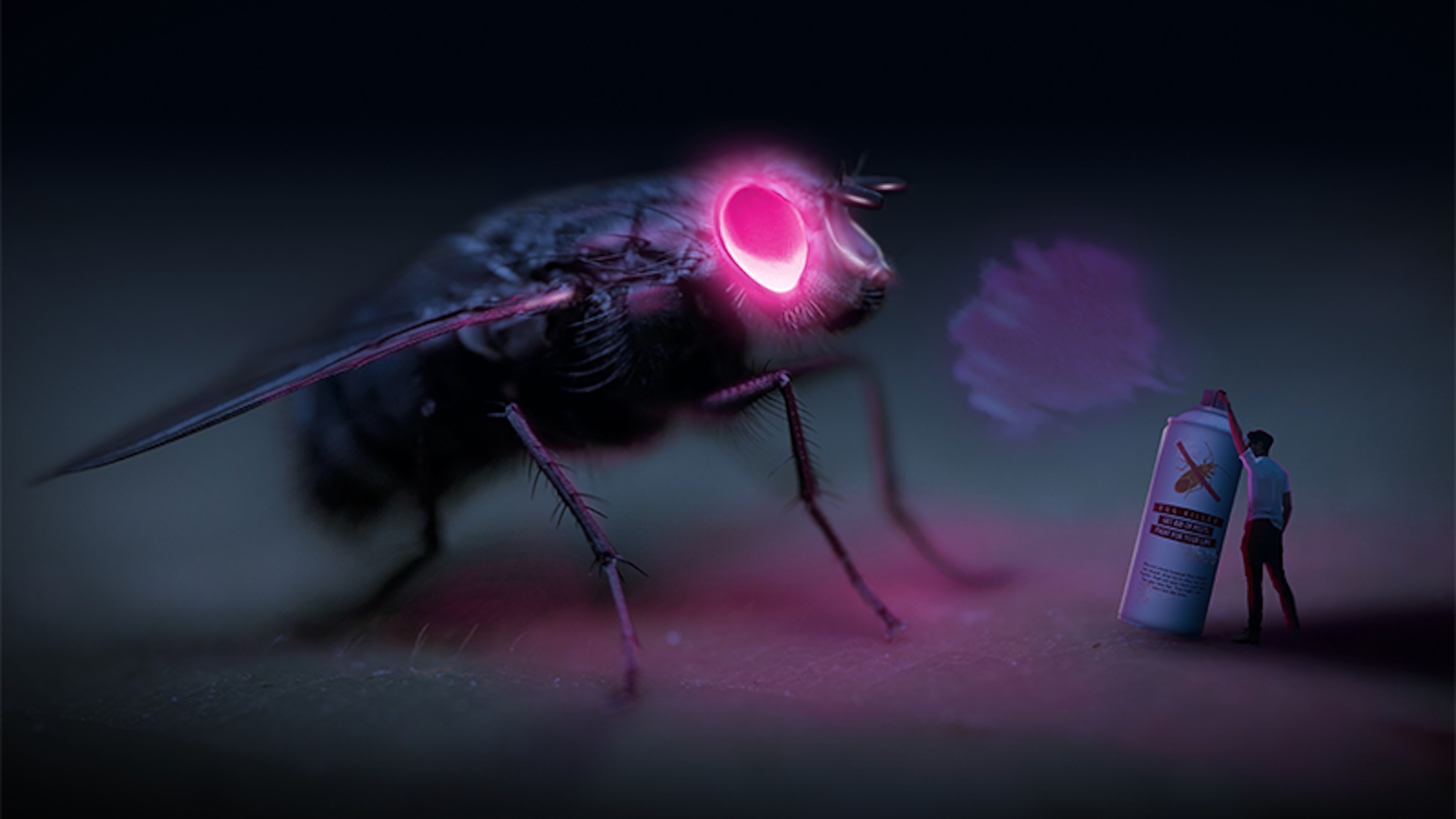 One day, about 60 million years ago, a little leafcutter moth landed on an ancient sycamore tree to lay eggs in its leaves. The larvae grew, nestled inside a comfy enclosure akin to a sleeping bag made between the leaf’s thin layers. Once hatched, they ate their way through to the surface and left to perpetuate their kin. Most of the chewed-up leaves swirled down to the earth, decomposing shortly after.

But this leaf, along with a few lucky others, was destined for something else, an unimaginable feat verging on immortality. When it fell, this leaf either sank deep into mud or was swept away by a flooding river that buried it within the sediment layers. There, tucked away from oxygen and the bacteria that would’ve finished what the larvae did not, it survived for millennia, becoming fossilized. It lay there, tucked into the bedrock of obscurity, until one day scientist Lauren Azevedo-Schmidt, who was working on unearthing such relics, spotted it on a fossil bed in Southern Wyoming.

Azevedo-Schmidt pried the leaf out of the rock with a paleo pick and chiseled it out of the stone slab. In her lab at the University of Wyoming where she was working on her Ph.D., she put the fossilized leaf under a microscope and examined the remains of the prehistoric larvae’s handiwork, noting the damage done—the round, hole-like pockets in which the creatures had lived. Then she added the sample to the existing collection of chewed-up and scratched-up ancient leaves, which by the end of her doctoral work amounted to a veritable forest: 77,763 specimens.

Within this “stone forest,” Azevedo-Schmidt and her supervisor, paleoecologist Ellen D. Currano, documented different types of leaf damage—a concept they describe as “damage diversity.” They found seven types of miniature decimation, from holes to galls to piercings. Then they compared the leaf damage done by the prehistoric insects to the destruction made by the creatures of our era. The results flew in the face of what they expected.

They found that compared to the insects from the late Cretaceous period—about 67 million years ago—modern bugs are doing an unprecedented amount of damage to plants. The more recent leaves, handpicked from modern woods and in existing herbariums—the Smithsonian Environmental Research Center in Maryland, Harvard Forest in Petersham, Massachusetts, and Le Salva in Costa Rica—were more chewed up, pierced, and misshapen that those from eons ago.

Compared to prehistoric leaves, modern ones also tended to be mangled in more ways. They had a greater “damage frequency” as well—which meant that there were many more chewed up and misshapen leaves in the recent samples than in the ancient ones. This pattern intensified in the past century, hinting that the industrial revolution played a role.

“The difference in insect damage between the modern era and the fossilized record is striking,” says Azevedo-Schmidt, now a post-doctoral researcher at the University of Maine. They also found that the damage levels have been rapidly increasing over the past century. Herbarium specimens from the early 2000s were 23 percent more likely to have insect damage than those from the early 1900s.

That drastic difference in herbivory levels, as researchers call it, was especially strange to observe, given the recent concerns about dwindling insect populations1 and fears over an insect mortality apocalypse.2 “It was very surprising to find such unprecedented levels of damage, despite widespread insect declines,” Azevedo-Schmidt says.

Their findings, published this October in the Proceedings of National Academy of Sciences, add an ominous new twist to the environmental fate of plants and trees.3 Today we need forests more than ever to sequester carbon and to convert carbon dioxide into oxygen to fight climate change. But nations are razing forests to make room for animal feedlots. Timber companies are running the chainsaws around the clock to supply wood for houses, furniture, guitars, paper, you name it. Trees like the mighty Dutch elm are being felled by a pandemic of diseases. And now along comes the possibility that our age is breeding swarms of super insects that are chomping their way through forests.

“Like all good studies, this one opened up a lot of other questions,” says Rayda Krell, who studies the interactions of insects and plants at Western Connecticut State University. If the team had found that in the past insects had been chomping down plants at similar rates, it would mean that since forests survived it in the past, insects are unlikely to fell them now, she says. “But instead, we find ourselves in a very uncertain place.”

Azevedo-Schmidt and her colleagues don’t have definitive answers about how we got here, but they offer a few theories, rooted in the complex interplay of climate change, invasive species, evolution, pollutants, and selective pressures.

Perhaps there is a force, for example, linking climate change to more voracious insects. Indeed, scientists have linked warming weathers with increased crop loss from insects.4 But, looking over the rock record, that dynamic doesn’t explain the full picture, Currano says. The Paleocene period, from which many samples were collected, was so warm that today’s Wyoming was home to palm trees and crocodiles. Moreover, during the period from which the fossil leaves were sampled, temperatures and carbon dioxide levels spiked multiple times, but the leaves from that era were significantly more intact. “So if the insect damage was only controlled by increased temperature and increased CO2, we should have seen the spikes in herbivory,” Azevedo-Schmidt says. “But we didn’t see that.” That means that some other factors are making today’s insects more rapacious.

Are we looking into a bleak, leafless future?

Another possibility is the more recent rapid-scale movement of insect species. After the industrial revolution, people started traveling much more widely than ever before—first by boats and trains and later by automobiles and planes. They began carrying and distributing—sometimes accidentally but many times intentionally—plants, animals, and insects to new places, facilitating the spread of invasive species that often decimated native plants at a greater scale than the insects that had co-existed with these plants for centuries before.

The evolutionary dynamics between plants and their eaters also favor the latter. Trees evolve slowly while insects do so much more quickly. Trees grow for decades and some can be centuries old, so they aren’t particularly flexible when it comes to change. But the bugs, with their typically short lifespans, are much more adaptable to environmental changes, like temperatures or a new food source. In this race for survival, “plants just can’t keep up,” Azevedo-Schmidt says, leaving them open to increased predation, especially if something changes in the environment.

Ultimately, we might also be super-charging the bugs even more directly. With the pesticides, insecticides, and other toxic chemicals we use to exterminate unwanted creatures that either destroy our crops or otherwise annoy us, we kill off the weaklings. The survivors are the super-creatures with super appetites. It is a phenomenon similar to superbugs of the germ world—the more antibiotics we use, the more tough and resistant microbes we breed. “Pesticides make me very nervous because they put selective pressures, making very, very ravenous insects,” Azevedo-Schmidt says. While we don’t know if or how pesticides could influence insects’ hunger, the survivors may have outsized appetites, the researchers hypothesize. And these bugs don’t stop at the periphery of agriculture. They often eat right on, into the forests.

Does this mean we are looking into a bleak, leafless future? Right now, we need our trees more than ever—to sequester carbon and to convert carbon dioxide into oxygen to fight climate change. Scientists say they are somewhat optimistic that we still can mend things through fairly obvious remedies, such as curbing chemical use.

But Azevedo-Schmidt hopes we might also get backup from Mother Nature, who sometimes deploys unexpected, eleventh-hour self-regulating mechanisms.

She cites one example. Introduced to the American continent in the 1800s with the idea of using it for silk production, the larvae of gypsy moths (Lymantria dispar) can defoliate large swaths of forests in the years when it hatches in abundance. But then a different biological force arrives, in this case a predatory fungus, which essentially liquifies the ravaging bugs. “It turns the caterpillars into this green ooze that drips from the trees and gets all over you,” Azevedo-Schmidt says. “So there’s kind of a check and balance system,” she points out, thanks to which the forests may still grow in our future.

For her part, Krell puts some faith in human ingenuity to help clean up messes we’ve made. “As a population, we’re so inherently innovative,” she says, that we still may be able to save our forests from increasingly insatiable insects. “We don’t give up, which is, I guess, why we’re so successful as a species. So I remain hopeful.”