The Man Who Seduced the World with Whale Songs

Roger Payne sparked the anti-whaling movement. He’s not done yet. 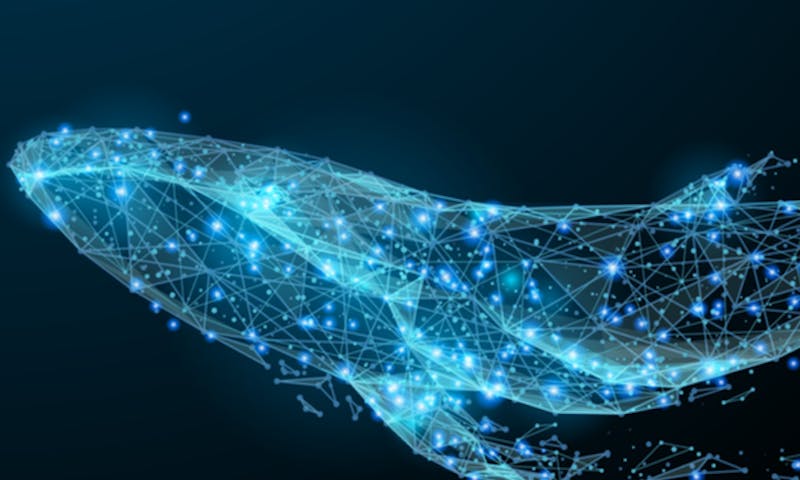 It’s been more than 50 years since biologist Roger Payne brought whale song into the lives of millions via the popular album, Songs of the Humpback Whale. At the time, commercial whaling had decimated global whale populations, and Payne’s record helped spark the anti-whaling movement, the haunting songs of the humpbacks its unofficial anthem. In the late 1960s, Payne was a senior scientist at the Institute for Research in Animal Behavior, studying animal echolocation. His chance encounter with whale song and the stunning subsequent success of the album led him to found the nonprofit Ocean Alliance in 1970, an organization devoted to scientific research and preservation of life in the world’s oceans.

Payne is now 86 years old, but no less invested in the plight of whales and other denizens of the seas. He recently spoke at a meeting of the Interspecies Internet, where Ocean Alliance was awarded a $50,000 prize to digitize the hundreds of hours of whale songs that Payne, his students, and colleagues have collected over the years.

I recently met up with Payne at his home near Woodstock, Vermont, to chat about his remarkable career, the state of the environment, and his current project to create “something that’s so intriguing to the world, it’ll have the same kind of impact that whale songs have had on people.”

Your background is in the neurophysiology and behavior of small animals. How did you get involved with whales?

I spent my life studying subjects that could be analyzed in direct and scientific ways, but which could also generate strong emotion. I always felt this was the best way to connect with people and get them to care about the natural world. In my first 10 years of research, all of my research was experimental work—as an undergraduate I studied the directional sensitivity of bats’ ears under Donald Griffin; for my Ph.D., I showed that barn owls can locate a mouse in total darkness, based solely on hearing it move; and for a postdoc, I studied how moths detect the approach of a bat, even though each moth ear contains just three sense cells. However, at the same time, I could see the wild world was falling apart and I worried that the kind of work I was doing, though interesting, was not of much value for getting people to see the importance of conserving nature.

So I asked myself: If the only thing I knew about in enough detail to speak with any authority was how animals use sound, what could I do that might make a difference to the grim future of the natural world? And then I thought of whales. I knew they were in grave danger but I knew absolutely nothing about them. I had seen a distant spout once, when crossing the Atlantic by boat, but that was my sum total exposure to any whale species.

Why did you start recording humpback whales?

Back during the Cold War, I’d heard about a man who’d been listening for Soviet submarines in Bermuda, and had inadvertently captured what he thought were whale sounds. My former wife, Katy Payne, and I went down to Bermuda and met this man, Frank Watlington. He played us one of his recordings, though he did so under the worst possible conditions. We were in the engine room of Frank’s research vessel and there was a generator roaring away. Frank took a tape out of his pocket, threaded it across the tape recorder heads, and after listening through his headphones to adjust the sound, he took his headphones off and put them over my ears while shouting, in order to be heard over the roar of the generator: “I think these may be whales!”

In spite of the racket, what I heard blew my mind. It seemed obvious that here, finally, was a chance to get the world interested in preventing the extinction of whales.

I’m talking about something that gets people fascinated with nature. Makes them weep, fills them with delight.

When did it occur to you that they were actually structured songs and not just random noises?

It took time for me to notice, because while the whales do repeat themselves, several minutes often pass before the same stanza comes around again. Also, there are no breaks in their songs. Unlike birds, they sing a river of sound that flows on and on, sometimes for hours. But I finally noticed these were repeat performances after maybe 40 days of using Frank’s tape as an alarm clock and waking up to it every morning. I finally realized, “My God, these animals are repeating themselves.” And from that point on I started listening to their sounds with far more attention.

You published an analysis of the structure of these songs in Science—and then you decided to produce a commercial record aimed at the general public. Why did you decide to make the record?

My idea was, if you can move people emotionally, you can also get them to act. To see if I was right, I started playing humpback whale sounds to friends and other small audiences, and soon it became very clear that these sounds moved people deeply. In fact, some friends wept when they heard them—they’re that powerful.

Ah! Another notch in the humpback whale’s songbelt. In any case, I figured if we could get these sounds into the ears of the world, whales might have a very different future. I also made a decision I knew might prove dangerous to my career: naming the humpback whales’ repeating vocalizations “songs,” which most people identify as things that humans write and sing. But there was a dictionary of biological terms that had recently been published, which devoted tens of its pages to defining and discussing the term “song.” The definition that underlay all the implications and innuendos was that in order to qualify as a song a sequence of sounds had simply to be rhythmic and repetitious. And since all of the humpback whale sounds I had heard up to that point, including their remarkably complex, virtuoso performances, had those characteristics, it seemed both accurate and safe to label such vocalizations “songs.” And that is what my co-author of the Science paper, Scott McVay, and I did.

But that decision turned out to be far more important than I recognized at the time. Songs resonated with people as something that individuals did, and was not just some feature of a species like their baleen or the shape of their flippers.

When I played long samples of songs to people, their initial reaction was predictable: You would hear absolute quiet in the audience for maybe 20 seconds. And then a buzzing and whispering would wash like soft waves throughout the auditorium; the muttering would decline and you’d hear occasional fragments of people’s brief remarks to their companions. But then, those comments too would die down until, finally, universal rapt attention, while the whale continued its boldly declarative performance.

The audience would pass through a kind of barrier. It was most obvious at the end, when I finally faded the sound out, watching people as they returned to the “now” of the real world looked as if they were slowly coming out of some kind of trance. It was very moving to  see. These songs seemed to have the power to take people into some inner place, much like a rare passage of music might. And so I concluded that these strangely familiar but at the same time utterly unfamiliar sounds could capture the world’s attention.

How does your work with the Ocean Alliance further your conservation goals?

The Ocean Alliance conducts research with the goal of getting people interested in some problem concerning the oceans. When I started, pretty much nobody paid much attention to the seas. Everybody knew there were some critters out there called whales and that they were awfully big, but not much else about them. Because of Moby Dick, people knew the name sperm whale, but that was pretty much it. Most people hadn’t even heard of humpback whales. But humpbacks have become among the best known whales, because of their songs.—their songs have captured the imagination of humanity in a way few other things ever have, I think, and that’s what gets people to act.

He took his headphones off and put them over my ears while shouting, “I think these may be whales!”

How do you feel now about the serious problems we now face, with climate change, ocean pollution, overfishing, and so on?

I think we’re headed in the right direction, but headed there so slowly that unless we can accelerate it by a couple orders of magnitude, I see no hope. However, I have noticed over the years that when humans change in some very basic way, they often change so quickly, all you can do is sit back and watch. A classic example was when the Berlin Wall fell. Nobody knew that anything could happen that fast and also completely shift the whole balance of power—and of possibility.

If we can finally get people interested enough and stimulated enough by what’s happening in the world, I believe that humans will change, and if we do, that we will change so fast people will hardly be able to keep up with what’s happening. And if that starts, then I’m filled with hope. But if we can’t do it before we’ve reached a point at which the consequences of our addiction to the status quo take over and start determining the future, then all we will be able to do is try to prolong our survival for a few more decades while the physics of change that we have unleashed take complete control of everything. It will be a very simple, runaway effect—the ultimate example of positive feedback, in which the worse things get, the faster they continue to get worse until their inevitable outcome, which under such a system is always catastrophe.

What do you think might be the most effective strategy to make change happen? Where should we concentrate? On government, business, international relations, globalism, local movements, or individuals?

I think we need something that appeals to the innermost values of our humanity. I’m talking about something that gets people deeply fascinated with nature. Perhaps something that makes people weep, or fills them with delight. After all, it is usually strong emotional reactions that trigger change—whether it is something utterly horrific, like people falling from planes while trying to escape the Taliban, or something beautiful like—dare I say it—whale songs.

Right now, I am involved with an effort to translate what I’ll call WhaleSpeak. I don’t say “language” because some of my colleagues are totally offended by any suggestion that a non-human has, or can have, a language. The ultimate hope is eventually to communicate on some meaningful basis with whales, no matter how simplistic or sophomoric it may turn out to be. And if that’s possible, I think we will get something that’s so intriguing to the world, it’ll have the same kind of impact that whale songs have had on people. And if we can achieve that, we will light new fires and create new landscapes in the imagination, and create the sort of environment that enables super-rapid change.

Stuart Firestein is a professor and the former chair of the department of Biological Sciences at Columbia University in New York. He is the author of Ignorance and How it Drives Science and Failure: Why Science Is So Successful, both from Oxford University Press.

This article first appeared online in our “Whale Songs” issue in September, 2021.