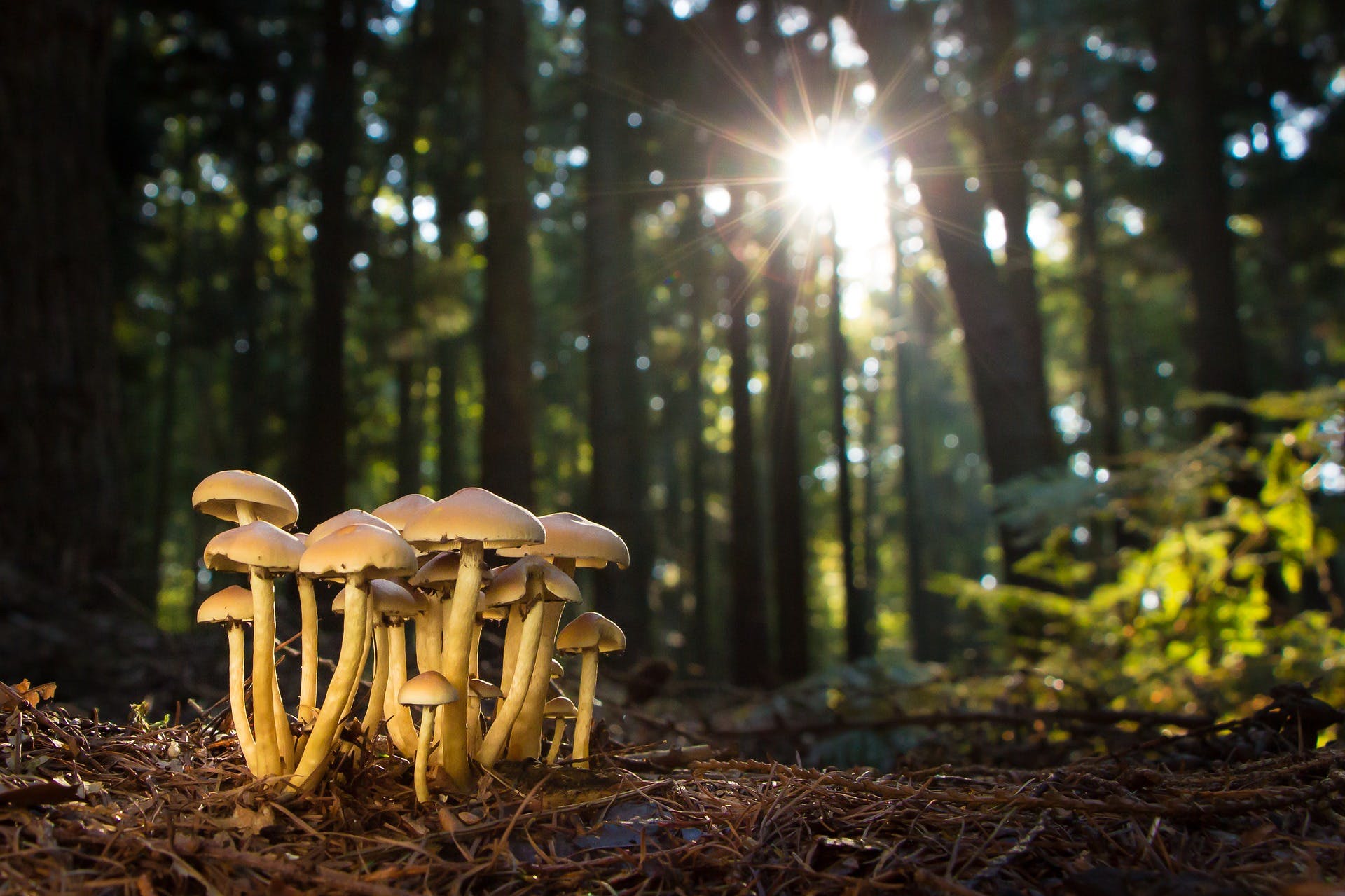 Scholars and readers often interpret poet Sylvia Plath’s “Mushrooms” as a feminist allegory, rather than a meditation on mushrooms themselves. Many argue that the poem—from Plath’s 1960 collection The Colossus and Other Poems—uses mushrooms as a metaphor for women in mid-century America, stuck in a world of domesticity and discontent, hungry for more as they “Diet on water, / On crumbs of shadow, / Bland-mannered, asking // Little or nothing.”

But what if we resist reading the human world in between the lines and instead examine Plath’s “Mushrooms” by paying attention to the natural world it depicts? What do Plath’s lines—so powerfully read as an allegory—tell us if we understand them at face value, as a description of actual mushrooms? What can we gain by thinking about mushrooms themselves—the literal fungus—before we dive into any metaphorical exploration of what mushrooms might represent?

To ask these questions and to learn more about mushrooms, Poetry in America took a trip to the Harvard Forest in Petersham, Massachusetts to speak with scientist Serita Frey. Frey is a microbial ecologist who specializes in soil and fungi, and so we asked her to teach us about mushrooms in relation to this poem. With Frey we considered several questions: What are the ways in which Plath’s poem actually captures the science of how mushrooms sprout and proliferate? How do mushrooms grow, and what is their relationship to dirt? To water? To air? To darkness and light? Do mushrooms really have toes, noses, or soft fists?


Our toes, our noses

Take hold on the loam,

Stops us, betrays us;

Our hammers, our rams,

Shoulder through holes. We

On crumbs of shadow,

So many of us!

So many of us!


We are shelves, we are

Tables, we are meek,

In spite of ourselves.
Our kind multiplies:

We shall by morning

Our foot’s in the door.

According to Frey, the poem effectively conjures the small stature but subtle strength of the mushroom. Though scientists are taught not to anthropomorphize their subjects, Frey nonetheless finds Plath’s comparisons between human body parts and mushrooms apt. She particularly appreciates the imagery around physical strength, despite the miniature size we normally associate with fungi. “Personally, as a fungal biologist, I see fungi as incredibly robust in terms of the work that they do in the environment, and their importance, really, on the planet,” Frey affirms. The mushrooms in Plath’s poem silently “shoulder,” “heave,” and “hammer,” proliferating above ground, while below ground they occupy a larger territory than the human eye can perceive. “The mushroom is just the smallest portion of the actual fungal body,” Frey explains. “So the fungus itself is completely unseen, underground—it may cover this entire forest.”

The poem’s formal regularity contributes to the visual sense of strength that Plath attributes to the mushrooms. Each of the poem’s eleven stanzas has three lines, with five syllables per line. Frey imagines this sturdy compact stanzaic form as a reflection of a mushroom’s tensile physical existence, “pushing its way through the Earth.” Indeed, the poem’s small rectangular stanzas visually reinforce the image of mushrooms as edible shelves or tables, softly but persistently heaving, hammering, and shouldering their way up through the soil and into the air.

Even as Plath and Frey emphasize the strength of mushrooms, a sense of tense inaction hangs over the poem. It feels almost as if, by virtue of their silent existence, the mushrooms are tricking the viewer into ignoring them. This silence imbues the poem with an eerie chill as the mushrooms grow “very quietly,” “perfectly voiceless,” “soft,” “earless,” “meek.” The mushrooms are so quiet that they don’t even breathe—they simply “[a]cquire the air.” But Frey’s evaluation of mushrooms tells a different story. “I don’t see [mushrooms] as meek or weak in any way,” Frey notes. Neither, it seems, does Plath. In the final section of the poem, the mushrooms multiply, working to reproduce both in darkness and in light as they, “voiceless,” “inherit the earth.”

When the poem’s mushrooms portend that their “kind multiplies,” it’s no accident. Frey notes that the mushroom functions primarily as a reproductive body for the fungus. “The mushroom is … a vehicle to get the next generation [of fungi] into the world,” Frey explains. While the mushroom’s reproductive function seems to point us back to the gender metaphor often applied to this poem, Frey proposes a different understanding for us to consider based on her scientific perspective. “I actually wondered if she was talking about the poet and the act of writing poetry,” Frey said. “You often hear of writers saying that their poem or their piece of prose kind of came out of airy nothing or came out of nowhere. And so like a mushroom, perhaps, it was kind of under the surface. And then overnight it comes out of the ground and shows itself to the writer.”