The Mystery of Dark Matter

The vastness of the universe is mostly full of dark matter and dark energy, which we can’t see and don’t yet understand. 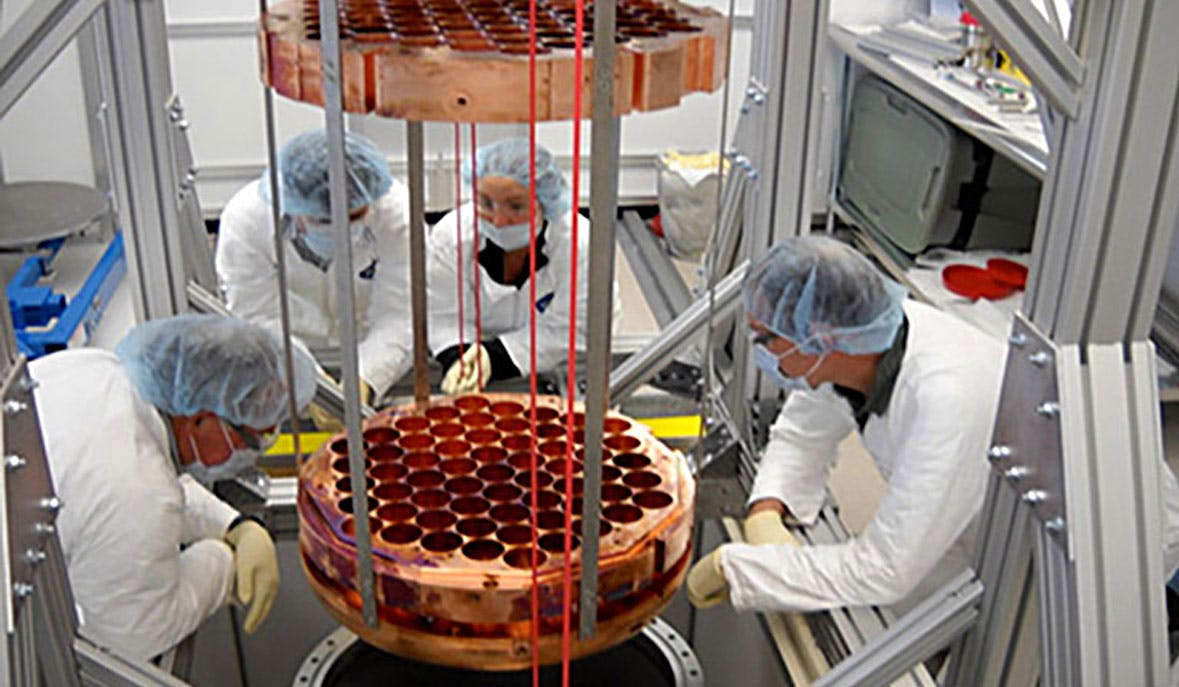 Can this mysterious substance, a new form of matter whose existence is inferred from the behavior of the universe, be detected in an earth bound laboratory?

The presence of a clump of matter deforms spacetime, so that light passing near matter appears to bend. When it’s a very big clump—whole galaxies—light bends enough that astronomers can measure the bending and deduce how much matter is there. But when astronomers compare the result to the amount of matter they can see (the starlight from the ordinary matter in stars), there’s a problem—not enough matter. In fact, about 85 percent of the matter in the universe is invisible, and although it exerts a gravitational force, it doesn’t form stars that emit light. Scientists call it “dark matter,” and just what it is constitutes one of the most fascinating mysteries in physics today.

It might seem a bit uncomfortable that the familiar electrons, protons, and neutrons that make up the atoms and molecules that constitute the earth, our homes, all of our tools, and our bodies and brains add up to only 15 percent of the matter in the universe. In fact the true picture is even more extreme: When scientists account for the presence of “dark energy,” an equally mysterious concept, ordinary matter accounts for less than 5 percent of the stuff of the universe. It’s almost as if ordinary matter and the universe that we can see in the night sky is just a sideshow, an afterthought of creation. Indeed, it’s clear that in the early eons of the universe, it was the dark matter that clumped together first, and then its gravitational pull caused ordinary matter to fall into those clumps and ignite to form the stars and galaxies that we can observe.

Even more unsettling, dark matter can flow right through ordinary matter—our bodies—with less interaction than any known particle, even the ghostly neutrino. The electromagnetic force doesn’t seem to affect dark matter in conventional ways, so dark matter and normal matter don’t interact chemically. And the strong nuclear force doesn’t seem to affect dark matter either, or if it does, only very weakly. So what kind of physical laws—other than gravity—govern its behavior, and how can scientists study it if they can’t measure it in the laboratory?

Take axions, for example. Under certain circumstances, and in the presence of a strong magnetic field, axions are thought capable of transforming into radio waves, which could be measured with very sensitive antennas. Conveniently, thanks to new superconducting quantum devices known as SQUIDs that work as a form of quantum amplifier, that sensitivity has recently increased dramatically, so detection is potentially feasible.

WIMPs, on the other hand, are thought to be capable (very infrequently) of colliding with normal atoms, and when they do, because they are massive, they would scatter those atoms like billiard balls. And subsequent collisions of the billiard balls could be observed. It turns out that atoms of xenon, a noble gas, constitute the best billiard balls for this purpose, because when two of them collide they emit a faint burst of light that can be detected by very sensitive phototubes—vacuum tubes with a light sensitive coating that converts the light into an electrical signal and that are commonly used in high energy physics. So detecting WIMPS, too, is potentially feasible.

Direct detection in the lab is one very promising approach to discovering the nature of dark matter. Producing dark matter at the Large Hadron Collider in Europe is a second approach. Using cosmic ray detectors to observe annihilating dark matter in space is a third. Whichever approach sees first evidence of dark matter, that will likely be just the first step to sorting out its properties. Ultimately, there may need to be a whole new set of physical laws that govern its behavior and that of dark energy—in effect, a whole new physics for this new, invisible, and fundamentally different kind of universe that we have discovered around us.

Detecting Dark Matter in the Lab

The race to find evidence of dark matter is underway, and underground searches for weakly interacting massive particles (WIMPs) are among the most promising approaches. One of these is the Large Underground Xenon (LUX) experiment. LUX is located about a mile underground (to screen out false signals from cosmic rays) in the Homestake Mine near Lead, South Dakota, in a laboratory previously used for a Nobel Prize winning experiment to detect neutrinos. The LUX experiment consists of a large tank that will be filled with 10 tons of purified xenon and lined with very sensitive phototube detectors. When a WIMP collides with a xenon atom, it sets off a kind of cosmic billiards game: The WIMP is so massive that it accelerates the xenon atom to nearly 700 times the speed of sound until it collides with another xenon atom. The xenon-xenon collisions give off a flash of light that can be detected.

The LUX experiment is supported by both public and private funds, but does yet have enough to pay for the xenon and run the experiment for three years—likely long enough to see if WIMPS exist. Thus an opportunity exists for $10–$12 million in private philanthropy to complete this search for dark matter.

The Axion Dark Matter Experiment (ADMX) is located at the University of Washington in Seattle. It is designed to detect axions by searching for their conversion to microwave photons, a conversion believed to occur in the presence of a strong magnetic field. What is unique about ADMX is the exquisite sensitivity of the experiment, which can reduce false signals and other noise to the limit allowed by quantum mechanics. The experiment consists of a powerful magnet and a superconducting resonant microwave cavity that acts as a kind of antennae when tuned to the mass of an axion particle. When an axion article passing through the magnet field transforms to a microwave photon, it deposits a tiny amount of energy in the cavity. That energy is then amplified by a superconducting radio amplifier known as a SQUID and converted to a measureable electric current. The SQUID is itself a quantum device—it detects the microwave energy produced by the axion in a way not possible for conventional detectors, which accounts for its extreme sensitivity. By systematically tuning the experiment to explore a wide range of possible axion masses, ADMX should be able to find axions if they exist in two of three likely mass ranges. ADMX, which is an international collaboration, has multiple sources of funding, but it too still needs funds—and estimated $10 to $15 million—to complete its search for dark matter.

Together these experiments have the potential to discover a new form of matter and initiate a whole new area of basic physics, and to shed some light on the dark nature of the universe.