The Strange Ecosystem in the Sea: Dead Whales 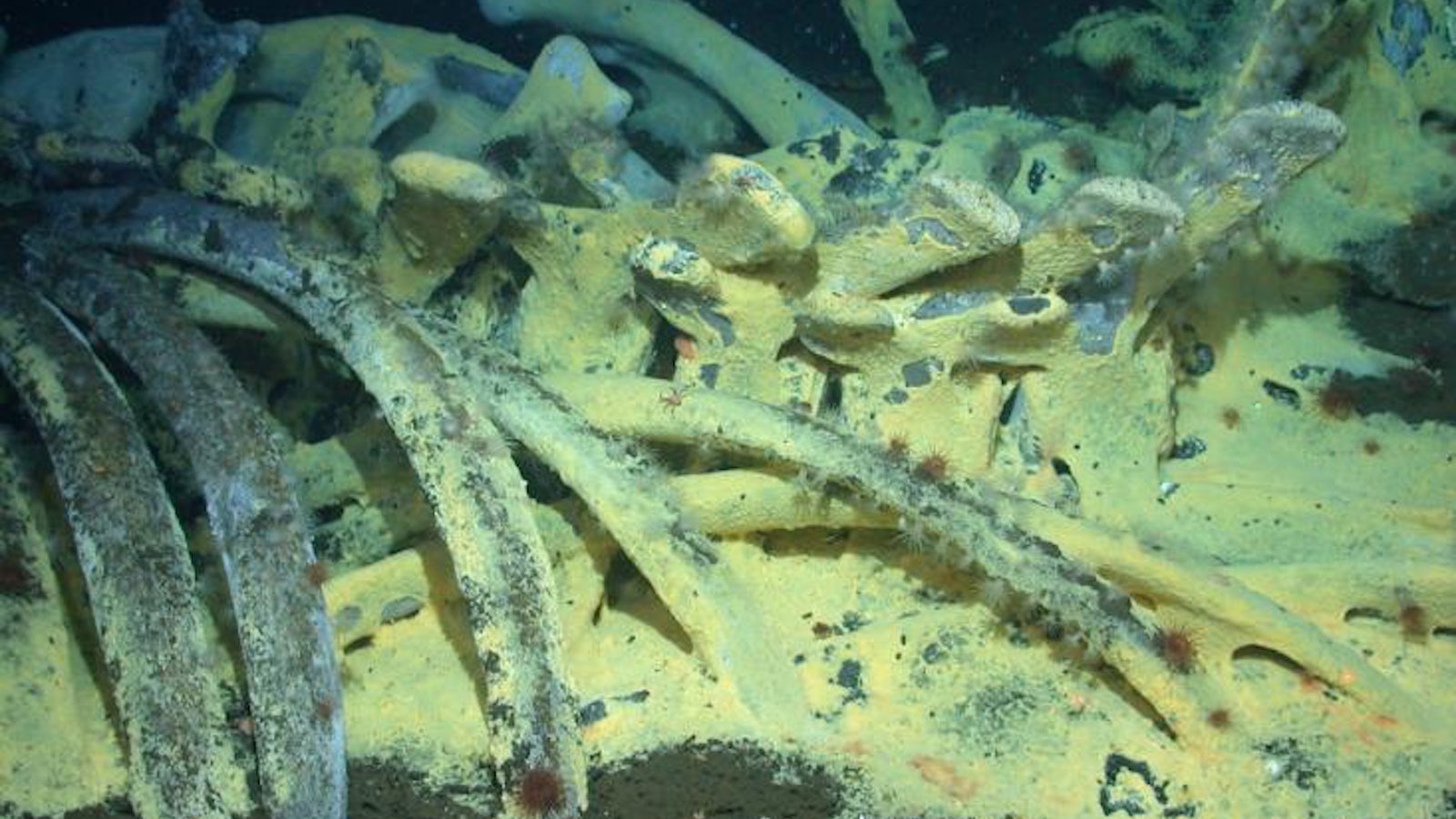 One April day in 2013, the submersible Shinkai 6500 descended to the base of the steep São Paulo Ridge, 13,000 feet under the Atlantic Ocean. “Hang on,” Paulo Sumida, a marine biologist, radioed to the submersible pilot from the support vessel on the ocean’s surface. “Those are whale bones.”

In fact, they were frozen vertebrae of an Antarctic Minke whale. The creature had weighed several tons, and its skeletal remains had been there for possibly a decade. To Sumida and his colleagues, this “whale fall” was a rare find. It was only the eighth whale carcass to be studied in detail since the late 1980s, and the only such find in the Atlantic Ocean (most have been found in the Pacific). Yet whale falls are a relatively common occurrence, especially along migration routes. The distance between neighbouring grey whale carcasses, in the North East Pacific Ocean, has been estimated to range from 3 and 10 miles.

It wouldn’t be quite right to think of a “whale fall” as a dead animal on land—say, an elephant—that hyenas and buzzards flock to for easy pickings. That’s because, as Sumida and his colleagues write in their Nature report, “Specialized organisms have been evolving in these habitats for millions of years since the appearance of large ocean-going whales and other vertebrates before them.” They’re deep-sea sources of “evolutionary novelty and biodiversity,” in other words. In the case of the Antarctic Minke whale, 41 species, most of them unknown to science, were found grazing on and around its bones. “A whale fall is not just a carcass but a carcass that holds a community of specialist organisms,” says Sumida, “It’s a whole ecosystem.”

In the food-deficient environment at the ocean floor, whale carcasses become veritable feasts. Scavengers like sleeper sharks bite and tear the soft tissue. Crustaceans colonise the exposed bones and the enriched sediments alongside. Other organisms break down bone lipids, emit hydrogen sulphide in the process, and spawn a chemosynthetic-based community.

Researchers call them organic islands, but their effect on genetic diversity is markedly different from actual islands. Since the organisms that colonize whale carcasses also eventually consume them entirely, whale fall communities are ephemeral, persisting for several decades at most. Nor do whale falls provide a geographical barrier to gene exchange, as islands do by isolating their inhabitants. Instead, they are like stepping stones for specialist organisms; once the resources of one carcass are depleted, organisms can migrate to another, feeling right at home with the new carcass’ inhabitants, some of which tend to be genetically similar to the newcomers. The whale fall discovered in 2013, off the Brazilian coast, for instance, showed a degree of community connectivity across ocean basins. Organisms like Rubyspira, a bone-eating deepsea snail, and Vrijenhoekia, a kind of bristle worm, for example, overlap with those found in the Monterey Canyon and off southern California. “They are cosmopolitan but they are not the same species,” says Sumida.

For certain organisms, whale falls may have pushed along their evolution in a different way. Take mussels, which are often served as seafood and usually found on rocky shores. There is a family of them that has invaded the deep sea and now live symbiotically with bacteria that allow them to synthesise hydrogen sulphide, an otherwise poisonous gas.

There are also some more piquant whale carcass dwellers. The Osedax, for example, a worm that does not have a digestive system, uses acid to dissolve hard bone parts to access the nutrients inside. The female Osedax keeps the microscopic males in tubes attached to themselves, which researchers have, perhaps unsurprisingly, called harems. This parasitic arrangement may help them avoid competition for food in a scarce environment. A new species of Rubyspira was also found (previously sighted only in the North Pacific). With a raspy tongue, the gastropod grazes on “bone dust” after certain crustaceans have dined on degraded skeleton filled with Osedax.

Growing up in Sao Paulo, 50 miles from the ocean, Sumida would follow Jacques Cousteau’s underwater adventures, mesmerized by his documentaries of sealife. But nothing of Cousteau’s prepared him for the habitats in whale corpses he’s studying on the ocean floor. They provide “such a different evolutionary scene,” says Sumida. “The animals get bizarre and specialised.”