The True Story of Medical Books Bound in Human Skin 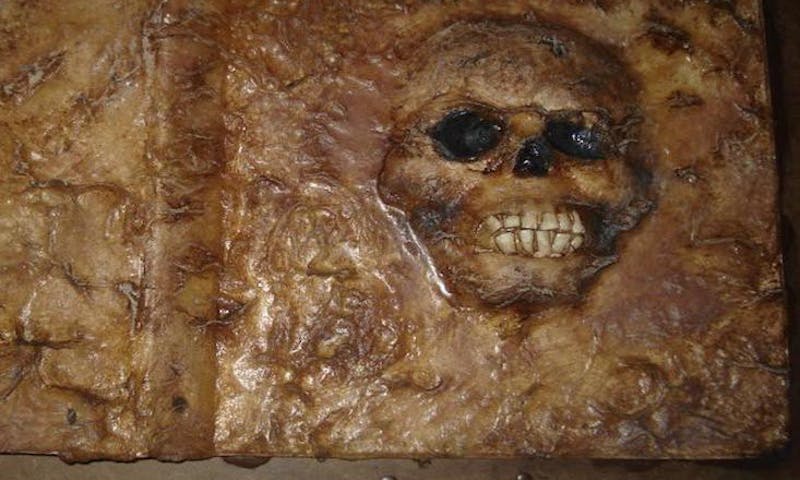 In 1868, on a hot, midsummer day, 28-year-old Mary Lynch was admitted to the Philadelphia Almshouse and Hospital, the city hospital for the poor, better known as “Old Blockley.” Lynch had tuberculosis, which was soon to be compounded by the parasitic infection trichinosis. She didn’t recover, dying in Ward 27 the following year, weighing just 60 pounds. The physician who performed her autopsy, John Stockton Hough, had an interest in rare and obscure books, and he was looking to rebind a trio of anatomical texts on human reproduction. So, he removed a section of skin from Lynch’s thigh, tanned it into leather in the hospital’s basement, and repurposed it as the books’ covers.

Lynch lives on in these three volumes, now housed at the Mutter Museum of the College of Physicians of Philadelphia. They are among numerous titles bound with human skin. Some of those date back at least as far as the 16th century, though their origins can be difficult to verify. The same goes for other objects made of leather from human skin; tales of them abound in history, but tend to be apocryphal, says librarian Beth Lander, who oversees the Mutter Museum’s human skin books.

Lampshades made from the skin of concentration camp victims are a familiar trope, for instance, but their existence has never been confirmed. A newspaper article, from 1888, recounts the author’s interaction with a man proudly wearing shoes crafted from human skin. The writer lists his acquaintance with various people who had human skin cigarette cases, slippers, and matchbook covers, suggesting that he was either taking liberties or ran in some deeply troubling circles. Even the human skin books at the Mutter Museum are in the company of a wallet long-purported to be made of human skin, but later shown to be just cow and sheep leather, says Lander. These human skin books, then, are the rare artifacts that prove that the practice of making leather goods from human skin is more than just a ghoulish legend.

According to Richard Hark, a chemistry professor at Juniata College in Huntingdon, Pennsylvania, medical-history and anatomy books are among those most commonly covered using human leather. “Many of the books we’ve encountered are medical books bound by physicians,” says Hark. “It’s a way to honor that individual who didn’t survive but did contribute to medicine.”

Hark is part of the Anthropodermic Book Project, a group of researchers that analyzes books rumored to be bound in human skin. He was first pulled into it when librarians at his own college asked him to investigate whether a book in the school’s collection might fall into that category. Scrawled on the inside cover of Biblioteca Politica, a Spanish political tract dating from the 17th century, was a note indicating that the binding was human in origin. The inscription became a well-known piece of campus lore, turning the title into a nuisance for Juniata’s librarians. They found themselves spending an inordinate amount of time fielding questions from students about the book’s provenance, especially around Halloween.

The ritual of binding books in human skin seems, at best, a dubious honor for the deceased.

“A lot of these titles had very fantastical stories around them and the literature surrounding them was mostly conjecture, rumor, and innuendo,” says Megan Rosenbloom, a medical librarian at the University of Southern California, in Los Angeles, who also works with the Anthropodermic Book Project. “There was almost no hard evidence about any of them.”

A Spanish law textbook in Harvard University’s Weissman Preservation Center Library, for example, is inscribed with the following:

The bynding of this booke is all that remains of my dear friende Jonas Wright, who was flayed alive by the Wavuma on the Fourth Day of August, 1632. King Mbesa did give me the book, it being one of poore Jonas chiefe possessions, together with ample of his skin to bynd it. Requiescat in pace.

Yet when Hark and his collaborators tested it, they found it to be covered in traditional sheepskin. Daniel Kirby, a private conservation scientist based in Milton, Massachusetts, and another member of the Anthropodermic Book Project, says this wasn’t surprising: The titles most likely to be bound in actual human skin are often those with the least exciting origin stories since they turn out to be mostly medical textbooks.

Traditionally, if a scientist wanted to determine what species a book’s binding came from, they would take a sample, isolate DNA, and test it. But with the books Hark and his colleagues are studying, such evidence can be difficult to tease out.

To turn animal skin into a hide suitable for shoes, coats—or bookbinding—tanners cure it in salt, soak it in water, then treat it with a series of harsh chemicals to soften it and prevent it from decomposing. To tan poor Mary Lynch’s skin, Hough used a bedpan that was likely filled with ammonia-rich human urine—a substance that would have been plentiful in the hospital, and was historically used in tanneries to prepare hides. “After that sort of treatment, you’re not likely to find a lot of usable DNA,” says Hark.

Rather than trying to identify DNA, Kirby and Hark use a technique known as peptide mass fingerprinting to analyze the peptide molecules—short chains of amino acids—found in collagen, a protein that can be found in skin, teeth, hooves, and antlers across the animal kingdom. Collagen is also tough, and because it stands up to far more abuse than DNA, it can be analyzed long after the death of the animal it came from.

To identify a book cover’s source, Hark generally takes a sample from the binding that’s just barely visible to the naked eye—about the size of a needle prick—then sends it to Kirby. Kirby puts the sample in an enzyme bath, which digests the collagen into its component pieces, called peptides. Each of the different peptides has a unique mass, and each species has a unique peptide combination. Using a mass spectrometer, researchers can determine the different peptides in a sample and identify the animal’s taxonomic family. The method isn’t that precise—Hark and Kirby can’t use it to differentiate between, for example, human and gorilla collagen—but primate samples are sufficiently different from those of cows and sheep for the researchers to determine whether a binding is primate or ungulate in origin.

Working with Rosenbloom and Mutter Museum curator Anna Dhody, Hark and Kirby have tested 30 books since the project began in 2014. They found that 16 were the real deal. Hark and Rosenbloom have identified over a dozen more, in holdings around the world. Back at Juniata College, Hark and Kirby found that the Biblioteca Politica was bound using plain old sheepskin—much to the relief of the school’s librarians who can now discredit all remaining rumors.

The ritual of binding books in human skin seems, at best, a dubious honor for the deceased. Rosenbloom says that when she first encountered the practice, she couldn’t comprehend how anyone would see it as veneration. Hark, though, argues that it’s not so different from more accepted means of remembering those who have passed, be it with a lock of hair or an urn of ashes.

Lander takes a dimmer view. Instead of a way for the physicians to honor their patients, she suggests the bindings may have reinforced the feelings of doctors as social superiors, especially to their poorer patients like Mary Lynch. It may have been that the physicians regarded their almshouse patients with some contempt, Lander says.

“There was the perception that if they could not serve society adequately in their lives, they could then be of service in their deaths.”