A revolution in archaeology is happening just when we need it most. 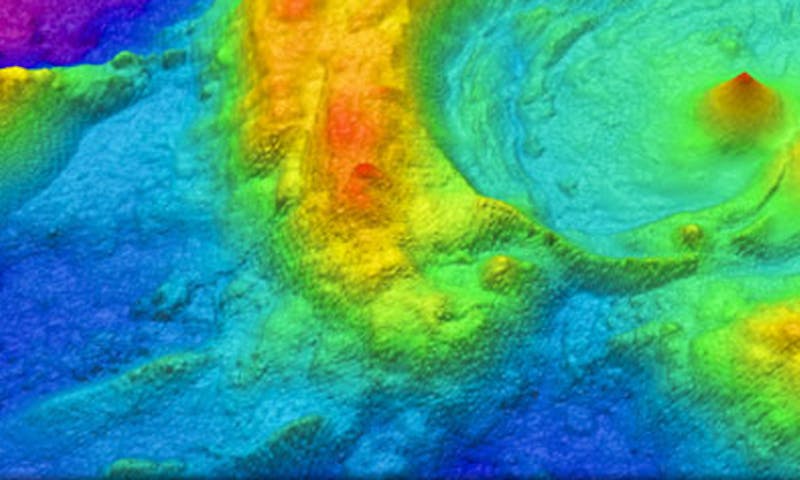 An underreported aspect of the climate crisis is that archaeological sites, cultural landscapes, biodiversity, and distributions of flora and fauna—much of which modern people will never even know about—are disappearing at an alarming rate. I’m an archaeologist, and while I don’t know how to solve the climate crisis, I do know what I want to contribute to our shared legacy: a comprehensive digital map of the surface of the planet and everything on it. Such a project will serve both as a record of the state of the planet as it exists now, to help scientists better understand how it is changing, and as a “virtual planet” that can serve as a precious gift for future generations.

In June, I and other like-minded scientists launched the Earth Archive: a massive scientific effort aiming to scan the entire solid surface of the planet, starting with the areas most threatened, at a resolution smaller than a meter. This effort aims to use lidar technology, or light detection and ranging technology, which can map both the vegetation and the ground beneath it in three dimensions from the vantage point of a plane, helicopter, or drone.

The notion of creating a digital Earth may not seem like a pressing issue. People tend to think of maps as static and unchanging, not ephemeral, time-sensitive things. But I disagree. Today there are still places where people haven’t had an impact for centuries, possibly ever. But things are changing fast.

Today 75 percent of the Earth’s land surface has been considerably altered by humans. From 1980 to 2000, 100 million hectares of tropical forest were razed to make room for cattle ranching, palm oil plantations, and more. These impacts are accelerating. Rising sea levels from climate change will make whole cities and countries unrecognizable.

As an archaeologist, this all feels very urgent to me in a way that it didn’t just a few decades ago. This mapping project must happen now, before the Earth changes even more dramatically and we lose much of our shared ecological and cultural patrimony.

There are still places where people haven’t had an impact for centuries, possibly ever.

Since the early 2000s, pioneering archaeologists, including me, have applied high-resolution lidar to document ancient sites and landscapes. Sometimes our success stories have garnered attention-grabbing headlines. I believe that scientists like us now have a moral and ethical responsibility to pay these developments forward by using this technology for a broader effort and goal: helping to preserve—and maybe save—the planet.

As archaeologists, we are trained to be time travelers: imagining the world as it existed in the past, seeing the world as it is today, and modeling change into the future. We are the ideal scientists to build an Earth Archive as a legacy for future generations.

Lidar is a truly astounding technology, arguably the basis of a real scientific revolution.

I first came across it during my research on the ancient Purépecha empire, a contemporary of the Aztec, in Michoacán, Mexico. (The Purépecha language is still spoken by over 100,000 people today.) My team was meticulously uncovering hundreds of building foundations in an ancient city; my job was to find the outer edges of the settlement so we would know how large it was. I set out, thinking it would take minutes. Hours later, I realized the seemingly small settlement was likely a sprawling metropolis. The enormity of the task ahead boggled my mind.

Back in Colorado in 2009, a colleague of mine told me about lidar. I could just afford a scan with the money left in my project budget, so we hired a company to fly a plane and do the work. Astonishingly, a 45-minute lidar scan collected about the same amount of data as what we could have obtained by hand—but over decades.

What lidar data provides is not a flat image but instead a dense, three-dimensional cloud of points recording the Earth’s surface and everything on it in incredible detail. Using computer software, researchers can filter the point cloud to identify features such as trees, geological fault lines, hydrological elements, and much more. Using 3D visualization technologies, researchers can actually walk through the resulting “point cloud.” It took me several months to learn to do what a colleague of mine calls “digital deforestation”: taking away the signal from vegetation in the data to reveal what lies beneath.

The results from that Mexico flight astounded me. The lidar scans revealed the remains of thousands of house foundations, roads, buildings (including pyramids), and agricultural terraces in high resolution. This moment changed not only our interpretations of the site but also the arc of my career.

Because traditional archaeological methodologies are so time intensive, the richest information that academics have about the past is limited to a handful of impressive case studies laboriously collected over decades by dedicated researchers. This means that there is much left to be explored. Wherever archaeologists point a lidar instrument—whether it’s around a known site or a completely unexplored region—we unveil amazing and previously undocumented finds. Our archaeological universe is going through its own big bang.

I was also part of a group of scientists who were lucky enough to venture into Honduras’ Mosquitia jungle in 2015 to field-check lidar results that showed an undocumented ancient city—a place that I started calling the City of the Jaguar. I have done archaeological fieldwork globally, but I was unprepared for the world that I entered when I stepped off the helicopter: a place that was completely disconnected from 21st-century technology and devoid of plastic and all traces of contemporary people. The animals in the area had no experience with people and so no reason to fear them.

Though I didn’t realize it at the time, entering this place had a significant impact on my worldview. I felt an immediate need to protect the site and other undocumented places. It underscored how little we know about so much of our planet and how much there is left to rediscover.

I returned a year later with a team of scientists to document and protect an ancient cache of objects that we had identified in 2015—a collection that we think people left behind when they ritually closed this important place at the time of its abandonment.

Shockingly, much had changed, in spite of the researchers’ desires to protect this magical place. Workers had cleared a landing zone for helicopters and constructed a camp for soldiers and scientists. Parts of the site had eroded away, animals no longer visited the camp in the same numbers, and to my dismay, there was now plastic littered about. The scan we took with lidar is now the only record of how this place looked just a few years earlier.

The media tends to focus on lidar as a great way of making modern discoveries—including sites that can make archaeological advances, like the City of the Jaguar. What is less recognized is that lidar also serves as an important record-keeping tool: a way of preserving a moment in time before human intervention or fire or rain wipes it away. And that, I think, may be its greatest use of all. Lidar records represent a great conservation tool.

Lidar scans preserve a moment in time before human intervention or fire or rain wipes it away.

In 2019, the world was saddened as the Notre Dame Cathedral burned. Fortunately, computer scientist Paul Blaer and art historian Andrew Tallon had taken lidar scans of the cathedral in 2010 in an effort to better understand the original construction of the building. Those lidar scans are now the most detailed record anyone has of the cathedral.

A nonprofit called CyArk has documented more than 200 historical sites using lidar—from a 5,000-year-old ancient settlement in Scotland named Skara Brae, to the Thomas Jefferson Memorial, to many cemeteries—since it was founded in 2003. This is a great start, but much more can be done.

A lidar scan of the entire land area of the planet is certainly a monumental task, but it is the best way, given current technologies, to preserve a record of the Earth. Today’s satellite and other imaging technologies cannot penetrate forests and vegetation to see things beneath. High-resolution spaceborne lidar instruments would make things easier, but those are at least 20 years away. We should not wait, knowing the rapid rate of planetary change.

So far, I would roughly estimate that less than 10 percent—maybe close to 1 percent—of the planet has been lidar scanned. The United States Geological Survey has undertaken a project called 3D Elevation Program (3DEP) that aims to lidar map all of the United States by 2023. So far, they have mapped 60 percent of the nation, and they estimate the entire project will cost $1 billion. The final altitude data is expected to help with everything from road construction projects to forest and water management, with industrial benefits of up to $13 billion. Similar projects have been started in a limited fashion in other nations, including Germany, the United Kingdom, other areas of Northern Europe, and beyond. These are complementary efforts that we hope to work with through the Earth Archive, although we would like scans with higher resolution than those currently being taken for 3DEP.

We are the ideal scientists to build an Earth Archive as a legacy for future generations.

Our team estimates that raw lidar scanning of the entire planet’s landmass could be done for about $5 billion, not including the costs of data analysis. We are setting up meetings now with different stakeholders, from ecologists to business leaders, to identify which areas should be prioritized: Candidate areas include tropical forests, coastlines, and Arctic regions. The Amazon, for example, could be scanned in five to six years for just over $15 million; we hope to start that specific project in February 2020, subject to funding.

Creating a baseline record of the Earth as it is today will have many benefits. It could be used to build a “virtual planet” accessible to anyone who wishes to explore both human-made and natural systems. It will provide a “before” dataset for people who aim to monitor the impacts of climate change on our planet, and to mitigate those impacts. And it will preserve a record of the Earth for many generations to come.

All those trees I scrub away from my own data are the basis for the careers of hundreds of other scientists who study forest composition, tree width and age, canopy height, hydrology, topology, and hundreds of other subjects. A record of natural landscapes would be hugely valuable to them. Future generations will have different technologies and tools at their disposal, and will want to ask different questions. No one knows exactly how they will use lidar data, but that data will surely be useful.

The forests, archaeological sites, and even the landscapes documented today may not exist in the future. But lidar records will persist and provide a legacy for future generations. That is what the Earth Archive is about—digitally documenting the Earth now, before things change even more radically, as a treasured gift to the future.

Chris Fisher is an archaeologist, National Geographic Explorer, and a professor of anthropology at Colorado State University. In 2007, he and his team first documented the ancient city of Angamuco, a sprawling metropolis that once had as many structures as modern-day Manhattan. His recent work uses remote sensing technologies, including LiDAR, to better understand urbanism & environmental change in Mexico and Honduras. As a child growing up in Duluth, Minnesota, he developed a love for wilderness canoeing, a passion that persists today.

This work first appeared on Sapiens. Read the original here.